As NASA continues to progress toward the debut flight of SLS in 2018, the agency is now examining additional secondary payloads to fly on the EM-1 mission. These secondary payloads will involve Cubesats designed to investigate lunar and human biology aspects of spaceflight as well as Near Earth Asteroid reconnaissance.

A major factor contributing to the decision to co-manifest small Cubesat payloads on the EM-1 (Exploration Mission -1) flight of SLS and Orion in 2018 stems from the identification of Strategic Knowledge Gaps (SKGs) that need to/should be addressed prior to undertaking human missions into the inner solar system.

Based on the identified SKGs, the HEOMD AES has chosen three concepts for further refinement toward inclusion on the EM-1 flight.

These three concepts include BioSential, Lunar Flashlight, and Near Earth Asteroid Scout.

All three were chosen from the same set of criteria: “Relevance to Space Exploration SKGs, life cycle cost, synergistic use of previously demonstrated technologies, and optimal use of available civil servant workforce.”

BioSential will specifically address the SKG relating to human health and performance in high radiation environments, notes the HEOMD AES presentation from 4 November 2015.

BioSential’s design will allow it to “Study radiation-induced DNA damage of live organisms in cislunar space” and “correlate [those] measurements” with other results gained from studies on the International Space Station and on Earth. 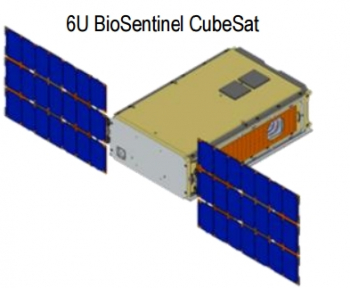 Specifically, BioSential will examine the effect of radiation in variable gravity environments – an aspect of radiation exposure that has not been systematically studied before.

To accomplish this, BioSential will use a radiation biosensor of yeast (a eukaryotic microorganism) to “gauge the genetic (DNA) damage and repair caused by space radiation” to a strain of yeast that responds to Double Strand Break, states the AES presentation.

In all, BioSential will be a 6U Cubesat with a 3U BioSensor and a 1U radiation spectrometer and dosimeter – with identical BioSential payloads for the Space Station and ground operations.

The entire BioSential payload will require less than 10 W of average power over the lifetime of the mission.

For Lunar Flashlight, the AES division selected this payload to address the SKG related to the pool of potential resources on the lunar surface – specifically, understanding the quantity and distribution of water and other volatiles in lunar cold traps.

As has become a major focus for NASA and other space companies looking to mount human expeditions to celestial bodies in the inner solar system, the use of in-situ resources has become a significant point of discussion.

In the case of the moon, the primary in-situ resource is water. 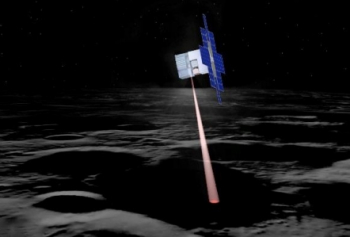 To this end, Lunar Flashlight will “Locate ice deposits in the Moon’s permanently shadowed craters” and will “identify favorable locations for in-situ utilization.”

In this way, Lunar Flashlight will follow-up on recent revelations regarding the presence of water ice in the moon’s permanently shadowed polar regions as well as anomalous reflectivity observations in lunar regions of “coldest year-round temperatures” that could very well be water frost.

Lunar Flashlight will conduct its mission through the use of four 50-75 watt pulsed Lasers that will “illuminate 1 square kilometer of the lunar surface and define the four spectral bands of interest” for the mission.

Onboard the spacecraft, a two-channel near Infrared spectrometer will then observe the detected spectral bands from 1-2mm at a lunar altitude of 20 kilometers.

Overall, this will require Lunar Flashlight to be a 6U Cubesat capable of producing a 290 m/s delta V through a green propellant system.

Thirdly, the AES division has selected a Near Earth Asteroid (NEA) scout mission to accompany SLS on her maiden voyage in order to investigate environmental elements surrounding an NEA. 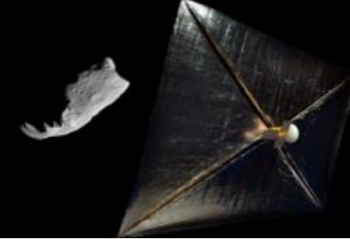 Specifically, the NEA scout mission is tasked with determining the size, rotational state, surface properties, and interaction environment of an NEA.

This will be accomplished via a flyby or rendezvous with and characterization of an NEA that is “representative of a potential human mission target,” notes the AES presentation.

Specifically, the NEA scout will have an 85 square meter solar sail which will allow it to target an NEA within 1 AU (Astronomical Unit – average one-orbit distance between the Sun and the Earth) of Earth. 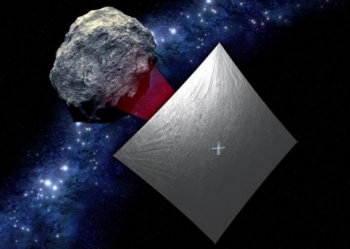 In fact, that 1 AU distance limitation is solely due to telecommunication limits and not the solar sail itself or the SLS rocket that it will hitch a ride with.

Moreover, this Cubesat will help demonstrate emerging Solar Sail technology and will demonstrate the HEOMD’s ability to perform low-cost reconnaissance missions with a 6U Cubesat.

In this way, NASA’s various divisions are working in tandem to deliver human missions to the Martian system in the 2030s and 2040s by utilizing small-class reconnaissance missions in conjunction with larger agency operations to leverage all of the assets available to the U.S. space agency.