Two new test stands are being constructed at the Marshall Space Flight Center, ready to “stress out” the Space Launch System (SLS). Test Stand 4697 and 4693 are both under construction, ready to receive all major elements of the monster rocket for structural testing. The 215-foot stand Test Stand 4693 is being built on the foundations of the Saturn V’s F-1 engine test stand.

The Space Launch System is scheduled to debut in 2018, providing NASA with a Super Heavy Lift Launch Vehicle option for the first time since the Saturn V.

However, before SLS is allowed to launch, the key elements of the rocket need to be tested to ensure they can withstand the stresses of ascent.

Facilitating that goal will be the Structural Test Articles (STA) of SLS, which are being fabricated via the new array of large machinery at the Michoud Assembly Facility (MAF) in New Orleans.

The STAs will be checked out at MAF before taking a ride on the revamped Pegasus Barge for the trip to the Marshall Space Flight Center (MSFC) in Alabama. 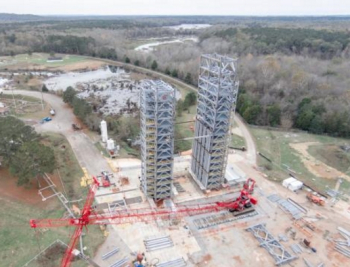 The goal will be to install specific elements – such as the Core Stage – on the test stand, ready for structural stressing.

An entire stacked SLS won’t be hosted on the stands.

The major elements include the Core Stage which is made up of the engine section, liquid hydrogen tank, intertank, liquid oxygen tank and forward skirt.

Test Stand 4693 – which will host the Core Stage elements – is being built via the guidance of the U.S. Army Corps of Engineers, which awarded a $45.3 million contract to Brasfield & Gorrie of Birmingham, Alabama. 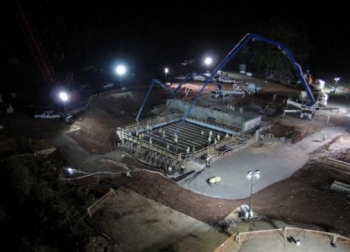 NASA and the Corps entered into an agreement for construction of the test facilities and NASA transferred funds to the Corps for this purpose.

The facilities were designed by a joint venture team of the architecture and engineering firms Goodwyn Mills and Cawood, of Montgomery, Alabama, and Merrick & Company of Greenwood Village, Colorado.

The reason the stand is being built at Marshall – and not the Stennis Space Center – relates to Marshall’s tradition with dynamic and static structural testing, along with some propulsion testing.

Stennis was always been dedicated as a propulsion test facility, set up originally to move the noise away from Huntsville’s population. 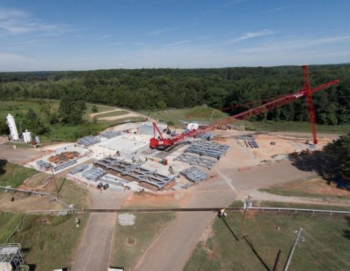 The foundations of the new test stand began construction last year, built on the site that was the former test stand for the F-1 engines of the Saturn V.

The 215-foot stand, with a twin-tower configuration, is being made with 2,150 tons of steel.

The steel arrived on site in the late Spring of this year, following delays via budgetary and redesign issues – with a related L2 note from the agency’s Human Exploration Operations Mission Directorate’s (HEOMD) speaking of transferring the “full $13.3M of the emergency op plan to MSFC for Test Stands 4693 and 4697” to help move the process along.

The steel also had to be pre-fabricated and welded in the shop prior to being shipped to MSFC for erection. 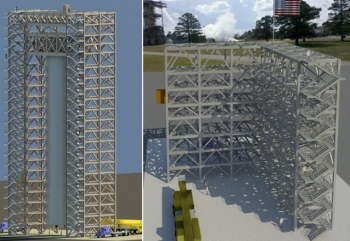 The large stand will be used for testing the liquid hydrogen tank, which will be 185 feet when completed. The tank will be placed in the stand vertically, and be loaded with liquid nitrogen for stress testing.

“These stands are necessary to accommodate the sheer size of the core stage components, and the extreme loads we are putting on them – some up to 9 million pounds,” noted Tim Gautney, element discipline lead engineer for SLS core stage testing.

“We will use hydraulic cylinders to push, pull, twist and bend these pieces to make sure they can withstand the loads and environments they may experience on the launch pad and upon ascent. 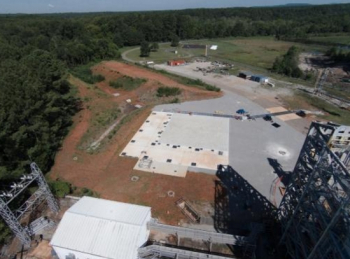 “The tests also will verify the models already in place that predict the amount of loads the core stage can endure.”

The second test stand, Test Stand 4697, is a 692-ton steel structure about nine stories high, or 85 feet. It will be used to test the liquid oxygen tank and forward skirt in Marshall’s West Test Area.

“Within the foundation of this stand, we have 1.75 miles of embedded anchor rods – that gives you an idea of the type of stability we need to test these parts with such high-level force,” added Byron Williams, project manager for the liquid oxygen tank and forward skirt test stand.

With Test Stand 4693 already rising out of the ground, Test Stand 4697 is expected to follow suit shortly, with the crane for the LOX Stand now assembled and proof loaded – and pre-assembly welding/framing has begun.

(Images: NASA and L2 – including construction updates and photos of test stands and pads relating to SLS and other new vehicles)