Russia has launched a new early warning system satellite called EKS-1 (EKS No.1) early on Tuesday. The launch of the satellite was conducted by the Soyuz 2-1B rocket with a Fregat-M upper stage, launching from the Plesetsk Cosmodrome in northern Russia, with a T-0 of 06:34 UTC.

The satellite is the first in a replacement constellation for its aging Early Warning System fleet, known as OKO (Russian for “Eye”).

OKO goes back to the Soviet era, a missile defense early warning program consisting of satellites in Molniya and geosynchronous orbits. 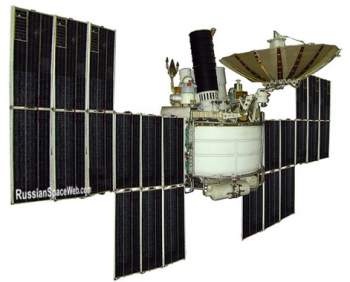 The system works by identifying launches of ballistic missiles by detection of their engines’ exhaust plume in infrared light.

The first OKO satellite was launched in 1972, with the system becoming operational in 1978 and fully utilized in the early 80s.

The aging system – and gaps in coverage due to failing satellites in the OKO constellation – has not impacted on the Russian capability, mainly in thanks to improvements to ground radar stations picking up the slack. However, replacement satellites have been in preparation for some time.

The path to the launch of EKS-1 (Unified Space System) has been ongoing for years, under the codename “product 14F142”. It will be classed as a direct replacement for OKO-1 and will be launched into a Tundra orbit – a highly elliptical orbit similar to a Molnya orbit.

The next generation nature of the satellite will mean it will be capable of picking up the jobs of around five or six of the old-fashioned OKO satellites, per comments made by a Ministry of Defense official to the TASS news agency. However, specific details about the spacecraft have not been revealed, due to the military nature of their role.

The launch was conducted by a Soyuz 2-1B rocket.

Soyuz-2-1 rocket is a descendent of the R-7 Semyorka, the world’s first intercontinental ballistic missile. The R-7 was designed by Sergei Korolev, and first flew in 1957. A modified version was used to launch the first satellite, Sputnik 1, on 4 October of that year.

The Soyuz-2 was developed from the older Soyuz models and features digital flight control systems and modernized engines. It first flew in 2004, and this is its twelfth launch.

Two variants are currently in service; the Soyuz-2-1A, and the Soyuz-2-1B. The latter variant was used for this launch, with the vehicle featuring an RD-0124 third stage engine, which provided additional thrust. The RD-0124 was declared operational on 3 May 2011.

A third configuration, the Soyuz-2-1v – which is also known as Soyuz-1 – uses an NK-33 engine to power the core stage and does away with the four boosters flown on all other Soyuz rockets.

The Soyuz-2 also forms the basis for the Soyuz-ST rocket, which flies from Kourou in French Guiana. The Soyuz-ST is optimized to fly from Kourou and also incorporates a flight termination system and a modified telemetry system.

An optional Fregat Upper Stage – powered by an S5.92 engine – uses unsymmetrical dimethylhydrazine as propellant and nitrogen tetroxide as an oxidizer.

(Images via Roscosmos and RussianSpaceWeb.com).