Kennedy Space Center’s iconic Vehicle Assembly Building (VAB) is continuing its preparations to host the Space Launch System (SLS) and commercial rockets, with modifications from the ground up. The revamp includes a modernization of its inner workings, including the fire suppression system – a key safety element for the massive building.

Ensuring humans and hardware are safe inside one of the largest buildings in the world is a challenge at the best of times, but the emphasis is increased when considering it is also the home of rockets being put through their final integration tasks ahead of launch.

A large amount of safety protocols have always been in place for the VAB. However, the end of the Shuttle Program marked an opportunity to modernize and transform the building – and its safety systems – ahead of its next role. 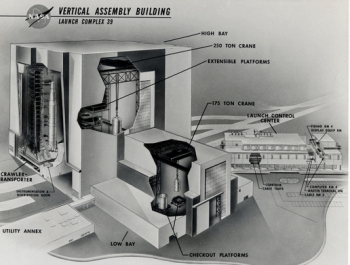 The launch vehicle integration facility was built in 1965 to support assembly of Apollo/Saturn vehicles and modified to support the Space Shuttle Program.

The iconic building still has the same appearance from the outside, but within its cavernous expanses work has been ongoing for some time to realign, remove and update its giant platforms, from being able to mate Shuttle hardware to one that can allow for the integration of the huge elements that make up SLS.

At present, only SLS has been confirmed for using the VAB. However, it is hoped commercial vehicles will take up space inside High Bay 2 (HB-2) – likely those aiming to launch from Pad 39C (within Pad 39B) – with interested parties told they need to register their interest by mid-2016.

Ensuring the rockets and workers remain safe inside the VAB involves numerous safety systems, not least the fire suppression system. 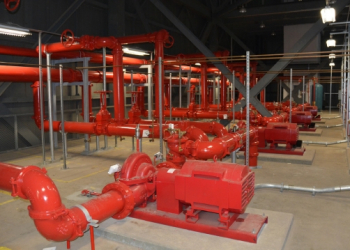 Ivey’s Construction is performing upgrades to the system, which includes new fire pumps, controllers and fire protection piping have been installed on level 20 of the VAB.

The company has had more than 50 people working on the fire suppression project alone, which began back in late 2013 when the company performed an evaluation of the VAB’s “Firex” system.

Ivey’s Construction was founded in 1973 by Wade Ivey and is now owned by his son, Kevin Ivey. Ivey’s is a small family business that is involved with a number of KSC projects.

Historically, Ivey’s performed construction work at KSC from as early as 1975, as NASA began to convert the center’s facilities from the Apollo Program to the Space Shuttle Program. 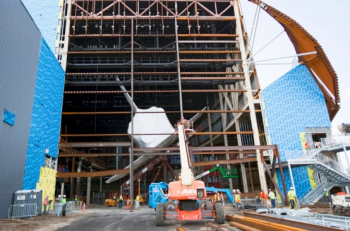 Over the years, the company has performed more than 1,000 new construction and construction renovation projects at Kennedy and Cape Canaveral Air Force Station.

“We had the great honor of transporting and installing space shuttle Atlantis in her new home at the Kennedy Space Center Visitor Complex,” Ivey said. “It just seems natural for Ivey’s to be involved in NASA’s future exploration missions.” 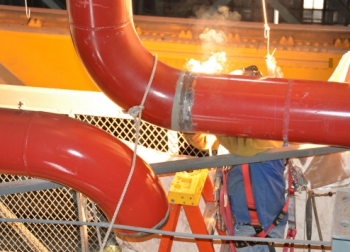 “The VAB is a very large and busy place,” Ivey added. “We’ve come up with some outside-the-box approaches to overcome the daily challenges for access to our work. Partnering among trades and coordinated efforts among contractors, subcontractors and NASA operations is vital for success.”

Ivey’s – which is a local company based at Merritt Island – is also performing work in other Kennedy facilities for GSDO, including Launch Complex 39B, the Launch Equipment Test Facility and the Operations and Checkout Building.

(Images via NASA and Ivey Construction)