NASA is nearly ready to begin testing of a core component of the Orion spacecraft. A structural test version of the European Service Module has arrived in the United States and will soon undergo a series of tests at NASA’s Glenn Research Center’s Space Power Facility in Sandusky, Ohio, to validate the service module’s design ahead of the EM-1 mission in 2018.

The European Service Module (ESM) currently onsite at the Space Power Facility (SPF) is a structural test article that will not be used in flight.

However, it is an important stepping stone in the forward path NASA is on toward the first flight of the heavy lift Space Launch System (SLS) rocket in 2018.

To this end, the ESM test article at the SPF will undergo a series of tests to evaluate the structural capabilities of the ESM design and look for any possible failures or issues before the first flight-ready module is produced.

Preparing for the series of tests on the ESM test article required the addition of new equipment and capabilities for the SPF.

According to Jerry Carek, SPF facility manager, “We added new facility capabilities for environmental testing over the last several years to meet the demands of validating the systems on the Orion ESM.”

These new capabilities will ensure the structural integrity of the ESM hardware to withstand the dynamic environment of launch atop the SLS rocket. 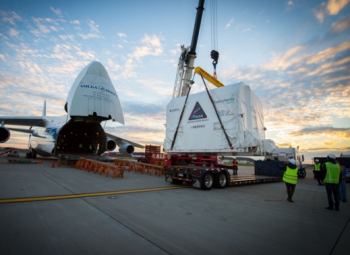 With the revamp of the SPF complete, the facility received the ESM test article on 9 November 2015 aboard an Antonov AN-124 from the European Space Agency (ESA) and its partners.

Now safely at the SPF, the ESM will undergo an initial series of tests – set to begin in February 2016 – focused on the deployment of the solar array wings to validate their design, specifically that they can fully unfurl and retract on command.

The solar arrays, when fully extended, span 18.9 meters (62 ft) and provide the electricity generation capability to power both the ESM and the Orion crew module. 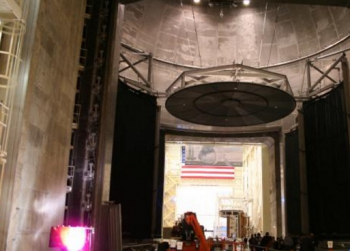 Following these tests, in the March to April 2016 timeframe, the ESM test article will be moved into the Reverberant Acoustic Test Facility (RATF), the world’s most powerful acoustic test chamber.

The RATF is capable of producing about 4 million watts of acoustic energy via thirty-six horns in the chamber producing up to 163 decibels with frequencies ranging from 20 to 10,000 Hz.

For the RATF tests, each component of the ESM will first be tested separately before the fully-integrated ESM will be tested against the noise equivalent of twenty jet engines to simulate the sound pressure and vibration conditions during launch.

Following this test, from May through July, the ESM test article will be moved to the brand new Mechanical Vibration Facility (MVF) – a 3 axis, 6 degrees of freedom shaker system that features a 6.7 m (21.98 ft) diameter aluminum test table with four horizontal and sixteen vertical hydraulic actuators. 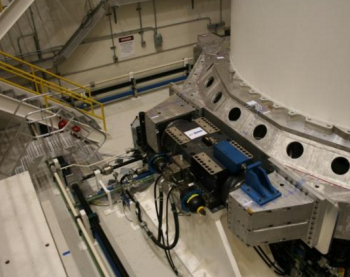 Part of the MVF is a large 8 inch thick steel plate that is attached to 5 million lbs of concrete, referred to as a seismic mass, that produces a vibration-stable foundation.

This portion of the facility is used to perform modal testing to determine the natural frequencies of a test article before transferring it to the MFV shaker system.

Currently, the MVF is occupied by Vibration Test Article 1 – a mass simulator of the Orion spacecraft stack – in order to evaluate the performance and calibration of the testing system. 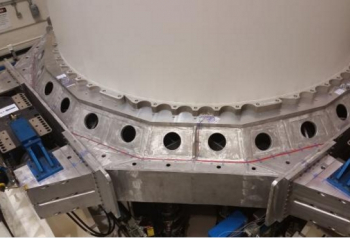 Once Vibration Test Article 1 is removed, the ESM test article will take its place in the MVF, where it will be put through a series of vibration tests that the spacecraft can expect from the rocket below during launch.

According to Robert Overy, chief engineer of the ESM Integration Office at NASA Glenn, “A series of repeated configuration tests will vibrate the stacked parts of the ESM from every possible angle. We want to push it past the extremes it might experience in the launch environment.”

Following MFV testing, in August 2016, another crucial test will be performed on the ESM’s three protective fairings built by Lockheed Martin. 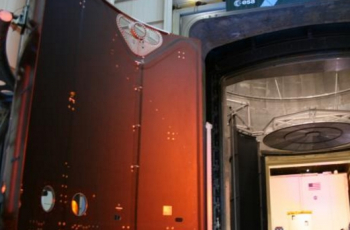 These fairings protect the service module during atmospheric flight and are later jettisoned by a series of pyrotechnics.

The performance of the pyrotechnics and the shock of the blasts will be evaluated by engineers at the SPF before the ESM test article moves to its final test: a pyro-shock test that will simulate the separation effects on the service module during spacecraft separation.

All of these tests are designed to validate every component and function of the ESM – which will, in full-flight mode, provide the functions necessary to facilitate crew survival on the Orion spacecraft.

Thus, rigorous testing of each of the ESM’s features is required to ensure that deep space missions can be completed safely. 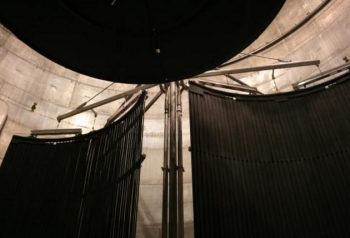 One notable test missing, however, is the thermal vacuum test.

These tests will be done on the EM-1 flight hardware during its round of testing in 2017.

During these tests, the fully integrated spacecraft will be put into the world’s largest vacuum chamber at the SPF and surrounded by 12.2 m (40 ft) diameter thermal shrouds.

These shrouds will circulate nitrogen gas throughout and can produce temperatures from -160° C to 60° C (-256° F to 140° F) and will be used to test the temperature control of the spacecraft.

The Orion spacecraft may experience these low and high temperatures at different parts of its mission.

Looking ahead to EM-1:

Overall, the ESM, built by Airbus Defense and Space, is the workhorse of the Orion spacecraft, providing propulsion, translation control, electrical production, water and air storage, and radiators for thermal control.

The Orion Crew Module (CM), however, will provide the brains of the spacecraft with the flight computers onboard to send commands to the ESM components. 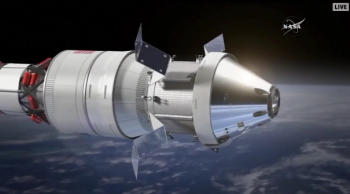 Current schedules have the ESM for Exploration Mission-1 (EM-1) arriving at the Kennedy Space Center (KSC) in Florida in January 2017 – over a year and a half before EM-1’s currently projected launch date.

Once at KSC, the ESM will be mated with the Orion CM before the mated duo are shipped via NASA’s Super Guppy cargo plane to the SPF for pre-flight tests beginning that Spring.

Following acceptance and final testing, the CM/ESM flight hardware will be shipped back to KSC for final vehicle processing in late 2017 ahead of the scheduled launch of the EM-1 mission in the latter half of 2018.

During the EM-1 test flight, Orion’s and the ESM’s systems will be put through a series of examinations on a flight that will take the crew-capable spacecraft over 40,000 miles beyond the moon, proving that this system is ready to take humankind further than ever before.

(Images: NASA, ESA and L2 – with photos from Cody Zoller)