Russia’s Proton-M launched on its seventh flight of the year Sunday morning, beginning a lengthy mission to deploy a Garpun military communications satellite. The rocket departed Baikonur at 06:19 local time (00:19 UTC) to begin a nine-hour journey to geostationary orbit that resulted in a successful deployment of the satellite.

Sunday’s launch carried Garpun No.12L, the second such spacecraft to be launched. Garpun replaces an earlier series of satellites, known as Potok or Geizer; ten of which were launched between 1982 and 2000. 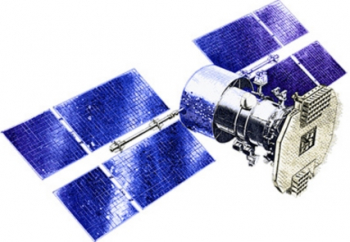 The Garpun constellation, like its predecessor, is designed to provide data relay capabilities for Russia’s fleet of reconnaissance satellites, such as the Persona electro-optical imaging spacecraft and Lotos-S signals intelligence vehicles. It fulfils the same function for Russia as the National Reconnaissance Office’s Quasar – or Satellite Data System (SDS) – satellites do for the United States.

The first Garpun satellite, No.11L, was successfully launched in September 2011. Placed into geostationary orbit, it is stationed over the equator to the south of India at a longitude of 79.8 degrees East. This was one of two stations previously used by Geizer satellites – along with a position off the west coast of Africa at 13.5 degrees West.

A third slot over the Pacific at 168 degrees West would have given the constellation global coverage, however no satellite was ever stationed there.

It is likely that Garpun No.12L will take up position at the 13.5 West slot. It is unclear whether an additional satellite will be deployed to complete the constellation.

Little is known about the Garpun satellites themselves other than that they are built by Reshetnev, the same design bureau – formerly named NPO PM – responsible for the earlier Geizer series. The satellites are manufactured in Zheleznogorsk before being flown to Baikonur for launch.

Reshetnev also manufactured the Luch relay satellites which Roskosmos use to relay communications for scientific missions, Soyuz and Progress spacecraft and the Russian Orbital Segment of the International Space Station. The Luch 5A and 5V spacecraft launched in 2011 and 2014 respectively were 1,150-kilogram (3,540 lb) satellites based on the Ekspress-1000 bus.

In addition to the two Luch 5 satellites Reshetnev were tasked with the development of a larger relay spacecraft, using the Ekspress-2000 bus, which was commissioned as Luch 4 but has since been renamed Yenisey-A1. This is reportedly a communications technology development mission and is slated for launch in 2019.

It is likely that Garpun lacks an apogee motor, as the previous launch saw the satellite deployed directly into geostationary orbit. In all probability the same flightplan was followed duringh Sunday’s launch, with the Briz-M upper stage making three burns to attain this orbit before deploying its cargo. 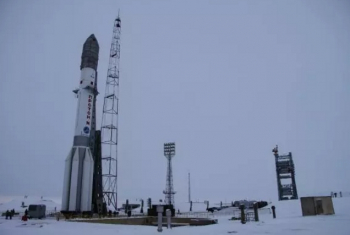 The Garpun launch used an unusual Proton configuration, consisting of a Phase I Enhanced Proton-M, but with the first stage re-engined to use the RD-276 introduced with the Phase II enhancements.

The enhanced Proton-M configurations have been part of a system of continual upgrades since the type’s introduction in 2001.

The Phase I modifications were brought in from the fourth Proton-M launch in 2004, with the Phase II making its debut in 2007 and the Phase III in 2009. The Phase III is the version currently used for most launches, although the next upgrade, Phase IV, is expected to be introduced in the near future.

Proton-M is based on the UR-500 rocket that was originally developed as a missile in the 1960s. Too big to be of practical military use, a third stage was added to the rocket to make the Proton-K, which served the Soviet Union and subsequently Russia between 1967 and 2012. The modernised Proton-M is expected to remain in service until the mid-late 2020s, when it will be replaced by Angara. 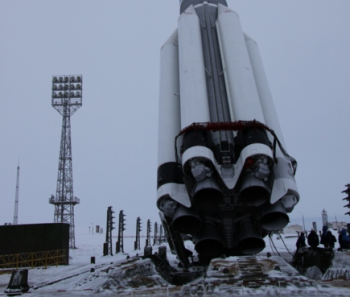 The Proton-M’s first stage was powered by six RD-276 engines, burning unsymmetrical dimethylhydrazine (UDMH) propellant oxidised by dinitrogen tetroxide (N2O2). The stage consisted of a central tank for the oxidiser, with six externally mounted propellant tanks which can be detached to aid transporting the stage before launch. The engines were located at the base of these six units.

The rocket’s second stage is powered by four RD-0210 engines, which also used UDMH and N2O2 propellant, as did the third and fourth stages – propelled by single RD-0212 and S5.92 engines respectively.

The fourth stage of the rocket, the Briz-M, consists of a core propulsion module with a toroidal drop tank around it to carry additional propellant. 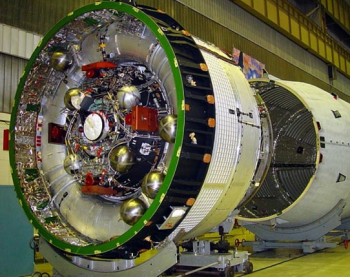 Capable of making multiple burns, it is the Briz-M which carried Garpun from the suborbital trajectory that the Proton’s first three stage left it on into its geostationary orbit.

Based on reports around the time of the previous Garpun launch, the Briz-M will was to make three burns prior to spacecraft separation, with another burn after Garpun was deployed to clear itself from geostationary orbit.

Garpun is expected to separate from the Briz-M around nine hours after launch, with confirmation noted on Sunday afternoon.

Sunday’s launch took place from the Baikonur Cosmodrome in Kazakhstan, using Pad 24 of Site 81 at the Cosmodrome. Baikonur has two Proton launch complexes, Sites 81 and 200, both of which originally consisted of two pads. 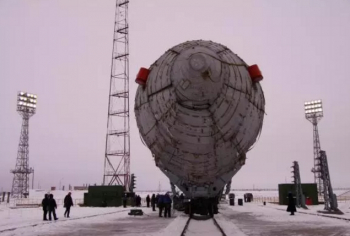 Site 200/39 is typically used for commercial launches by International Launch Services with Site 81/24 being used for military payloads, however there have been many cases of exceptions to this rule. Of the other two pads, Site 200/40 has been decommissioned and Site 81/23 has not been used since 2004.

The launch had originally been scheduled for earlier in the week, however it was delayed after the failure of a Soyuz-2-1v to deploy the Kanopus-ST satellite last week.

During that flight the Soyuz reached its planned orbit, but failed to release its primary payload and subsequently attempted a deorbit burn with the satellite still attached. Although it did not completely deorbit itself, the upper stage and payload decayed from orbit within a few days of launch, while a small secondary payload was deployed successfully.

The Proton launch was delayed to allow checks on its payload attachment and separation devices due to concerns of similarities between them and the device used on the Soyuz.

Sunday’s launch was the seventy ninth orbital launch attempt of 2015 and the seventh Proton launch of the year. Five of the six previous launches were successful, with May’s launch of Mexsat-1 failing to achieve orbit. Proton has had eleven failures in the last ten years, with 2009 the only year since 2005 in which it has not suffered at least one anomaly.

The next Proton launch is scheduled for 23 December, with another Proton-M/Briz-M carrying the Ekspress-AMU1 communications satellite. Details of any future Garpun launches are not available.

(Images via Roscosmos and space.skyrocket.de)