A Russian Government Proton-M was action on Thursday, lofting the Ekspress AMU1 communications satellite on what was a multi-hour flight to a geostationary orbit via its Briz-M Upper Stage. The Russian workhorse launched from its traditional home at the Baikonur Cosmodrome in Kazakhstan at 21:31 UTC.

The Proton booster tasked with carrying the satellite into space is 4.1 m (13.5 ft) in diameter along its second and third stages, with a first stage diameter of 7.4 m (24.3 ft). 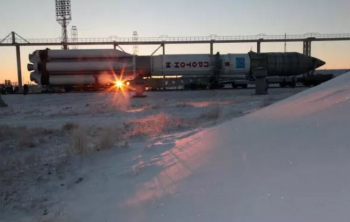 While it has suffered its share of failures, the Proton vehicle has a long heritage of over 400 launches since 1965 and is built by Khrunichev Research and State Production Center, one of the pillars of the global space industry and the majority owner of ILS. 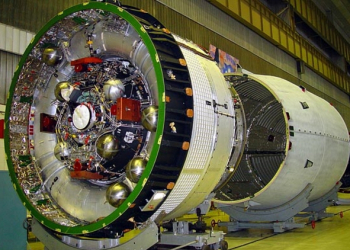 The launch date had suffered from delays, including a scrub at around T-30 minutes on Wednesday due to high upper level winds.

Airbus Defence and Space built the satellite under contract from the Russian Satellite Communications Company (RSCC).

Express AMU1 – or EUTELSAT 36C as it is also known – will provide follow-on and expansion capacity for the EUTELSAT 36A broadcast satellite operating at 36° East. 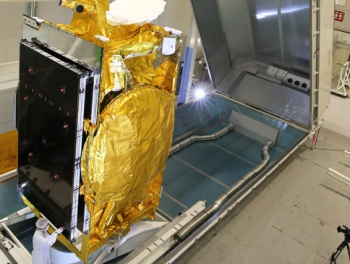 The Eurostar E3000 spacecraft is a state-of-the-art high-capacity satellite with up to 70 transponders. It will provide coverage for broadcast services in the European part of the Russian Federation in Ku and Ka bands, and ensure service continuity and growth for broadcast markets developed by Eutelsat in sub-Saharan Africa.

Express AMU1 is the 70th satellite of the Eurostar series.

Based on Airbus Defence and Space’s highly reliable Eurostar E3000 platform, Express AMU1/EUTELSAT 36C has a launch mass of 5,700 kg and a spacecraft power in excess of 15 kW. Its design lifetime is 15 years in orbit.

(Images via Roscosmos and Airbus Defence and Space).