Space exploration in 2015 was an unprecedented series of firsts and major achievements. But for NASA and the world’s space communities, nothing quite captured the spirit and excitement of exploration more than the heralded exploration of Pluto and the detection of the first Earth-like exoplanet orbiting a Sun-like star.

Year In Review Part 1 – Pluto and its moons:

It took 38 years, but 14 July 2015 finally brought to conclusion NASA’s Grand Tour of the solar system begun by the Voyager 1 and Voyager 2 spacecraft in 1977.

The two crafts together visited all four of the gas and ice giants of the outer solar system, but scientific observations of Titan as well as Uranus and Neptune precluded a visit by either of the spacecraft to the tiny little world on the outer edge of the solar system: Pluto. 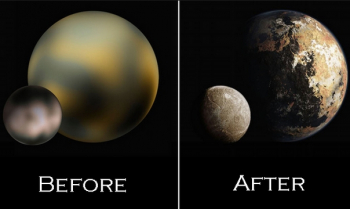 In 2006, NASA set out to explore the Kuiper Belt Object (KBO), and 2015 saw the much anticipated close encounter by the New Horizons spacecraft of Pluto and its five moons.

The nerve wracking close encounter sequence was executed by New Horizons’ onboard computer during an autonomous flight sequence that saw the spacecraft out of communications with controllers on Earth.

It was not until just over 13 hours after the time of closest approach to Pluto that the “I’m Alive and did science” signal transmitted from New Horizons 4.5 hours earlier finally reached Earth to the joy and celebration of the control and science teams. 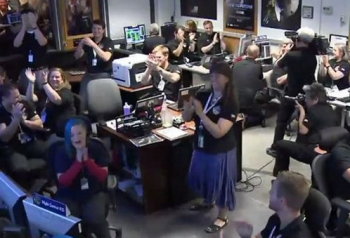 And the discoveries made by New Horizons stunned nearly everyone.

The first round of scientific observations released by the New Horizons team were reported by NASASpaceflight.com in September.

Since then, New Horizons has continued to send back a treasure trove of data regarding the dwarf planet and its five moons. 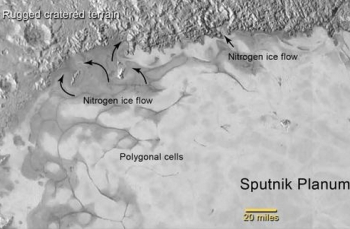 Additionally, Sputnik Planum was revealed to be pockmarked with pits and low ridges along with scalloped terrain possibly caused by ices susceptible to sublimation and formation. 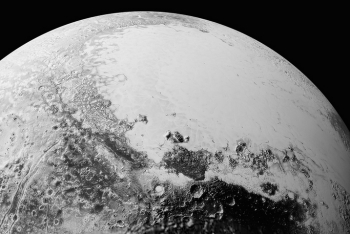 Even more revealing about Pluto’s vastly different terrain was the revelation of the apparent clumping of methane in Sputnik Planum while other regions, such as Cthulhu Reggio and the western mountains flanking Sputnik Planum, have no methane at all.

These methane clumps correspond to higher concentrations of observed methane on bright planes and crater rims while the center of craters and darker regions on the surface are virtually methane free.

“We’re unsure why this is so,” said Will Grundy, New Horizons surface composition team lead. “But the cool thing is that New Horizons has the ability to make exquisite compositional maps across the surface of Pluto, and that’ll be crucial to resolving how enigmatic Pluto works.” 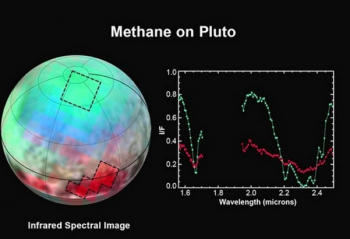 But varying distributions of methane and surface features were not the only major discoveries Pluto had to give before the end of the year.

In what has always been a major aspect of planetary exploration and one that has quickly turned from theory to proven fact many times over in recent years, New Horizons returned yet more concrete evidence of the presence of water ice on bodies other than Earth.

A curious aspect of the detection of water ice on Pluto’s surface, though, is that the areas showing the most obvious water ice spectral signatures correspond to areas that are bright red.

“I’m surprised that this water ice is so red,” said Silvia Protopapa, a science team member. “We don’t yet understand the relationship between water ice and the reddish tholin colorants on Pluto’s surface.” 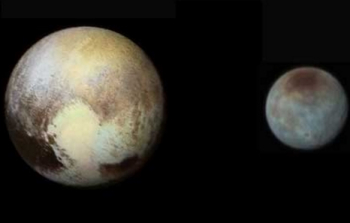 Pluto’s moons have also revealed unique and surprising discoveries, especially Charon, which is now understood to be a surprisingly complex world with a very violent history.

At half the diameter of Pluto, Charon is the largest satellite relative to its host planet in the Solar System.

Prior to the New Horizons flyby, Charon was thought to be a monotonous, crater-battered world but has instead been shown to have a landscape covered with mountains, canyons, landslides, and surface color variations.

In fact, the greatest canyon system on Charon stretches more than 1,600 km (1,000 miles), four times as long as the Grand Canyon and twice as deep in places – indicating a titanic geological upheaval in Charon’s past. 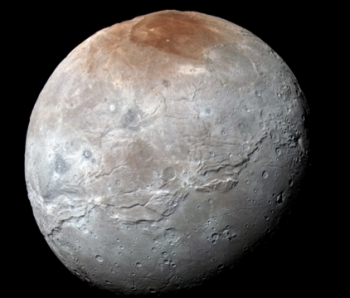 “It looks like the entire crust of Charon has been split open,” said John Spencer, deputy lead for GGI. “With respect to its size relative to Charon, this feature is much like the vast Valles Marineris canyon system on Mars.”

Moreover, a smooth area – informally named Vulcan Planum, following a concerted effort by the New Horizons team to name the various regions of Charon after iconic science fiction franchises – south of the great canyon was shown to have fewer large craters then regions to the north.

This would indicate that the Vulcan Planum is significantly younger than Charon’s northern topography and also provides clear evidence of a wide-scale, recent resurfacing event – possibly by cryovolcanism. 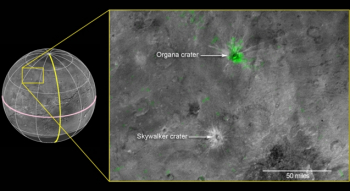 Surprisingly, Organa is abundantly rich in frozen ammonia, something that is so far unique to that crater on Charon.

“We have various ideas when it comes to the ammonia in Organa,” stated Will Gundy. “The crater could be younger, or perhaps the impact that created it hit a pocket of ammonia-rich subsurface ice.  Alternatively, maybe Organa’s impactor delivered its own ammonia.” 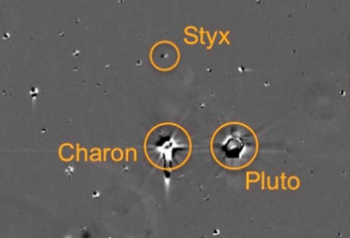 Moreover, by early October, New Horizons had transmitted back images of the faintest of Pluto’s five moons, Styx.

From a distance of 631,000 km (391,000 miles), Styx still appeared as a low-resolution, blurry image in New Horizons’ powerful LORRI camera.

“Although it may not look like much, the new composite image of Styx reveals a highly-elongated satellite, roughly 7.5 km (4.5 miles) across and 5 km (3 miles) long,” said Hal Weaver, New Horizons Project Scientist.

The images, blurry as they were, were enough for scientists to understand that the tiny moon has a highly reflective, icy surface similar to what was previously found for two of Pluto’s other small moons, Nix and Hydra. 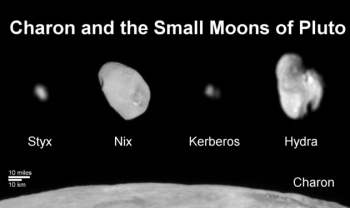 Finally, by late October, the fifth and final Plutonian moon to be observed, Kerberos, was finally revealed in newly downlinked images.

This new understanding of Kerberos’ actual size is somewhat surprising as previous research conducted by the Hubble Space Telescope assumed that Kerberos, because of its strong interaction with its neighboring moons, was relatively large and massive and only appeared faint because its surface was covered with dark material. 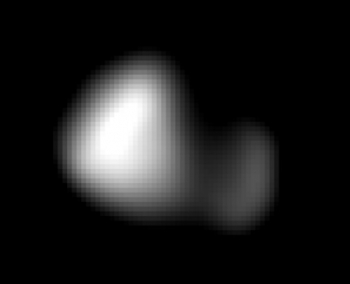 But the new, up-close observations from New Horizons show that Kerberos is actually a small, brightly-surfaced moon, indicating that the initial assessment is incorrect for reasons that are not yet understood.

“Our predictions were nearly spot-on for the other small moons, but not for Kerberos,” said New Horizons co-investigator Mark Showalter, with Hal Weaver adding that “Once again, the Pluto system has surprised us.”

Currently, with over 11 months of data downlink from New Horizons still pending, scientists will be able to learn even more about this mysterious dwarf planet at the outer reaches of the solar system.

For centuries, scientists understood that it was impractical and statistically impossible that our solar system was the only one to harbor planets.

However, proving that other worlds actually existed was a technological impossibility for centuries until ground- and space-based telescopes finally became powerful enough to detect these other worlds via two tried and true methods of detection: transit and radial velocity.

The first exoplanet was finally discovered in 1992. 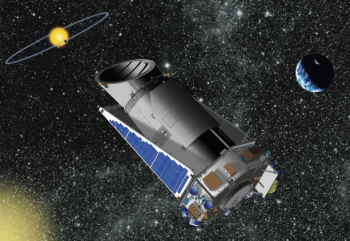 From there, the list of confirmed exoplanets grew slowly until the launch of NASA’s Kepler Space Telescope in 2009 and a concerted effort to increase the capability of ground-based telescopes to make the minute observations of distant stars needed to detect exoplanets.

From 1992 to 2009, the total number of confirmed exoplanets stood at just a few dozen.

Following the launch of Kepler, that number skyrocketed to 1,056 planets in 802 planetary systems, 175 of those being multiple-planet systems by the end of 2013.

As of 17 December 2015, according to NASA, the total number of confirmed exoplanets now stands at 1,918 planets across 1,288 planetary systems with 479 multiple planet systems discovered – and an outstanding 4,696 additional exoplanet candidates identified by Kepler still awaiting confirmation. 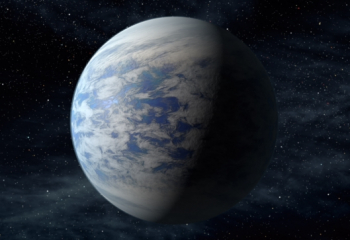 With these discoveries come additional “Earth-like” exoplanets that orbit inside their parent star’s habitable zone – an orbital distance at which a terrestrial planet is capable of supporting liquid water.

But almost all of the Earth-like planets yet discovered orbit red dwarf stars, stars that are much smaller than and very different from the Sun.

The quest to find an Earth-like planet orbiting a Sun-like, G-type star continued to remain elusive.

But that all changed on 23 July 2015 when NASA announced the discovery of Kepler-452b – a potentially rocky super-Earth planet orbiting a Sun-like star completely inside that star’s habitable zone. 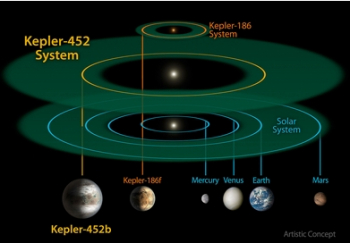 The discovery of Kepler-452b in a planetary system approximately 1,400 light years distance in the constellation Cygnus represented the first potentially rocky super-Earth planet around a star very similar to the Sun – a Type G2 Main Sequence star.

Numerous observations of Kepler-452b (its name derived from its parent star’s astronomical designation, Kepler 452, with a lowercase “b” indicating that it is the first planet discovered orbiting that star) revealed that the exoplanet takes 385 Earth-days to orbit its star – compared to Earth’s 365.25 day orbit of the Sun. 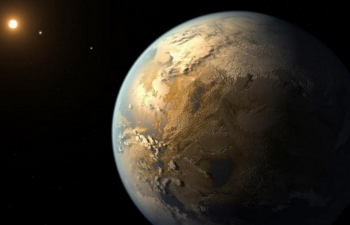 The planet is 1.6 times the size of Earth and 5 times Earth’ mass – meaning that if Kepler-452b is terrestrial, its surface gravity would be twice that of Earth’s sea-level.

But whether Kepler-452b is terrestrial is still unknown.

Scientists think there’s a “better than even chance” that Kepler-452b is terrestrial. But it could also be a small Neptune-like planet. 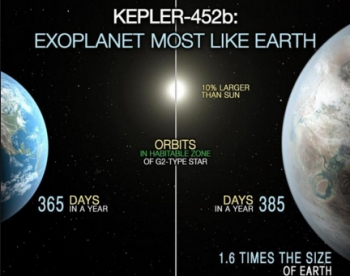 Confirmation of the planet’s composition will come with additional observations.

However, even if the planet is terrestrial, the odds of it supporting life as we understand it would appear to be stacked against it due to the fact that its parent star is 1.5 billion years older than the Sun.

Therefore, at this point in a Type G2 star’s evolution and at Kepler-452b’s distance from its star, the planet would be receiving 10% more energy than Earth currently receives.

Thus, if Kepler-452b is terrestrial, it’s likely experiencing or very close to experiencing a runaway greenhouse effect, like Venus.

Nonetheless, unlike all other terrestrial exoplanets discovered so far around much smaller, dimmer stars, we now have concrete proof that Earth-sized planets are indeed located in the habitable zones of Type G2 Main Sequence stars.

(Images via NASA and NASA JPL).