The NPOESS Preparatory Project (Suomi) and the Landsat-8 satellites have been keeping a close eye on the major snowstorm that impacted millions of Americans over the weekend.  NPP provided the stunning overhead images of the huge blanket of snow that covered the East Coast, while Landsat-8 took detailed photos of snow covered cities.

As Americans dig their way out of the record snowfall that covered numerous states over the weekend, views from space provided stunning imagery of the huge area of the East Coast that was impacted by the blizzards.

Most of the initial imagery used by news outlets came from the National Polar-orbiting Operational Environmental Satellite System (NPOESS) – named “Suomi” – which has been working on orbit for over four years. 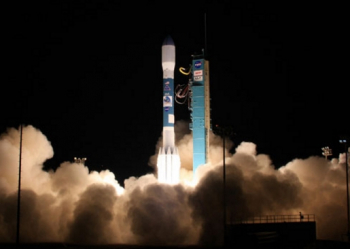 Launched in late October 2011, NPP was lofted uphill by a Delta II rocket, flying from Space Launch Complex 2W at the Vandenberg Air Force Base in California. The rocket, Delta 357, was the 151st Delta II to be launched and flew in the Delta II 7920-10C configuration.

At the time it was feared this was the final Delta II launch, prior to a stay of execution.

The following month saw the satellite enter service, after overcoming a few minor issues and enjoying the successful initial activation of the NPP satellite’s instruments. The spacecraft then raised its orbit. 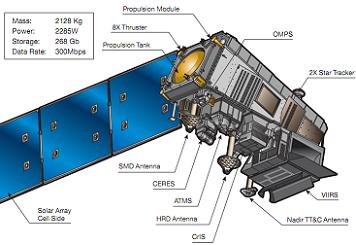 The NPP team activated three of the five science instruments on NPP, and the spacecraft as a whole was reported to be functioning nominally.

During initial activation of the VIIRS instrument, however, an indication of a “single software overrun processing error” was reported.  The status update quickly noted that “A few errors of this type were observed during NPP Compatibility Test Part 1 and Satellite T/V and have no impact on VIIRS performance.”

Known as the Visible Infrared Imaging Radiometer Suite, VIIRS is the instrument that provided the main bulk of the snowstorm imagery over the weekend. 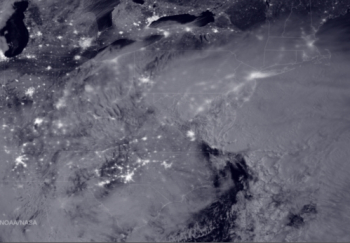 The NOAA (National Oceanic and Atmospheric Administration) published a series of photos taken by NPP Suomi’s VIIRS instrument, with the Day-Night band photo on January 22 showing the blizzard as it began to arrive over the east coast States.

The night pass also highlighted the bright light of the major cities, with a second – this time day pass – showing imagery of the snow on the ground as of late on Sunday.

NPP had only recently been tasked with taking images of Subtropical Storm Alex earlier in the month. 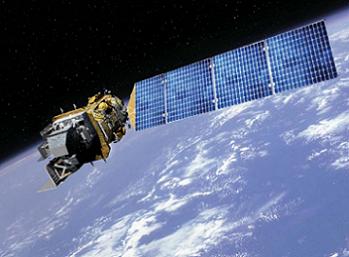 More dramatic images were published on Monday, via the Operational Land Imager (OLI) on Landsat 8, which captured a natural-color image of Virginia, Maryland, and Washington, D.C.

LDCM is a joint NASA and US Geological Survey mission and is the eighth satellite in the Landsat series, which began in 1972. 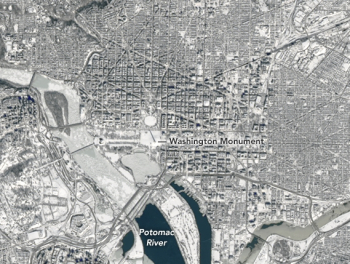 One is designed to support monitoring of coastal waters and the other to detect previously hard to see cirrus clouds that can otherwise unknowingly impact the signal from the Earth’s surface in the other spectral bands.

Its images published on Monday showed the detail it can produce, with streets and landmarks covered in snow. The images were taken from its Sun-synchronous orbit over 400 miles up.

Despite their continuous use in monitoring the weather, the importance of Earth Observation satellites has been shown on multiple occasions during major weather events.