Orbital ATK prepares for OA-6 Cygnus prior to Antares return

While the OA-4 Cygnus enjoys the berthed phase of her mission, Orbital ATK managers are already deep into parallel planning work with the Cygnus cargo resupply flight. The OA-6 Cygnus will also fly on the United Launch Alliance Atlas V, ahead of the company’s long-awaited transition back to its own upgraded Antares rocket.

Orbital ATK’s next mission under the Commercial Resupply Services (CRS) contract with NASA is currently scheduled for March 2016.

Designated OA-6, another Enhanced Cygnus will ride on the Atlas V launch vehicle from Launch Complex 41 (LC-41) at the Cape Canaveral Air Force Station (CCAFS), following closely in the footsteps of the recent debut success that saw the first Cygnus to hitch a ride with the ULA rocket. 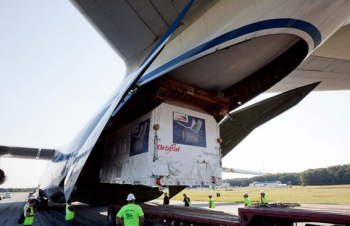 “We have our pre-ship (review) with our service module the second week of January and right around January 25th we should arrive down here (Florida).”

After the Cygnus hardware arrives, Orbital ATK, ULA, and NASA workers will largely repeat the processing steps that the OA-4 spacecraft went through. The modules will once again be processed for flight in KSC’s Space Station Processing Facility (SSPF).

Cygnus will then be rotated back to horizontal for late loading of remaining cargo into the PCM before being returned to vertical for encapsulation in the Atlas payload fairing.

The encapsulated spacecraft will then be transported from the PHSF out to the Vertical Integration Facility (VIF) at LC-41 for mating with the Atlas.

In parallel with spacecraft processing and launch operations at the Cape, Orbital ATK is also working to return its Antares launch vehicle to flight in the Spring from the Mid-Atlantic Regional Spaceport (MARS), located at NASA Wallops Flight Facility in Virginia.

Following the loss of the CRS-3 mission in a mishap at Wallops in October 2014, Orbital ATK decided to re-engine the first stage of the launch vehicle with RD-181 engines from NPO Energomash, replacing the Aerojet AJ-26 engines that were previously used. 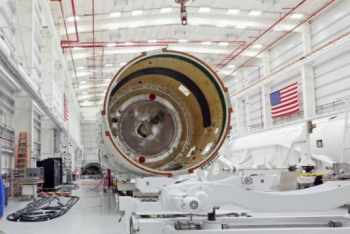 The new vehicle configuration is designated as the Antares 200 series; currently targeted for May, the return to flight launch of the vehicle in its 230 configuration will carry a Cygnus spacecraft from MARS Pad 0A into orbit on the OA-5 mission to the ISS. 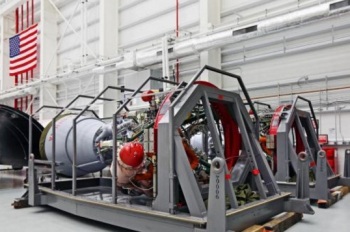 “We received our first two flight engines in July and we already had the core (the first stage) and we modified it in place at Wallops to accommodate the new engines. There’s a new thrust frame and then new feedlines and those are really the major components that changed.

“(Also) those engines are now mounted to the thrust frame on the back of the core and there are feedlines connecting the two and so we’re going through checks.”

Prior to the first launch of the 200 series vehicle, a hot-fire of the first modified Antares first stage will be performed at Pad 0A.

“Right now, we have Orbital ATK avionics controlling the engine valves and the thrust vector control actuators and so on,” Eberly added. “So it’s a lot of electrical checkout, there’s a ton of sensors that need to be verified – we’re kind of in an electrical and hydraulic testing phase right now. 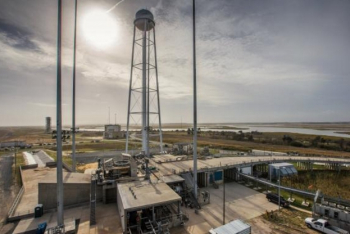 Roll out to the pad is slated for mid-February and then stage test would be (around) the second week of March, but that’s subject to change.”

Once the first stage test article is out at the pad, a series of tests will be conducted prior to the hot-fire test.

“About 10 days before (the hot-fire), we going to run the automated sequence right up to ignition and stop right before ignition,” Eberly noted. “It’s a little bit different because it’s just the first stage.

“We’ll have an upper stack simulator and put the flight computer down in a vault underneath the pad and run an Ethernet cable up to the control boxes on the first stage, like we did the first time around.” 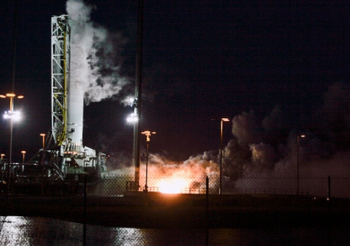 The hot-fire of the two engines would last about half a minute and put the new engines through their paces.

“Right now we’re thinking about 32 seconds of firing, we’ll hit all three power levels that we plan to use in flight (and) we’ll steer the nozzles during the test.

“It’s very similar to what we did in February 2013, prior to our first launch. So we really see it as a design validation test and we intend to do it this one time prior to the OA-5 flight.”

In parallel with the work to be conducted with the hot-fire test on the pad, the hardware that will fly the OA-5 will be processed for its launch. However, the tested first stage won’t be the rocket to loft that Cygnus.

“The OA-5 flight is going to use a different set of hardware and we just received those cores – the stage one core, which is the tank set and the airframe. We received two of those on a ship from Ukraine – (KB) Yuzhnoye and Yuzhmash build those for us. So now we have three cores at Wallops and that second core is going to be used for OA-5,” Eberly added. 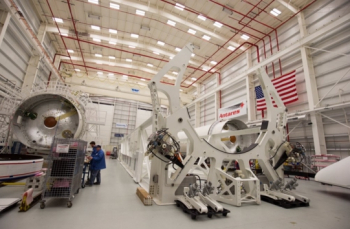 “We started the receiving and inspection process on that and so we’ll have a parallel operation where we’ll be building up the stage test article in parallel with processing for OA-5.”

The engines for OA-5 arrived on an airplane to Dulles from Energomash and transported by truck down to Wallops.

Along with the thrust frame and the feedlines, all the major elements of the first stage for OA-5 were expected to be together by the time of this article’s publication.

After the hot-fire, the first stage used for the test will be recycled for the second Antares 200 launch on the OA-7 CRS mission, currently scheduled for launch in October. 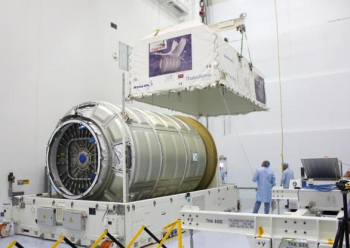 The Enhanced Cygnus spacecraft for the OA-5 flight will also be processed to be ready to support a May target date.

“We go to do our pre-ship inspections of that PCM, so that PCM is just getting completed with its final mods,” Hastman explained.

“We (scheduled) a pre-ship review over in Italy in December and that’ll ship out probably mid to late January to go to Wallops.

“The service module, we typically try to get there about forty days prior to the launch time. That particular service module is pretty much ready to go, so it’s just a matter of when we pull it out of storage, check it out, and ship it to the launch site.”

Year In Review, Part 4: SpaceX and Orbital ATK recover and succeed in 2015