United Launch Alliance successfully launched its Atlas V carrying the twelfth and final Block IIF GPS satellite Friday. Flying from Cape Canaveral, the rocket lifted off – despite weather-related challenges during the countdown – with her GPS IIF-12 spacecraft at 08:38 local time (13:38 UTC), the opening of what was a nineteen-minute window.

Initiated to provide precise location and navigational data to the US military, the GPS constellation is used worldwide for both civil and military purposes – and although Russia and China have developed their own global navigation systems in the GLONASS and Beidou constellations, with Europe continuing to develop its Galileo system, the majority of satellite navigation receivers rely upon GPS satellites. 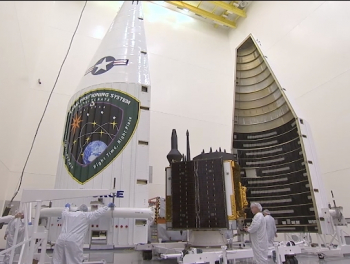 Block IIF represents the final replenishment of the second-generation GPS constellation, with Friday’s payload, GPS IIF-12, the seventy-third GPS satellite to fly and the sixty-second member of Block II.

The first Block II satellite launched on 14 February 1989, aboard the maiden flight of the Delta II rocket which would carry out a further forty-eight GPS missions over the following twenty-one years.

Block II was the first operational form of the Global Positioning System – the eleven Block I satellites launched by Atlas-E/F rockets between 1978 and 1985 were experimental spacecraft which paved the way for full deployment. The original Block II spacecraft – of which nine were launched – were 1,660-kilogram (3,660 lb) vehicles built by Rockwell.

Designed for seven and a half years of service, all nine launches took place between February 1989 and December 1990 using Delta II 6925-9.5 rockets.

The Block II was superseded by the enhanced Block IIA spacecraft, which were also produced by Rockwell and derived from the earlier satellites. Heavier, at a mass of 1,816 kg (4,004 lb), the spacecraft were able to operate and maintain accurate navigation signals without input from the ground for up to 180 days – increased from the fortnight that earlier satellites had been able to function for autonomously.

Between the Block II and IIA vehicles, Rockwell completed a contract for the initial 28-satellite GPS constellation.

The first Block IIA satellite, USA-66, was the longest-lived spacecraft in the constellation achieving over 25 years of service. Launched atop Delta 200, the first flight of the 7000-series Delta II in November 1990, it was only retired from service on 25 January to make room in the constellation for the new spacecraft carried by Friday’s launch. As well as the first to launch, USA-66 was the final Block IIA satellite in service at the time of its decommissioning last Monday. 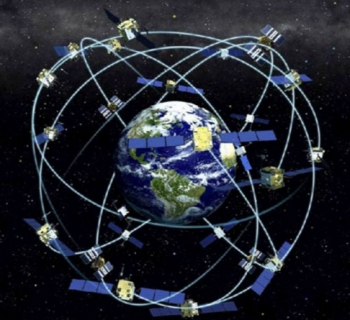 With the initial GPS constellation nearing completion, in 1997 the US Air Force began to launch Block II Replenishment, or Block IIR, satellites to augment and upgrade the constellation.

Block IIR satellites were built by Lockheed Martin, using the AS-4000 satellite bus, and were designed to provide a minimum of ten years’ service. Thirteen were launched between 1997 and 2004, with a further eight spacecraft being upgraded to the Block IIRM configuration and launched over the following five years.

The first Block IIR satellite, GPS IIR-1, launched atop a Delta II on 16 January 1997 but was lost seconds later when the structural failure of one of the rocket’s solid motors triggered the vehicle’s self-destruct. This was the only Block II spacecraft to be lost at launch.

Launched between 2005 and 2009, the eight Block IIRM satellites broadcast an additional military signal intended to be more resistant to jamming. 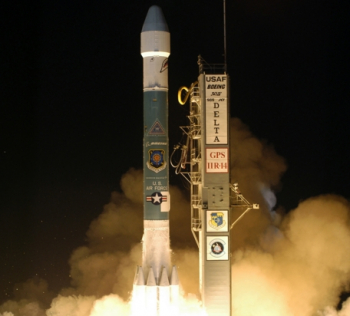 The penultimate IIRM spacecraft, USA-203, was equipped to broadcast an additional navigation signal, L5, as a demonstration ahead of the signal’s introduction with the Block IIF spacecraft.

In orbit, it was discovered that modifications made to the satellite to facilitate this test degraded its ability to broadcast regular navigation signals and as a result it never entered operational service.

Blocks IIR and IIRM were followed by the Boeing-developed Block IIF satellites. At the time of its inception in the mid-late 1990s, Block IIF was expected to consist of up to 33 satellites. This was scaled back to twelve, ten and then finally extended to twelve again, with the series serving as an interim between the end of Block IIR and the introduction of the next-generation Block III spacecraft. 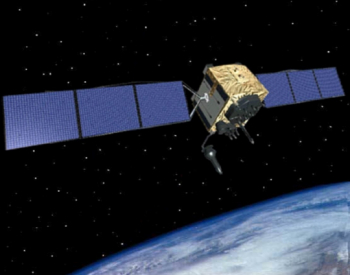 Block IIF spacecraft are the lightest Block II satellites – at 1,630 kilograms (3,590 lb) – which is achieved because of the more powerful rockets used to launch them; the Atlas V and Delta IV Evolved Expendable Launch Vehicles (EELVs) are both capable of placing the satellites directly into their operational Medium Earth Orbits, whereas earlier spacecraft launched by the Delta II incorporated solid-fuelled apogee motors to inject themselves after initial deployment into a transfer orbit. Block IIF satellites have a design life of twelve years.

The first Block IIF, GPS IIF-1 or USA-213, was launched atop a Delta IV Medium+(4,2) rocket in May 2010. Launches have been split evenly between the Delta and the Atlas V, with Delta deploying the first, second, third, fifth, sixth and ninth satellites and Atlas carrying the fourth, seventh, eighth, tenth, eleventh and twelfth. 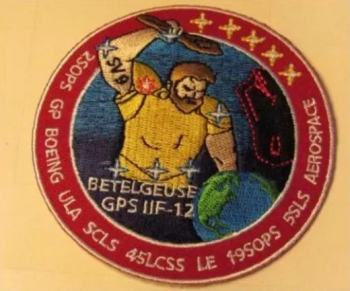 Each mission is named after a star – typically a bright or recognisable one which would be important to navigation. GPS IIF-1 was given the name Polaris, IIF-2 was named Sirius, with the subsequent names being Arcturus, Vega, Canopus, Rigel, Capella, Spica, Deneb, Antares and Altair. GPS IIF-12 is named after Betelgeuse, a red supergiant which is the second brightest star in the constellation Orion.

Each GPS satellite broadcasts a pseudo-random noise (PRN) signal encoded with a navigational message that contains the time, orbital properties of the satellite and information on the status of the constellation. Each satellite is assigned a different PRN signal, with GPS IIF-12 expected to take on PRN-04 when it begins broadcasting. PRN-04 was last used by USA-96, a Block IIA satellite which was launched in October 1993 and decommissioned last October, after 22 years in orbit, to make way for the launch of the previous Block IIF spacecraft.

Once it reaches orbit, GPS IIF-12 will be given a designation under the USA series, used to give a uniform designation to American military satellites. Recent designations have been assigned sequentially, so GPS IIF-12 will likely become USA-266. The satellite is also known by its Space Vehicle Number (SVN) – its serial number within the GPS series, which is SVN-70. 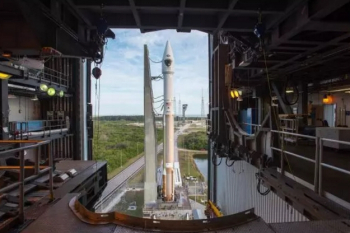 The Atlas V that launched GPS IIF-12 had the tail number AV-057 and flew in the 401 configuration.

Equipped with a four-meter payload fairing, no solid rocket motors and a single-engine Centaur (SEC) upper stage, the Atlas is flying a mission involving two upper stage burns to deploy its payload into a circular Medium Earth orbit. 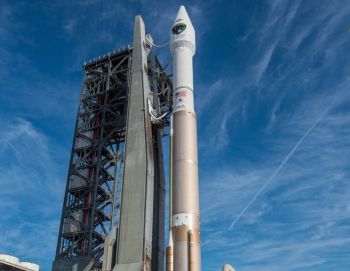 Rockets were assembled in a common Vertical Integration Building (VIB) and transported to the pad vertically atop a mobile launch platform on rails. Payload installation took place at the launch pad, using large mobile service towers.

In addition to the Titan IIIC, the Titan IIIE and Titan IV rockets used SLC-41 with the final Titan launch from the pad – a failed attempt to place a Defense Support Program missile detection satellite into geostationary orbit – lifting off in April 1999. Subsequently the pad’s towers were demolished to make way for a clean-pad facility that would be used by the Atlas V.

A new Vertical Integration Facility (VIF) was erected closer to the launch pad than the old VIB to cater to final assembly of the Atlas, with payload integration also taking place in the VIF. The Atlas V made its maiden flight from the pad in 2002. 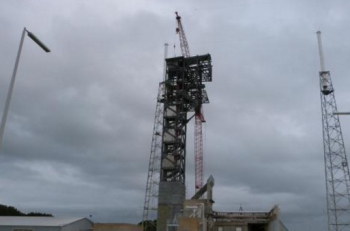 A new tower is currently under construction at Complex 41 which will be used when Boeing’s CST-100 Starliner spacecraft begins using the facility for manned missions no earlier than 2017.

Departing from SLC-41, AV-057 ignited its first stage engine 2.7 seconds before its countdown reached zero. The first stage, or Common Core Booster (CCB), is powered by a single RD-180 engine – a two-chamber derivative of the RD-170 engine which was developed for the Soviet Union’s Zenit rocket.

Russian manufacturer NPO Energomash developed the engine, which burns RP-1 propellant oxidised by liquid oxygen. The CCB can be augmented by up to five solid rocket motors, however none are required for Friday’s mission. 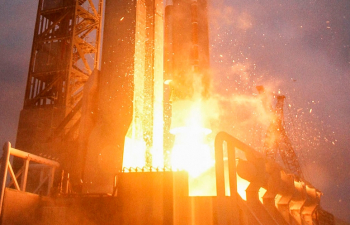 Once the thrust generated by the RD-180 exceeded the weight of the Atlas vehicle and her payload – at 1.1 seconds after the zero mark in the countdown – the rocket lifted off and began its ascent towards orbit.

A series of pitch and yaw manoeuvres began 17.3 seconds after liftoff to establish the rocket on an azimuth of 45.8 degrees, taking it northwest over the Atlantic Ocean as it leaves Cape Canaveral.

The vehicle passed through Mach 1, the speed of sound, at 78.5 seconds elapsed time. About 11.8 seconds later it encountered the area of maximum dynamic pressure, or Max-Q, when the vehicle was under its greatest aerodynamic load. 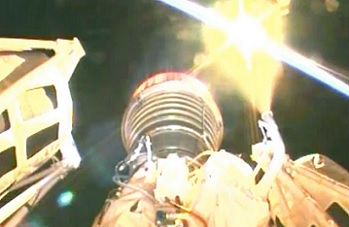 Powered by liquid hydrogen and liquid oxygen, the Centaur’s first burn lasted for 12 minutes and 44.1 seconds.

This burn was followed by a coast phase lasting a few tenths of a second short of three hours. Restarting at the end of the coast for an 86.8-second burn, the Centaur circularized its orbit ahead of spacecraft separation four minutes and forty-six seconds after the conclusion of the burn, at three hours, 23 minutes and 16.1 seconds mission elapsed time. 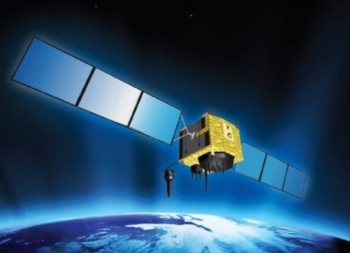 Following spacecraft separation, the Centaur will likely restart again for a disposal burn to remove itself from the operational GPS orbit.

Friday’s launch was the first of 2016 for United Launch Alliance and its Atlas V rocket – and the second of the year for the United States following January’s Falcon 9 launch which successfully deployed the Jason-3 satellite into low Earth orbit.

ULA will be in action again next Wednesday with a Delta IV flying from Vandenberg with a classified payload – widely expected to be a radar imaging satellite – for the National Reconnaissance Office.

The next Atlas V launch is slated for around 10 March, when the rocket will orbit a Cygnus supply vehicle bound for the International Space Station.

The next launch of a GPS satellite is not expected to occur until May next year at the earliest. The first Block IIIA satellite will fly atop a Delta IV, with subsequent launches also using the Atlas V and Falcon 9 vehicles.