Japan launched the ASTRO-H x-ray astronomy satellite via its H-IIA rocket Wednesday, with a launch from the country’s Tanegashima launch site occurring at 17:45 local time (08:45 UTC). ASTRO-H, which was previously known as the New X-ray Telescope (NeXT), is a high-energy astronomy mission led by the Japan Aerospace Exploration Agency (JAXA).

JAXA’s mission is in partnership with the US Space Agency, NASA – along with the European Space Agency (ESA), Canadian Space Agency (CSA), Netherlands Institute for Space Research and universities in Japan, Europe and North America.

Carrying a suite of instruments dedicated to observing x-rays, ASTRO-H is expected to operate in low Earth orbit for three years. 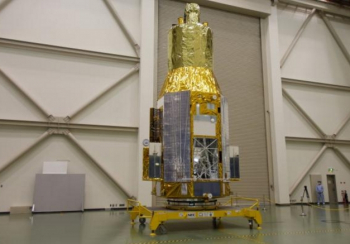 The 2,700-kilogram (6,000 lb) satellite is equipped with four telescopes and six detectors, allowing it to study both “hard” and “soft” x-rays and gamma rays. An x-ray is electromagnetic radiation with an energy of between 0.1 and 100 kiloelectronvolts (keV); between ultraviolet radiation and gamma rays in the electromagnetic spectrum.

Once in orbit, a pair of three-panel solar arrays will be deployed providing a minimum of 3.5 kilowatts of power for the satellite’s systems and instruments.

The apertures of ASTRO-H’s telescopes are located on the forward surface of the satellite, known as the Fixed Optical Bench (FOB), focussing incident x-rays onto the instruments. 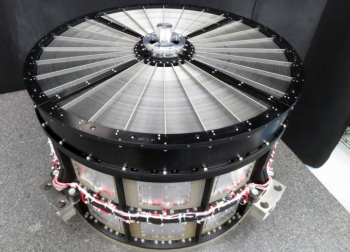 The remaining telescopes are a pair of Hard X-ray Telescopes (HXT), which focus hard x-rays onto imagers mounted to a six-metre (19-foot) boom at the rear of the spacecraft.

With its boom – the Extensible Optical Bench (EOB) – fully deployed, ASTRO-H will be 14 metres (46 feet) long. This enables a focal length of 12 metres (39 feet) for the hard x-ray imaging system.

The twin Hard X-ray Imagers (HXI) collect x-rays with cadmium telluride detectors to produce images of the distribution of incident photons at energies of between five and eighty kiloelectronvolts within a nine-by-nine arcminute field of view.

The soft x-ray detectors do not require such a long focal length and are located within the body of the satellite – attached to the rear panel, or aft bulkhead.

The Soft X-ray Imager, or SXI, pairs up with the SXT-I telescope to provide an imaging system that has a focal length of 5.6 metres and is capable of imaging incident rays with energies between 0.4 and 12 keV. It has a field of view of 38 by 38 arcminutes. 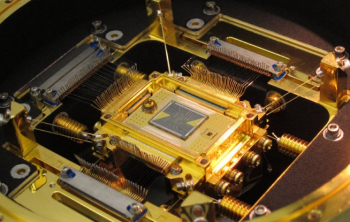 The Soft X-ray Spectrometer, or SXS, is a NASA instrument which consists of a high-resolution x-ray microcalorimeter which will measure the energies of incident photons and produce spectra showing the intensity of individual energies in the observed radiation. The spectrometer can observe photons with energies of between 0.3 and 12 keV, with a resolution of less than 7 electronvolts.

The instrument is equipped with filters which can be put into place to allow particularly intense x-ray sources to be observed, while the satellite also carries its own x-ray source to allow the spectrometer to be calibrated. To achieve accurate results, the SXS will be cooled using a multi-stage liquid helium system to a temperature of 0.05 Kelvin (-273.10 degrees Celsius, -459.58 Fahrenheit). 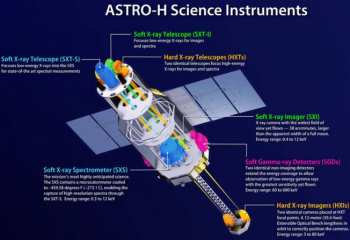 ASTRO-H also carries two Soft Gamma-ray Detectors (SGD), which use Compton telescopes to observe gamma rays through Compton scattering caused when the photons interact with semiconductor plates in the detector.

Mounted on either side of the spacecraft, these sensors will be able to detect gamma ray sources emitting radiation with energies of between 60 and 600 keV. 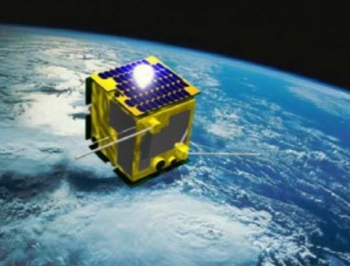 The ChubuSat spacecraft are 50-kilogram (110 lb) microsatellites operated by Japan’s Nagoya University and constructed by Nagoya in partnership with Mitsubishi Heavy Industries (MHI). ChubuSat-2, which is a collaboration between Nagoya and Daido University, carries a radiation detector to study solar and terrestrial radiation and an infrared camera.

Radiation research conducted by ChubuSat-2 will aid in calibrating data that ASTRO-H collects, as it will provide information on background radiation at the time observations are made. ChubuSat-3 carries a high-resolution imaging system to be used primarily for environmental research and to observe orbital debris. Both satellites also carry amateur radio payloads. 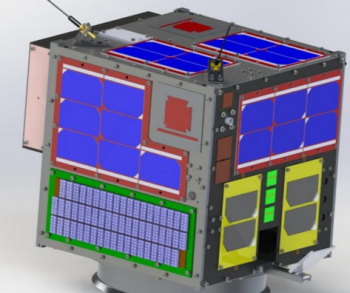 The spacecraft was built and will be operated by the Kyushu Institute of Technology. 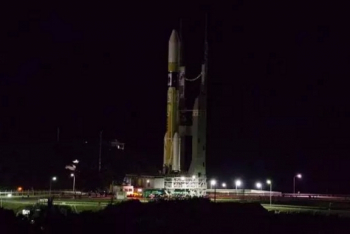 Flying in its lightest configuration, the H-IIA 202, the rocket consists of two stages with a pair of SRB-A3 solid rocket motors augmenting the first stage at liftoff. Both the first and seconds stages are cryogenically-fuelled, burning liquid hydrogen oxidised by liquid oxygen.

The H-IIA first flew in August 2002; a replacement for the earlier H-II vehicle which had proven more expensive to operate and less reliable than had been hoped. The H-IIA was derived from the H-II, with both stages upgraded, improved engines and the smaller SRB-A motors in place of the longer and more expensive SRB which had previously been used.

The H-IIA introduced four different configurations; the 202, 2022, 2024 and 204, with different arrangements of boosters to suit payload requirements. The 202 configuration uses two SRB-A motors, the 204 uses four, while the 2022 and 2024 configurations used two SRB-A and two or four Castor-4AXL motors.

Both configurations that included the Castor motors have since been withdrawn after continuous upgrades to the vehicle – including improved SRB-A3 motors replacing the original SRB-As – made them redundant.

In twenty-nine previous flights, the H-IIA has achieved twenty-eight successes.

Its only failure came during the sixth launch; an H-IIA 2024 carrying two IGS reconnaissance satellites for the Japanese government. One of the SRB-A motors burned through insulation around the nozzle, damaging the pyrotechnics used to effect separation. As a result, the booster failed to separate after burnout, and the vehicle was destroyed by range safety. 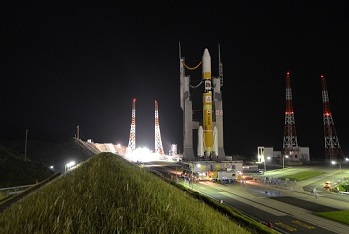 All of the H-IIA’s launches have been made from pad 1 of the Yoshinobu Launch Complex at Japan’s Tanegashima Space Centre. Yoshinobu consists of two pads – pad 1 was constructed in the early 1990s for the H-II, while pad 2 was built in the 2000s as a backup pad for the H-IIA.

Although the H-IIA has never flown from pad 2, it is the primary launch pad for the larger H-IIB rocket, used to deploy Kounotori spacecraft bound for the International Space Station.

The H-IIA and H-IIB share a vertical assembly building half a kilometre to the north-west of the pads. Ahead of Wednesday’s launch the rocket – H-IIA F-30 – departed the assembly building atop a mobile launch platform at around 05:10 local time (20:10 UTC) and arrived at the pad about 25 minutes later.

Ignition of the H-IIA’s first stage engine, an LE-7A, occurred at around the three-second mark in the countdown, followed by booster ignition and liftoff.

The two SRB-A3 motors fired for the first 99 seconds of the ascent, providing additional thrust as H-IIA F-30 climbed through the densest regions of the atmosphere.

Nine seconds after burnout, with the rocket at an altitude of 56 kilometres (35 miles, 30 nautical miles), the spent motors separated from the vehicle.

Four and a quarter minutes after liftoff H-IIA F-30 was at an altitude of 170 kilometres (106 miles, 92 nautical miles). Having protected the payload from the atmosphere during the climb into space, the payload fairing separated from the nose of the rocket. The H-IIA’s smallest payload fairing, the 4S, was used for the ASTRO-H mission. 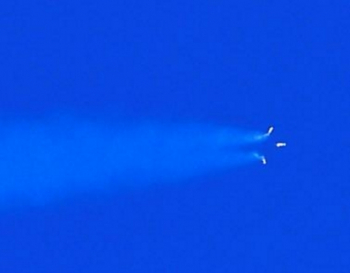 The first stage burned for six minutes and thirty-eight seconds, accelerating the second stage and payload to a velocity of 4.8 kilometres per second (10,700 mph, 17,000 kph). Eight seconds after completing its burn, the first stage was jettisoned with second stage ignition taking place six seconds later.

For Wednesday’s mission the second stage performed a single burn of its LE-5B engine. Lasting six minutes and 32 seconds, this engine firing established a circular orbit at an altitude of 575 kilometres (357 miles, 310 nautical miles), inclined at 31.0 degrees.

Fifty seconds after the end of the second stage burn, at fourteen minutes and fourteen seconds mission elapsed time, ASTRO-H separated from the carrier rocket to begin three months of on orbit activation and testing.

Once this is complete the satellite will perform six weeks of calibration before science operations begin. Once in orbit, Japanese tradition dictates that the spacecraft will be renamed to celebrate its successful launch. 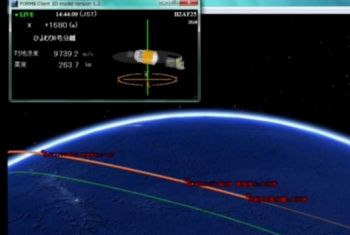 Wednesday’s launch was the twelfth of 2016 worldwide, and the first of the year for Japan. It was the first of three H-IIA missions expected this year, however no launch dates have been announced for the other missions, which will carry the Himawari-9 weather satellite and the IGS Radar 5 reconnaissance spacecraft.

The larger H-IIB is scheduled to make a launch in early November, which will carry the sixth Kounotori resupply mission to the International Space Station. The year may also see the second flight of Japan’s smaller Epsilon rocket.