While Orbital ATK’s first Enhanced Cygnus spacecraft performs well at the International Space Station, the company is looking ahead to its next mission, the OA-6 resupply flight that, while delayed until at least 22 March due to a mold contamination issue, is set to debut new science initiatives for Orbital ATK and Cygnus.

At the Cape Canaveral Air Force Station, United Launch Alliance is in the process of preparing the Atlas V core stage and Centaur second stage of the Atlas V 401 rocket for launch of the Orbital ATK OA-6 mission to the International Space Station (ISS). 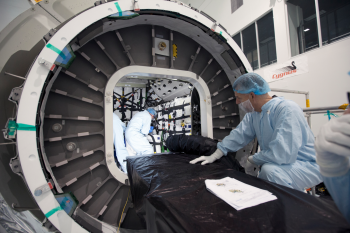 That mission, originally scheduled to launch in early March, has been delayed until at least 22 March because of black mold spore contamination found inside cargo bags that were to be loaded onto the Enhanced Cygnus spacecraft.

Following the discovery of the mold spores, NASA decided to disinfect all of the cargo bags for OA-6.

The decision ended up having a direct impact on the targeted early-March launch date for OA-6 because the now-required decontamination involved more time to complete then the remaining ground processing timeline had to support the original launch date.

Presently, 22 March is considered the earliest possible launch date – a No Earlier Than (NET) date – for the OA-6 mission, with disinfection of all cargo bags a top priority and the main driver for the launch date at this time. 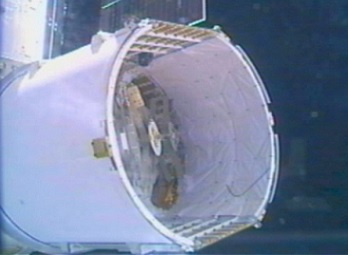 While the long-term effects of black mold on the human body are still being studied and are still “inconclusive” according to the U.S. Centers for Disease Control and Prevention, the short-term and immediate effects are well known and something NASA prides itself on preventing in terms of exposure for the crew aboard the ISS.

Notably, this is not the first time a contamination issue on a commercially contracted resupply mission to the ISS has caused the delay of a resupply flight.

In March 2014, the SpaceX CRS-3 resupply mission was delayed due to potential oil contamination from a sewing machine used to stitch cloth shields employed to protect the payload in the aft cargo trunk of the Dragon module.

For OA-6, however, this launch delay might provide NASA time to add more cargo to Cygnus for the fifth Orbital ATK resupply mission to Station. 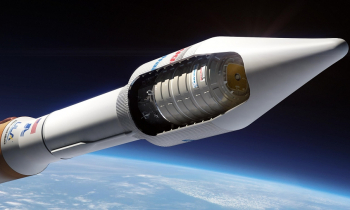 According to Frank DeMauro, Vice President of Human Space Systems and Space Logistics & CRS Program Director for Orbital ATK, “We design the system and the processes for the packing of the module to give NASA as much flexibility as we can – regardless of whether that’s on an Atlas or Antares.

“If there’s room in the cargo module and there’s lift capability on the rocket – which there is in this case – and NASA wants to add more cargo than we currently have planned, then we will do that.”

As always, the driving factor for loading more cargo will be whether that cargo is ready by the date needed to meet the eventual launch date for the OA-6 mission.

Presently, the OA-6 Cygnus has a target launch weight of roughly 16,300 lbs and carries the capability to remain on orbit and docked to the ISS for the contractually required 60 days.

However, as is currently seen with the OA-4 mission, Cygnus has the capability to remain on ISS for greater than 60 days, with the current Cygnus now enjoying its 74th day of docked operations.

Nonetheless, the OA-6 mission will not simply be another resupply run to the International Space Station for Orbital ATK or NASA. 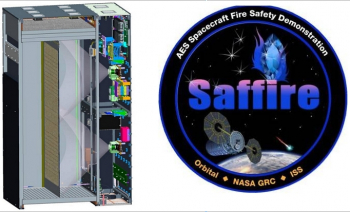 Excitingly for Orbital ATK and the Cygnus teams will be two new science payloads that will launch on board and outside of the OA-6 Cygnus next month.

Inside Cygnus will be the Saffire scientific payload, while a CubeSat deployer Nanoracks will be mounted to the outside of the Cygnus

Saffire will be packed within the enhanced cargo module and remain inactive inside Cygnus’ pressurized compartment during docked operations with the orbiting laboratory.

Likewise, the CubeSat deployer Nanoracks will remain inactive during docked operations with ISS.

It will only be after the OA-6 mission is complete and Cygnus is unberthed from the Station that Cygnus will get a moment to shine in the scientific environment. 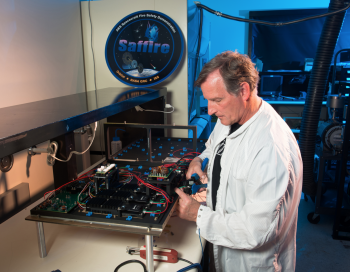 Typically, while Orbital ATK uses the post-unberth and pre-reentry time to test certain Cygnus flight systems for enhancement on later missions, the company will get the opportunity on OA-6 to perform an unprecedented week-long series of scientific experiments using Saffire and Nanoracks.

In regard to Saffire , Mr. DeMauro stated that “Saffire is a scientific experiment that was designed and built by NASA Glenn Research Center to study combustion in microgravity.”

For this reason, the experiment will only be activated when Cygnus is safely detached from the orbital laboratory.

According to Mr. DeMauro, “Once we fly away from the Station, we will turn on the experiment. It will burn something. We will take all sorts of measurements of the combustion, and then we’ll fly around for a little bit and downlink the data.”

Importantly, Saffire will not be a one-and-done payload for Orbital ATK and Cygnus. 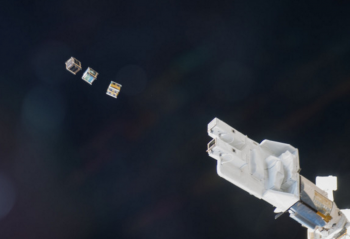 While the Saffire experiment on OA-6 will be destroyed during atmospheric entry, Orbital ATK plans to fly the experiment again on this summer’s OA-5 mission and on the later-in-2016 OA-7 flight.

As Mr. DeMauro stated, Orbital ATK is “really pleased to be part of using Cygnus as a testbed for NASA experiments. That’s a pretty exciting place to be.”

Likewise, in the week between OA-6’s unberth from ISS and reentry, the exterior Nanorack payload will also be activated.

Once the external deployer is active, Orbital ATK will be able to deploy numerous Cubesats into orbit.

“This is another way that Cygnus can accommodate the small commercial entities that built and operate these Cubesats,” stated Mr. DeMauro.