Expedition 46 duo Yuri Malenchenko and Sergey Volkov have completed a highly successful Russian EVA-42 on Wednesday, involving the deployment and retrieval of several experiment packages on the Zvezda and Poisk modules. Meanwhile, officials continue to investigate last month’s EVA, which was terminated early after water entered the helmet of Tim Kopra.

This latest EVA began when the two Russians exited the Pirs airlock at 12:55 UTC.

The first task was to take samples from the window of the Pirs module, to check no thruster residue – caused by docking and departing vehicles – has built up on the surfaces. 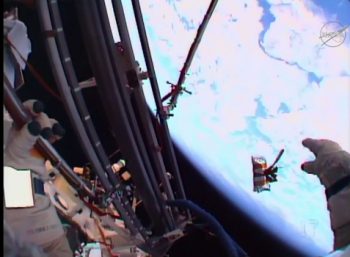 The next task was to jettison a flash drive containing messages to mark the 70th anniversary of Russia’s Victory Day.

The small canister, which also included scripts and videos, was thrown retrograde from Station and holds no threat of recontacting the Station.

While the main objectives of the veteran spacewalkers were to deploy and retrieve several experiment packages, they were also tasked with installing two gap spanners – placed on the hull of the station to facilitate the movement of crew members on future spacewalks. 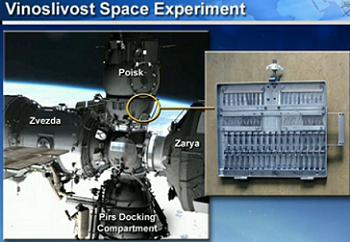 Per the primary EVA tasks, Malenchenko and Volkov also installed the Vinoslivost experiment, which will test the effects of the space environment on various structural material samples.

They also tested a device called the Restavratsiya experiment, which could be used to glue special coatings to external surfaces of the station’s Russian segment.

The pair also retrieved the EXPOSE-R Experiment, a collection of biological and biochemical samples placed in the harsh environment of space.

The EXPOSE program is part of ESA’s (European Space Agency) research into astrobiology, or the study of the origin, evolution and distribution of life in the universe.

The experiment has been a feature of many Russian EVAs and examines how microgravity and the conditions outside the ISS affect different biological samples on the science package.

Pictures are usually taken and sent back to Earth to reveal to investigators whether there has been any change to the materials involved with this experiment. However, this time, after seven years of exposure, the package – consisting of three trays – was brought back inside the Station.

The spacewalk was the 193rd in support of space station assembly and maintenance, the sixth spacewalk for Malenchenko and the fourth spacewalk for Volkov. It ended ahead of schedule due to the spacewalkers achieving all the tasks in good time.

Both are wearing Russian Orlan spacesuits bearing blue stripes, a different type of spacesuit to that used by US astronauts, which is currently under investigation after the water leak aborted the recent US EVA. 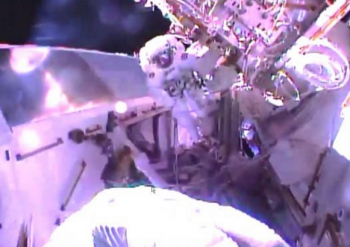 The spacewalk was the first ever to be conducted by a British astronaut, Tim Peake. However, due to water entering “EV1” Tim Kopra’s helmet – a potentially serious incident – the EVA was terminated early for safety reasons.

“At around the 2 hour mark, EV1’s CO2 began trending upward and then a ‘CO2 SENSOR BAD’ message was received. It was deemed the rise in CO2 was indicative of a sensor failure based on trending data,” noted a L2 ISS overview of the issue.

“Per flight rules the suit was go to continue using other CO2 monitoring methods. (However,) following the nominal NPV (Non-Propulsive Vent) installation, EV1 noted a small amount of water in his helmet, and the EVA was terminated early.  A nominal repress was performed with an expedited suit doffing for EV1. 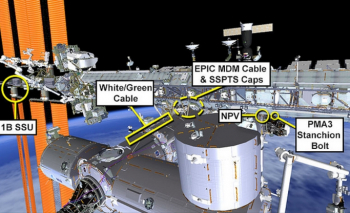 “All cables were left in a good long term configuration (properly tied down or left in thermal protection bags).  Total phase elapse time (PET) for EVA was 4 hours and 43 minutes.”

The termination of the EVA meant the spacewalk was unable to complete the routing and mating of the EPIC MDM Cable.

However, the Crew Debrief noted that the spacewalkers had managed to complete all tasks through to the securing of the W0087 P3/P4 connectors on Z1 HR 6012. The crew used a white wire tie to wrap up the bundles that had been undone.

“The hardware is considered structurally secured.  Passive thermal has no issues with this configuration since the connectors were confirmed to be capped and by design are wrapped in aluminum tape.  This is considered a good configuration.  No further investigation is required,” added L2 ISS Status.

The fault on Tim Kopra’s suit (EMU 3011) was immediately investigated via the collection of suit samples. Some of these samples will be returned for analysis on the ground, either via the return of the next SpaceX Dragon spacecraft (CRS-8) or potentially on a returning Soyuz. 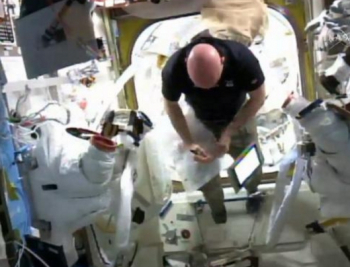 The crew also pressurized the EMU during testing and an unmanned leak screening was performed for a duration of 6 hours.  The screening was successfully completed with no leaks detected.

However, a week after the EVA, as the crew configured EMU suits 3008 and 3011 for the regular task of loop scrubbing. A leak was observed at the Liquid Cooling and Ventilation Garment (LCVG) to water processing jumper connector, potentially pointing to a root cause.

“Photographs of the leak were taken and the area dried. (However,) an attempt to recreate the leak during iodination was unsuccessful,” added the L2 ISS information.

The teams are continuing to investigate the suit via regular Anomaly Resolution Team (ART) meetings at the Johnson Space Center.