IRNSS is designed to use seven satellites in geosynchronous orbits, providing India with a satellite navigation system that is not reliant upon other countries’ space assets.

The constellation will achieve operational capacity following the next mission – with the IRNSS 1G satellite – although ISRO announced plans for four additional reserve spacecraft. 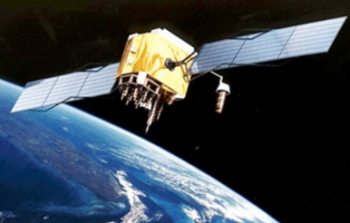 The first satellite, IRNSS-1A, was placed into orbit in July 2013. Further satellites were successfully launched in April 2014, October 2014, March 2015 and most recently the January launch of IRNSS-1E.

IRNSS-1C is located in geostationary orbit at 83 degrees East. The remaining positions, 34 and 132 degrees East, are currently vacant awaiting IRNSS-1F and 1G later in the year. Overall, this was the sixth satellite launch for IRNSS. 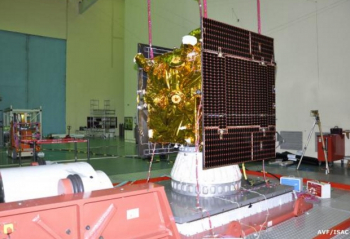 Each satellite is capable of generating 1,600 watts of power through its twin solar arrays. The spacecraft broadcast S-band and L5 navigation signals and are also equipped with C-band transponders and retroreflectors to aid in position and range determination. 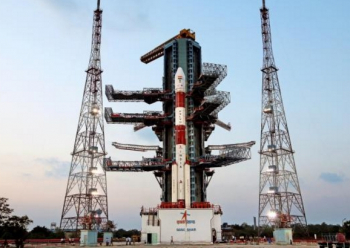 IRNSS-1F was launched by PSLV-C32; the thirty-fourth flight of India’s Polar Satellite Launch Vehicle and overall India’s 51st orbital launch. For Thursday’s launch, the PSLV flew in its most powerful configuration, the PSLV-XL.

The PSLV and GSLV comprise India’s second generation of carrier rockets. The next-generation Geosynchronous Satellite Launch Vehicle Mk.III, or LVM-3, remains under development having made a successful suborbital test flight in December 2014. 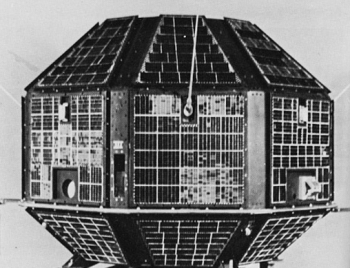 India made its first satellite launch attempt in August 1978 using a Satellite Launch Vehicle carrying the Rohini Technology Payload (RTP), however the rocket malfunctioned and came down in the Bay of Bengal. A successful launch was achieved at the second attempt, on 18 July 1980, with the RS-1 – or Rohini – satellite.

Two further SLV launches occurred in 1981 and 1983; the latter a success but the former resulting in its payload being left in an unusably low orbit.

Like the SLV, the Augmented Satellite Launch Vehicle also made only four flights. The first two of these, in March 1987 and July 1988, both failed to achieve orbit. The third launch – in May 1981 – achieved an unplanned, but partially usable orbit, while only the fourth was successful in May 1994.

The ASLV was a stretched version of the earlier SLV, with two additional S-9 motors attached to the sides of the vehicle serving as its first stage. The third S-9 motor, that would have been the first stage of the SLV, served as the ASLV’s second stage. All of the ASLV launches carried Stretched Rohini (SROSS) satellites.

The much larger Polar Satellite Launch Vehicle first flew in September 1993, carrying the IRS-1E remote sensing satellite towards orbit. A failure of the rocket’s attitude control system resulted in the vehicle having to be destroyed by range safety; the only outright failure that the PSLV has suffered to date. 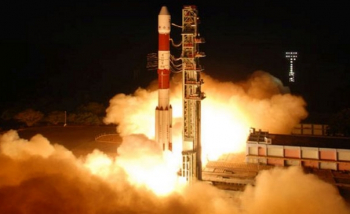 Following two further demonstration flights, successfully carrying the IRS-P2 and P3 satellites in 1994 and 1996 respectively, the vehicle was declared operational. The next launch, PSLV-C1, was a partial failure and placed IRS-1D into a lower-than-planned – although still usable – orbit in 1997.

Since the IRS-1D launch, the PSLV has made twenty-eight successful launches, including the deployments of the Kalpana-1 and GSAT-12 geosynchronous weather and communications satellites, SRE-1 – the first Indian satellite to be recovered from orbit, the Franco-Indian Megha-Tropiques climate research satellite, France’s SPOT-6 and SPOT-7 remote sensing spacecraft and India’s AstroSat astronomy mission. The PSLV also deployed two planetary missions: Chandrayaan-1 to the Moon and the Mars Orbiter Mission, in 2008 and 2013 respectively. 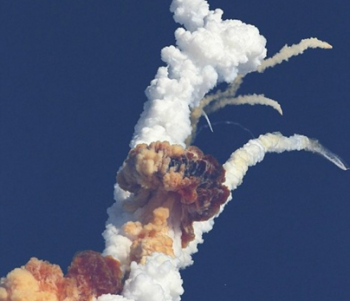 The GSLV has a more chequered record, having four successes from nine attempts since its unsuccessful debut in April 2001. During the maiden flight the GSLV delivered GSAT-1 into a lower than planned orbit from which the satellite could not recover – however these recovery efforts were complicated by unrelated problems with the satellite’s own propulsion system and had these problems not occurred the spacecraft may have been able to correct its own orbit.

The next two launches were successful, placing GSAT-2 and GSAT-3 into orbit in 2003 and 2004. Then, in July 2006, the rocket began a string of four consecutive failures with the launch of INSAT-4C. The rocket was destroyed by range safety after a booster failure sent it out of control. The next launch in September 2007 carried a replacement, INSAT-4CR. The rocket underperformed, delivering the spacecraft into a lower than planned orbit, however INSAT-4CR was able to reach its planned final location under its own power. 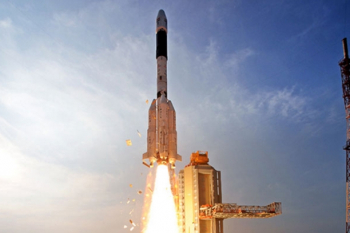 April 2010 saw the GSLV fly in its Mk.II configuration, with a new cryogenic upper stage powered by an Indian-built engine in place of the Russian propulsion system used on earlier launches. This failed to ignite, resulting in the loss of the GSAT-4 satellite. In December of the same year, the final Mk.I GSLV was destroyed by range safety on a Christmas Day launch that carried the GSAT-5P spacecraft.

Returning to flight in January 2014, the GSLV Mk.II achieved its first success with the launch of GSAT-14, which was followed by the launch of GSAT-6 last August. The next launch is expected towards the middle of 2016, carrying INSAT-3DR.

While the GSLV was designed to deploy geosynchronous satellites, the PSLV is capable of doing so as it will during Wednesday’s mission, although it necessitates targeting a lower transfer orbit than is typically used on geosynchronous missions by rockets designed for the task. The PSLV-XL configuration provides the highest performance, however a standard PSLV has also been used for such missions. 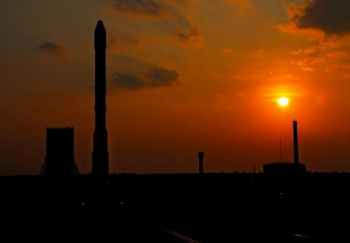 The PSLV-XL, which was used for Thursday’s flight, is the largest of the three PSLV configurations and replaces the six PS0M, or S-9, strap on solid motors used by the standard vehicle with six PS0M-XL or S-12 motors. The smaller Core Alone, or PSLV-CA, configuration omits these boosters altogether.

The first pair of ground-lit solids burned for about a minute and nine seconds, separating 68.9 seconds after liftoff. The second pair followed after two tenths of a second. A minute and thirty-two seconds into the flight the air-lit motors were jettisoned. 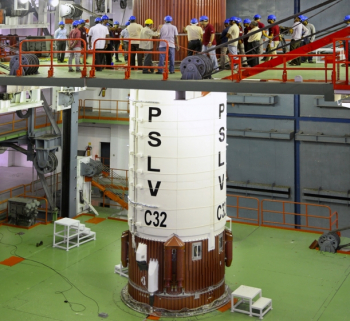 A minute and 50.9 seconds after liftoff, with the PSLV flying at an altitude of 56 kilometres (35 miles, 30 nautical miles), the first stage burned out, having exhausted its solid propellant. Two tenths of a second later the Vikas engine of the second stage ignited to continue the rocket’s ascent.

Derived from the French-developed Viking engines used by Europe’s Ariane series of rockets until 2004, the Vikas is a liquid-fuelled engine which burns UH25 propellant – a mixture of three parts unsymmetrical dimethylhydrazine with one part hydrazine hydrate – which is oxidised by dinitrogen tetroxide.

Separation of the payload fairing from around IRNSS-1F occurred a minute and twenty-seven seconds into the approximately two minute and thirty-two second burn of the second stage. The spent stage separated four minutes and 23 seconds mission elapsed time, with third stage ignition about 1.2 seconds after staging. The solid-fuelled PS3, or S-7, third stage burned for about 70 seconds.

Fuelled by liquid propellant – monomethylhydrazine and mixed oxides of nitrogen – the fourth stage burned for eight minutes and 27.1 seconds to attain IRNSS-1F’s planned initial transfer orbit of 284 by 20,657 kilometres (176 by 12,836 statute miles, 153 by 11,154 nautical miles) at an inclination of 19.2 degrees.

The orbital insertion is expected to have a margin of error of plus or minus 5 kilometres (3 miles) at perigee and 675 km (419 statute miles, 364 nautical miles) at apogee, with an allowable margin of 0.2 degrees in terms of inclination.

All of India’s orbital launches to date have been made from the Satish Dhawan Space Centre, which prior to 2002 was known as the Sriharikota High Altitude Range (SHAR). The facility has two active launch complexes used by PSLV and GSLV rockets, with earlier pads for the SLV and ASLV to the South no longer in use. 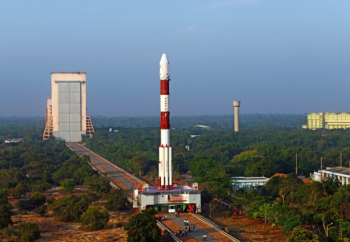 Thursday’s launch made use of the Second Launch Pad (SLP), which was built in the early 2000s and first used for the launch of CartoSat atop a PSLV in May 2005. All GSLV launches since that date have used the second pad, as well as the GSLV Mk.III test flight in 2014. The PSLV uses both the Second Launch Pad and the nearby First Launch Pad (FLP).

Mars set to receive NASA InSight at the end of 2018