NASA’s Exploration Systems Development office has completed its review of progress to date as well as forward path activity on the development of the Space Launch System (SLS) rocket to the NASA Advisory Council.  While several tasks and issues remain open, SLS continues a steady march toward its planned debut in late 2018 during the EM-1 mission as NASA continues to refine the rocket’s overall configuration thrust profiles.

Overall, the first seven months of 2016 have seen significant progress in the development of various structural test articles and the overall elements of the SLS vehicle that need to be tested prior to the EM-1 flight. Critically, most of the elements for the inaugural flight of SLS are no longer considered to be on the critical path toward making the “Not Later Than December 2018” launch window, according to the latest integrated milestone summary.

As reinforced by Bill Hill, Deputy Associate Administrator of the Exploration Systems Directorate (ESD) in his presentation to the NASA Advisory Council (NAC) last month, only three elements of SLS are now on a critical path for the EM-1 flight.

Those three elements are the Crew Module Adapter (CMA) and European Service Module (ESM) duo, the Orion crew module, and the Core Stage (CS) itself.

“About a month and a half ago, during the CDR (Critical Design Review) for the ESM, we were informed that they were going to deliver as much as 10 months late.  We worked with them to get it back to three [months late].  We believe that’s a viable schedule, and we’re looking to integrate that.”

As for Orion, Mr. Hill stated that it is the “secondary critical path only because once we join it up with the ESM/CMA, that integrated stack’s delivery to the Ground Systems folks was anticipated in January of ‘18.  And now it’ll probably be in April of ‘18 based on the late delivery of the ESM.”

Finally, the CS is the third and – right now – last critical path item for SLS and EM-1. “The Core Stage rebaselining pushes delivery of that one out to March of ‘18, when it was anticipated to be delivered in January of ‘18,” related Mr. Hill.  “So we’re working those issues.  We’re staying ahead of it.  We’re looking at thoughtful but innovative ways to redo our schedule.”

One of those innovative fixes described by Mr. Hill came in regards to the Orion crew module and the flight software development program.

However, while those are the three major flight hardware elements on the critical path toward SLS’s EM-1 flight, other technical issues are being identified, tracked, and worked by teams around the country.

As stated in the ESD presentation to NAC, “The [Cross Program Integration Team – CPIT] is watching several items discussed as ‘Top’ or ‘Emerging’ issues [that] will have interdependency impacts or be negotiated through the interdependency process.” One issue, that had been closed but is now reopened, pertains to the Orion Service Module Umbilical (OSMU) which releases at T0.

The OSMU was redesigned in mid-2015 to “minimize the amount of movement of the plungers and prevent premature release of the mechanism,” notes the ESD presentation to NAC.

To prevent the premature release, a collet – a segmented band or sleeve put around a shaft or spindle and tightened so as to grip it – was added.  However, subsequent testing then showed that the collet would not release. As related by Marshall Smith from the Integration Team, “Initially, for the Orion Service Module Umbilical, we were doing some testing at the LETF and we had some issues initially about a year ago where it was failing to release like we needed to.

“So we got into the redesign and got that knocked out.  The problem we’re having now is the possibility of a piece of FOD (Foreign Object Debris) or hardware being released when we undo a secondary release.

“In other words, what happens is if the umbilical doesn’t come out for some reason, a secondary release would be a 10,000 pound shear pin that would pop [the umbilical] off.

“And there’s a cup that holds that pin, and it should come back with the umbilical.  What happened a couple times in the testing is that the cup released [from the umbilical arm] after it pulled away from the surface structure. “So we reopened this issue.  We’re actually not even sure this is a credible failure because of the way the test was set up.  But we’ve got a tiger team, so we’ll have more information on this as we move forward.”

A second issue related to the OSMU was also presented by Mr. Smith.

This OSMU relates to an operation performed in the VAB prior to rollout.

According to the ESD presentation, “Performing the mechanical release and retract with the OSMU could damage the ground and/or flight plate and cause a significant risk to continued processing and launch.”

Mr. Smith noted that this is the Umbilical Release Retract Test (URRT), and has actually been resolved. 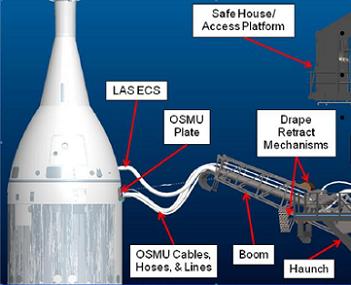 “We initially were worried that doing the [URRT] test in the VAB might damage the actual flight plate and introduce a possible contamination risk to the system that we have in the VAB when we were ready to roll out.

“We pulled together a team to look at that and came up with an alternative plan that will accomplish the objectives of the test without putting any of the hardware or our systems at risk.”

Moreover, a third issue discussed related to the ICPS umbilical loads, which are currently more than 200% over the design loads of the umbilicals.

“We were originally going to use the flight plates they have for ICPS on Delta.  But we’re obviously doing things a little differently than they do in the Delta system.

“So we found that the plates were about 200% over the hardware design limits on Delta system.  So we’re working at that, and we think we’ve got a solution.  We’re looking at the way the hose cradle with the bungee cords are situated that will reduce our moment loads.  And we think we can get that in the box.” A final issue noted by the ESD is with the new Vehicle Stabilization System (VSS) arm that will clamp onto SLS’s intertank section.

“Currently, VSS clearance is showing positive; however, the interface does not actually separate until around a max of T+ 220 Msec.  This could have an impact on liftoff loads,” notes the ESD presentation.

A JICB (Joint Investigation Control Board) action was subsequently opened to investigate the possible of separating the VSS at T-0.25 to ensure a clean separation by T0.

As stated by Mr. Hill, “The challenge that I see is that if we fire the [VSS] pyros at T0, will it get away and out of the way before the vehicle progresses up under all the distributed wind conditions and so forth. “So we’re looking at when the latest we can actually do that before firing the SRBs is and seeing if we can drop it away and then fire the SRB shortly after that.  So we’re encouraging the folks to have that separate before T0.  Right now it’s a T0 separation.  But we’re looking at … dropping that a quarter second or so ahead of T0.

“One downside of that is that we can’t access it if we drop it off and have to reapply it.  At the pad, we have no access.

Mr. Smith added later in the presentation that the issue of separating the VSS at T-0.25 seconds when weighed against the possibility of an on-pad abort sometime thereafter was not really an issue.

“We don’t believe this will cause us a problem because at that point we’re really, effectively at that point, going.  But we are doing some risk trades about what that would mean. “The engineering between SLS and KSC are working some actions right now to make sure we’re bringing this forward for a decision in the fall for how we think we’ll move forward on this.”

The only other item that received significant discussion from the NAC, and one that is not an issue, regarded the fact that SLS will not use hold down bolts to clamp it to the pad.

Hold down bolts during the Shuttle era were crucial to maintaining the vehicle’s alignment on the pad as the main engines fired up and the vehicle twang back under the force generated by its three SSMEs – which fired through the vehicle’s center of gravity.

However, SLS will not have this twang effect as its four RS-25 engines will fire directly up the vehicle. Mr. Hill noted that the immense weight of the SLS rocket (between 5.75 and 6 million pounds) is more than enough to keep it grounded firmly to the launch pad during the fire up sequence of the four RS-25 engines (which – at liftoff – will only be producing about 2 million pounds of thrust).

Additionally, the SRBs will be stacked on top of mounting pins that will ensure proper alignment of the vehicle is held through engine start and through an on-pad shutdown sequence, should that happen.

On the technical and engineering specifications side, NASA has updated the designs and propulsion profiles for the Block 1 and Block 1B configurations of SLS for the EM-1 and EM-2 flights, respectively. EM-1’s primary payload will be the Orion and its Launch Abort System, as well as 13 secondary payload CubeSats. Combined with the Interim Cryogenic Propulsion Stage (ICPS), the SLS Block 1 will be able to accelerate the Orion capsule to 36,371 kph (22,600 mph) for Trans Lunar Injection (TLI).

The two SRBs will burn for the same amount of time as they did during Shuttle launches, just over two minutes – as burn time for solid boosters is not dependent on the number of segments but rather the segment diameters, which are unchanged from Shuttle. The SRBs will be aided during first stage flight by the Core Stage, with its four RS-25 engines each producing a maximum thrust of 512,000 pounds (in a vacuum) while operating at 109% of rated performance.

Total burn time for the Core Stage engines will be slightly less than the three liquid-fueled main engines burned for Shuttle launches, coming in at an approximate burn time of 500 seconds (8mins 20secs) for SLS.

Given a pre-launch start time of T-6.3 seconds for the engines, Core Stage engine cut-off will come approximately 8 minutes 13.7 seconds after liftoff — a full 9.7 seconds earlier than Shuttle.

Finally, the other main propulsive element for the Block 1 SLS, the ICPS, will utilize a single RL10B-2 engine capable of providing approximately 700 seconds of burn time and a maximum thrust of 24,750 pounds. For the Block 1B configuration, all thrust parameters for the Core Stage’s four RS-25 engines and twin SRBs – as well as the maximum and liftoff thrust profiles of the rocket – remain unchanged from the Block 1 configuration.

The primary difference between Block 1 and Block 1B comes with the upper stage, which will be replaced from the ICPS to the Exploration Upper Stage (EUS).

In the Block 1B configuration, the vehicle will weigh 6 million pounds at liftoff and will be capable of accelerating the Orion spacecraft and its associated hardware to 38,403 kph (23,863 mph) following the TLI burn.

The EUS will utilize four RL10C3-1 engines capable of delivering a combined maximum thrust of approximately 96,000 pounds for a total burn time of 350 seconds for LEO ascent and 925 seconds for the TLI burn.