India’s Geosynchronous Satellite Launch Vehicle (GSLV) has successfully deployed the INSAT 3DR satellite on Thursday morning. The Indian Space Research Organisation (ISRO) launch – the first for the GSLV in over a year – occurred 30 minutes later than scheduled, at 11:10 UTC, launching from the Satish Dhawan Space Centre on Sriharikota Island.

The tenth flight for the Geosynchronous Satellite Launch Vehicle (GSLV) across its Mark I and II variants, Thursday’s launch was conducted by the ISRO.

First flown in April 2001, the GSLV has had something of a troubled history; of its nine launches to date, four completed their missions successfully, one reached a lower-than-planned orbit which was corrected at the expense of several years’ operational life for its payload, one reached an unusable low orbit that could not be corrected and three failed to achieve orbit altogether.

However, recent launches have been successful, pointing to increased reliability.

The GSLV tasked with the INSAT 3DR launch was a Mark II vehicle, featuring India’s indigenous cryogenic upper stage (CUS) in place of the Russian-engined version used on the Mark I. This is the fourth flight involving the CUS.

This launch was also classed as the first launch where the CUS is flown in an uprated configuration. As such, thrust was increased from 73.55kn to 93.1kn and propellant loading increased from 12.8 tons to 15 tons.

The INSAT 3DR spacecraft is set to replace INSAT-3D, which was launched by an Ariane 5 in 2013. INSAT-3D was developed by ISRO and designed to provide meteorological observation and monitoring of land/ocean surfaces.

The satellite – adapted from India’s I-2K spacecraft bus – included a six-channel imager and 19-channel sounder, as well as a data relay transponder and a payload for satellite-aided search and rescue operations.

However, the spacecraft never fulfilled its potential after suffering technical issues shortly after launch leading to limited operation. Its primary payload includes an imager and a sounder that will provide the meteorological data that will be beamed down via the spacecraft’s Data Relay Transponder (DRT).

The propellant carried by INSAT-3DR is mainly required to raise the satellite from the Geosynchronous Transfer Orbit (GTO) to its final Geostationary Orbit and to maintain the satellite in its orbital slot during its life.

The first stage of the GSLV consists of four L40-H strap-on liquid rocket motors clustered around a solid-fuel core stage powered by an S139 motor.

Each powered by a Vikas liquid rocket motor burning 42.6 tonnes (41.9 Imperial tons, 47.0 US tons) of fuel, the strap-ons make use of a mixture of unsymmetrical dimethylhydrazine and hydrazine hydrate, in a ratio of three parts to one, oxidised by dinitrogen tetroxide.

The four strap-on motors ignited around 4.8 seconds in advance of liftoff, with the solid-fuelled core igniting once the countdown reached zero. 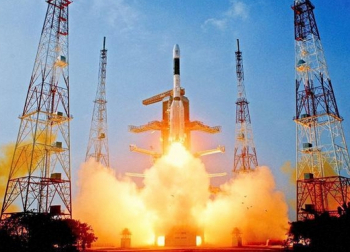 The first stage core burned for one minute and forty-six seconds before depleting its hydroxyl-terminated polybutadiene (HTPB) fuel. After this, thrust continued to be generated by the four strap-on motors until their shutdown two minutes and 29 seconds into the mission.

Separation of the payload fairing from the nose of the rocket occurred three minutes and fifty seconds after launch, with the rocket at an altitude of approximately 115.45 kilometres. The GSLV’s second stage completed its two-minute, 40-second burn at the four minute and forty-nine second mark in the mission.

Separating four seconds after cutoff, the spent stage then made way for the third stage to begin its burn.

Powered by a single cryogenic engine fuelled by liquid hydrogen and liquid oxygen, the third stage fired for two seconds short of twelve minutes to raise the spacecraft into its targeted deployment orbit.

Spacecraft separation occurred twelve seconds after the end of the GSLV’s powered flight, at 17 minutes and four seconds mission elapsed time, marking the successful conclusion to the mission.