The Laser Interferometer Space Antenna (LISA) pathfinder mission has come to an end via the final commanding of the spacecraft. The 16 month mission, has provided the tools for a future mission that may take place – probably not until the 2030s – having successfully demonstrated the technology required to operate a space observatory tasked with studying gravitational waves.

Conceived as a precursor mission to primary Laser Interferometer Space Antenna (LISA) – which was to be a joint mission between ESA and NASA, LISA Pathfinder was designed to prove a concept which scientists believed would allow gravitational waves – a phenomenon predicted by Albert Einstein’s theory of General Relativity but which had previously not been proven – to be observed by studying differences between perturbations in the orbit of a constellation of satellites.

NASA pulled out of the LISA mission due to funding challenges, placing the future mission in doubt. However, just last month, the primary mission received its clearance goal for the 2030s, and was approved as one of the main research missions of ESA. NASA continues to show some interest in being a minor partner. As the masses moved within the spacecraft, LTP used a laser interferometer to identify changes of position on the order of picometers.

Early in 2016, a brief test of drag-free conditions was achieved, applying no electrostatic potential along the cubes’ sensitive axes to control their position. The spacecraft was maneuvered around the cubes, keeping it centered around one.

NASA’s Disturbance Reduction System (DRS), a system of miniature thrusters – generating an impulse on the order of micronewtons – were used by the spacecraft to maintain its position relative to the free-floating masses.

These thrusters controlled the spacecraft’s position to the degree of nanometers.

DRS was originally developed by NASA as part of the New Millennium program, under the designation Space Technology 7 (ST-7). 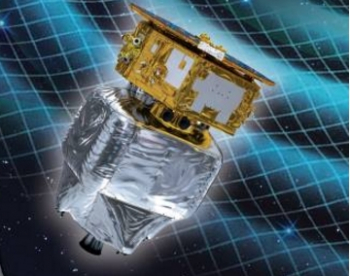 LISA Pathfinder’s experiment was designed to validate the spacecraft could accurately measure the movements of these test masses and maneuver accordingly. It was a scaled-down form of the experiment that would have been flown by LISA, using two masses within the same spacecraft instead of three masses in separate spacecraft orbiting at great distances.

LISA Pathfinder was originally to have been part of the Small Missions for Advanced Research in Technology (SMART) program, designated SMART-2. It would have been the second such mission, after the SMART-1 mission which orbited the Moon between 2004 and 2006.

The LISA Pathfinder spacecraft is a 1,906-kilogram (4,202 lb) vehicle consisting of separable propulsion and experiment modules. It was launched on Arianespace’s Vega rocket in December, 2015. 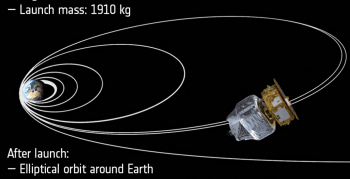 Upon the spacecraft reaching its operational halo orbit around the Earth-Sun L1 Lagrangian point, the propulsion module separated and maneuvered away from the experiment module.

In a 500,000 by 800,000 kilometer (300,000 by 500,000 mile) orbit around the Lagrangian Point, the spacecraft was set to operate for around half a year – spending three months testing the LISA Technology Package, two months testing the Disturbance Reduction System and then finally a month operating the two systems together.

However, with the mission proceeding without issue – and exceeding expectations – a further extension to the mission timeline was granted.

The final experiment pushed the precision limits of the test mass grabbing and releasing mechanisms. Then, after a series of final operational tests, the last commands were sent to shut down the spacecraft. While official operations ended on June 30, the spacecraft team uploaded commands to disable A Computer on Monday, with the final command to completely end the mission occurring on Tuesday.

“On 18 July, the LPF mission will conclude with the final commands sent to switch off the on-board transmitter. Since April, the mission operations team in Darmstadt have been working to ensure a safe and smooth end-of-life for this fantastic technology demonstration spacecraft,” noted ESA.

The final command was sent just prior to 6pm UTC.

For disposal, the spacecraft has already performed a de-orbit maneuver to leave its Lagrangian orbit and start to drift ahead of the Earth in a heliocentric orbit around the Sun.

“The spacecraft now has an orbital period a few days shorter than that of the Earth, keeping the spacecraft safely out of the way and drifting serenely around the Sun,” ESA added. 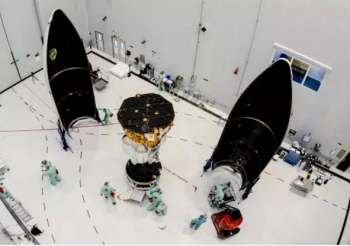 The follow on LISA mission will consist of three spacecraft in a triangular formation, each 2.5 million kilometers from the other two in an orbit around the sun trailing the Earth. The spacecraft would shine lasers at each other, with interferometers on each spacecraft detecting minute distance changes caused by passing gravitational waves.

The three spacecraft, with a combined mass of about 6,000 kilograms, including payload adapter, would launch on an Ariane 6 and drift to their planned orbit over the course of a year and a half.

LISA is to have a planned mission lifetime of four years, but with sufficient propellant on each spacecraft to operate for up to a decade.