Engineers have begun to install the new Flame Deflector into the Flame Trench of Pad 39B. Following the demolition of the legacy deflector that catered for the Space Shuttle, a large Ignition Over-Pressure/Sound Suppression (IOP/SS) manifold pipe has now been installed ahead of surrounding it with the new universal deflector for the Space Launch System (SLS).

While work continues on removing Shuttle legacy structures from Pad 39A – including the final elements of the Rotating Service Structure (RSS) as SpaceX modify the pad for their own rockets – 39B hasn’t looked like a former Shuttle pad for several years.

Controlled demolition of 39B’s Shuttle structures began in September, 2010 – with deconstruction work commencing on the RSS, a process that is currently being copied at 39A.

However, unlike the SpaceX pad, 39B also removed the Fixed Service Structure (FSS), which SpaceX will instead keep in place and modify ahead of crewed Falcon 9 launches with the Dragon 2 spacecraft.

Pad 39B’s future is to be a “clean pad”, which allows for multiple users to roll up to the pad on a Mobile Launcher (ML) and utilize its infrastructure by “plugging into” its utilities.

With the new structures now in place above the pad’s surface, work in the bowels of the pad has been conducted, starting with the refurbishment of the Flame Trench.

The Trench is 490 feet long, 58 feet wide and 42 feet deep and built with concrete and refractory brick bisected the pad at ground level. Following the transition from Shuttle to SLS, the trench has received 93,000 new bricks, with the last of the new additions being laid just this month. While this work was taking place, engineers demolished and removed the legacy Flame Trench system, allowing for a replacement to be installed in its place.

The Flame Deflector system for Shuttle included an inverted, V-shaped steel structure covered with a high-temperature concrete material five inches thick that extended across the center of the Flame Trench.

While repair work was conducted on concrete slopes and surfaces around the pad, the Flame Trench work has now moved on past a major milestone on its path to gain a new deflector. This involved the erection of steel and the installation of the large Ignition Over-Pressure/Sound Suppression (IOP/SS) manifold pipe. The deflector will be built around this foundation.

The deflector is shaped like a quarter-pipe skateboard ramp facing the north that will direct the exhaust plume of the SLS Core Stage and SRBs all in one direction out the other end of the Flame Trench.

Work on the design of the deflector involved the use of NASA Ames’ supercomputer, which helped draw up the deflector design – one that could withstand the high heat from plume exhaust, that did not result in plume blow-back, and whose surface pressure was within design margin limits. 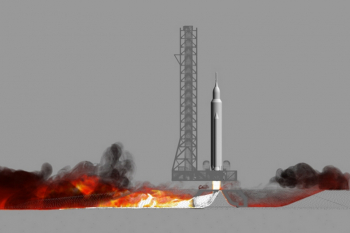 This design has a certain amount of legacy as it is classed as similar to that used during the Apollo era.

Further design work on the new flame deflector continued through 2014, ahead of the confirmation that J. P. Donovan Construction of Rockledge, Florida had been selected as the contractor, with a maximum value of $24.9 million for the contract.

This deflector is known as the ‘universal flame deflector’, tasked with accommodating SLS and other commercial launch vehicles, although only SLS is a confirmed future tenant of the pad at this time.

While Orbital ATK is looking to launch their NGL from 39B, there have been rumblings of SpaceX inquiries into the potential “part lease” of 39B for its subscale BFR vehicle, allowing 39A to continue uninterrupted with its Falcon 9 and Falcon Heavy obligations.

It is unclear if SpaceX had a serious interest in this potential or if KSC had attempted to nudge SpaceX to become part of its much-required elements per its multi-user brief for 39B. It may also be politically toxic for a NASA funded pad to host a subscale BFR – which would be an SLS-class rocket even in its smaller configuration – on the SLS pad. Regardless, SpaceX is still understood to have a primary focus is using 39A for BFR – as shown in the reveal video during Elon Musk’s IAC speech. Word of official work on subscale BFR has been known since the Spring of this year (L2) but officially confirmed by Mr. Musk at last week’s ISSRDC.

Updated information has allowed for a preliminary envisioning process (via L2 Envisioning) with pad engineers and experts evaluating a second, larger, Horizontal Integration Facility (HIF) outside the pad perimeter, allowing the subscale BFR to roll to an additional mount along the same trench at 39A. An article on this 39A option will follow in the coming weeks.

(Images: NASA, L2 SLS and L2 SpaceX (Subscale BFR on 39A via Jay Deshetler, in addition to Cameron Byers and John Archer, based on notes from KSC pad engineers)).