NASA’s Interior Exploration using Seismic Investigations, Geodesy and Heat Transport (InSight) mission is back on track for a 2018 launch after the discovery of leaks in key instrumentation during testing forced NASA to abandon its original 2016 launch date. The spacecraft is now in final testing at its Lockheed Martin facility in Denver, ahead of a unique launch from ULA’s West Coast site.

The InSight mission draws upon a strong international partnership led by Principal Investigator Bruce Banerdt of JPL. The lander’s Heat Flow and Physical Properties Package is provided by the German Aerospace Center (DLR). 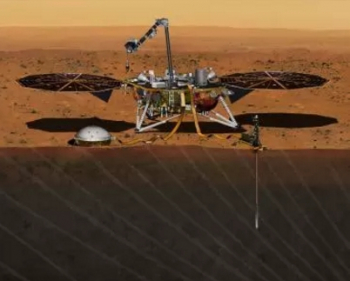 This includes a probe that will hammer itself to a depth of about 16 feet (5 meters) into the ground beside the lander, providing – as the mission’s name suggests – major insight into the interior of Mars.

The spacecraft was on a smooth path towards a 2016 launch, after a processing flow that saw it enter what was known as the ATLO phase of processing in 2014. By May 2015, the lander deployed its solar arrays inside a Denver clean room at Lockheed Martin.

Fully assembled, the spacecraft began a series of rigorous environmental testing. This testing was designed to confirm InSight can survive deep space travel and the harsh conditions of the Martian surface.

During the environmental testing phase, the lander was exposed to extreme temperatures, vacuum conditions of nearly zero air pressure simulating interplanetary space, and a battery of tests.

One of the tests was designed to ensure the seismometer instrument’s main sensors can operate within a vacuum chamber to provide the exquisite sensitivity needed for measuring ground movements as small as half the radius of a hydrogen atom.

A leak had previously prevented the seismometer from retaining vacuum conditions, but was repaired, and the mission team was hopeful that fix would prove to be successful. However, during follow-up testing in extreme cold temperature (-49 degrees Fahrenheit/-45 degrees Celsius) the instrument again failed to hold a vacuum.

The discovery of the issue with the Seismic Experiment for Interior Structure (SEIS) instrument was the responsibility of CNES, not Lockheed Martin.

SEIS was also built with the participation of the Institut de Physique du Globe de Paris and the Swiss Federal Institute of Technology, with support from the Swiss Space Office and the European Space Agency PRODEX program; the Max Planck Institute for Solar System Research, supported by DLR; Imperial College, supported by the United Kingdom Space Agency; and JPL.

“We have fixed the problem we had two years ago, and we are eagerly preparing for launch,” said InSight Project Manager Tom Hoffman, of JPL. Lockheed Martin Space Systems is assembling and testing the InSight spacecraft in a clean room facility near Denver and all appears to be back on track for the next Mars launch window.

“Our team resumed system-level integration and test activities last month,” said Stu Spath, spacecraft program manager at Lockheed Martin. “The lander is completed and instruments have been integrated onto it so that we can complete the final spacecraft testing including acoustics, instrument deployments and thermal balance tests.”

Whichever day the mission launches during a five-week period beginning May 5, 2018, navigators have charted the flight to reach Mars the Monday after Thanksgiving in 2018.

The spacecraft is set to hitch a ride uphill on the United Launch Alliance (ULA) Atlas V rocket flying in her 401 configuration. Interestingly, despite Atlas V’s long list of successful missions with the lofting of numerous spacecraft on deep space missions, this will be the first time an interplanetary mission will have been launched from a West Coast launch site. The only other deep space launch of note from the West Coast was the Clementine mission that was launched to the Moon by a Titan II rocket on January 25, 1994.

Normally, due to the trajectory requirements for spacecraft launched for such missions, the East Coast is the primary site. However, the option to launch from the West Coast was taken due to the relatively small mass of the spacecraft, allowing the powerful Atlas V to have margin left over to conduct the launch from her SLC-3E West Coast launch site at Vandenberg Air Force Base and still send InSight on a path to Mars.

Using the less busy West Coast site also aids the launch window, with multiple opportunities available without the distraction of other rockets, of which there are many on the Eastern Range. This is vital due to the Mars window which this spacecraft has to launch within.

The best planetary geometry for all launches to Mars occurs during opportunities about 26 months apart and lasting only a few weeks.

(Images via Lockheed Martin and ULA).