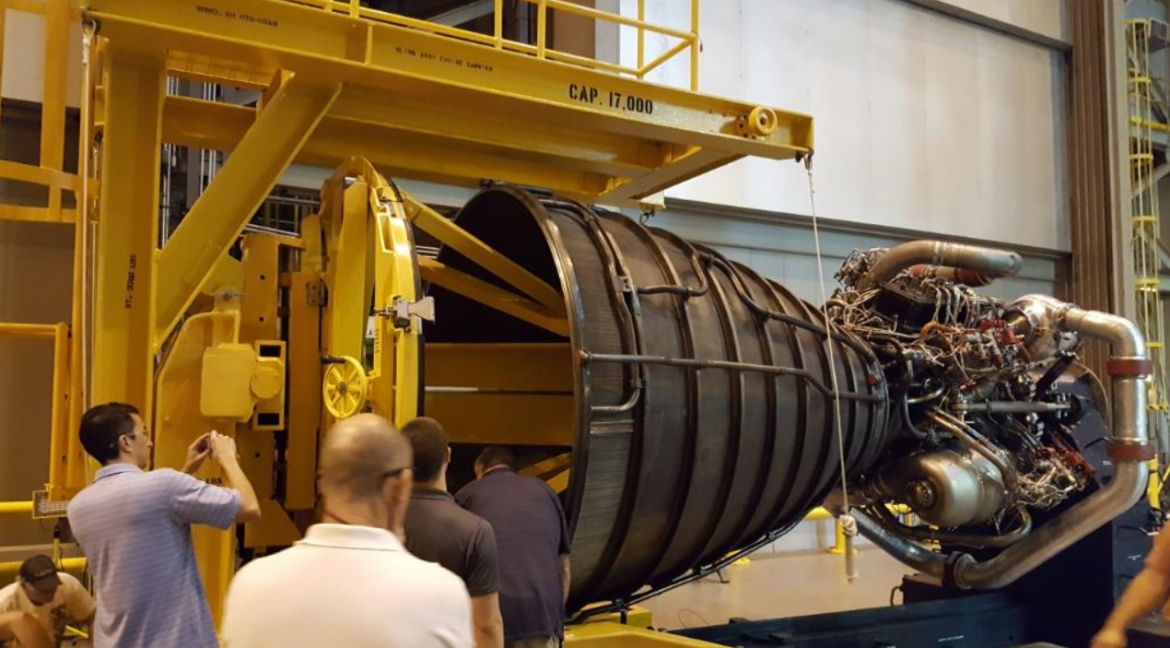 Engineers at the Michoud Assembly Facility (MAF) in New Orleans are using a pathfinder RS-25 engine to practice the installation of engines on the Core Stage of the Space Launch System (SLS). Each core will receive four RS-25s, which are currently undergoing test firings at the Stennis Space Center, ahead of a path that will see them being shipped to MAF.
Pathfinder:

The installation of all four RS-25s on the Core Stage will be a major milestone on the path to Exploration Mission -1, the first launch of SLS.

Test firings at the Stennis Space Center (SSC) continue to serve toward the readiness of that milestone, with the first four flight engines now closing in on shipping to MAF to be installed on Core Stage -1 (CS-1). 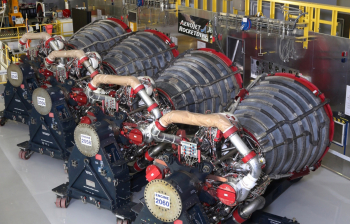 All four of these RS-25s will remain at Stennis until MAF engineers have completed the work on CS-1. The latest schedule shows the four engines will make the journey to New Orleans in May of next year.

For the interim period, a Pathfinder engine is being used to ensure a smooth flow for when the flight engines arrive.

Pathfinder engine is a Shuttle-era SSME and includes powerhead 2107; in its original configuration as powerhead 2007, it flew as one of the foundational elements of engine 2007 on the first five Space Shuttle flights in 1981 and 1982. 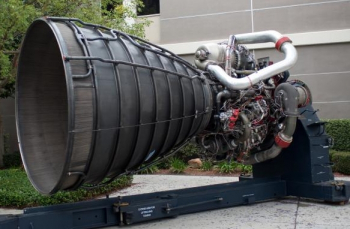 It was then reconfigured as the 2107 powerhead and flew an additional eight Shuttle launches. The main combustion chamber and the nozzle of the Pathfinder are both non-flight, ground-only units.

According to L2 SLS information, the RS-25 Pathfinder provides a “hands-on” engine mock-up for training technicians and mechanics on critical engine operations without having to use critical flight hardware.

Engine installation will involve newly-integrated ground support equipment modified from the Shuttle program and the Shuttle-heritage Pathfinder hardware is being used for practice before handling the flight engines. 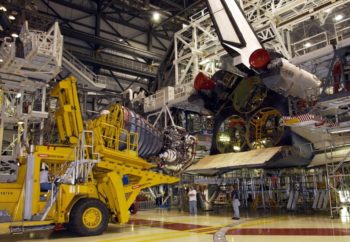 “We’ve taken some of the installation hardware for the engines from the same hardware that we used to load the engines into the (Space Shuttle) orbiter,” noted Patrick Whipps, NASA resident manager at MAF for the SLS Core Stage in a previous interview with NASASpaceFlight.com

“We haven’t brought the big tractor with us, but the business-end that actually touches the engines is going to be used – it worked great for all the orbiters.

“We’ve taken another approach to have a driveable vehicle (and) it will have upper and lower stages so we can load engines, two at the top, two at the bottom.”

The latest information notes that the first training operations have already been completed, which included offloading of the engine; transporting the engine through MAF to the RS-25 engine area, removal of the engine from the shipping container, and load transfer operations from the engine shipment dolly to the engine installer.

“The RS-25 Pathfinder allowed for a first run of initial MAF engine operations to ensure that the technicians, paperwork, and infrastructure are truly ready for flight operations,” added the notes.

“This is especially important since the Engine/Stage Integration team is now a blended Aerojet Rocketdyne/Boeing team with limited experience in initial engine/stage integration activities in a facility where this work has not been performed before.” 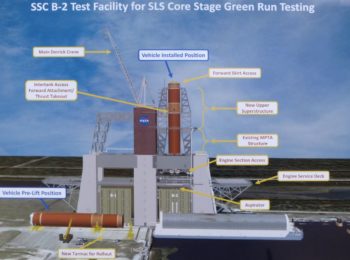 Once all four of the flight engines have been installed on CS-1, another major milestone will see the engines return to Stennis, this time as a team.

The latest schedule calls for the CS-1, with its engines, to be delivered to Stennis in the modified Pegasus Barge by December of next year where CS-1 will be integrated on the reactivated B-2 Test Stand.

CS-1 will undergo two major tests on B-2, with a Fill and Drain test, effectively a Wet Dress Rehearsal (WDR) in March of 2019, followed by all four engines firing up on the Green Run hotfire test the following month. 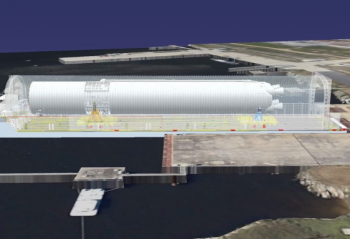 Should all go to plan with the firing, CS-1 will be loaded on to the Pegasus Barge once again for a June shipping to the Kennedy Space Center (KSC) in Florida, where it will be officially handed over to the Ground Systems Development & Operations (GSDO) team.

CS-1 will take up residency in the Vehicle Assembly Building (VAB) ready for stacking operations on the Mobile Launcher (ML).

The middle part of 2019 will see the build-up of the EM-1 vehicle, with the Interim Cryogenic Propulsion Stage (ICPS) – which has already arrived and handed over to GDSO – and the EM-1 Orion, itself undergoing final processing at KSC’s Operations & Checkout (O&C) Building, all joining CS-1 in the VAB.

The entire stack will then rollout to Pad 39B for testing, including a WDR, before rolling back for final ordnance installation. A final rollout for launch will then take place, which is expected to be a launch date no earlier than the end of 2019, but more likely in 2020.

Iridium NEXT-4 on track for December launch from Vandenberg