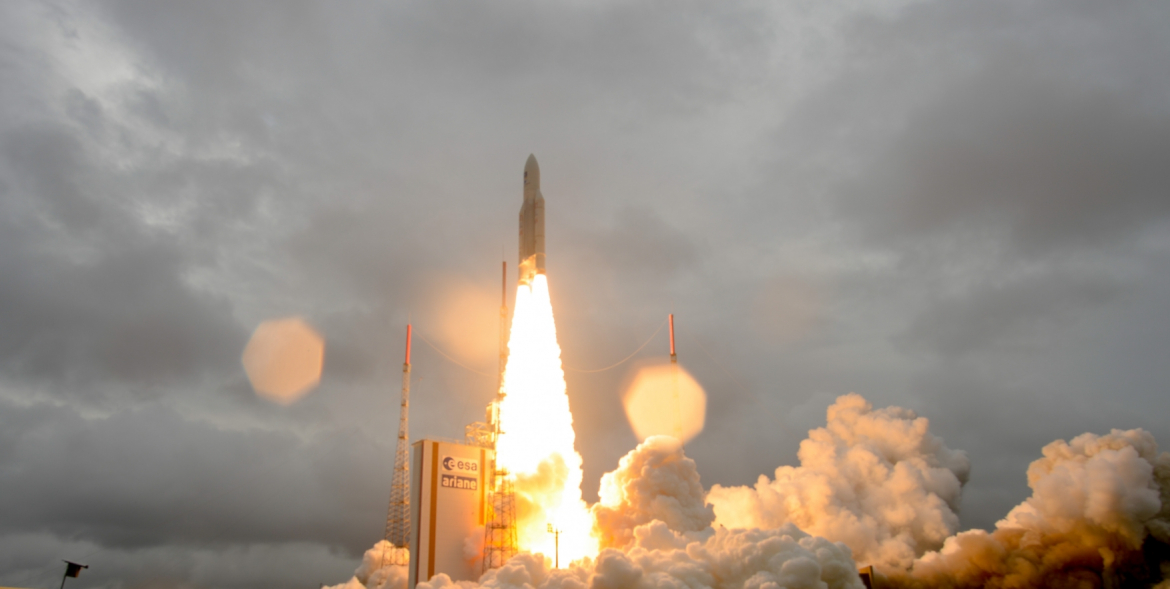 An Ariane 5 ES rocket has lofted another four Galileo satellites from the European Spaceport in Kourou, French Guiana on Tuesday. The launch – the 11th of the year for Arianespace – of the FM-15 through FM-18 involves the second use of the Ariane launch vehicle for a Galileo launch, following a previous run with the Soyuz rocket. Launch was on schedule at 18:36 UTC.

The Ariane 5 ES – which has previously been used to loft Automated Transfer Vehicles (ATV) to the International Space Station – has an estimated LEO launch capacity of 21,000 kg (46,000 lb).

It includes all the performance improvements of Ariane 5 ECA core and boosters but replaces the ESC-A second stage with the restartable EPS used on Ariane 5 GS variants. 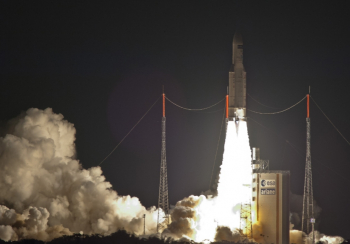 Arianespace mainly relies on its Ariane 5 ECA variant. However, the ES has found a role with the Galileo launches.

The launch – designated as Flight VA240 – marked the end of another busy year for Arianespace, which has seen 10 missions from French Guiana so far in 2017 – involving five launches of the heavy-lift Ariane 5, two with the medium Soyuz and three with the lightweight Vega.

The complete Galileo constellation will consist of 24 operational satellites along three orbital planes in medium Earth orbit (including two spares per orbit). The result will be Europe’s largest ever fleet of satellites, operating in the new environment of medium-Earth orbit.

Europe’s own GPS constellation was deemed to be a major requirement, so as to ensure it wasn’t stuck with having to rely on US or Russian systems. This decision is more apt given the increasingly uncertain geopolitical climate that has followed since Galileo’s inception.

The final use of the Soyuz rocket took the system to Full Operation Capability (FOC), followed by the first with the Ariane ES, which was the eighth Galileo mission – bringing the number of satellites in space up to 18. 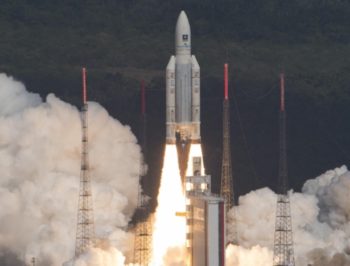 Those four satellites were named Antonianna, Lisa, Kimberley and Tijmen – named for winners of a European children’s drawing contest.

Issues during previous launches with Soyuz rockets has caused some replanning of the full deployment schedule. However, the successful first use of the Ariane 5 ES with these satellites has raised the optimism of ESA bosses.

“Now that we can rely on the powerful Ariane 5, we can anticipate the quicker completion of Galileo deployment, permitting the system to enter full operation,” noted Paul Verhoef, ESA’s Director for the Galileo Programme and Navigation-related Activities.

The full system of 24 satellites plus spares is expected to be in place by 2020. 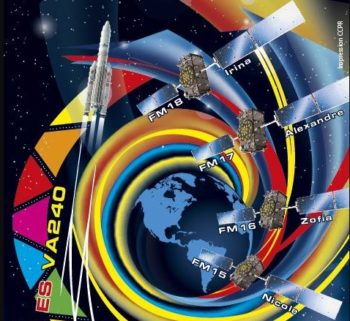 The next four launching on this latest mission also received their own names, Irina, Alexandre, Zofia, and Nicole.

They weigh between 715 kg. and 717 kg., and were built by OHB System in Germany with U.K.-based Surrey Satellite Technology supplying the navigation payloads.

The A5 dispenser system will keep the quartet of Galileo satellites in place during ascent, before deploying them in rapid sequence at a targeted release altitude of 23,222 km.

The 447 kg dispenser, designed by Airbus Defence and Space, is made from a combination of metal and composite materials for maximum stiffness, the dispenser has undergone very comprehensive testing at Airbus Defence and Space near Bordeaux, France, and the IABG testing centre in Ottobrunn, Germany – using both Galileo engineering models and an actual flight satellite, including fit, shock and separation testing. 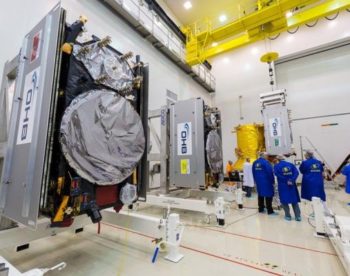 The target orbit is actually 300 km below the Galileo constellation’s final working altitude: this leaves the Ariane’s EPS upper stage in a stable ‘graveyard orbit’, while the quartet of Galileos manoeuvre themselves up to their final set height.

The test campaign met all objectives, confirming the behavior performs as predicted, after which the dispenser was shipped to Europe’s Spaceport in French Guiana. It performed well during the previous mission during which it debuted.

This mission is being performed on behalf of the European Commission under a contract with the European Space Agency (ESA). 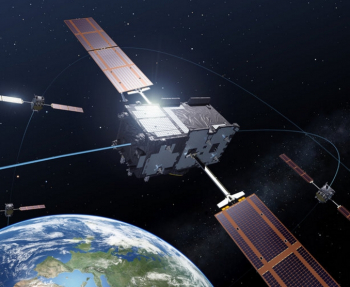