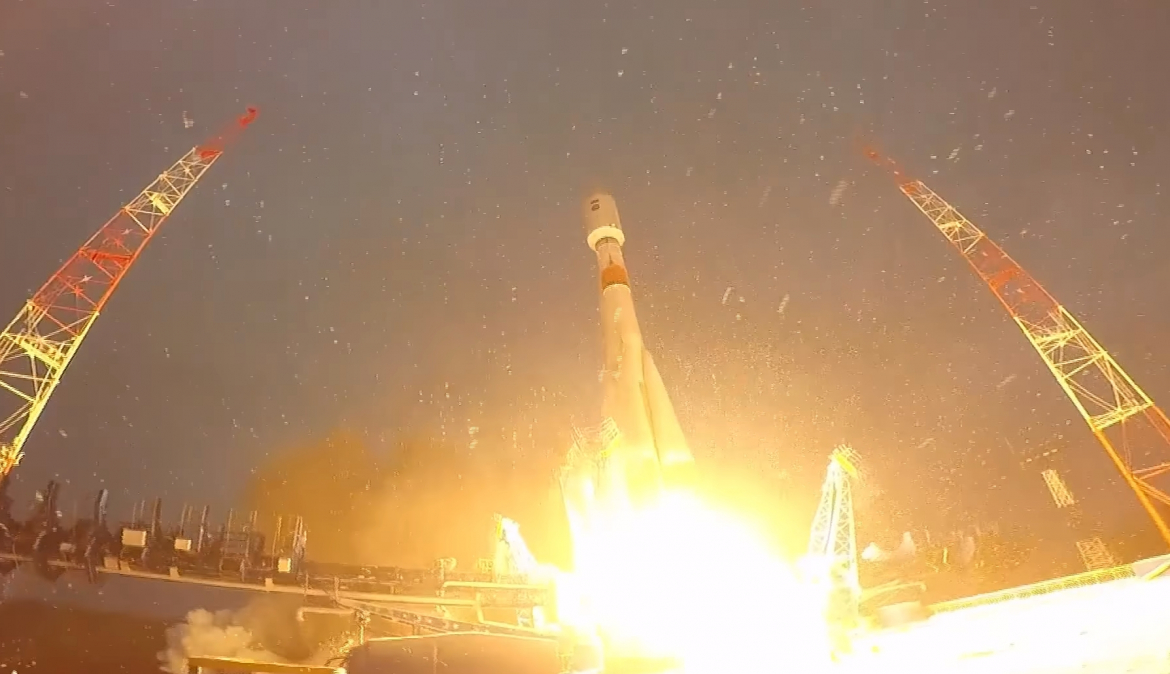 Russia conducted another launch of its Soyuz-2-1b rocket Saturday, carrying a military Lotos signals intelligence satellite to orbit. Saturday’s launch – Russia’s first since a Soyuz-2-1b/Fregat-M failure earlier this week – took place at 13:43 local time (10:43 UTC). This mission was declared to be a success by Roscosmos.

Saturday’s Soyuz mission came just four days after its failed launch of the Meteor-M No.2-1 weather satellite and eighteen smaller payloads. Details of that failure are still emerging, and Russia has formed an emergency commission to investigate. However, suspicion is falling upon the rocket’s Fregat-M upper stage. Saturday’s launch used a three-stage Soyuz-2-1b, which does not include a Fregat. 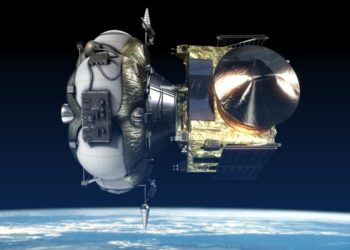 This burn was intended to inject Fregat and its payload into an initial parking orbit, but instead powered the spacecraft to an unplanned reentry over the Atlantic Ocean. The investigation seems to be focusing on how Fregat’s guidance system aligns the stage’s gyroscopes.

There is no indication that the core Soyuz-2-1b vehicle, nearly identical to the one which will be used for Saturday’s launch, was culpable for the failure and Roskosmos cleared it on Friday to return to flight. Saturday’s mission, which carried a Lotos intelligence-gathering satellite, did not require an upper stage so wasn’t impacted should Fregat’s reliability be called into question. 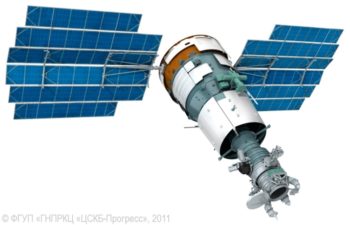 The first-generation Tselina system consisted of two types of satellite – Tselina-O which detected electronic transmissions and Tselina-D conducted follow-up observations once signal sources of interest had been identified. The Tselina-O series was discontinued in 1982 but Tselina-D continued to launch until 1994. A second-generation series, Tselina-2, was introduced in 1984. Its last launch took place in June 2007.

A prototype Lotos satellite, Lotos-S or Kosmos 2455, was launched by a Soyuz-U carrier rocket in November 2009. The first operational satellite, Kosmos 2502, was deployed by a Soyuz-2-1b in December 2014.

The satellite was constructed by the TsSKB Progress design bureau, using a bus derived from the long-running Yantar series of reconnaissance satellites that has been at the center of many of Russia’s recent military satellite projects. Lotos’ intelligence-gathering payload was developed by the Arsenal bureau.

In addition to Lotos, the Liana programme also includes a second series of spacecraft – Pion-NKS – which will succeed Russia’s US-PM naval reconnaissance satellites. The first Pion satellite has not yet been launched.

The Soyuz-2-1b is a three-stage rocket under Russian nomenclature – with the first and second stages both igniting about sixteen seconds before liftoff and burning in parallel up to first stage separation, 118 seconds into the flight.

The first stage consists of four liquid-fuelled boosters clustered around the second stage at their core. Each of the first stage boosters is powered by an RD-107A engine, while the core uses the closely-related RD-108A. All three stages of Soyuz burn RG-1 propellant – a form of refined petroleum similar to the US RP-1 fuel – oxidized by liquid oxygen.

Powered by an RD-0124 engine, Soyuz-2-1b’s third stage, or Blok-I, completed the final phase of powered flight for Saturday’s launch, injecting the payload into orbit. Shortly after the third stage concludes its burn, the Lotos spacecraft separated into low Earth orbit.

Once in orbit the satellite is expected to receive the name Kosmos 2523, following the naming convention for military spacecraft that Russia – formerly the Soviet Union – has used since 1962. 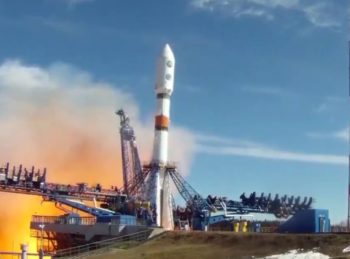 First flown in 2006, the Soyuz-2-1b is one of three current-generation versions of Russia’s legendary Soyuz series of rockets. Soyuz-2-1b differs from the closely-related Soyuz-2-1a through the use of an upgraded third stage with the RD-0124 engine. Soyuz-2-1a uses instead the same RD-0110 engine as used by its predecessors.

Both the Soyuz-2-1a and 2-1b are modernized versions of the previous-generation Soyuz-U, incorporating uprated engines and new digital flight control systems.

The third member of the Soyuz-2 series, the Soyuz-2-1v (v being the third letter of the Cyrillic alphabet) is a two-stage version of Soyuz-2-1b, without the four boosters that normally comprise the rocket’s first stage and with an NK-33 engine in place of the RD-108A on its first – or Soyuz-2-1b’s second – stage. It is suited to launching smaller satellites. 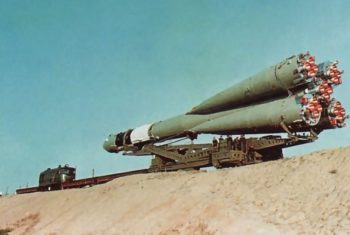 Soyuz itself was introduced in 1966 as an enhanced version of the earlier Voskhod, and was first tasked with launching the then-new Soyuz spacecraft in support of the Soviet manned space program.

A new version of the rocket, Soyuz-U, was introduced in 1973 as a standardized replacement for several rockets including Voskhod and the original Soyuz. Soyuz-U made more launches than any other rocket ever developed, finally retiring from service after launching a Progress resupply mission to the International Space Station in January of this year.

Soyuz traces its ancestry back to Sergei Korolev’s R-7 missile, the world’s first intercontinental ballistic missile, which was first launched in May 1957. Other derivatives of the R-7 include the rocket that launched Sputnik in October 1957, the Vostok rocket that boosted Yuri Gagarin into orbit in 1961 and the Molniya and Molniya-M vehicles that carried communication and missile detection satellites into the class of high orbit to which they have given their name. 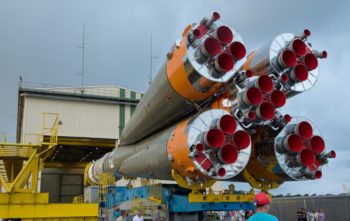 Soyuz launches from pads at the Baikonur and Plesetsk Cosmodromes that were originally built for the R-7 missile, along with newly-built launch complexes at the Vostochny Cosmodrome and the European Centre Spatial Guyanais in Kourou, French Guiana. A total of eight launch pads have been built – two at Baikonur, four at Plesetsk and one each at the other sites.

Saturday’s launch was expected – although not confirmed – to take place from Plesetsk’s site 43/3, which has not been used since it was damaged by a failing Soyuz-U rocket in October 2002. However, Russian media later noted it took place from 43/4.

Like all of the other Soyuz launch pads at Plesetsk, this complex was originally built for operational deployment of the R-7A missile, however Site 43/3 was never used for a missile launch. The first launch from the pad was made by a Voskhod rocket in February 1971, carrying Kosmos 396, a Zenit-4M imaging satellite. 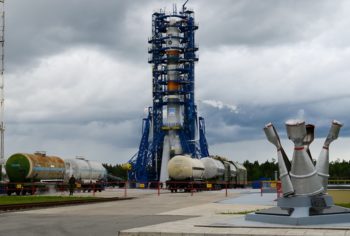 The pad hosted the maiden flight of Voskhod’s replacement – Soyuz-U – in May 1973. Voskhod was retired in 1976, with its penultimate flight occurring from Site 43/3, and its final launch from Baikonur. In addition to Soyuz-U rockets, between 1975 and 1983 the Vostok-2M and Molniya-M vehicles also made flights from Pad 3.

The pad was inactive from July 1983 until the end of 1986, when Molniya-M and Soyuz-U launches from the site resumed. These continued until the incident in October 2002.

During October 2002 launch, which was to have seen the Soyuz-U orbit Foton-M No.1 – a microgravity research satellite – one of the four first-stage boosters broke away from the rocket seconds liftoff. 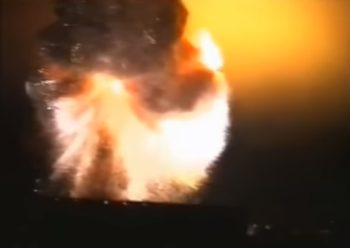 The detached booster fell back onto the launch pad with the rest of the rocket coming down about a kilometer from the pad. Ivan Marchenko, a private in the Russian Army, was killed by a falling window frame in a nearby building, while eight others sustained injuries.

Over the last few years Pad 43/3 has been refurbished and upgraded to accommodate Soyuz-2 vehicles, and is expected to return to service with the nearby site 43/4 pad. However, not for this launch, as later noted.

Site 43/4 has been used for all Soyuz-2 launches from Plesetsk to date, beginning with the Soyuz-2-1a’s maiden flight in 2004.

The next Soyuz launch following Saturday’s mission is currently expected to take place from the Baikonur Cosmodrome on 17 December, with a Soyuz-FG rocket carrying the Soyuz MS-07 spacecraft to orbit with three members of the Expedition 54 and 55 crew of the International Space Station.

An unmanned Soyuz-2-1a/Fregat-M launch was slated for a 22 December launch from Vostochny, however it is unclear whether this will be delayed following Tuesday’s failure. The next launch from Plesetsk is expected to use a Soyuz-2-1v rocket, and will take place no earlier than 27 December.