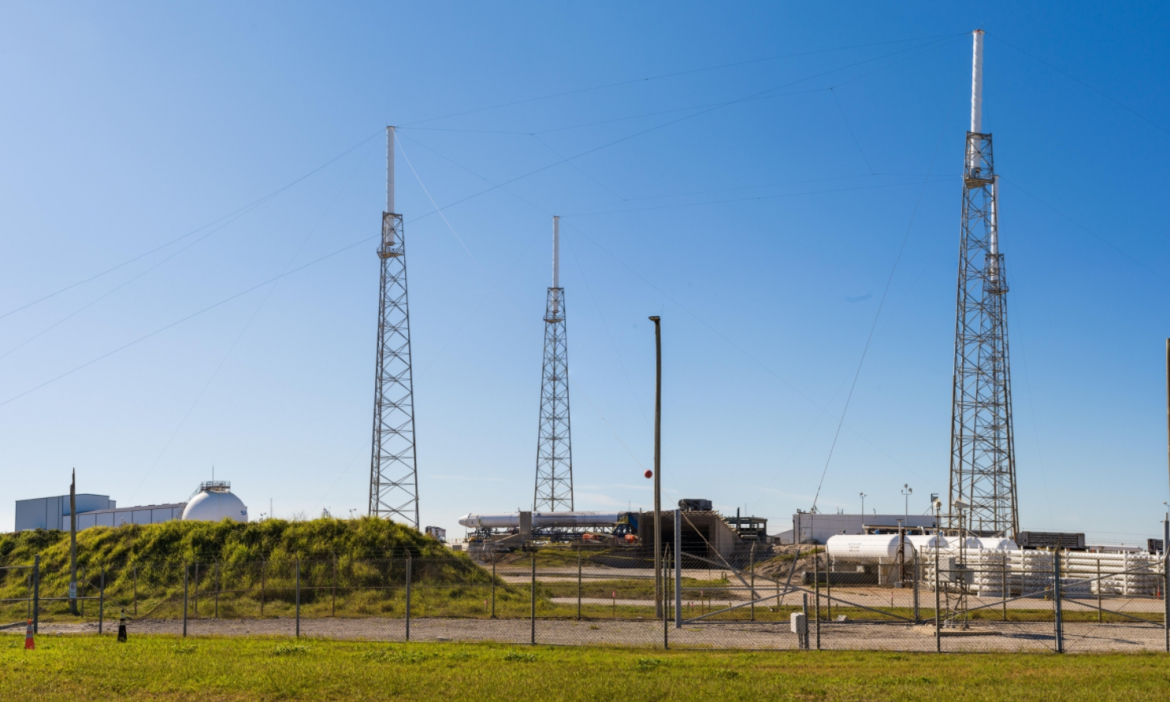 Fifteen months after a static fire accident removed SLC-40 from operation, SpaceX is complete with the rebuild and reactivation of its Cape Canaveral Air Force Station pad.  The planned static fire of the flight-proven Falcon 9 booster for the CRS-13 mission, which was moved several times, the latest to Wednesday, provides the final validation and verification steps for pad 40 ahead of its planned use to launch CRS-13 to the Space Station on 12 December.

SLC-40 – from accident to reactivation:

To say that the recovery, rebuild, and reactivation of SLC-40 is anything less than an engineering marvel is an understatement. 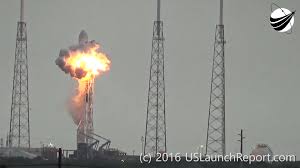 When the conflagration of the AMOS-6 stack occurred on 1 September 2016 ahead of the mission’s planned static fire, the brunt of the destruction severely damaged SLC-40’s systems and hardware, including its TEL (Transporter/Erector/Launcher), launch mount, cross-country propellant feed lines, and a significant portion of the pad’s electrical and data lines.

Nevertheless, assessments of the pad revealed a significant effort and timeline to rebuild and repair SLC-40, work that did not begin in earnest until February 2017 – over five months after the accident.

The reason for the delay was linked directly to the activation of neighboring LC-39A on the Kennedy Space Center, a pad SpaceX had previously leased and was in the final process of rebuilding and activating for both single stick Falcon 9 and Falcon Heavy launches.

At the time of the AMOS-6 accident, LC-39A was nearing completion, and the decision was made to focus almost all the agency’s pad construction crew’s effort on finalizing 39A before moving over to pad 40.

This was an overall strategic decision as activation of pad 39A allowed SpaceX to continue launching its manifest of East Coast Falcon 9 missions largely uninterrupted – a decision that paid off quite well as the company has shattered its own yearly launch record and stands to achieve a wildly impressive 18 Falcon 9 launches this year alone – 12 of which have taken flight from LC-39A. 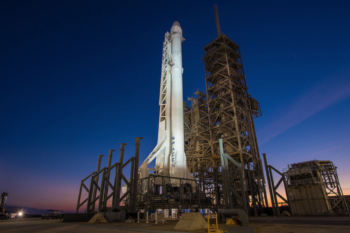 And the all-out effort to rebuild SLC-40 began.

In the five months that intervened the AMOS-6 conflagration and the full-up commencement of the reconstruction effort at pad 40, numerous operations took place at the pad to assess its damage, clear as much debris as possible, and begin building/ordering equipment needed for the rebuilding effort. 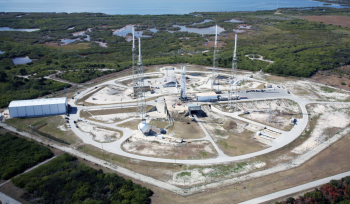 Moreover, lessons learned in the building and activation of LC-39A were carried over and implemented at SLC-40.

SpaceX was also able to incorporate numerous design changes and equipment upgrades to pad 40, such as new and improved hold down clamps, a brand-new TEL with the same throwback ability debuted on the TEL at LC-39A, as well as brand new GSE (Ground Support Equipment) plumbing and electrical and data lines.

In particular, the throwback maneuver of the TEL at T0 will greatly aid – as it has at Pad-39A – SpaceX’s ability to turn the pad around rapidly between missions. 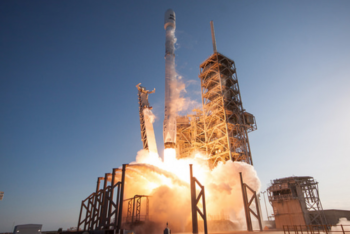 The throwback maneuver clears the TEL from the exhaust plume of a launching Falcon 9, protecting connection points, seals, and propellant lines that can then be reused instead of being replaced after each mission – as was the case for some elements of the previous TEL at SLC-40.

The ability to rapidly turn around both SLC-40 and LC-39A for East Coast missions will immensely benefit SpaceX as they head into 2018, a year when at least 31 missions of the Falcon family of rockets are planned.

Moreover, the fact that SpaceX essentially rebuilt SLC-40 in just 10 months (February – November 2017) speaks volumes to the company’s ability to recover from unforeseen events as well as the robustness of the initial pad build and design, with some elements of SLC-40 weathering the AMOS-6 conflagration quite well.

In a coincidental alignment of missions and launch dates, NASA will once again be the SpaceX customer to launch from a newly rebuilt SpaceX pad this year. 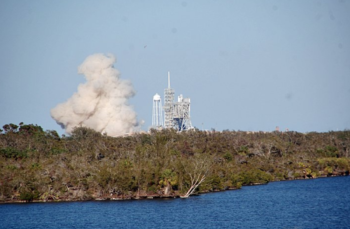 Moreover, the same booster that launched the CRS-11 mission in June will be the booster that now undergoes static fire verification and validation testing at SLC-40 before launching CRS-13. 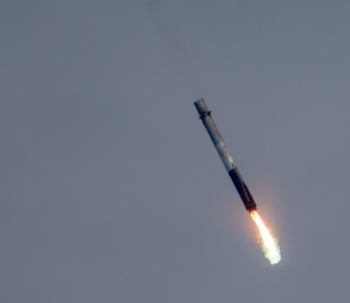 As first reported by NASASpaceflight in October, NASA will utilize the flight-proven CRS-11 booster for CRS-13, becoming SpaceX’s first overall customer to refly the same booster for two of its missions and the first U.S. Federal government agency to use a flight-proven Falcon 9.

While the final decision to use a flight-proven booster for CRS-13 is confirmed by sources to have been made by NASA in October, NASA only confirmed the decision through Bill Gerstenmaier’s presentation to the NASA Advisory Council (NAC) this week. 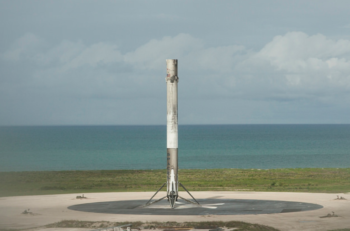 Even after Mr. Gerstenmaier’s statement to the NAC, NASA has still yet to release a public statement on the decision, opting instead to respond only to individual news outlet requests for comment.

Regardless, Mr. Gerstenmaier’s statements to the NAC revealed that SpaceX developed processes to examine and certify flight-proven booster use for NASA.

A subsequent NASA review of those processes and results revealed what SpaceX’s previous flight-proven customers (SES, Bulsatcom, Spacecom Ltd, and Iridium) had previously determined: That there is no increased risk in using a flight-proven Falcon 9. 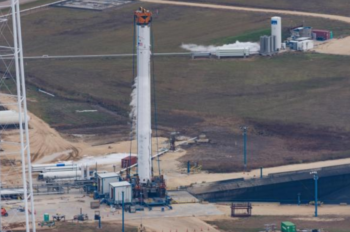 Despite sources confirmation that the decision to use a flight-proven booster for CRS-13 was made in October, NASA appears to have reserved the right to change its mind until quite recently, with a publically available presentation slide indicating that a brand-new Falcon 9 first stage went through acceptance testing at McGregor as a contingency to the CRS-13 flight-proven booster plan.

Regardless, with the flight proven booster plan now confirmed, final operations at SLC-40 are underway to prepare the pad for the all-important static fire, which could have come as early as this weekend. 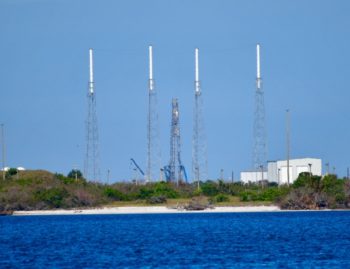 Based on requests to the Eastern Range, SpaceX planned for the static fire to occur on Saturday, 2 December in a window extending from 12:00-18:00 EST (17:00-23:00 UTC). However, as pad work is finalized, this has since moved several times, the latest to Wednesday morning.

Based on the activation and static fire verification and validation efforts with 39A, SpaceX will work out the quirks of its newly reactivated pad ahead of the actual launch. As such, teething issues can be expected ahead of the launch.

The LC-39A static fire was originally planned for 10 February but occurred on the 12th after a three-day campaign.

Even with the Static Fire taking place as late as Tuesday, there appeared to be enough give in the schedule to the planned 8 December launch date to account for such delays without affecting the launch date. However, the launch date slipped to 12 December, per official confirmation from NASA. 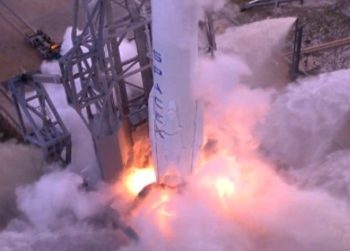 As has been the case all year, the static fire took place without the payload attached to the top of the Falcon 9.

Once the static fire was achieved, cited as 3pm Eastern, an initial data review provided a first glance clearance for the pad teams to proceed with vehicle safing and transfer back to the HIF, where the Falcon 9 will be mated to its Dragon payload.

The final data review and complete overview of the Falcon 9, Dragon, the International Space Station, and SLC-40 will take place at the traditional L-2 day Launch Readiness Review.

The entire vehicle will then be transported back to pad 40, where it will be erected to its vertical launch position for final count operations.

CRS-13 on a flight-proven Falcon 9 with a previously-used Dragon capsule – the Dragon used for CRS-6 in 2015 – is scheduled to launch from SLC-40 at the Cape Canaveral Air Force Station, Florida – marking the pad’s return to launch action.