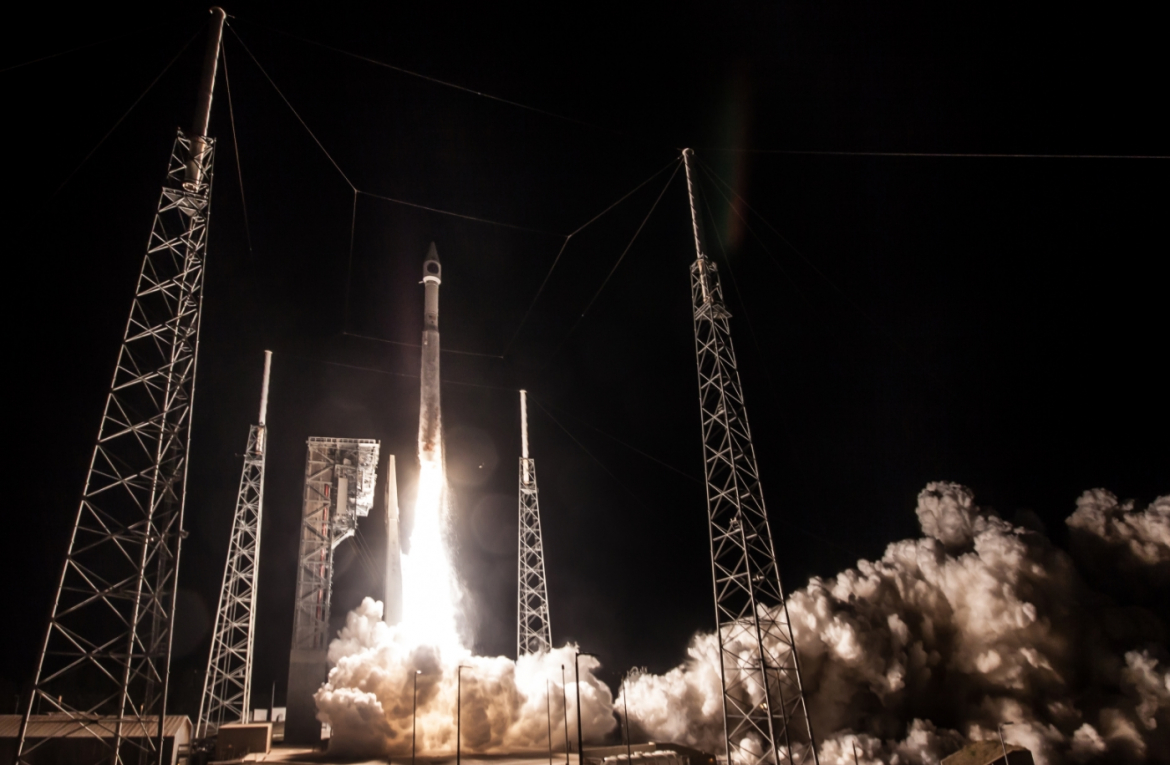 United Launch Alliance’s Atlas V has launched on her seventy-fifth flight, lofting the SBIRS GEO-4, a missile early warning satellite. Following a scrub on Thursday, Friday’s attempt was issue free, launching at the opening of the window at 19:48 Eastern time (00:48 UTC on Saturday).

SBIRS GEO-4 is the fourth geostationary satellite in the Space Based Infrared System (SBIRS), a constellation of satellites that use infrared sensors to detect and track missile launches.

Replacing the Defense Support Program (DSP), a fleet of satellites that began watching for missile launches in the 1960s, SBIRS is designed to provide the United States with advance warning of an enemy nuclear strike, while also allowing the country to monitor other missile and rocket launches around the world. 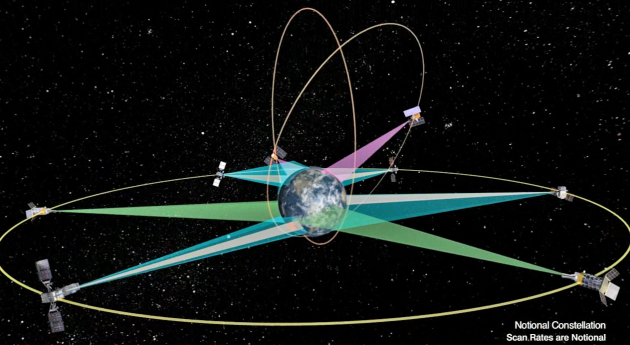 SBIRS was also to have incorporated satellites in low Earth orbit, SBIRS-LOW, however these were canceled long before deployment was to have begun. The Space Tracking and Surveillance System (STSS) was developed instead, using hardware that had originally been built for SBIRS.

As well as detecting missile launches, SBIRS is also used for intelligence-gathering, helping to identify and characterize events that result in the emission of infrared radiation and to improve general battlefield awareness.

The SBIRS GEO-4 satellite was constructed by Lockheed Martin. Based on the A2100M platform, it carries two infrared sensors: a scanning sensor which watches the full disc of the Earth for infrared events and a “staring” sensor to detect smaller short-range missiles which do not produce as much infrared radiation. The satellite has a mass of about 4,500 kilograms (9,920 lb) and is intended for a twelve-year mission. 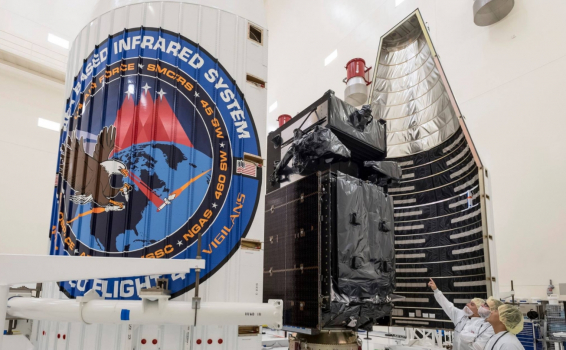 GEO-4 was the third geostationary SBIRS satellite to be built, Satellite Vehicle 3 (SV-3). Construction of the satellite was completed before it was required to launch, so the spacecraft was placed into storage. The US Air Force later opted to launch Satellite Vehicle 4 (SV-4) first as SBIRS GEO-3, saving the cost of putting the newly-completed SV-4 into storage and additional testing that would be needed upon taking it back out.

United Launch Alliance performed the launch, using an Atlas V rocket. The two-stage Atlas V consists of a Common Core Booster (CCB) first stage, which is powered by an RD-180 engine, and a Centaur upper stage. Up to five Aerojet AJ-60A solid rocket motors can be clustered around the first stage to increase the rocket’s payload capacity, while single and dual-engine versions of the Centaur are available. Payload fairings with diameters of four or five meters (13-16 feet) are available, with three different lengths available for each diameter.

The Atlas, with the tail number AV-076, flew in its 411 configuration with a four-meter payload fairing, single-engine Centaur (SEC) upper stage and a single solid rocket booster. The launch used a Long Payload Fairing (LPF), which despite its name is the shortest of the three four-meter fairings with a length of 12.2 meters (40 feet).

This Atlas configuration differs from the 401 version used for the previous three SBIRS GEO launches – which did not use any solid rocket boosters. The change of configuration has ostensibly been made to ensure Centaur can be deorbited after spacecraft separation, helping to mitigate space debris. On previous SBIRS launches, Centaur has remained in a disposal orbit, close to geostationary transfer orbit, at the end of its mission.

The launch took place from Space Launch Complex 41 (SLC-41) at the Cape Canaveral Air Force Station on Florida’s Space Coast. Atlas V’s East Coast home, SLC-41 was originally built as part of the Titan IIIC’s Integrate-Transfer-Launch (ITL) complex, along with nearby Space Launch Complex 40 – now used by SpaceX – and a shared vertical integration facility which has since been demolished. 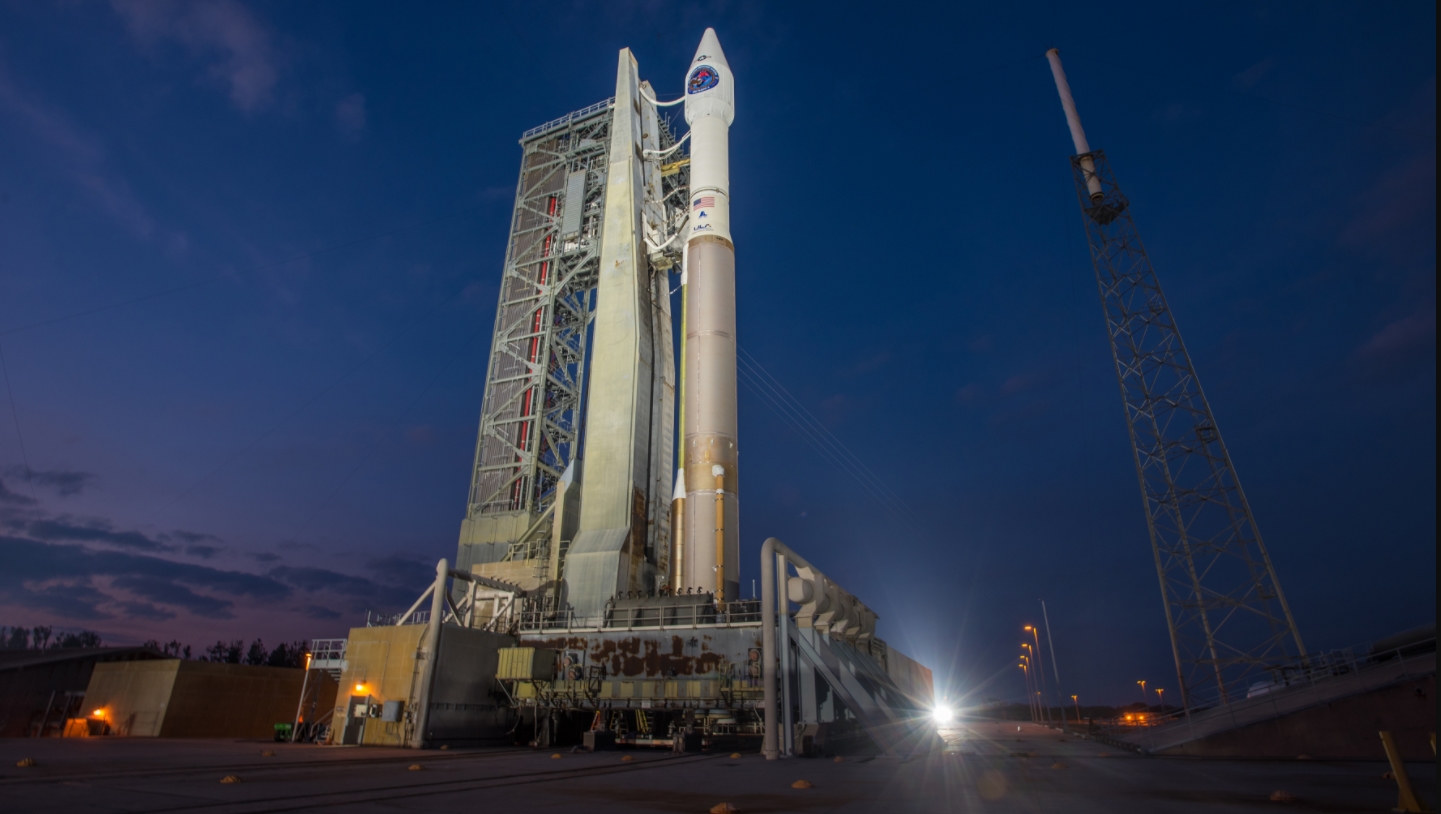 The first rocket to launch from Launch Complex 41 (LC-41), as it was then named, was the third Titan IIIC which lifted off in December 1965. The launch, which carried a pair of Lincoln Experimental Satellites (LES-3/4) reached a lower-than-planned orbit. In the early 1970s the pad was selected to serve as a launch site for Titan IIIE, a modified version of Titan with a Centaur upper stage to support NASA’s deep space missions, including the Viking probes to Mars, the Voyager missions to the outer planets and the Helios solar research satellites. Seven Titan IIIE vehicles were launched from LC-41 between 1974 and 1977.

After the final Titan IIIE launch – which sent Voyager 1 on its journey to Jupiter, Saturn and beyond the Solar System – LC-41 fell out of use. The pad was rebuilt ahead of the introduction of the Titan IV, which made its maiden flight from the pad in June 1989. The last two Titan launches from pad 41 both failed – in August 1998 the final Titan IVA was destroyed by range safety after an electrical fault caused its guidance system to malfunction, while the following April an upper stage issue saw a Defense Support Program satellite left stranded in a lower-than-planned orbit.

Following its last Titan launches, SLC-41’s fixed and mobile service towers were demolished and the site was rebuilt for Atlas V and its clean pad approach. A new fixed tower has more recently been constructed at the pad, however this does not play a role in most launches: it will be used to provide crew access for future manned launches with Boeing’s Starliner spacecraft.

When it launches from SLC-41, Atlas V is assembled atop a mobile launch platform in the Vertical Integration Facility (VIF), about 550 meters (1,800 ft) south of the pad. In preparation for the launch, Atlas was transported to the launch pad on Wednesday.

Atlas V was originally developed by Lockheed Martin as part of the US Air Force’s Evolved Expendable Launch Vehicle (EELV) program, along with Boeing’s Delta IV. The Atlas V made its maiden flight in August 2002, carrying Eutelsat’s Hot Bird 6 communications satellite into orbit as part of a commercial mission contracted by International Launch Services (ILS). This launch marks its seventy-fifth flight. 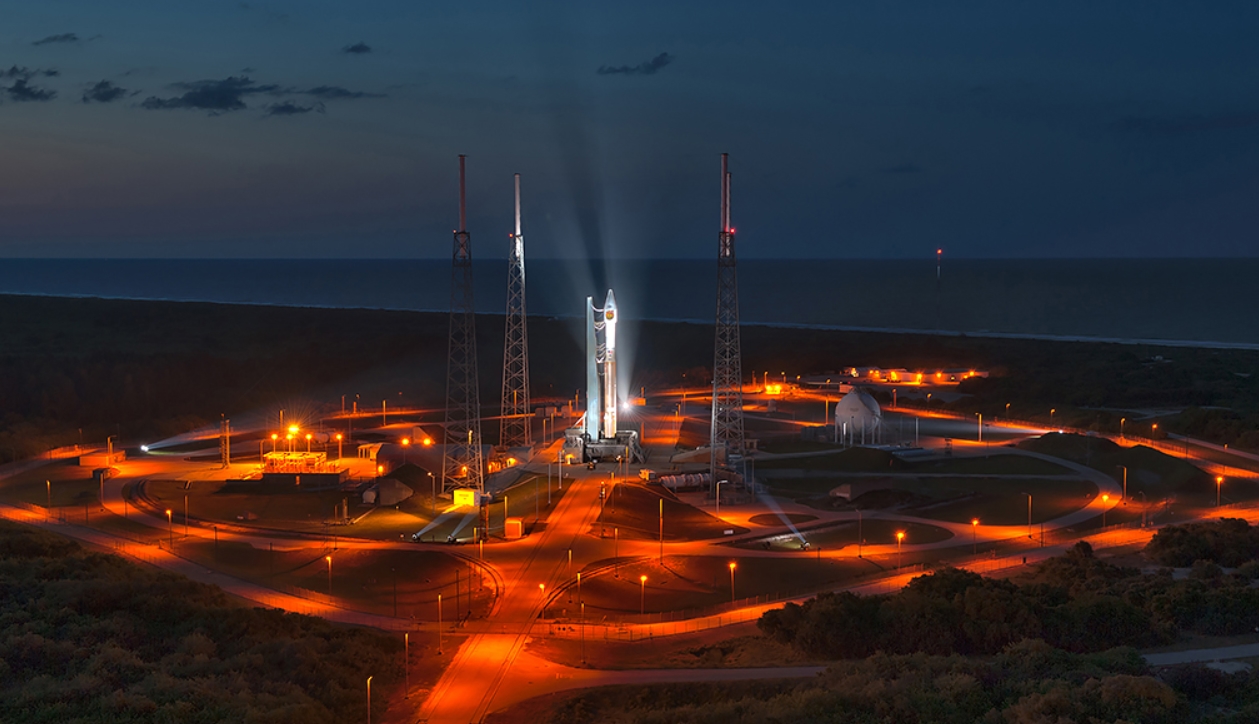 The SBIRS launch began with ignition of Atlas’ RD-180 engine, 2.7 seconds before the countdown reached zero. Burning RP-1 propellant oxidized by liquid oxygen, the RD-180 is a twin-chamber engine derived from the four-chamber RD-170 series developed for the Soviet Union’s Zenit and Energia rockets. The RD-180 is built by Russian firm NPO Energomash.

At about T+1.1 seconds, the AJ-60A solid rocket motor ignited and AV-067 lifted off. The rocket began a series of pitch and yaw maneuvers 6.8 seconds into its flight, putting it on an easterly course over the Atlantic Ocean towards geostationary transfer orbit. Atlas reached Mach 1, the speed of sound, 57.9 seconds after liftoff, passing through the area of maximum dynamic pressure – Max-Q – 13.3 seconds later.

The AJ-60A burned for about 98 seconds before tailing off and burning out. The spent casing remained attached to Atlas’ Common Core Booster until two minutes and 20.5 seconds into flight, at which point it was jettisoned. The CCB itself continued to burn until booster engine cutoff (BECO) occurred at four minutes and 3.3 seconds mission elapsed time.

Six seconds after cutoff, the Common Core Booster separated from the Centaur upper stage. Centaur’s single RL10C-1 engine began its chilldown and prestart sequences, with the engine igniting 9.9 seconds after stage separation. The rocket’s payload fairing separated from Centaur 8.1 seconds into the first of the stage’s three planned burns. The first burn, to insert the upper stage and its payload into an initial low Earth parking orbit, lasted nine minutes and 30.7 seconds.

Following the end of Centaur’s first burn, an event designated Main Engine Cutoff 1 (MECO-1), the mission entered a ten-minute, 26.9-second coast phase. Centaur restarted at the end of this burn to inject SBIRS GEO-4 into geostationary transfer orbit. After a five-minute, 1.8-second burn the flight entered a second coast phase.

Thirteen minutes and thirteen seconds after MECO-2 – the end of the second burn – SBIRS GEO-4 separated to begin its mission. The expected orbit at separation will be 185.2 by 35,851 kilometers (115.1 by 22,277 miles, 100.0 by 19,358 nautical miles) at an inclination of 16.88 degrees. SBIRS GEO-4 will use its own propulsion, including a LEROS-1C apogee motor, to reach its operational geostationary orbit.

The use of an Atlas V 411 for the launch allows Centaur to make a third burn after spacecraft separation, in order to remove itself from orbit. This disposal burn will begin 31 minutes and 45.6 seconds after SBIRS GEO-4 separates, and will last ten seconds. This burn will deorbit Centaur, with reentry expected over the Pacific Ocean, about nine hours and 25 minutes after liftoff.

After making six flights in 2017, up to eight Atlas V launches are scheduled this year, including this mission. These include the first Atlas V launch with a dual-engine Centaur and no payload fairing – the N22 configuration – which will be used to deploy Boeing’s Starliner spacecraft. Other planned launches include NOAA’s GOES-S geostationary weather satellite and NASA’s InSight mission to Mars. Barring any unexpected anomalies, 2018 is also expected to see Atlas become the most reliable rocket in service worldwide – an accolade it already holds by some measures – when its stablemate Delta II is retired in September.

United Launch Alliance began 2018 with the launch of the NROL-47 reconnaissance satellite – now designated USA-281 – atop a Delta IV a week ago. The company’s next launch will be of an Atlas V 541 with GOES-S at the beginning of March.