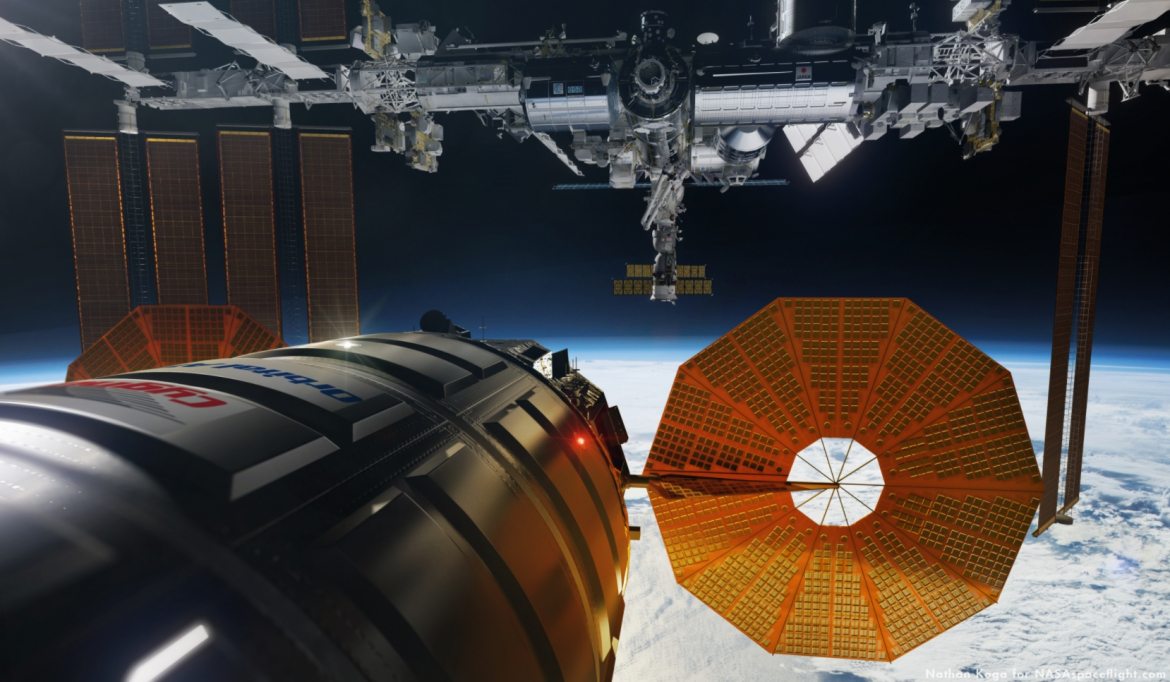 With two flights of Cygnus under their belt for Space Station resupply in 2017, Orbital ATK is once again looking forward to a two Cygnus flight year for 2018.  Additionally, the company is preparing for the first flight of its second Commercial Resupply Services contract with NASA for the International Space Station.  That mission, OA-12, is scheduled to launch in 2019.

For this year, Orbital ATK is planning two resupply missions for the ISS, the OA-9 and OA-10 missions of Cygnus.  Both are scheduled to launch on an Antares 230 rocket from the Wallops Flight Center in Virginia, with launch dates in May and November 2018, respectively.

Frank DeMauro, Vice President and General Manager of the Advanced Programs Division for Orbital ATK Space Systems Group, spoke with NASASpaceflight’s Chris Gebhardt about the progress of the upcoming missions and CRS-2 contract.  Overall, for the OA-9 mission, processing is “going quite well, with the service module finishing up its testing in our facility at Dulles, VA,” noted Mr. DeMauro. 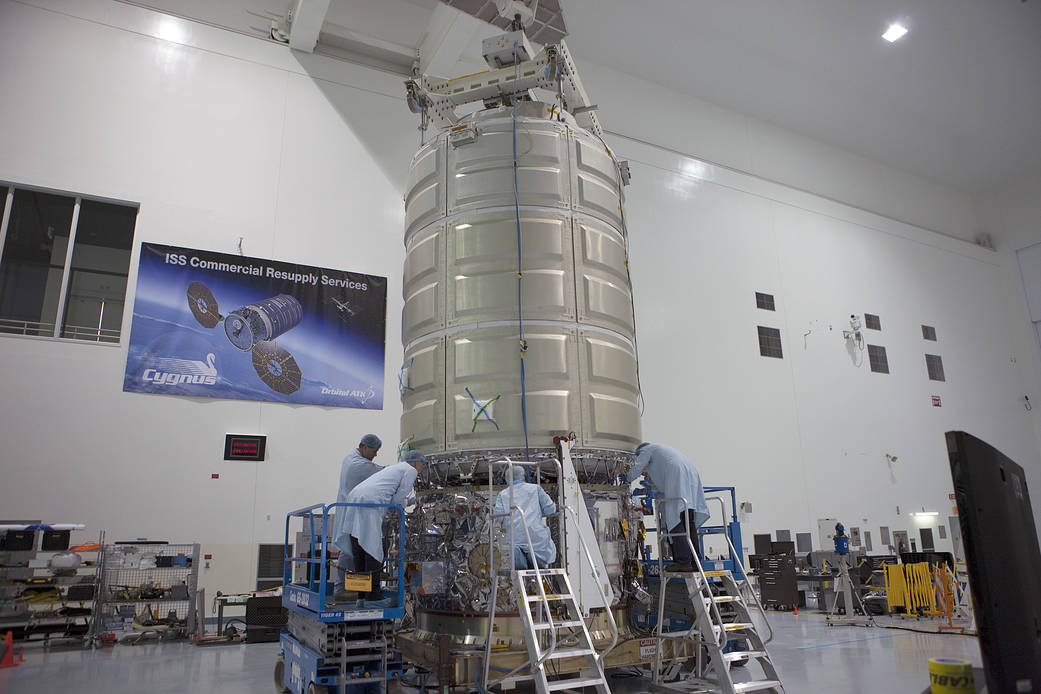 A Cygnus cargo module is mated to its service module ahead of launch. Credit: NASA/Kim Shiflett

“It’s going through its last tests now.  So [at the end of 2017, the service module was] done and ready to go.  The cargo module is already at Wallops, so that’s ready to go for the next mission.  And so we’re looking forward to getting OA-9 off the ground in the early part of this year.”

From a hardware readiness standpoint, OA-9 could be ready to launch in the first quarter of 2018 – though the exact launch date is dictated by NASA and the International Space Station‘s and crew’s schedule.

According to the NASA’s latest Flight Planning Integration Panel document – the long-range master document for all visiting vehicles to and from the International Space Station – the OA-9 mission has a current launch date of No Earlier Than (NET) 1 May 2018, with Cygnus berthing to the Station on 4 May for a 23 day stay at the orbital outpost.

If the current launch date holds, Cygnus would arrive at the Station about two weeks before a Solar Beta Angle Cutout – a period during which the Station’s orbit in relation to the time it spends in daylight creates an energy and heat environment that precludes the ability of vehicles to arrive at or leave the Station.

With an unberth targeted date of 27 May, the current plan appears to be to have the OA-9 Cygnus present at the Station through the Solar Beta Angle Cutout, which extends from 17 to 26 May.

OA-9 is currently planned as another short duration stay of Cygnus at the Space Station before departing the orbital outpost.

But OA-9 is not the only Cygnus mission planned for this year, with OA-10 slated to follow in the November time frame.

“Right now, we’re planning on two [Cygnus missions this year],” stated Mr. DeMauro.  “The schedule for OA-10 will depend on NASA’s needs, but as far as the hardware goes, the service module is well on its way in its testing program.

“The cargo module is in a similar state at Thales Alenia Space in Torino, Italy.”

According to the current Flight Planning Integration Panel document (available for download on L2), OA-10 is slated to launch on 8 November 2018, followed by a berthing of Cygnus to the Station on 11 November to begin a 60 day stay at the orbital outpost that will culminate in an unberthing on 10 January 2019. 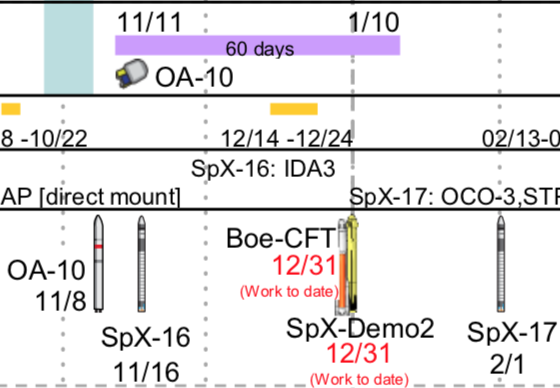 Completion of the OA-10 mission will leave just one remaining flight under the current CRS-1 (Commercial Resupply Services -1) contract between NASA and Orbital ATK.  After the OA-11 mission in early 2019, the CRS-2 contract will begin with OA-12.

“CRS-2 is moving along very well.  We’ve gotten the vehicle through – not only the vehicle, the whole system – through its Critical Design Review phase.  And that was a successful design review,” noted Mr. DeMauro.  “We are actively building the first spacecraft of CRS-2, and we have hardware on order for multiple vehicles.

“So that’s moving along very well.  Of course on CRS-2 we’ll be offering NASA more capability in terms of cargo, lift, and more science capability.  And all that work is on track and ready to support the first CRS-2 mission in the 2019 timeframe.”

This different capability in terms of cargo and lift capacity stems from a clause in the CRS-2 contract for Orbital ATK that NASA can decide which rocket – Antares or Atlas V – and which version of Cygnus (a bigger version that can launch on Atlas V) is used for each mission.

“When NASA turns on any particular mission, they choose the version that they want.  In the case of OA-12, they selected an Antares mission.  So OA-12 will be on an Antares out of Wallops,” stated Mr. DeMauro.

Overall, Mr. DeMauro said that Orbital ATK’s general approach to the CRS-2 contract is to use a baseline assumption that all missions will fly on Antares.  “The way we’ve approached CRS-2 is that we’ll actually be flying all the missions on Antares.

“That’s not to say that NASA’s made that decision.  If NASA comes back and says ‘no, we’d like the mission on an Atlas,’ we’ll be responsive to our customer’s needs, but we’ve baselined the Antares on all of our CRS-2 missions.”

In general, NASA usually activates a mission in the CRS contracts 24 months (2 years) prior to a mission’s opening target launch date.  This amount of lead time gives Orbital ATK – and potentially United Launch Alliance – enough time to adequately plan for and build the appropriate spacecraft for the right vehicle for each of the CRS-2 missions that will fly.

Atlas V flies through DCR ahead of Starliner debut