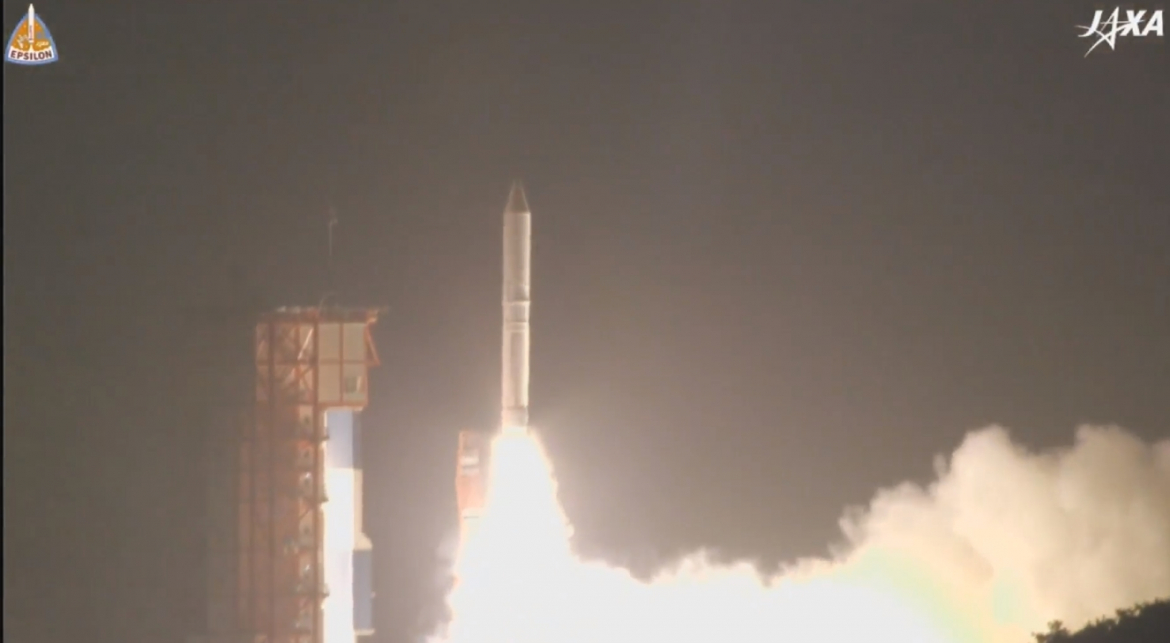 Japan’s experimental radar imaging satellite ASNARO-2 was launched Thursday aboard the third flight of the Epsilon rocket. Liftoff – from the Uchinoura Space Centre – occurred at the opening of a twenty-four-minute, two-second window opening at 06:06:11 local time (21:06 UTC on Wednesday).

Japan’s first launch of 2018, Wednesday’s mission was originally scheduled towards the end of last year, before an electrical issue with the rocket delayed its liftoff. Epsilon was tasked with deploying the ASNARO-2 satellite into a sun-synchronous low Earth orbit.

Advanced Satellite with New System Architecture for Observation 2 – or ASNARO-2 – is the second in a series of experimental Earth imaging satellites operated by Japan Space Systems, formerly the Institute for Unmanned Space Experiment Free Flyer (USEF).

A radar imaging mission, it follows the ASNARO-1 optical satellite that launched aboard Russia’s Dnepr rocket in November 2014. The mission is funded by Japan’s Ministry of Economy, Trade and Industry through its New Energy and Industrial Technology Development Organisation (NEDO). 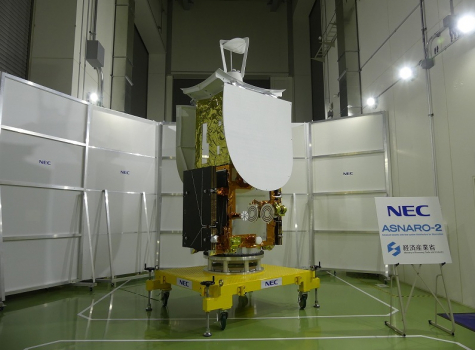 Two deployable solar arrays will generate electrical power for the satellite. At the end of the spacecraft’s five-year design life, these are still expected to be generating at least 1,300 watts of power.

ASNARO-2 will be operated in a near-circular sun-synchronous orbit, at an altitude of 505 kilometers (314 miles, 273 nautical miles) and an inclination of 97.4 degrees. It will orbit the Earth about once every 95 minutes.

The spacecraft carries XSAR, a synthetic aperture radar (SAR) payload operating in the X band. This can be operated in three different observation modes: spotlight, strip mapping and scanning.

The spotlight mode, where the instrument focusses on a small area of the Earth’s surface, offers the highest resolution – one meter (3 feet) or better – with a swath width of 10 kilometers (6.2 miles, 5.4 nautical miles). In strip mapping mode, the satellite can image a longer strip of the Earth’s surface in the direction of travel.

Japan’s Epsilon rocket will undertake the ASNARO-2 launch. Epsilon, which made its debut in September 2013 with the Hisaki – formerly SPRINT-A – satellite. In its standard configuration, Epsilon is a three-stage all-solid rocket, however it can also fly with an optional liquid-fuelled fourth stage. Thursday’s launch – designated Epsilon-3 – will use this four-stage configuration. 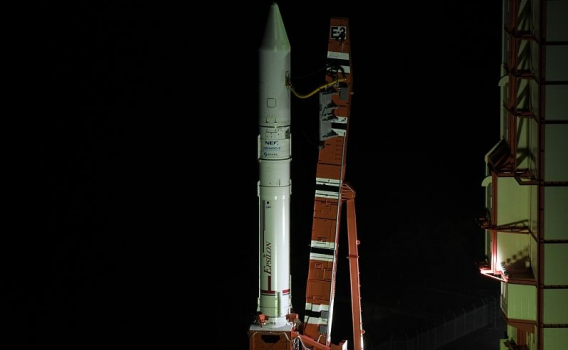 JAXA developed Epsilon to provide Japan a rocket capable of placing small satellites into orbit. It draws heavily on pre-existing components, with its first stage based on the SRB-A3 boosters used by the larger H-IIA rocket, and its upper stages derived from the older M-V vehicle. M-V, which Epsilon replaced, was retired in 2006 as its high cost-to-payload ratio made it uneconomical to operate.

During the gap between the M-V’s retirement and Epsilon’s introduction, JAXA relied on foreign rockets such as Dnepr to launch its small satellites.

The Epsilon launches from the same launch complex at the Uchinoura Space Centre that was used by the M-V – and earlier members of the Mu family of rockets. The Uchinoura Space Centre is one of Japan’s two operational orbital launch sites. The facility was originally used by Japan’s Institute for Space and Astronautical Science, or ISAS, one of three Japanese space agencies that merged in 2003 to form JAXA.

Before the merger, ISAS operated Japan’s smaller rockets – Mu, Lambda and the country’s sounding rockets – while the National Space Development Agency (NASDA) flew larger liquid-fuelled rockets from the Tanegashima Space Centre. While operated by ISAS, what is now Uchinoura was named the Kagoshima Space Centre.

The Mu rockets were rail-launched, so Uchinoura’s Mu Centre launch complex was originally designed as a rail launcher. Now that the complex is used by the vertically-launched Epsilon, it has been modified and the former launch rail now serves as an umbilical tower.

Although it is Epsilon’s third flight, Thursday’s launch was the first to combine both the operational version of the rocket and the CLPS upper stage. The operational form of Epsilon, described by JAXA as “Enhanced Epsilon” at the time of its last launch – although this name seems to have been dropped – incorporates enhanced second and third stages over the original design that flew the vehicle’s maiden flight. The second Epsilon used this “Enhanced” configuration, which is now the standard for all launches, while the CLPS was used on the first Epsilon launch.

Thursday’s launch began with ignition of Epsilon’s SRB-A3 first stage at the zero mark in the countdown. Epsilon lifted off and climbed quickly away from Uchinoura. The SRB-A3 burned for 108 seconds, propelling the rocket to a speed of 2.3 kilometers per second (1.4 miles per second). Following first stage burnout, the mission entered a brief coast phase as the vehicle continues to ascend.

Two minutes and 31 seconds into the flight, Epsilon was in space at an altitude of about 123 kilometers (76 miles, 66 nautical miles). The payload fairing, which will have protected ASNARO-2 during its ascent through the atmosphere, was no longer be needed and was jettisoned to save weight. Ten seconds later, the spent first stage separated.

The third stage burn lasted 88 seconds. Separation occurred one minute and 52 seconds after burnout, with the fourth stage – the Compact Liquid Propulsion System (CLPS) – igniting after another four minutes and 37 seconds. CLPS uses hydrazine propellant. It made two burns during Thursday’s launch, with the first lasting five minutes and 16 seconds.

Once the upper stage’s first burn has concluded, the vehicle coasted for 23 minutes and 17 seconds before the second burn began. This was a seven-minute, seven-second firing of the CLPS to place ASNARO-2 close to its operational orbit.

Spacecraft separation occurred two minutes and 24 seconds after the end of the second burn, at 52 minutes, 35 seconds mission elapsed time. At separation, Epsilon was at an altitude of 513 kilometers (319 miles, 277 nautical miles).

Thursday’s launch was Japan’s first of 2018. In 2017 the country made seven orbital launches – the most it has achieved in a calendar year. Japan’s next scheduled launch is expected to be a reflight of last January’s attempt to place a CubeSat into orbit using a modified SS-520 sounding rocket. This launch was delayed from December, and is awaiting confirmation of a new launch date once Epsilon lifts off.

After the SS-520 launch, Japan’s next mission will then be an H-IIA flight at the end of February, which is expected to deploy an IGS optical reconnaissance satellite. Thursday’s launch will be Epsilon’s only flight in 2018 – its next launch is currently scheduled for the first quarter of 2019 with the Innovative Technology Demonstration Satellite.