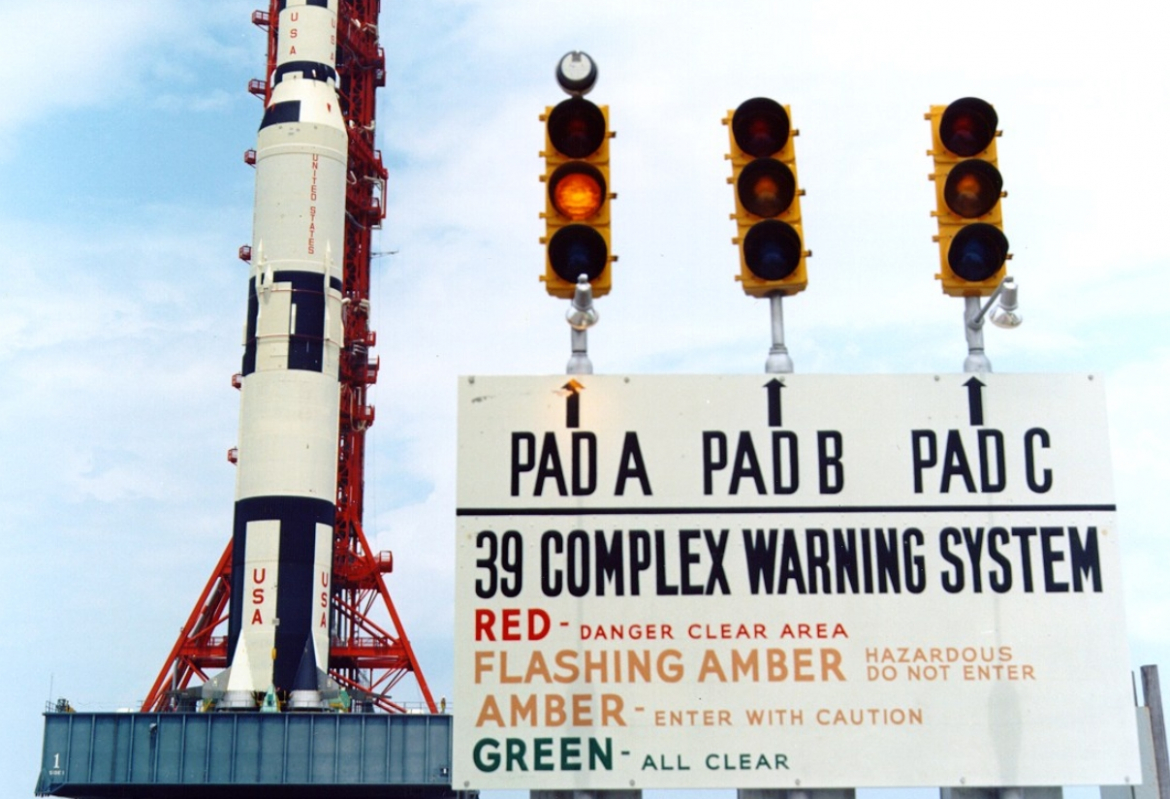 As Kennedy Space Center continues its transition to becoming a multi-user spaceport, more details are emerging about its possible future, including a new small vehicle launch complex, a New Armstrong launch pad, and a SpaceX BFR assembly facility. SpaceX, meanwhile, has also been making slow but steady progress at the location of their future South Texas Launch Site.

Kennedy Space Center was built in the early 1960s for launching the Saturn V rocket for the Apollo program. Originally, three identical launch pads were planned to be built: 39A, 39B and 39C.

Two more launch pads of the same design, 39D and 39E, were also planned to be built later, when the Saturn V, and potentially the much more powerful Nova rocket (which never flew), were expected to be launching more often. 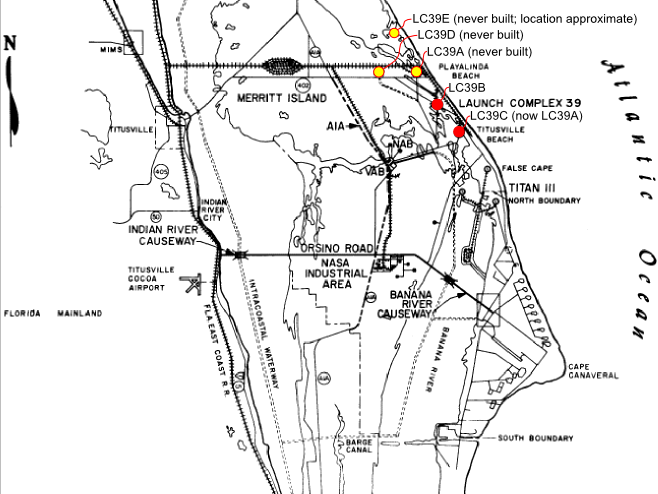 However, due to budget and schedule restrictions, only 39A and 39B were built. 39C was planned to be added later if needed, and engineers even left an open end to the crawlerway near 39B for possible future expansion.

The opening to the extension road, which forks from the turn into 39B, is still visible today via aerial photos

During the Saturn V program, Pad 39A launched 12 Saturn V rockets, including Apollo 11 and Skylab 1, while 39B – which was intended to be a backup, not primary, pad – launched only one, Apollo 10. Pad 39B later hosted four Saturn IB launches, three of which transported crews to the Skylab space station and one that launched the Apollo CSM portion of the joint American-Soviet Apollo-Soyuz Test Project. That launch was the end of both the Saturn and Apollo programs.

After the final Saturn launches, 39A and 39B were then modified for use by the Space Shuttles. The main differences to the pads were the addition of a Fixed Service Structure – made from the Saturn V mobile launcher towers – and a Rotating Service Structure – which was used for integrating payloads into the Shuttle on the pad. Pad 39A hosted the inaugural Shuttle launch, STS-1, in 1981.

Pad 39B began hosting Shuttle launches in 1986, debuting with the tragic STS-51L Challenger launch, and coincidentally hosted all three Return To Flight missions after Challenger and Columbia. The pad hosted its last Shuttle launch in December 2006, after which some modifications began for the then-Constellation Program.

Those Constellation-era modifications could not begin in earnest until 2009, when Pad-B hosted its last Space Shuttle, Endeavour, in April/May of that year as Endeavour served as the STS-400 rescue vehicle for Atlantis’ final mission to the Hubble Space Telescope.

Pad 39A hosted the last launch of the Shuttle program on July 8, 2011, and hosted no launches from then until 2017. 39A was leased by SpaceX in 2014 for Falcon 9, Falcon Heavy and Crew Dragon launches, and it returned to service with launches of the Falcon 9 rocket starting in early 2017.

With more than 5 million pounds of thrust at liftoff—equal to approximately eighteen 747 aircraft at full power—Falcon Heavy will be the most powerful operational rocket in the world by a factor of two.

Pad 39B is still owned by NASA and will be used to launch their future Space Launch System rocket and potentially Orbital ATK’s Next Generation Launcher (NGL).

In 2015, Pad 39C was constructed at Kennedy Space Center. However, it is much different than the originally planned Pad 39C.

The new 39C was built within the perimeter of Pad 39B and is intended for use by small-lift launchers, such as Rocket Lab’s Electron launcher. However, Pad 39C will not be used until after the first SLS flight, Exploration Mission 1, set to launch in 2019 or 2020.

Construction of LC-39C is part of Kennedy Space Center’s commitment to becoming a multi-user spaceport in the post-Shuttle era. 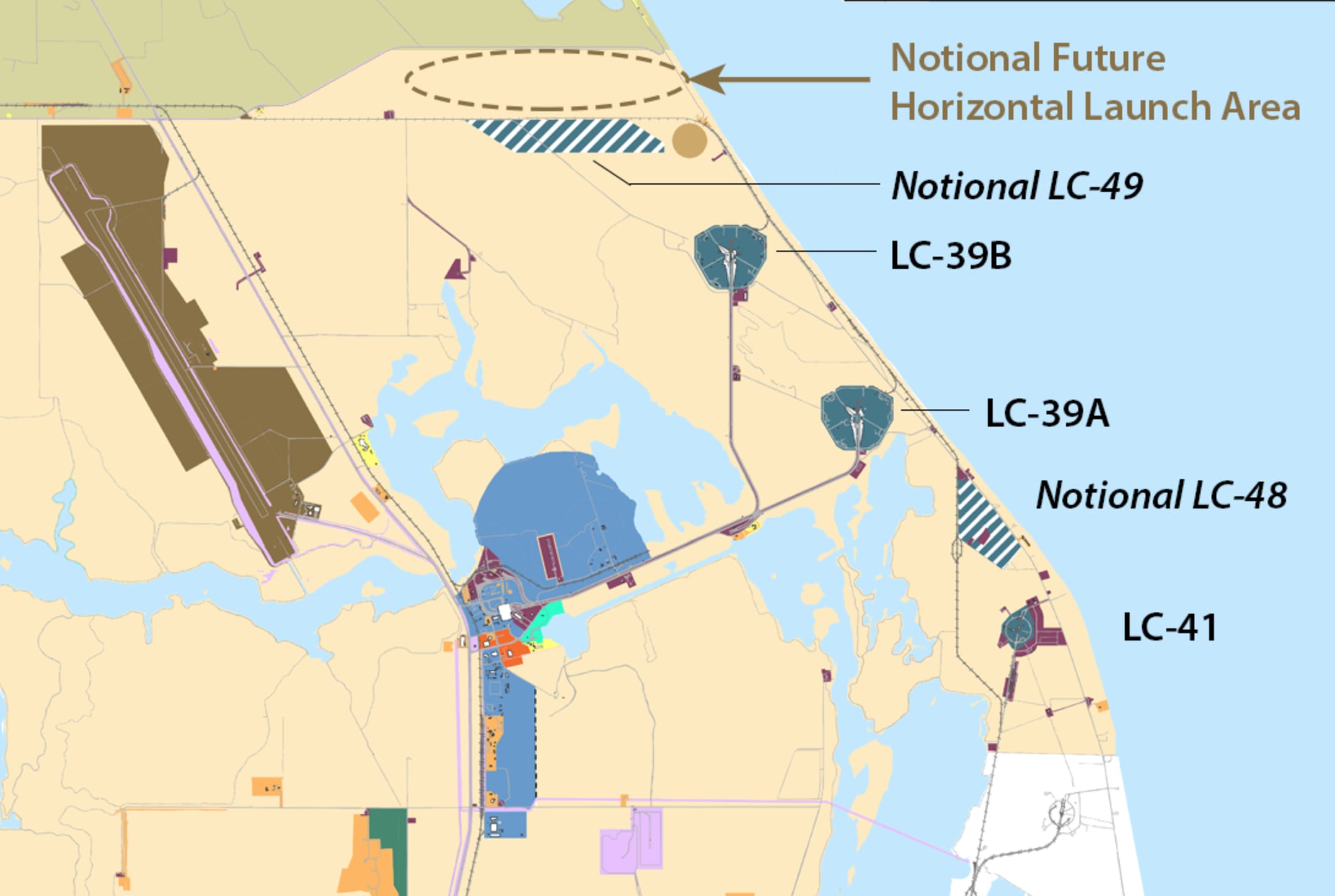 In order to become a multi-user spaceport, KSC must be ready to support a wide variety of rockets and have appropriate launch facilities for those vehicles. This can involve leasing existing facilities to companies, such as Pad 39A being leased to SpaceX. However, the needs of specific rockets could warrant the construction of a new launch pad, or even a new launch complex, containing multiple launch pads.

Blue Origin is currently talking with NASA about constructing a new, large launch facility for their New Armstrong rocket north of 39B, where the original Pad 39C would have been located. This new facility, if built, would be named Launch Complex 49. The Environmental Impact Study for the planned launch site is currently underway. 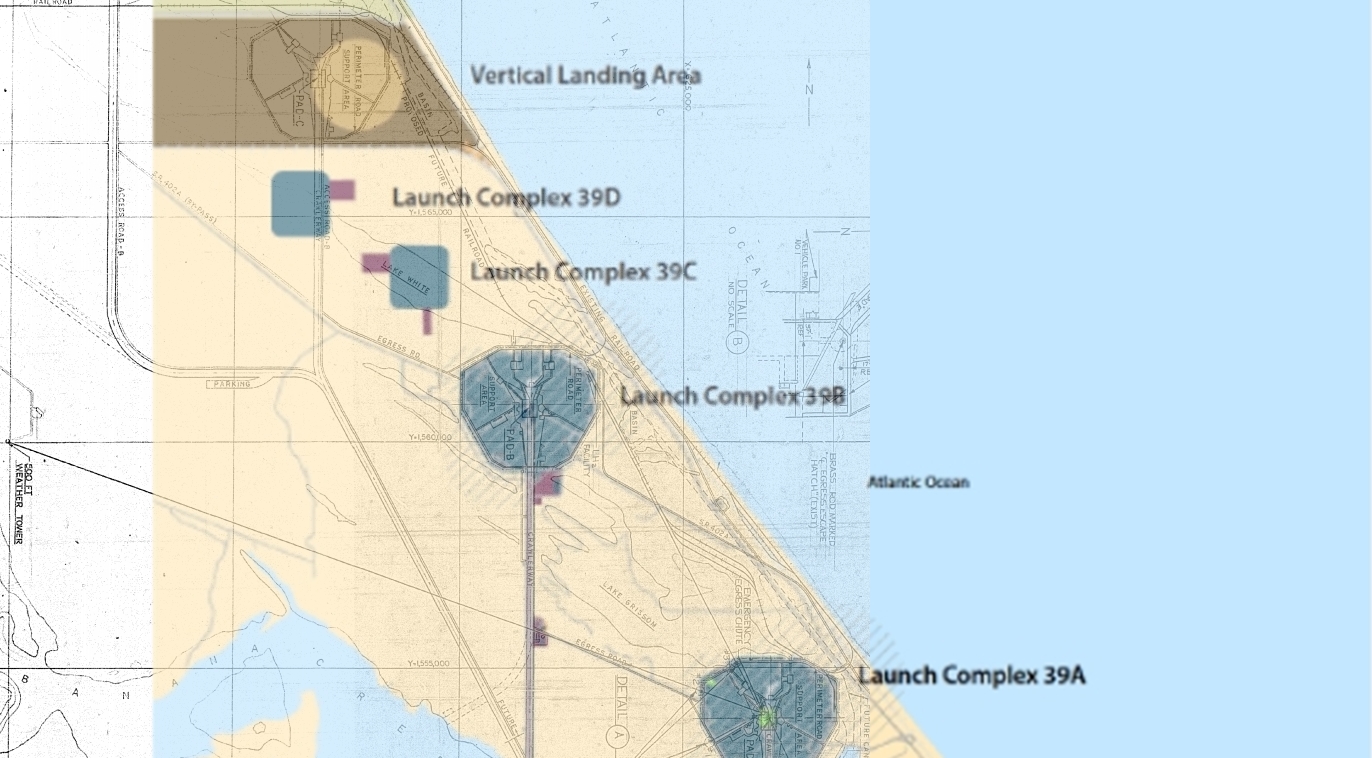 Since LC-39C won’t be used until after the first SLS launch, KSC is also designing a new dedicated light-lift vehicle launch complex, named LC-48. This new launch site will feature two pads and will be used by small launchers, such as the Electron rocket. LC-48 will be located between LC-39A and SLC-41, but on KSC property.

SpaceX is also considering building their own new facilities, although this will not be a launch complex but rather a factory to build their future BFR vehicle. The company is talking with NASA and Space Florida about obtaining land for the new factory, likely be located near or right next to Blue Origin’s existing New Glenn factory.

Such work would take place after the completion of the company’s future South Texas Launch Site. Progress on the Brownsville site has seen the construction of a large solar farm, the addition of communication dishes for tracking and communicating with future Crew Dragon missions and bringing in construction equipment for building the launch site.

In 2011, SpaceX began talks with various state and local officials, exploring proposals for a new and private launch site located away from their current facilities – SLC-40 at the Cape and SLC-4E at Vandenberg. With their launch cadence and manifest rapidly growing, SpaceX predicted that their current launch pads at the time would be overwhelmed with the number of launches.

From 2012 to 2014, SpaceX began exploring submitted proposals for the new launch site. The primary considered locations in “competition” to host the site were in Alaska, California, Florida, Texas, Virginia, Georgia and Puerto Rico. The proposed Texas site, located near the town of Brownsville, was the leader in the “competition”.

SpaceX began buying and leasing land at the proposed Brownsville site in 2012 and started investigating the environmental impact of launches from the site in the same year, which concluded in late 2013. 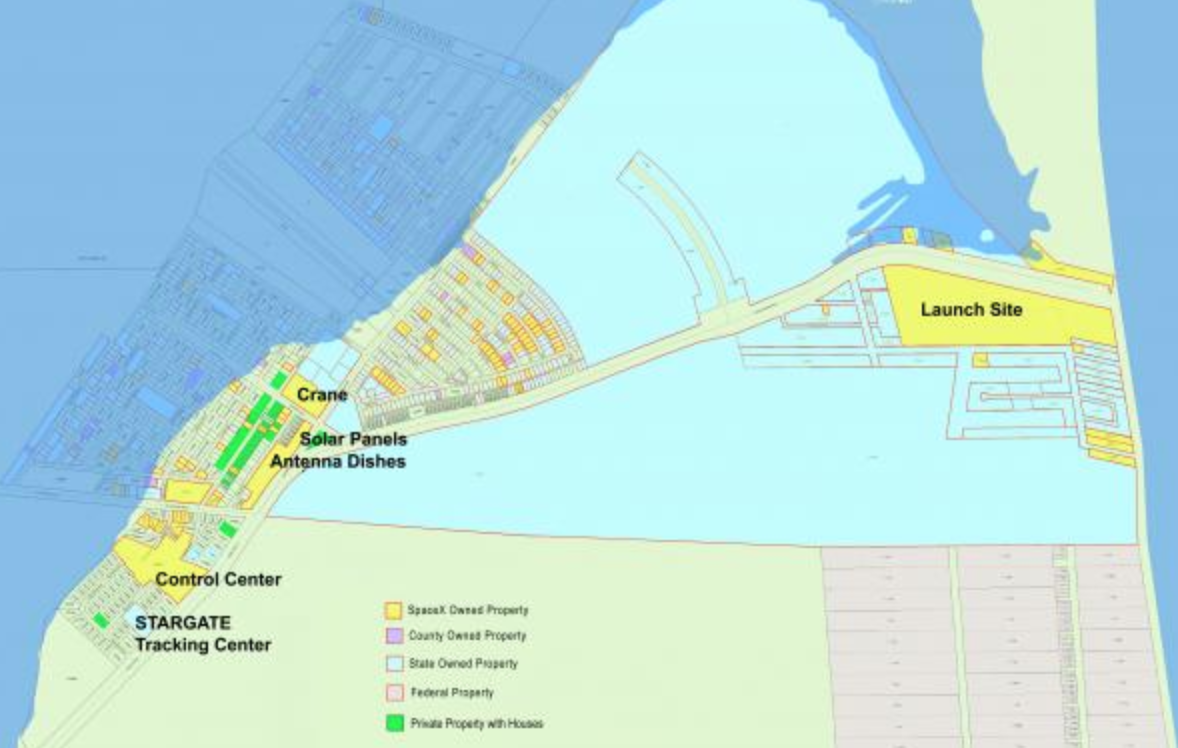 SpaceX announced in August 2014 that the proposed Brownsville location would host their new, private launch site.

Groundbreaking occurred in 2014, but construction came to a near halt when construction resources were moved to work on the then newly-acquired LC-39A at Kennedy Space Center to ready it for Falcon Heavy and crewed Falcon 9 missions.

Soil foundation issues at the Brownsville site and the need to repair SLC-40 following the AMOS-6 conflagration in September 2016 delayed construction even further, and only in late 2016 has construction at the site began to slowly resume.

Due to the aforementioned soil foundation issues, a large dirt mound was built up in early 2016 on the future Horizontal Integration Facility (HIF) site to help settle and pack down the loose soil to ensure a firm foundation for the facility. In late 2016 and early 2017, two tracking dishes, moved to Texas from Cape Canaveral, were installed near the site for tracking future Crew Dragon missions. 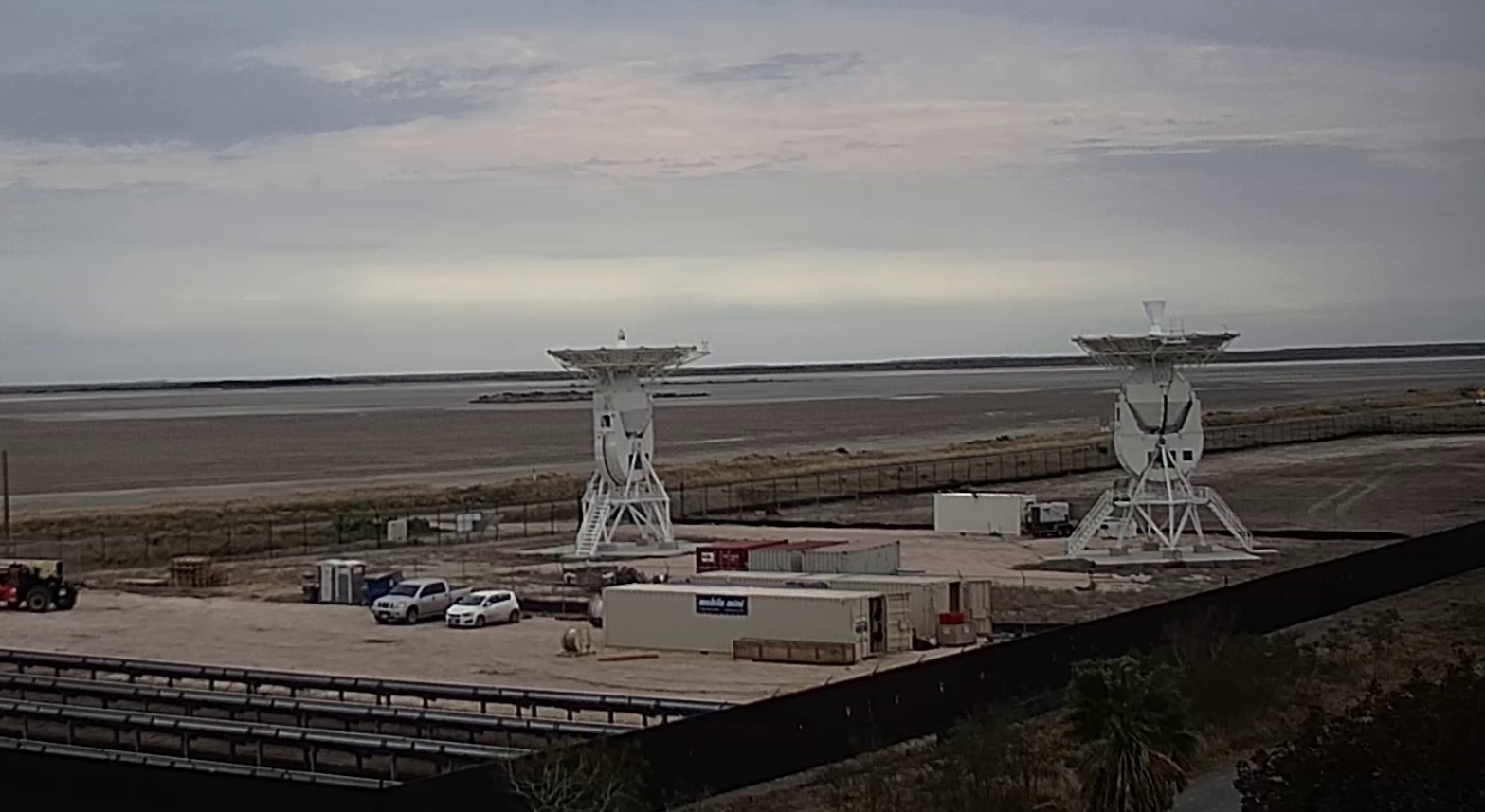 Starting in late 2017, construction equipment was moved to the site in preparation for major construction, which should start in 2018. The main structures will be the HIF, a payload processing and encapsulation facility, a launch control center, and the launch pad with its hardware (such as lightning towers, fuel tanks, sound suppression water storage tanks, etc.).

The current plan for the site is to support both Falcon 9 and Falcon Heavy commercial missions, mostly heading to Geostationary Transfer Orbit (GTO), although launches to Low Earth Orbit (LEO) are possible. However, recent updates by SpaceX president Gwynne Shotwell seem to hint at the possibility of the site hosting future BFR tests and/or launches.

SpaceX is currently limited to no more than 12 Falcon launches per year from the site, and up to two of those can be Falcon Heavy launches.

As of now, the launch site is expected to be finished in late 2018 or early 2019, according to Ms. Shotwell, with “vehicle tests” occurring at around the same time. However, with no major construction on the launch site itself occurring as of now, only time will tell if SpaceX can achieve those goals.