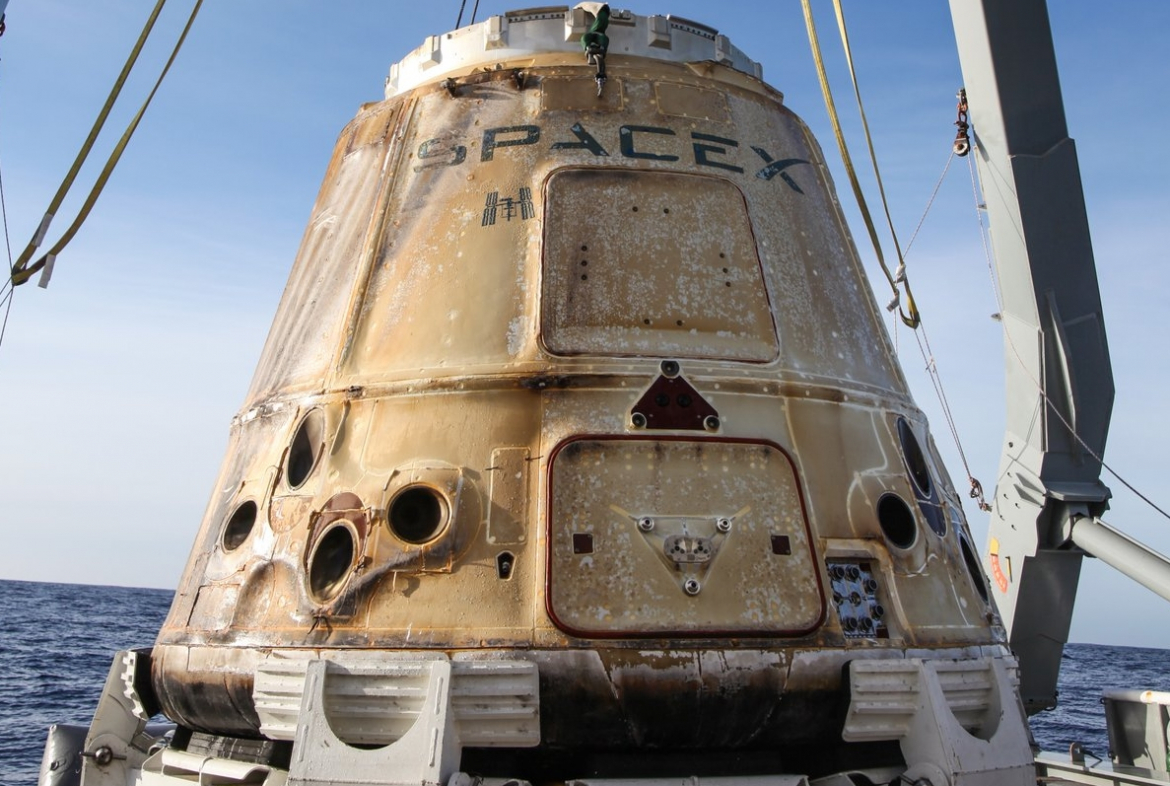 SpaceX’s CRS-13 Dragon unberthed from the ISS ahead of a return to a Pacific Ocean splashdown on Saturday, concluding the spacecraft’s latest resupply mission. Dragon returned with 4,100 pounds of cargo, highlighting her unique downmass capability for NASA. Splashdown occurred around 10:36 Eastern Time (07:36 local time on the West Coast).

Dragon has enjoyed yet another successful trip into space.

Launched by Falcon 9 (B1035.2) from a returning SLC-40 at Cape Canaveral, Dragon has enjoyed an issue-free orbital trip to the ISS.

Following a smooth rendezvous with the International Space Station, she was berthed to Node-2 Harmony’s nadir port.

Of the science payloads launched to Station, two were external experiments in the trunk of the Dragon, namely the Total and Spectral Solar Irradiance Sensor (TSIS-1) and the Space Debris Sensor.

Both payloads were successfully removed during Dragon’s berthed operations, while the ISS crew removed the multitude of payloads from her pressurized module, before re-filling it with downmass.

Over recent days, the SSRMS moved into operations to prepare for the departure of Dragon.

The ISS crew also checked out the vital communication system that will be employed during the departure of Dragon, such as the Commercial “Off-The-Shelf (COTS) Ultra High Frequency (UHF) Communication Unit (CUCU) and Crew Command Panel (CCP)

Friday night marked the unberthing of the vehicle from Node 2.

Flight controllers @NASA_Johnson & @csa_asc just unberthed the @SpaceX Dragon from @Space_Station You can see #Canadarm2 move the Dragon away in this timelapse. Nice and gently. Next they will move to the overnight park position. #gospacerobots pic.twitter.com/kiUdFH7y0V

Whilst being firmly held in the snares of the Latching End Effector (LEE) on the end of the SSRMS, bolts securely fastening Dragon to the nadir (Earth-facing) Common Berthing Mechanism of Node-2 Harmony were driven to the retract position, freeing Dragon from its berthing port on the Station.

Dragon was then maneuvered on the end of the SSRMS away from the main structure of the ISS to its release point 10 meters from the orbital lab.

For this release, the Dragon will depart via ground controls, with  Expedition 54 Flight Engineers Joe Acaba and Scott Tingle monitoring, as opposed to conducting the operation themselves.

The exact time of release is always subject to change from the announced plan due to lighting conditions, communications coverage, and day-of timeline activities. CRS-13’s release was marked as at 3:58 AM Eastern. 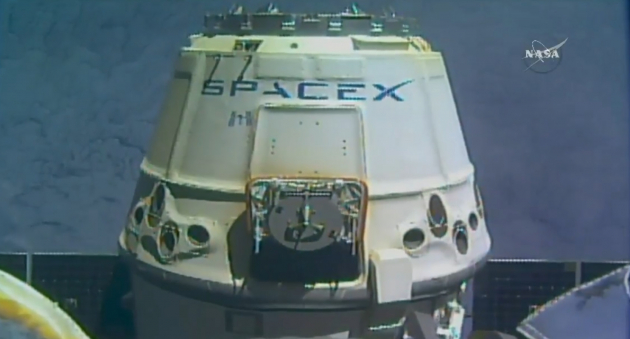 Once the LEE snares were released, the SSRMS backed away from Dragon as the craft held its position at the 10m mark.

Once the Station’s arm is cleared to a safe distance, Dragon conducted a series of three small thruster firing departure burns that move the capsule down the R-Bar (Radial Vector) and away from the International Space Station toward Earth (when viewed in relation to ISS orientation and Dragon movements with respect to Earth).

As Dragon pushes down the R-Bar, the largest of the three thruster departure burns imparted enough Delta Velocity (Delta-V) change to Dragon to push it outside of the approach ellipsoid.

At the appropriate time, Dragon’s Draco thrusters began a 10-minute firing sequence known as the deorbit burn to slow the capsule and place it on to the proper heading for entry into Earth’s atmosphere.

Dragon then places its heat shield out in front in preparation for Entry Interface (EI) – the moment Dragon reached the first traces of Earth’s upper atmosphere.

Fast recovery vessels deployed to begin collecting Dragon’s parachutes as recovery of the capsule itself was conducted by the primary recovery assets.

NRC Quest has left the Port of LA and is heading out into the Pacific Ocean. The ship is preparing to recover the #SpaceX #CRS13 #Dragon capsule tomorrow morning. pic.twitter.com/FcbS0JBh3X

Now safely aboard the recovery vessel, Dragon is being transported to the Port of Los Angeles and will then ship to Texas for cargo removal.

The Dragon involved with CRS-13 spacecraft now has two missions under her belt, as she was previously flown in 2015 for the CRS-6 mission.

Launched on 14 April 2015 atop a Falcon 9 v1.1 rocket, Dragon spent almost 37 days in orbit – 34 of those berthed at the space station – before returning to Earth on 21 May for a successful water recovery off the coast of California.

C108 is the second Dragon to be reflown – capsule C106 was used for 2014’s CRS-4 mission before returning to space as CRS-11 earlier this year, atop the same first stage that will be used to launch CRS-13.

Currently, Dragon is the only resupply vessel capable of returning experiments and equipment from the International Space Station as the three other in-service resupply vehicles (Progress, Cygnus, and the H-II Transfer Vehicle) all perform destructive reentries into Earth’s atmosphere.

Under the second Commercial Resupply Services (CRS2) contract award, Sierra Nevada’s Dream Chaser spaceplane will join Dragon as only the second uncrewed vehicle capable of returning equipment and experiments from the Station.

With the conclusion of CRS-12, NASA’s next commercial resupply mission to the International Space Station will be SpaceX’s CRS-14 flight, which is currently targeting liftoff from SLC-40 at Cape Canaveral in mid-March.