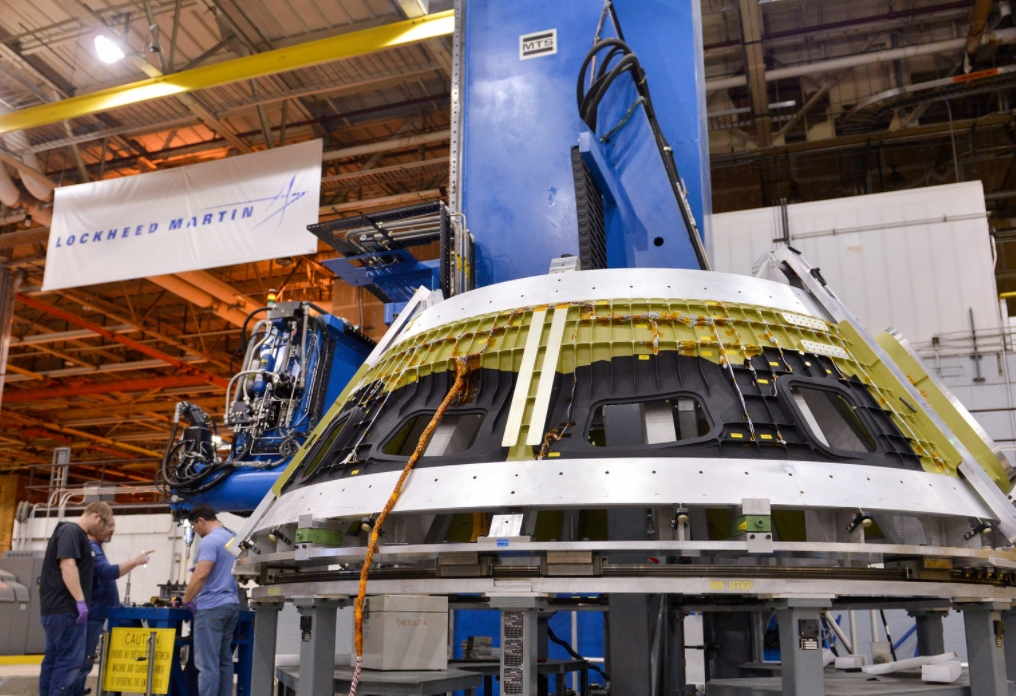 Construction of the living and working area for the first crewed Orion spacecraft is well underway at the Michoud Assembly Facility (MAF) in New Orleans.  Building on lessons learned from previous construction, Orion prime contractor Lockheed Martin has already completed four of the seven welds necessary to assemble the crew module pressure vessel.

Current schedules call for the completed pressure vessel to be shipped in September to the Kennedy Space Center (KSC) in Florida, where it will be outfitted to fly on Exploration Mission-2 (EM-2).

“We’ve done the PV1 weld — that’s the tunnel to the forward bulkhead — [and] we just completed the three cone welds,” Blaine Brown, Orion Crew Module Engineering Manager for Lockheed Martin, said in an interview with NASASpaceflight.com.  “[The] next one that we’ll do is the aft bulkhead to the barrel.”

At the time of the interview on February 7, Brown also noted that the aft bulkhead was the last piece to arrive at MAF: “The bulkhead is in the process of being transported to Michoud today, actually, and the barrel is already at Michoud.” 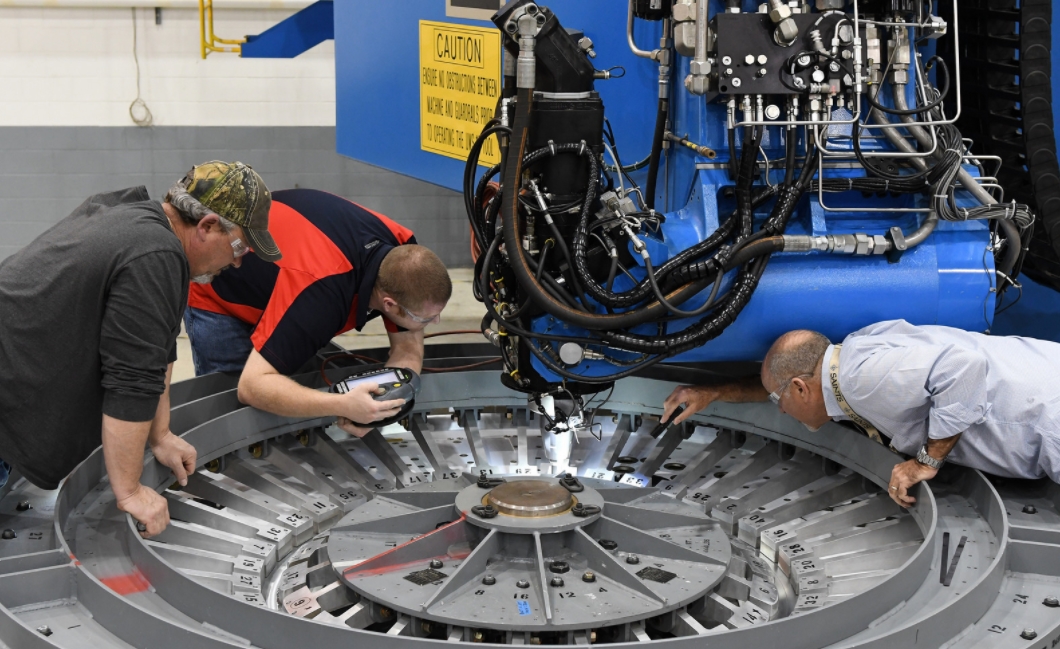 EM-2 will be the first Orion mission to fly with crew, with its mission currently scheduled for no earlier than 2023.

“It’s really historical, not just from a technology standpoint,” Paul Anderson, director of Orion EM-2 production at Lockheed Martin said.  “It is the future vehicle of NASA to do space exploration, but this specific EM-2 mission will take humans further than any time in history.”  The EM-2 mission is currently planned to be a circumlunar flight.

The pressure vessel is the structural core of the crew module.  Other elements such as systems for thermal protection (the heatshield), propulsion (attitude control), and landing and recovery (parachutes and flotation) attach to the outside of the pressure vessel, in addition to other primary and secondary structures.

It is also the crew cabin — the living and working area for the astronauts on the mission.  Most of the time, a sea-level atmosphere in the pressure vessel will be maintained for the crew.  Inside the pressure vessel are areas for crew systems such as flight controls, communication and information systems, seating, storage for food, clothes, and equipment, a galley, and a toilet. 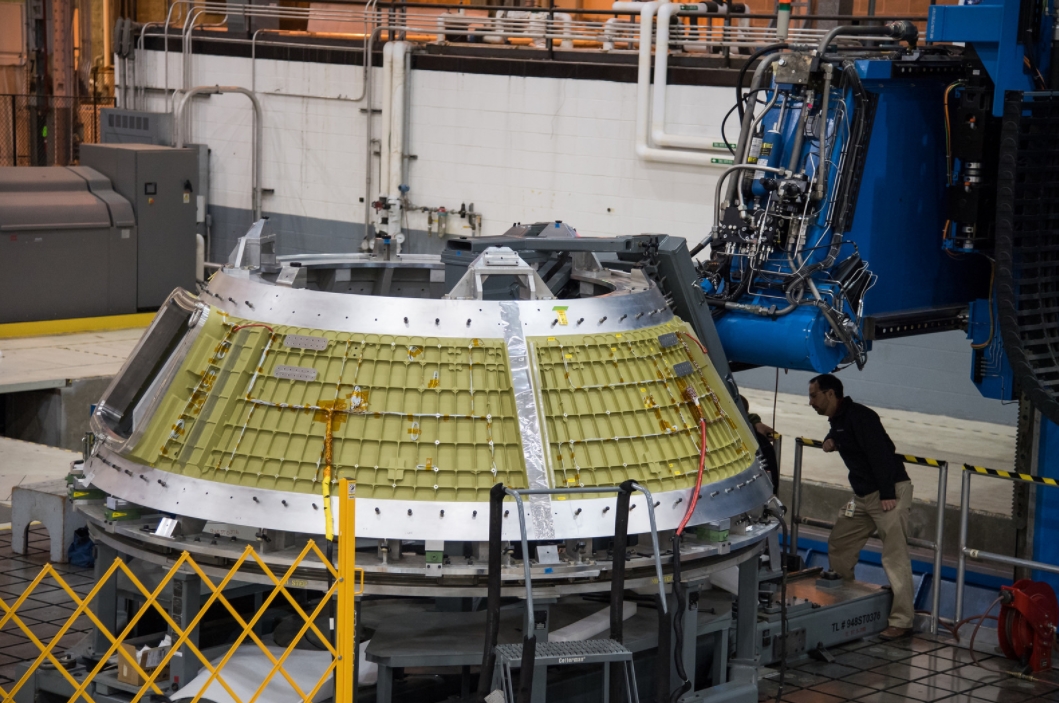 Once those welds are complete, the pieces will almost be ready for the final weld.  “The final weld is the closeout weld, where we weld the cone to the barrel,” Brown said.

Before that final weld, the other major structural component has to be added to the aft bulkhead, called the backbone assembly.  “It’s a structural reinforcement, as well as providing basically areas where we can then put the crew equipment, stowage, all that kind of stuff,” he explained.

“We’ve got running crossbeams through there, and it also serves as a partition.  That’s where our lockers go and it’s also where you’ve got the area where the toilet is and also the galley for the crew.”

The backbone assembly is a bolted structure consisting of nine pieces that are assembled prior to being installed inside the pressure vessel.  “We actually have a very nice tool that we can build that whole backbone up, separately, get it all in alignment, get it all precise, and then it fits right into the barrel/aft bulkhead area,” Brown noted.

The backbone is also bolted into the welded aft bulkhead/barrel assembly. 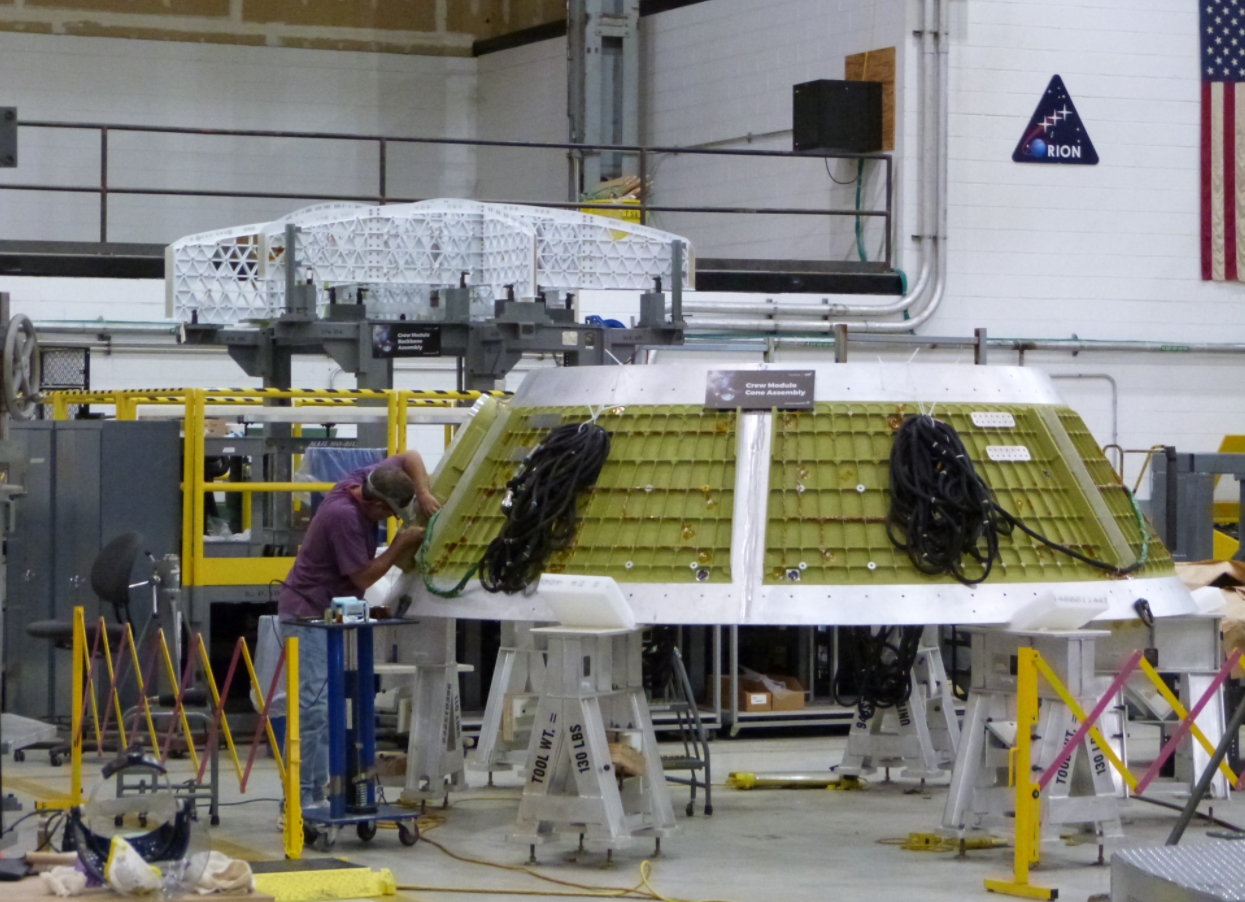 Backbone of Orion (background) near the CM. Photo by Philip Sloss for NSF.

The EM-2 pressure vessel is the fifth structure to be constructed at MAF.  The first two Ground Test Article (GTA) and Exploration Flight Test-1 (EFT-1) structures were pathfinders for the program in terms of production, processing and handling, and flight.

The lessons learned have also led to improvements being fed back into manufacturing, assembly, and production.

“We’ve really been through this multiple times already,” Brown noted.  “The EM-1 and structural test article (STA) [pressure vessels] have been basically following the same process, so we’ve really wrung this [process] out and applied lessons learned in doing this.”

“It had taken three weeks to a month to get through these welds like on the cone [panels],” he explained.  “Originally even longer, because we were [new to] getting the alignments [correct] and here it was like a week and a half to get through the three of them.  As you would expect, you learn on each of the builds and we’ve done it many times now.” 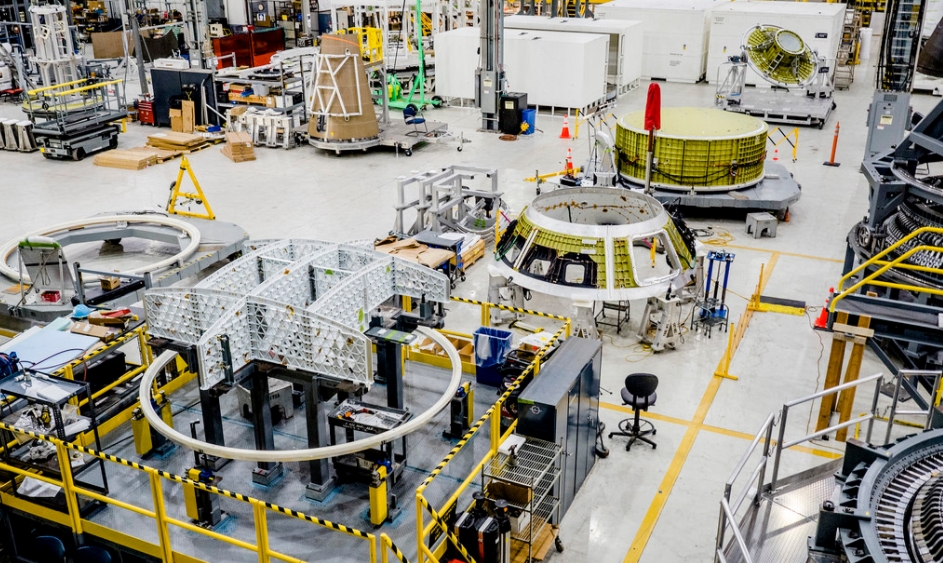 “The entire MAF operation [has] gone extraordinarily well,” Anderson added.  “Whether it was on the STA, EFT-1, [or] EM-1, every time we do this we apply whatever lessons learned to tooling, whether it’s tolerances to manufacturing.  All of this we have started to see pay dividends.”

“We have really seen improvements [in] how well these things have gone together,” Anderson continued.  “The supplier performance of the seven major elements, whether it was Ingersoll or AMRO, has been I would say significantly better.  Just because they’ve learned as well, there are all these similar operations within their factories.”

Each of the pressure vessel welds has its own tool where the parts are welded.  “There is specialized tooling for each one of these [welds] that we custom fabricate,” Brown explained.

“The actual weld head itself [is] basically the same, but we have different tooling to basically line up each of the different parts to get the weld interfaces in exactly the right alignment and hold them into place while we go do the weld sequence.”  Self-reacting friction stir welding is used for each of the welds. 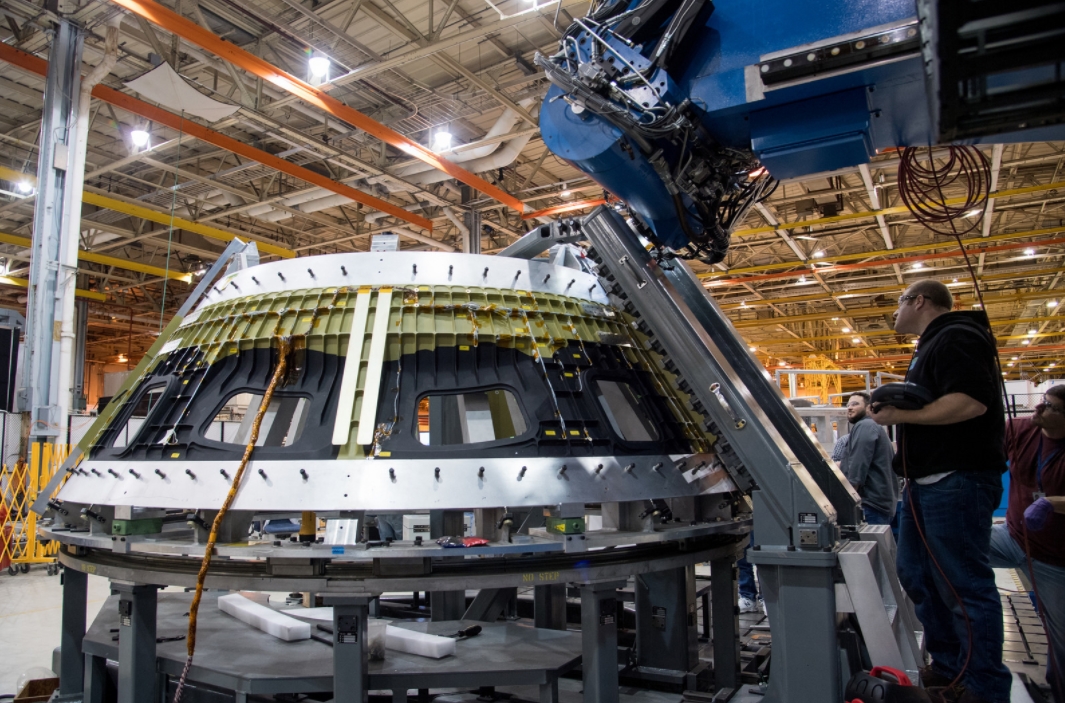 Welding tool for Orion – via NASA.

After welding, non-destructive evaluation (NDE) is used to inspect them.  “[We use] ultrasonic inspections there to basically look for any kind of defects or flaws that are in those,” he said.

Brown also explained another work item for some of the welds: “We do what we call ‘planishing.’  [That] is where you literally pound it with a hammer,” he explained.

“That’s basically stress relief on those particular welds.  We’ve worked with that quite a bit in the past to identify which are the critical welds that we need to [remove] any kind of residual stresses that come from the weld process and the fit-up process itself.”

Once the pressure vessel is fully welded, bolted, and inspected, it will be cleaned and prepared to ship from MAF to KSC.  “There’s a shipping tool that we have, a fixture,” Brown said.  “You basically wrap it all up good and tight inside, and then you put it in this shipping crate.”

The pressure vessel can be shipped to KSC either by ground on a truck or by air using NASA’s Super Guppy aircraft.  “We’ve done both ways, truck and Guppy,” Brown added. 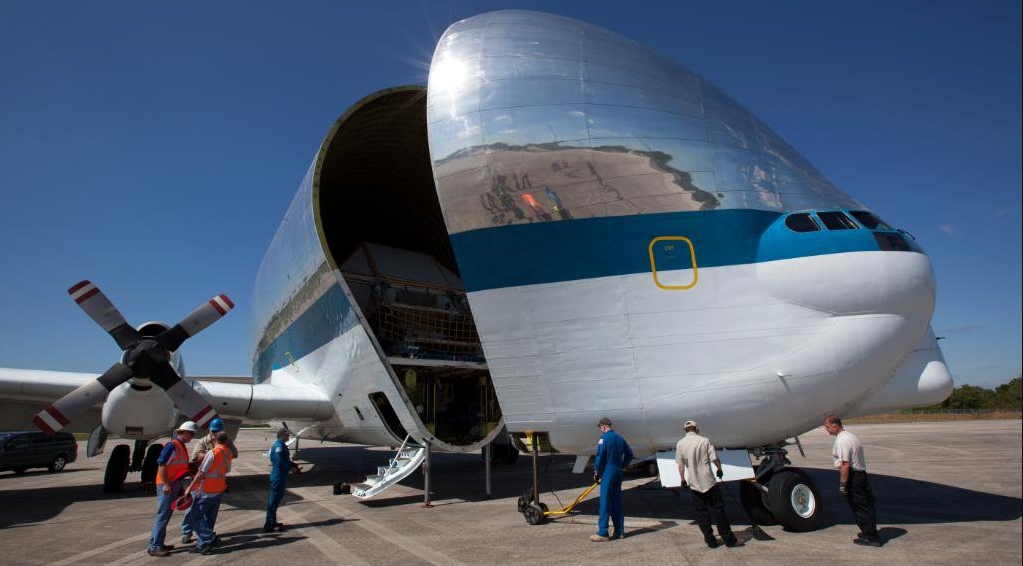 “[If] it goes on the truck, it’s then a wide load and we have a certain route, we do permits and all that kind of stuff to get it from Michoud over to KSC.  Certainly, the Guppy is the quickest [but] it depends on urgency and availability of the Guppy.  The Guppy is the easiest one, but sometimes it’s not necessarily available when we need it.”

Anderson said the pressure vessel is currently scheduled to arrive in Florida in September.  Once it arrives there and is transported to the Orion spacecraft processing area in the Operations and Checkout (O&C) Building at KSC, work will begin to complete the overall structure of the crew module.

One of the early processing milestones at KSC is proof pressure testing, which verifies that the pressure vessel is air-tight.  The structure is sealed and pressurized above and beyond the maximum expected pressure; this verifies structural integrity and margin. 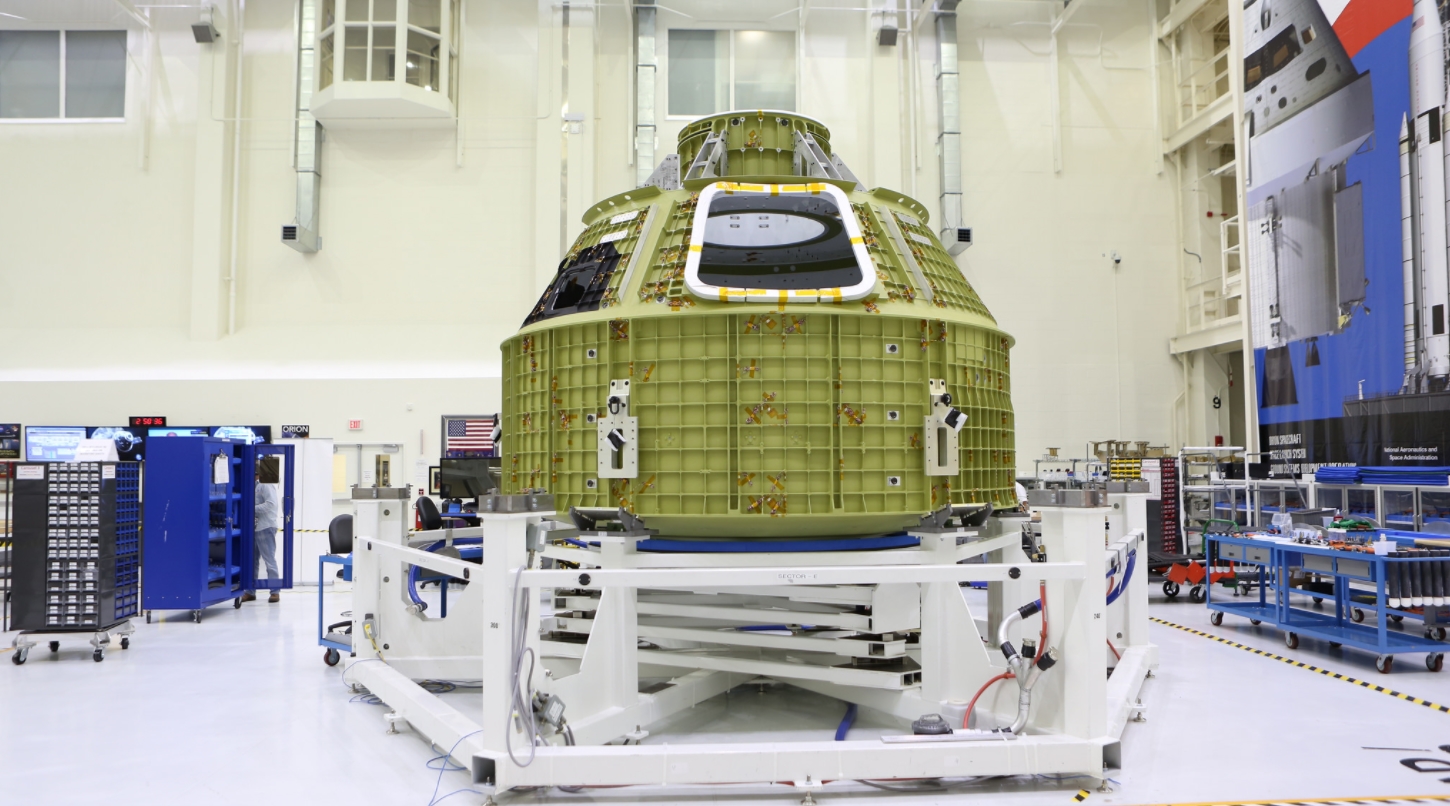 “We won’t have the final flight hatch configuration at that point, but basically we have [verified the] integrity of the pressure vessel,” Anderson added.  “We’ll instrument that and so on in that proof pressure test.”

Farther into processing, the spacecraft will continue to follow in the EM-1 crew module’s footsteps.

“We’ll do welding for propulsion and ECLSS — that’s going to be our clean room operation.  Within the O&C, there’s both clean room ops and normal ops.  When we do welding we have to go to the clean room.”