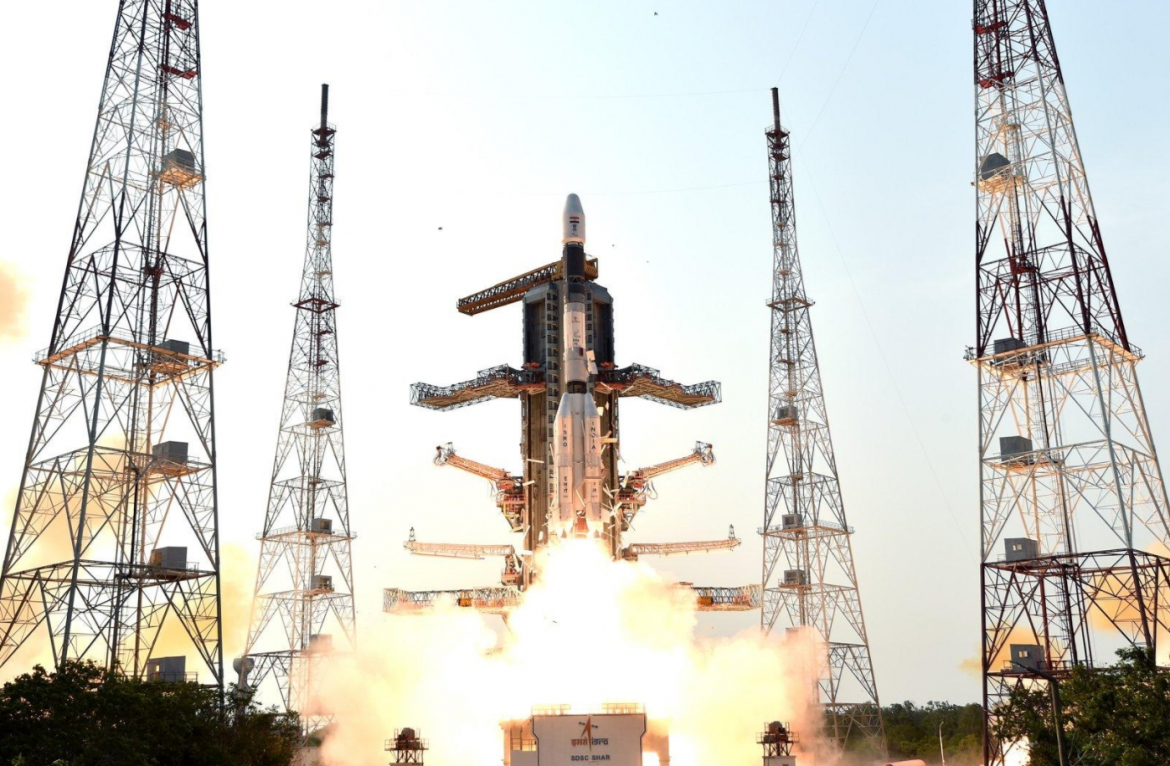 The GSAT-6A mission is a follow-up to GSAT-6, which was successfully deployed by a GSLV in August 2015. Like GSAT-6, GSAT-6A will relay communications from mobile handheld terminals used by India’s military. To facilitate this, each satellite carries ten S-band transponders and an unfurlable six-meter (20-foot) antenna, as well as a C-band payload with an 80-centimeter (2.6-foot) antenna. GSAT-6A will be co-located with GSAT-6 in geostationary orbit at a longitude of 83 degrees East, where it is expected to operate for at least ten years. 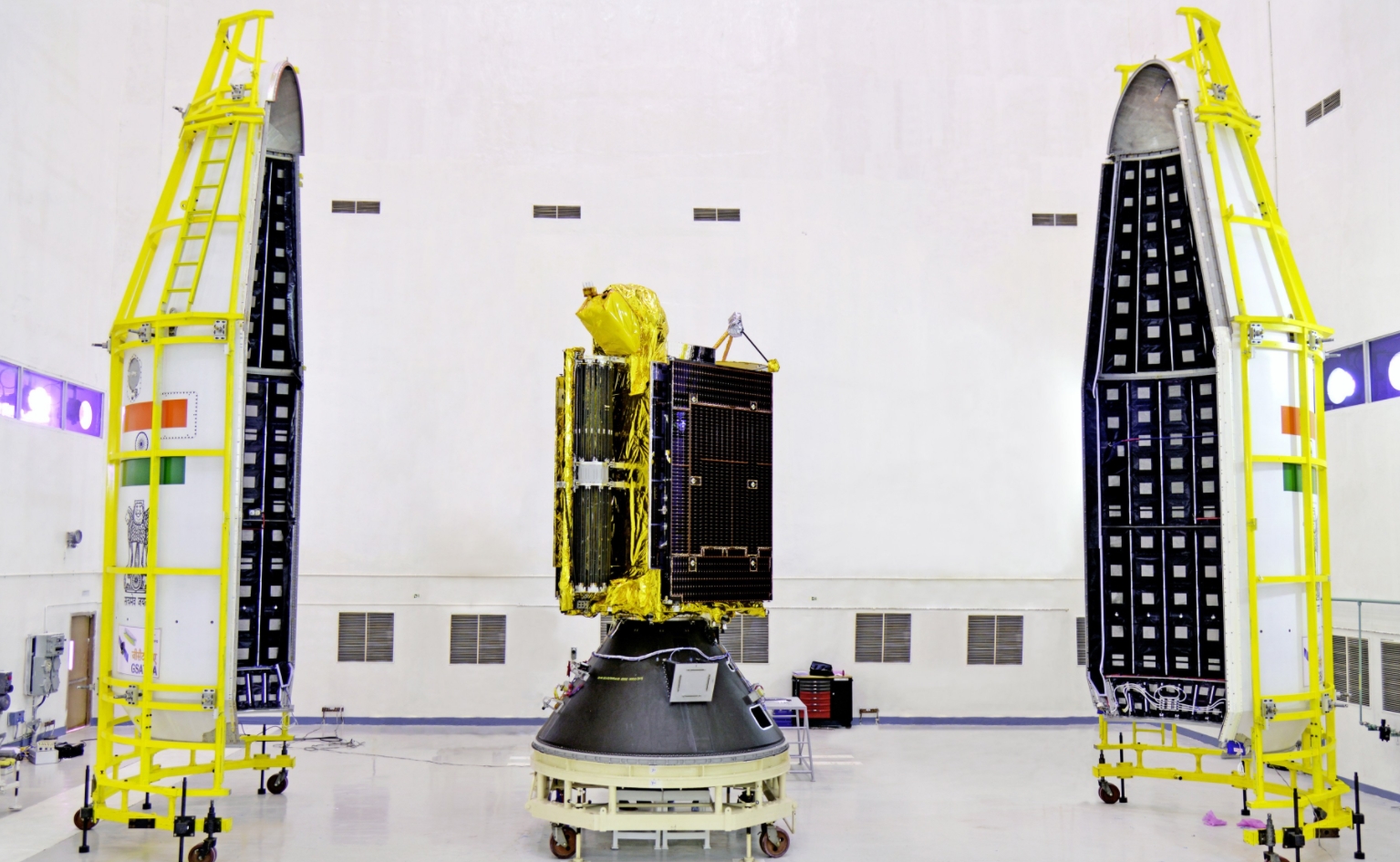 Thursday’s launch used the Mark II version of India’s three-stage Geosynchronous Satellite Launch Vehicle (GSLV Mk.II) – with its flight designated GSLV F08. Using a combination of liquid and solid-fuelled stages, the GSLV was designed to place communications satellites into geosynchronous transfer orbits. To this end, GSLV has increased performance over the smaller Polar Satellite Launch Vehicle (PSLV), from which it is derived.

The GSLV made its maiden flight in April 2001, carrying the experimental GSAT-1 communications satellite. The launch failed – with the rocket’s third stage shutting down too soon and leaving GSAT-1 in a lower-than-planned orbit. ISRO attempted to correct the satellite’s orbit using its own propulsion, but a design flaw in its fuel feed system led to the spacecraft running out of propellant before it could raise its orbit’s perigee to geostationary altitude.

Early GSLV missions used the Mark I version of the rocket, which incorporated a Russian-built KVD-1M third-stage engine. The Mark II, which has a stretched third stage with an Indian engine, first flew in April 2010 but its new engine failed to ignite. The first successful Mk.II launch took place in January 2014. India also has a GSLV Mk.III. However, this is a completely new rocket that reached orbit for the first time last year.

Excluding the Mk.III, Thursday’s launch was GSLV’s twelfth flight. In its previous eleven launches, GSLV has recorded six successes, four failures and one partial failure. The failures occurred on the rocket’s first, fourth, sixth and seventh launches – while the rocket’s upper stage underperformed during the fifth launch – placing the INSAT-4CR satellite into a lower-than-planned orbit. Unlike GSAT-1, INSAT-4CR was able to correct its own orbit. GSLV’s current run of four consecutive successful launches is the longest that the rocket has achieved. 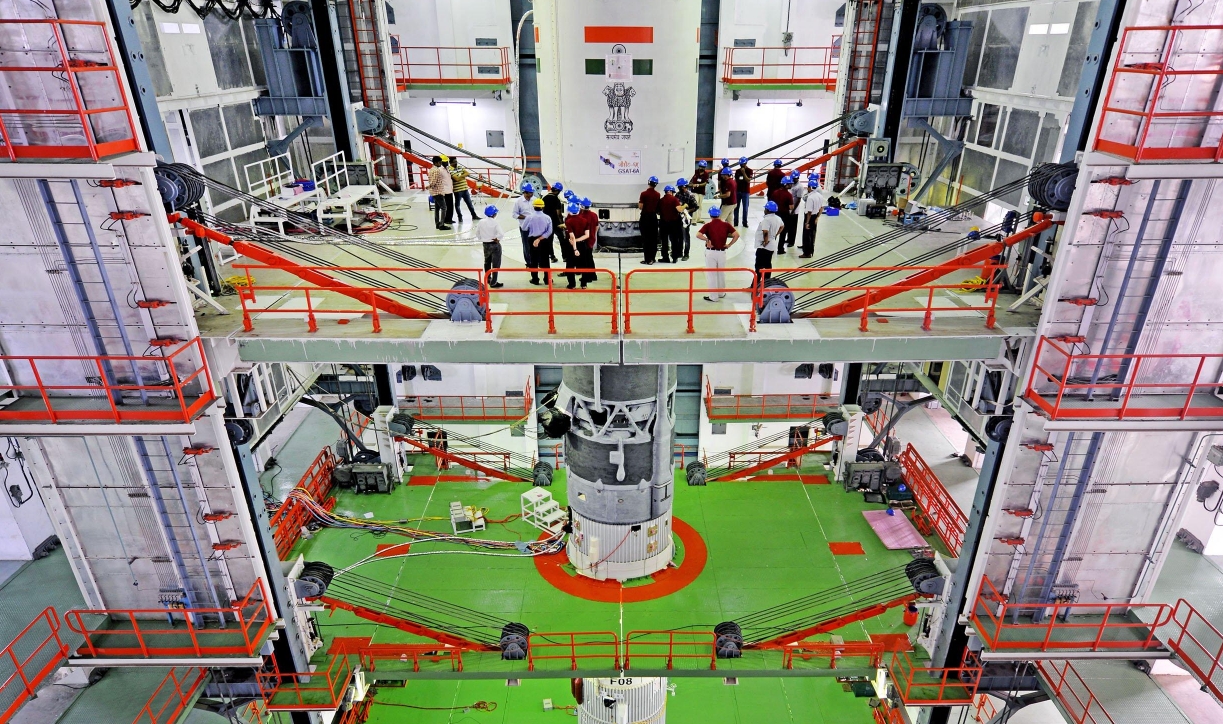 The GSLV for this latest launch – via ISRO

Thursday’s launch introduced upgrades to GSLV’s second stage, with an uprated engine and the replacement of hydraulic components with electromechanical systems. The High Thrust Vikas Engine (HTVE) replaces a standard Vikas engine that was used on the second stage in previous flights. HTVE has a higher chamber pressure – 6,200 kilopascals (899 psi) instead of 5,800 kPa (841 psi) – increasing its thrust. Vikas is an Indian license-built version of the French Viking engine, which powered Europe’s Ariane 1, 2, 3 and 4 rockets.

The stage’s new electromechanical components will simplify the rocket’s systems, with a view to improving reliability.

As a result of the upgrades, GSLV’s payload capacity to geosynchronous transfer orbit (GTO) has been increased by about 70 kilograms (150 lb). Once Thursday’s launch has validated the HTVE in flight, ISRO will incorporate the new engines in an upgraded version of GSLV’s first stage for future launches, while improvements to the third stage are also planned. This further upgraded GSLV will be used to launch ISRO’s Chandrayaan-2 mission to the Moon later this year and can carry a further 180 kilograms (400 lb) to GTO.

Thursday’s launch took place from the Second Launch Pad (SLP) at ISRO’s Satish Dhawan Space Centre (SDSC). Satish Dhawan – which was named the Sriharikota High Altitude Range (SHAR) until 2002 – has been the site of all of India’s orbital launches. ISRO’s early rockets – the Satellite Launch Vehicle (SLV) and Augmented (or Advanced) Satellite Launch Vehicle (ASLV) flew from now-disused pads to the south of the active First and Second Launch Pads. The First Launch Pad (FLP) came on-line in 1993 with the PSLV’s maiden flight, while the second pad was first used in May 2005.

GSLV heading to the pad – via ISRO

In preparation for Thursday’s launch, the GSLV was integrated vertically in the Vehicle Assembly Building, located about a kilometer (0.6 miles) southwest of the launch pad. The rocket was transported to the pad, atop its mobile launch platform, a few days ahead of the planned launch. The twenty-seven-hour countdown began at 13:56 local time (09:26 UTC) on Wednesday.

GSLV’s first stage – or GS1 – consists of an S-139 solid rocket motor with four L-40H boosters attached to it. Each L-40H is powered by a Vikas engine, burning UH-25 propellant – a mix of two parts unsymmetrical dimethylhydrazine and one part hydrazine hydrate – oxidized by dinitrogen tetroxide (N2O2).

The four Vikas engines on the first stage boosters ignited about 4.8 seconds before Thursday’s countdown reaches zero, with the S-139 igniting at the zero mark. With the core motor lit, GSLV F-08 lifted off to begin its journey into orbit. Shortly after liftoff, GSLV pitched over and fly East of Sriharikota, on a planned azimuth of 106 degrees.

The S-139 motor burned for about 106 seconds before exhausting its propellant. The liquid-fuelled boosters continued to burn for another 43 seconds before emptying their own propellant tanks. Six tenths of a second after the first stage’s liquid-fuelled engines burnt out, the second stage ignited – testing its HTVE engine in flight for the first time. The first stage does not separate until 1.6 seconds after second stage ignition.

The second stage of GSLV – the GS2 or L-37.5H – is powered by the single HTVE engine which burns the same combination of UH-25 and dinitrogen tetroxide as the L-40H boosters. It fired for 136 seconds, with the rocket’s payload fairing separating 74 seconds into the burn. The fairing – which protects GSLV’s payload as the rocket ascends through the atmosphere – was no longer needed once the vehicle enters space and is discarded to save weight. 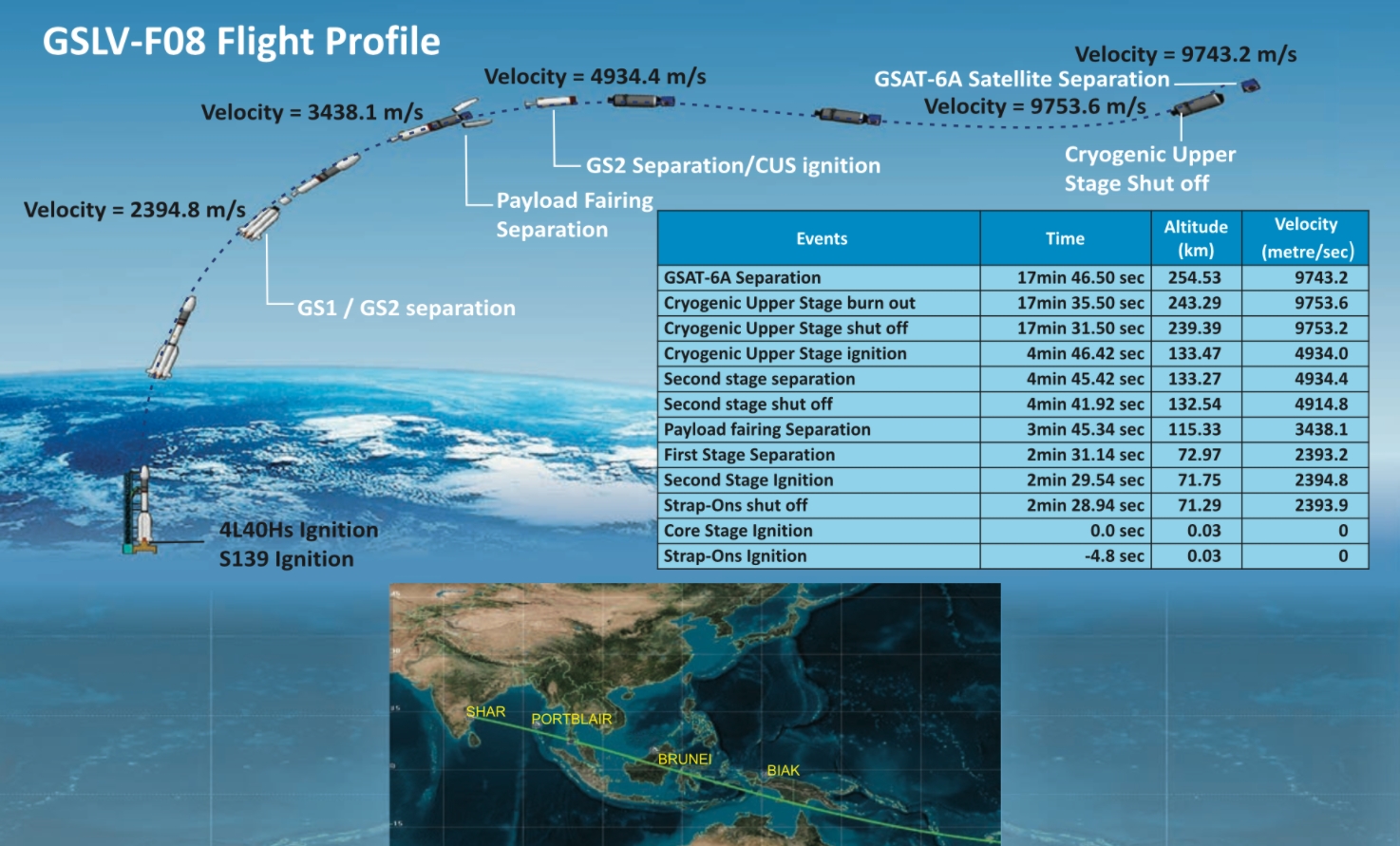 Three and a half seconds after second stage cutoff, the stage was jettisoned. One second later the Cryogenic Upper Stage (CUS) ignited. The CUS – also known as GS3 or C12.5 – is powered by a CE7.5 engine providing 7.5 tonnes (73.5 kilonewtons, 16,500 pounds-force) of thrust. It burns liquid hydrogen propellant, oxidized by liquid oxygen.

The upper stage burned for twelve minutes and 45-50 seconds, accelerating GSAT-6A to a peak velocity of 9.75 kilometers (6.06 miles, 5.26 nautical miles) per second – or 21,800 miles per hour. The exact burn time is not known as the third stage will burn until it runs out of liquid oxygen, instead of cutting off once a specific target is reached.

GSAT-6A will perform three orbit-raising maneuvers to effect a combined change in velocity of 1.66 kilometers (1.03 miles, 0.90 nautical miles) per second – or 3,713 miles per hour. This will leave the spacecraft in its planned geostationary orbit.

Thursday’s launch was India’s second of 2018, following a successful PSLV mission in January that deployed Cartosat-2F. ISRO will next be in action around 12 April, with a PSLV due to place the IRNSS-1I navigation satellite into orbit. GSLV is next expected to fly in October, when it will carry Chandrayaan-2 on the first leg of its mission to the Moon.