TESS – the latest exoplanet finder – in final preparations for launch 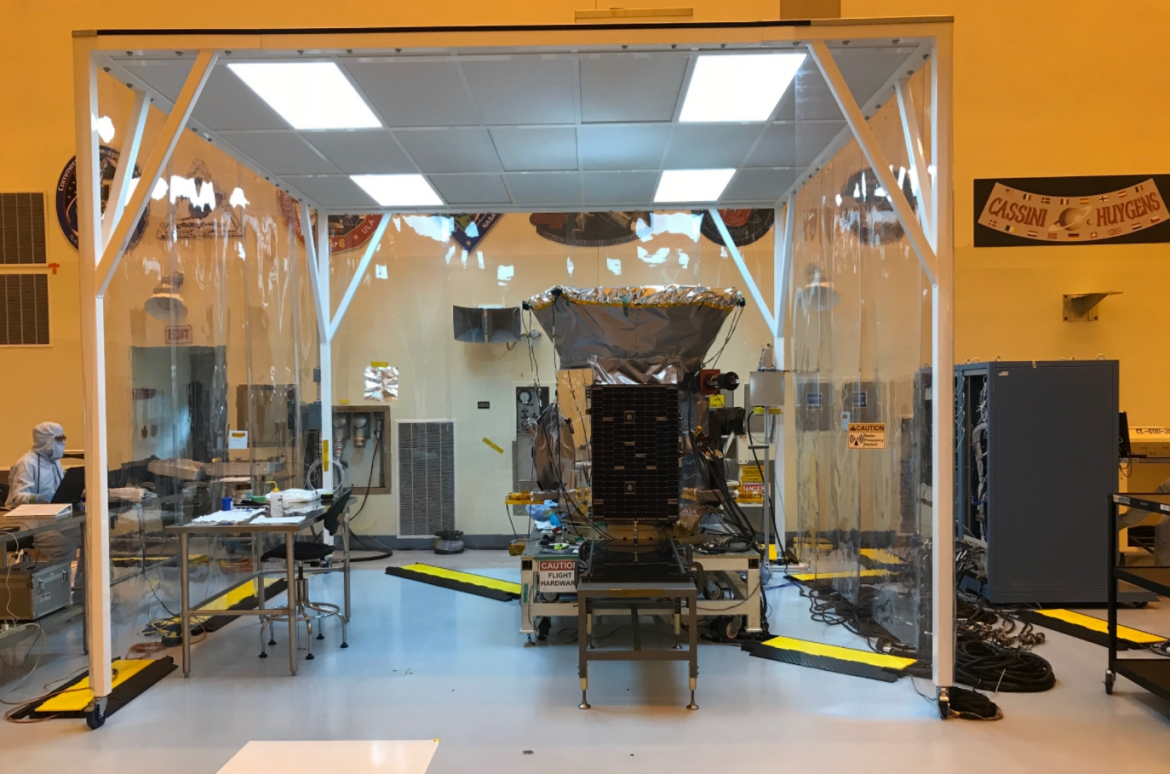 Next month, SpaceX is set to launch the Transiting Exoplanet Survey Satellite, or TESS, is the next step in humanity’s ongoing effort to discover and characterize exoplanets, including planets that might host life. The spacecraft is currently scheduled to launch on a Falcon 9 on April 16 from SLC-40 at Cape Canaveral.

The TESS project has its origins in a concept study at MIT in the mid-2000’s and was submitted as an Astrophysics Explorer mission finalist in 2012, as a successor program to Kepler, which was at the time in its primary mission.

In April 2013, TESS was selected as a new Explorer mission, following in the footsteps of Explorer 1, America’s first successful orbiting satellite, the mission that discovered the Van Allen radiation belts around Earth, and missions like COBE (Cosmic Background Explorer) which made groundbreaking discoveries about the Big Bang and resulted in a Nobel Prize.

The mission, led by MIT Kavli Institute and Principal Investigator Dr. George Ricker, is intended to be the first (nearly) space-based all-sky exoplanet survey, covering all parts of the sky except for small parts of the ecliptic (which may be covered in an extended mission), a survey that will discover far more exoplanets on its own than all other space and ground-based observatories have done to date.

Regarding where TESS fits in the astrophysics and exoplanet program, Dr. Ricker states, “The role that TESS actually has, when it launches, is basically to be a bridge between Kepler and follow-on missions. In particular Webb, and future missions that we’re anticipating will come online in the next 40 or 50 years.” 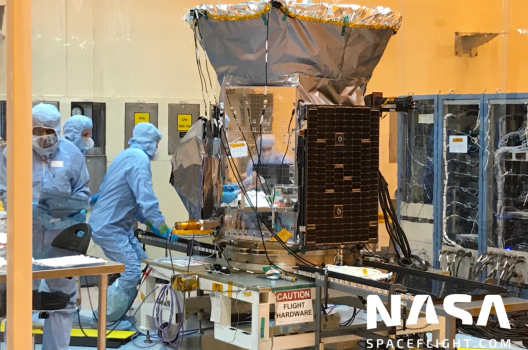 The TESS Spacecraft – Photo by Chris Gebhardt for NSF

The sunshade is necessary for high-quality observations of the stars TESS would be tasked to observe. Finally and most importantly, TESS features four MIT Lincoln Labs-made CCD cameras as the science payload.

These cameras are extremely sophisticated and are among the most sensitive astronomical instruments ever produced. The CCD wafers are 100 microns thick and are very sensitive to cool M-class red dwarf stars, which make up the majority of stars in the sky, and were custom made at MIT.

The cameras each have an athermal design, a 24×24 degree field of view, and each camera features seven lens elements plus a 100 mm effective pupil diameter. Each camera has a 16.8 Megapixel resolution for a total of over 64 Megapixels and has a band pass from 600 to 1000 nm (the red and near-infrared side of the electromagnetic spectrum). The cameras also have lens hoods to keep out stray light that could interfere with their observations.

These cameras are mounted on an optical plate which Orbital ATK spacecraft program director Robert Lockwood describes as “a very rigid, low thermal expansion type of structure, so that the cameras stay very fixed all the time, relative to each other.” 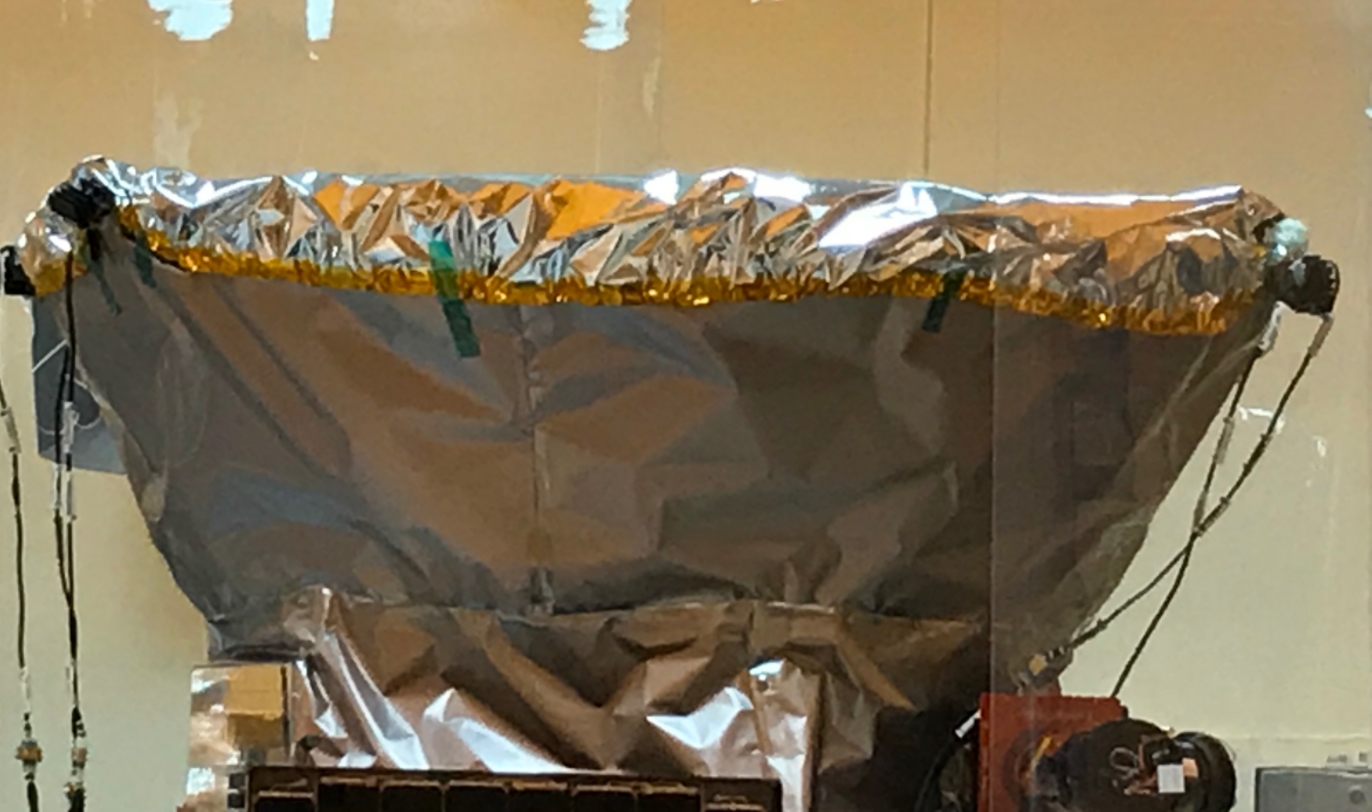 TESS is currently scheduled for launch on April 16, 2018 from Cape Canaveral Air Force Station, Florida, from Launch Complex 40, aboard a Falcon 9.

After launch, the F9’s second stage and then the spacecraft thrusters will send TESS into an elliptical high Earth orbit with a 2:1 resonance with the Moon using a lunar flyby as part of the process. 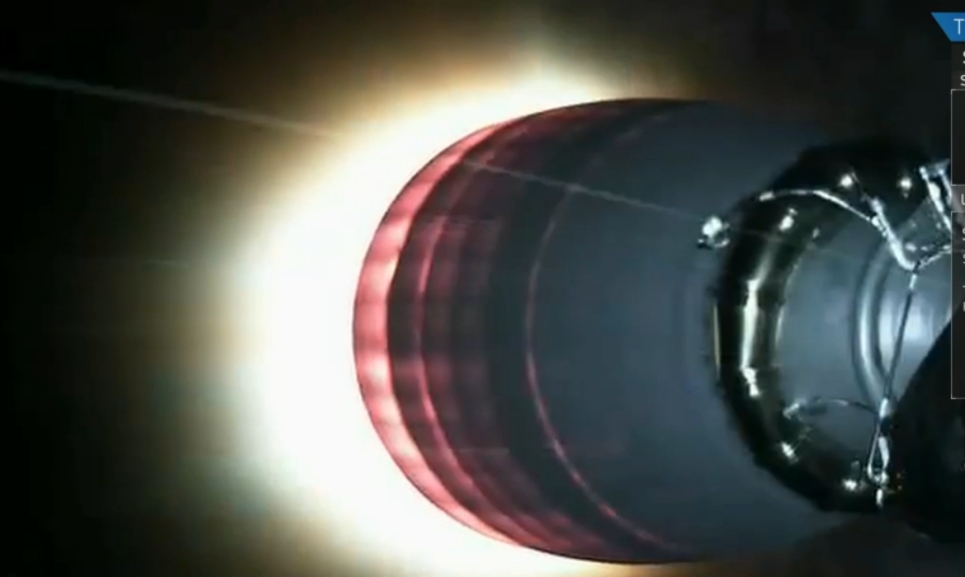 TESS will begin a 60 day commissioning process to activate its scientific payload and to move to a 17 earth radii (108,307 km/67,298 mi) by 59 earth radii (375,889 km/233,566 mi) science orbit. Once TESS is in its proper orbit it will start a two year primary mission to find exoplanets transiting bright stars, covering 85% of the sky, as opposed to Kepler, which viewed a very narrow slice of sky in the constellations Lyra and Cygnus during its primary mission.

The TESS spacecraft will scan the sky in the Southern Hemisphere for the first year, and the northern hemisphere the second year. TESS, using four gyroscopes, will point its cameras at a 24 x 96 degree sector of the sky and cover it from the ecliptic to the celestial pole for 27 days, then move on to the next sector and so on.

There are 13 sectors per hemisphere, and each sector overlaps near the celestial pole for continuous coverage and the ability to observe long period planet transits (similar to Earth orbiting the Sun) in that area, along with shorter period transits around stars nearer to the ecliptic.

The data will be processed and sent to the Science Processing & Operations Center (SPOC) for further handling including the creation of light curves and detection of transit signatures, and after this processing the data will be sent to the TESS Science Office (TSO) which will identify objects of interest for follow-up observations. The data will also be archived at the Mikulski Archive for Space Telescopes (MAST) and the data will be available for public use. 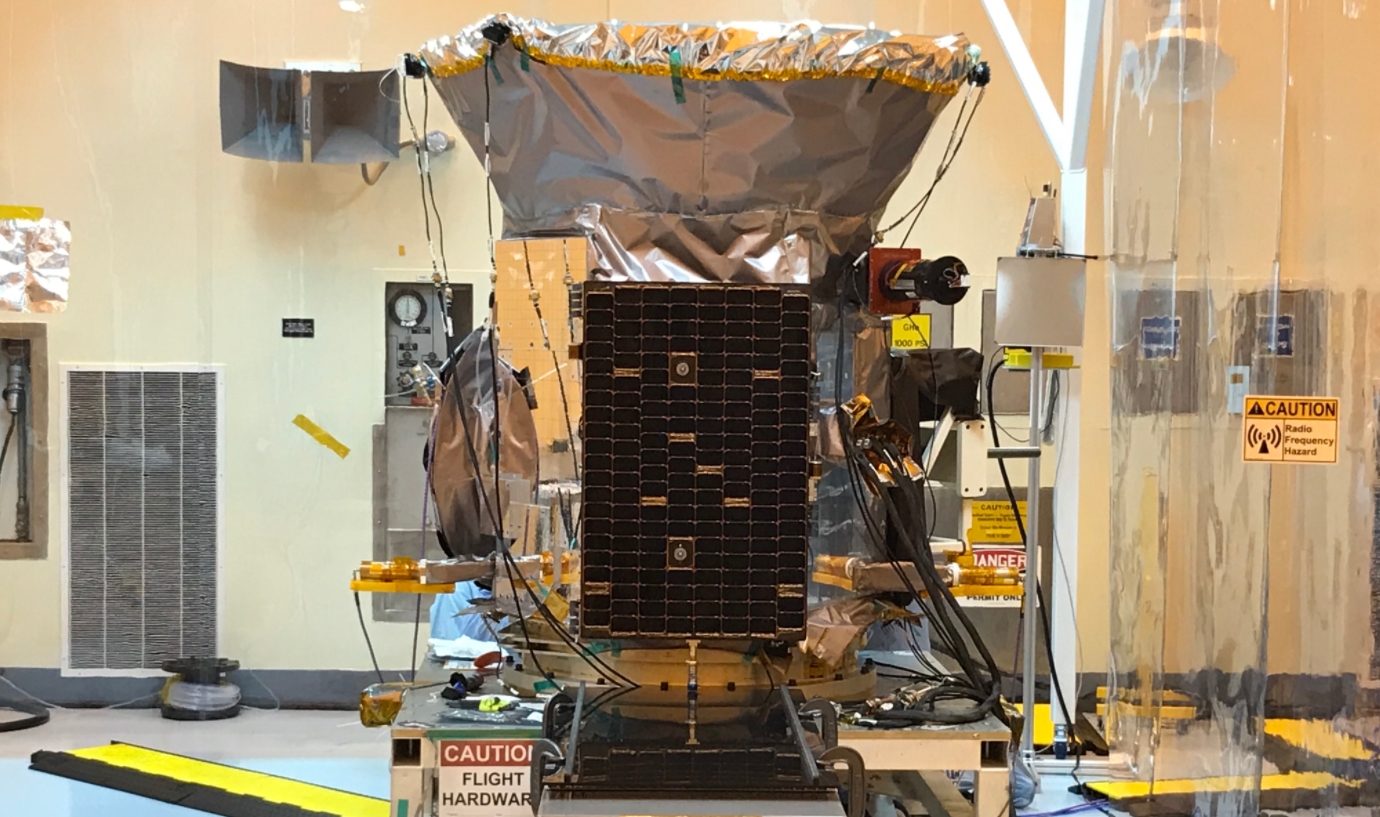 TESS in final processing – photo by Chris Gebhardt for NSF

The 100 mb/s data rate is much higher than Kepler and other beyond low earth orbit science missions have used to date, and a portion of the Ka-band will be used due to ITU regulations.

Orbital ATK’s Robert Lockwood stated regarding what the Deep Space Network calls the Ka2 band, “26 GHz, is really the band that is allocated for those missions that are not deep space. And so that was available and really, that’ll be the second time using that band. But it’s available and we’ve tested it out fully with DSN and it works very well.”

When TESS reaches its orbital perigee every 13.7 days the craft will transmit its data to Earth, then continue observing its designated sector of space.

TESS is set to observe approximately 200,000 dwarf stars, ranging from F5 stars larger and hotter than the Sun to G and K Sun-like stars to M5 red dwarf stars, within 100 parsecs (300 light years) of the Sun. These stars, ranging from naked-eye brightness to magnitude 13, are much brighter than the stars studied during the Kepler mission and will be far better candidates for follow-up studies than the stars in Kepler’s field of view, most of which are too dim and far away for good follow-up studies from JWST or ground-based observatories.

As Dr. Ricker put it, “These are the ones that are close to the solar neighborhood that TESS is really going to focus on. And the reason that we’re focusing on the solar neighborhood is that the host stars are going to be bright. You’re going to have a lot of photons for follow-up work, which involves spectroscopy or polarimetry or a lot of other techniques that both ground-based and space-based astronomers are going to use.”

Approximately 20,000 exoplanets, including 300 “super-earths” or lesser-sized planets, are expected to be found by TESS during its primary mission (compared to 3000+ exoplanets discovered to date by Kepler and other observatories), which will greatly expand humanity’s burgeoning catalog of exoplanets.

The planets TESS finds will be extensively studied by JWST and other observatories in space and on the ground, and their masses would be obtained by means of radial velocity observations (TESS would only be able to get the sizes of the planets and not their masses). 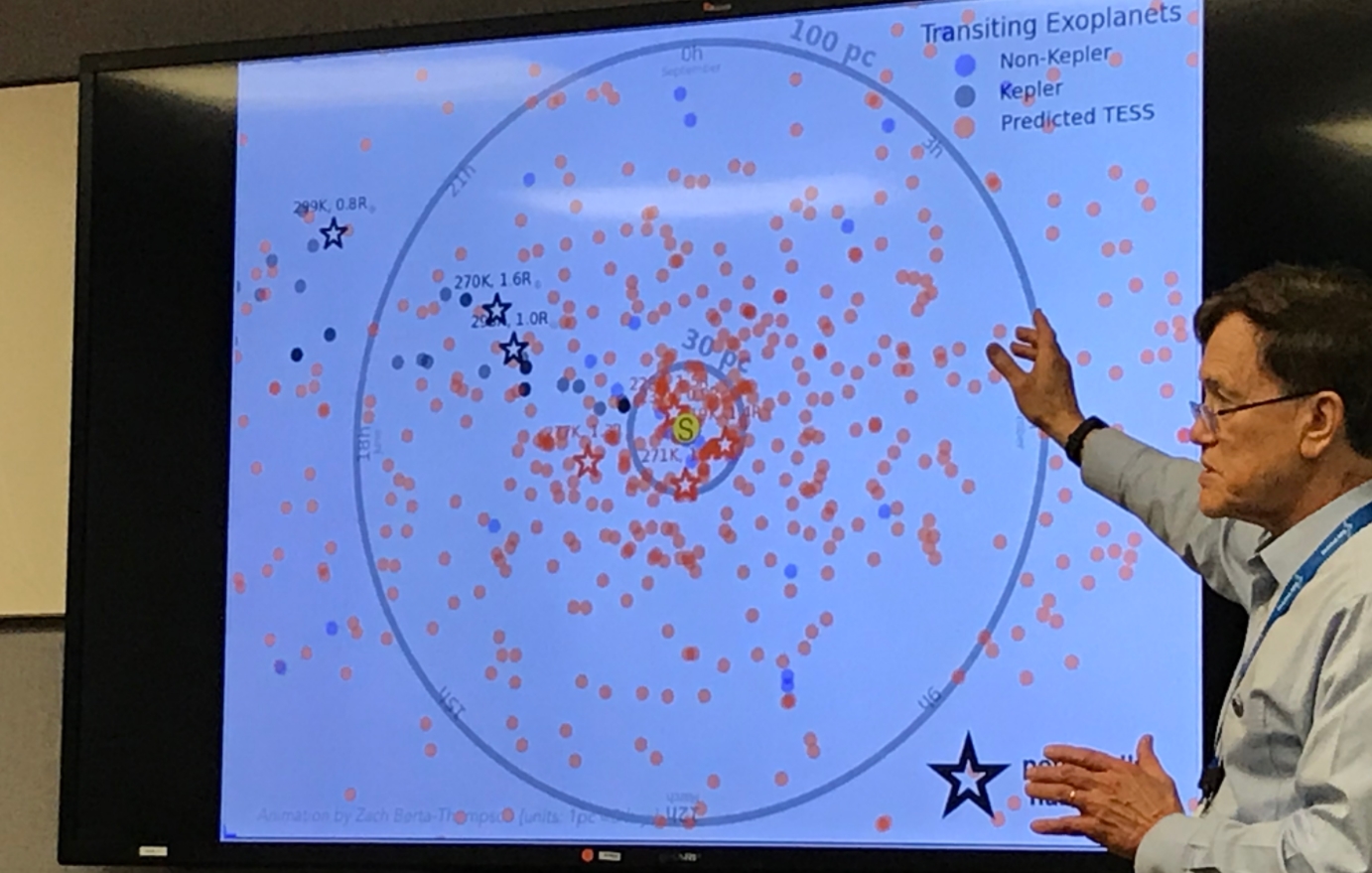 Once the masses and sizes of the planets are found their densities can be calculated and they can be characterized as rocky planets, water worlds, or “mini-Neptune” ice giants or gas giants like Jupiter. Future observatories like JWST and the budget-threatened WFIRST, as well as large ground-based telescopes like E-ELT, can also obtain the spectra of these worlds and find out if they have atmospheres and what those atmospheres are made of

The TESS mission’s “full frame” images (covering up to the equivalent of 10,000 Moons in one frame, with a very wide field) will be able to cover up to 20 million stars and it is expected that TESS results will not be limited to exoplanets but will also deliver insights on colliding neutron stars (and resulting gravitational waves), type 1a supernovae, and other space phenomena.

Although TESS is nominally projected for a two year primary mission, it has been designed so that it can last much longer, and its high Earth orbit is designed so that TESS does not have to use much hydrazine fuel to maintain operations, and radiation hazards and stray light are minimized. Temperatures are very stable in the chosen orbit, and the orbit itself will stay stable for decades, so extended missions are possible up to 20 years into the future. These extended missions can extend the TESS exoplanet catalog and confirm planets that may otherwise be missed during the primary mission.

Regarding the mission’s legacy, Dr. Ricker states, regarding the stars TESS will observe, “And once we’ve found the planets associated with them, those are going to be the primary candidates that everyone, all astronomers for centuries to come, are going to focus on these objects. And that’s the excitement that we have about this mission, is this is really a mission for the ages.”

The TESS mission is expected to be a discovery machine, as Dr. Ricker put it, “There are a lot of things when you have an instrument that has this large of a field of view looking at the sky in an uninterrupted way, there’s just an incredible amount of science that will come out that we’re not even anticipating from TESS.“