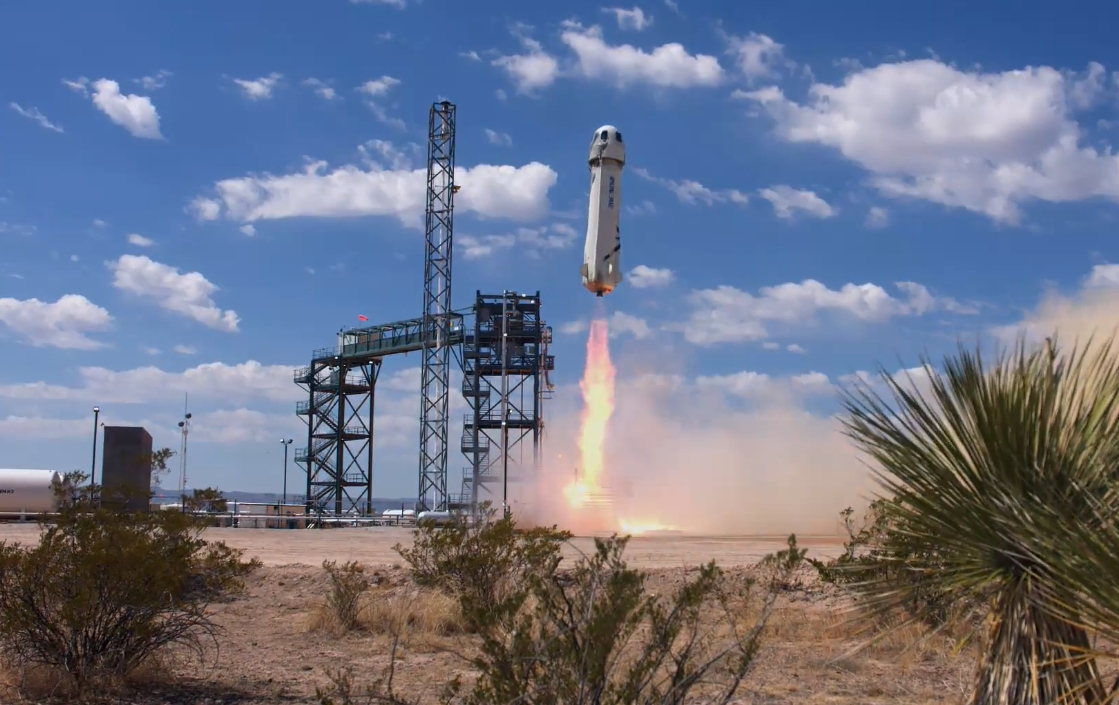 Blue Origin returned to its New Shepard test flight campaign on Sunday with its eighth flight of its reusable rocket. The short hop will include numerous payloads, which launched in the capsule section from Blue Origin’s test site in West Texas. Launch occurred around 17:07 UTC after some slight delays due to local thunderstorms and numerous holds during the latter part of the countdown.

New Shepard is the first of a potential line of vehicles for Blue Origin. The rocket and crew capsule system is aimed at the suborbital tourism market, allowing paying customers to enjoy into a few minutes of zero-G flight prior to a parachute-assisted landing.

The test program is aimed at testing the technology, with a string of successes already to its name.

However, that first test did not result in the recovery of the booster because of a loss of pressure event in the booster’s hydraulic system.

The second flight occurred in November 2015 and kick-started a successful run of test flights, with the New Shepard booster lofting its Crew Module to an altitude of 329,839 feet before returning under powered control to an upright landing – marking the first time a suborbital rocket successfully landed after a straight-up/straight-down flight.

After this second full-scale test and before the third, the New Shepard booster from the second test underwent a solo, non-capsule re-flight on January 22, 2016. 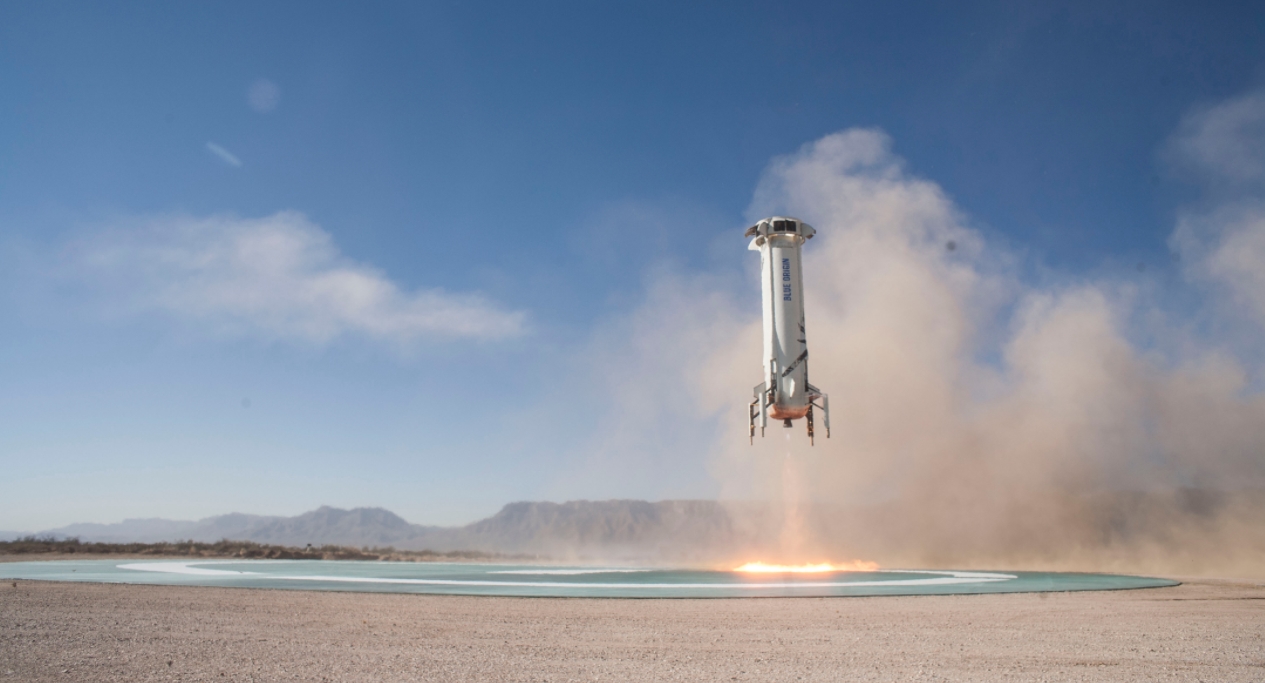 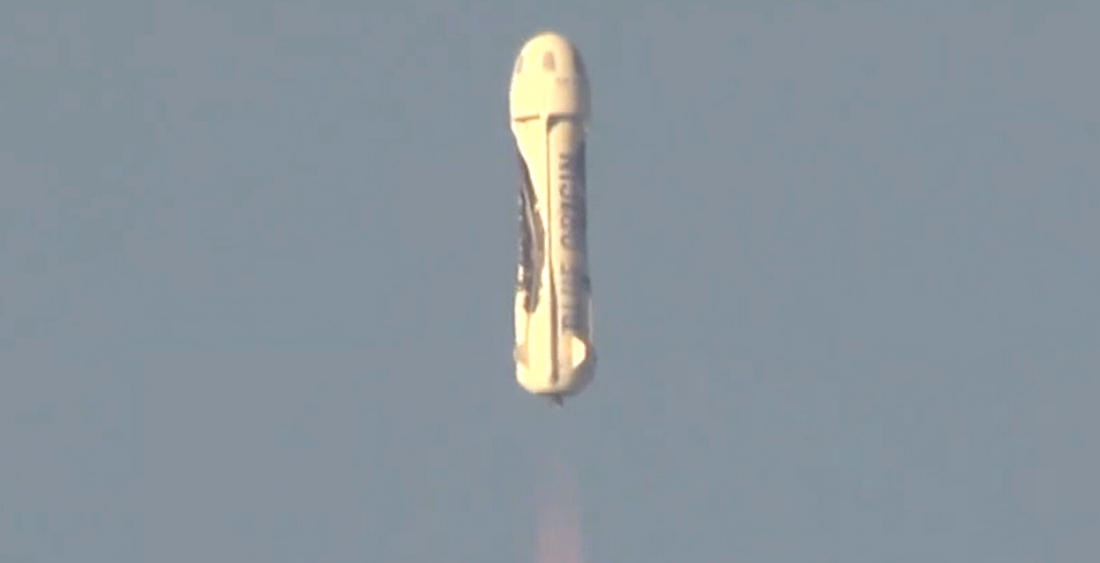 That previous test series concluded with a successful abort test, which was expected to result in the loss of the booster.

The October 2016 test closed out a run of four successful test flights in the year, with the latter testing its new pusher abort system that’s designed to safely separate the New Shepherd crew capsule from the New Shepard booster in the event of an anomaly during powered flight.

It was expected the exhaust from the pusher system would impact on the booster. However, it continued to fly and then successfully landed, along with the crew capsule, which was the primary goal of the test.

The prize for the booster’s survival was a well-earned retirement from test operations and a tour of Blue Origin events around the United States. It has since been delivered to Blue Origin’s new facility on the Space Coast, and is on display in the factory.

The seventh test featured a new next-generation booster – powered by its BE-3 engine – and the first flight of Crew Capsule 2.0, a spacecraft that featured real windows, measuring 2.4 x 3.6 feet.

The next flight, which was successful on Sunday, also carried science payloads for the short trip into space, as part of a second round of commercial payloads onboard New Shepard for in-space science and technology demonstrations.

Most of the payloads are for universities. However, one is for NASA, namely the Suborbital Flight Experiment Monitor-2, or SFEM-2.

Mannequin Skywalker was also riding on board for his second flight.

Mannequin Skywalker is ready for his 2nd mission on board New Shepard. He’s a little sensitive about being called a “dummy”, as he will be conducting astronaut telemetry and science studies – a very important job! pic.twitter.com/h2ncpGWaTi

The flight altitude and flight time for the mission was likely to mirror that of Flight Test 7. During that test, the booster achieved Mach 2.94 on ascent & Mach 3.74 on descent.

However, Blue Origin announced late in the day that the test flight would push the altitude to 350,000 feet for this launch. They came close on the unofficial figure, marking the flight at 347,000 feet. Later an official figure of 351,000 feet was released, making this a record flight altitude for the capsule.

While testing with New Shepard continues, work on Blue Origin’s next vehicle – the New Glenn – is continuing, with more test firings of the BE-4 engine. 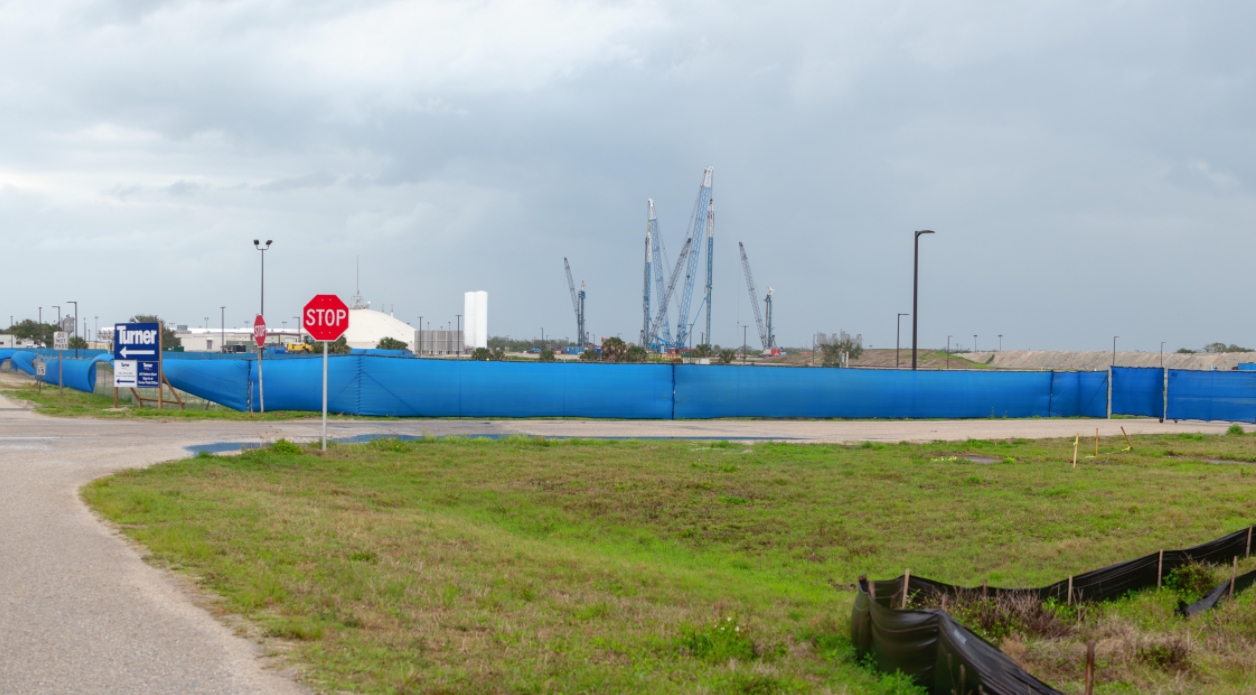 LC-11 will be used to test fire New Glenn engines, while LC-36 will be the launch site for the orbital rocket that is being placed to take on other vehicles in its class, such as those from SpaceX and United Launch Alliance.

Blue Origin continue to take 2020 for the maiden flight of the New Glenn rocket, which like its smaller sister New Shepard, will include a booster that will return for reuse.