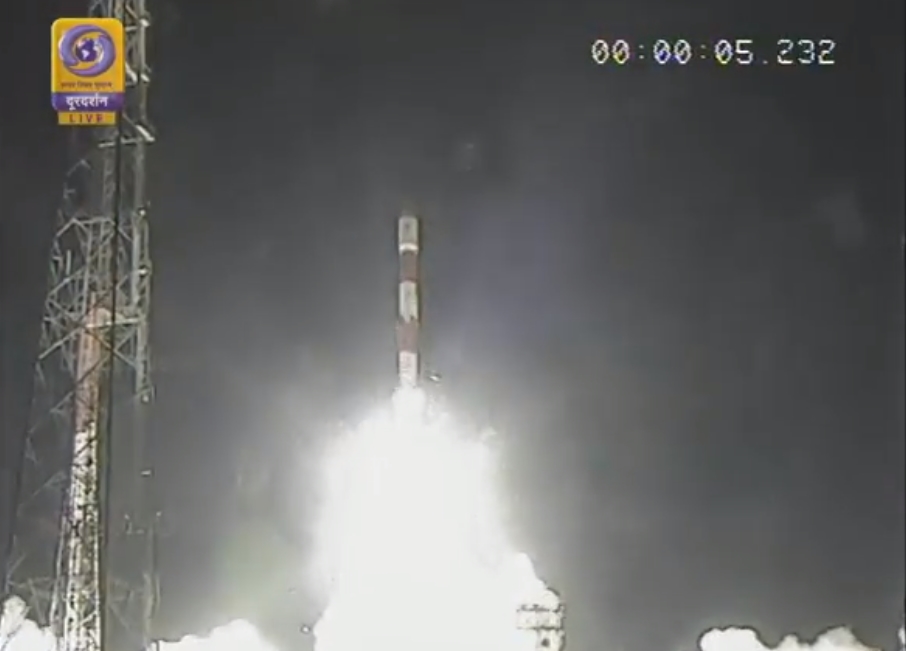 India launched a new satellite for its NavIC satellite navigation system Thursday, replacing a faulty spacecraft in orbit seven-and-a-half months after its intended replacement was lost at launch. The PSLV-XL rocket launched the IRNSS-1I from the First Launch Pad of the Satish Dhawan Space Centre at 04:04 local time (22:34 UTC on Wednesday).

The Navigation with Indian Constellation, or NavIC, system – also known as the Indian Regional Navigation Satellite System (IRNSS) – consists of multiple satellites deployed into geosynchronous orbit to give India its own dedicated satellite navigation system.

Serving both military and civilian needs, NavIC relies on seven satellites broadcasting highly-accurate timing signals that a receiver can use to triangulate its location.

IRNSS-1I will enter an inclined orbit, making a figure-eight around a point on the equator at a longitude of 55 degrees East. The IRNSS-1A and IRNSS-1B satellites currently occupy this slot.

The IRNSS-1I satellite that was carried by Thursday’s launch is the ninth spacecraft to be launched by the Indian Space Research Organisation (ISRO) for the project.

It is the second of two satellites that were originally built as ground-spares for the project, but which were pressed into service because of reliability issues with the atomic clocks aboard the spacecraft already in orbit.

The first ground-spare, IRNSS-1H, was lost in a launch failure last August, when the payload fairing of the PSLV-XL rocket that was carrying it to orbit failed to separate.

NavIC’s first satellite, IRNSS-1A, was launched in July 2013. Three years into what was expected to be a ten-year mission, one of the three atomic clocks aboard the satellite failed. The spacecraft’s other two clocks failed over the next six months, leaving it unable to broadcast navigation data.

While IRNSS-1A remains on-station to broadcast system messages to the constellation’s user, last August’s IRNSS-1H launch was to have replaced it with a new, healthy, satellite. With its failure, IRNSS-1I will now take on this role.

Even before IRNSS-1H was lost, IRNSS-1I was being prepared for launch in late 2017 or early 2018, in order to provide extra redundancy on orbit should another satellite malfunction.

ISRO’s four-stage Polar Satellite Launch Vehicle (PSLV) delivered IRNSS-1I to orbit. The PSLV, which flew in its most powerful PSLV-XL configuration, uses a mixture of solid and liquid propellants.

PSLV first flew in September 1993 – its maiden flight failing to deploy the IRS-1E remote sensing satellite after a guidance problem. The maiden flight is one of only two outright failures that the PSLV has suffered – the other being the loss of IRNSS-1H last August when the rocket’s payload fairing failed to separate – in forty-two launches prior to Thursday’s mission.

PSLV also recorded a partial failure in 1997, placing the IRS-1D satellite into a lower-than-planned orbit after a helium leak on the fourth stage.

The center, named the Sriharikota High Altitude Range prior to 2002, has been used for all of India’s orbital launches. Two launch pads are currently used for orbital missions – the First Launch Pad is used for PSLV launches, while the Second Launch Pad also accommodates the PSLV, as well as the larger GSLV Mk.II and GSLV Mk.III. Thursday’s launch used the First Launch Pad.

Despite its name, the First Launch Pad is not the oldest launch complex at the Satish Dhawan Space Centre – it is a separate complex to the pads used for India’s earlier launches with the smaller SLV and ASLV rockets. When launching from the First pad, PSLV rockets are stacked vertically directly atop the launch pad, with the aid of a mobile service tower. The tower was moved away from the launch pad prior to PSLV’s thirty-two-hour-long countdown getting underway on Tuesday.

The rocket that performed Thursday’s launch had the flight designation PSLV C41. In its PSLV-XL configuration, it consists of a four-stage PSLV core vehicle with six PS0M-XL solid rocket motors strapped to the first stage. Four of the PS0M-XL motors light while the rocket is still on the launch pad, while the remaining pair ignite a few seconds into the flight.

At the conclusion of the countdown on Thursday, PSLV’s first stage ignited. The first pair of boosters fired 0.42 seconds after the first stage, with the second pair igniting two tenths of a second later. The solid-fuelled first stage, designated PS1, consists of a single S-138 motor which will burn for about 113 seconds. Each PS0M-XL has an S-12 solid rocket motor.

The boosters on the PSLV for this launch – via ISRO

PSLV’s air-lit boosters ignited twenty-five seconds after liftoff, with the rocket already at an altitude of 2.7 kilometers (1.7 miles, 1.5 nautical miles). The ground-lit solids burned until a little under seventy seconds into the mission, separating in pairs at 69.9 and 70.1 seconds mission elapsed time. Following their own burnout, the air-lit motors separated at the 92-second mark in Thursday’s flight.

With the boosters gone, PSLV C41’s core stage continued to power the rocket towards space. The stage burned for a further 18.2 seconds before separating, with second stage ignition taking place two tenths of a second after staging.

PSLV uses a liquid-fuelled second stage – designated PS2 or L-40 – which is powered by a single Vikas engine. For Thursday’s launch a standard Vikas was used, not the upgraded version that ISRO first tested during last month’s GSLV launch. Vikas – derived from the French Viking engine that powered the European Ariane 1, 2, 3 and 4 rockets – burns UH25 propellant and dinitrogen tetroxide.

One minute and 32.8 seconds into the second stage’s burn, PSLV’s payload fairing was commanded to separate. The fairing, termed a “heat shield” by ISRO, protects PSLV’s payload as the rocket climbs through Earth’s atmosphere. With the rocket now in space, at an altitude of about 113 kilometers (70 miles, 61 nautical miles), the fairing was no longer needed and was discarded to save weight. During last August’s IRNSS-1H launch, part of the fairing separation mechanism failed to pressurize, resulting in the fairing remaining attached to the rocket.

Carrying the extra mass of the fairing for the remainder of its flight resulted in August’s launch attaining a lower-than-planned orbit. When IRNSS-1H separated from the rocket, it was still contained within the fairing, unable to maneuver or deploy its solar arrays or antennae. Since the IRNSS-1H failure, ISRO has conducted one more successful mission with the PSLV. The rocket returned to flight in January with the successful deployment of the Cartosat-2F remote sensing satellite.

A minute after fairing separation, the second stage cut off and separated. The solid-fuelled PS3 third stage ignited its S-7 motor 1.2 seconds after separation to continue the ascent. The third stage burn lasted about seventy seconds and was followed by a short coast.

Launch Profile after 1-2 Staging – via ISRO

IRNSS-1I separated from the PSLV about 37 seconds after the fourth stage completed its burn, at 19 minutes, 19.6 seconds mission elapsed time. Thursday’s launch is targeting a sub-synchronous transfer orbit of 284 by 20,650 kilometers (76 x 12,830 miles, 153 x 11,150 nautical miles), with an inclination of 19.2 degrees. IRNSS-1I will use its own propulsion system to maneuver to its operational geosynchronous orbit, with a delta-V – or total velocity change – of about 1.89 kilometers per second (1.19 miles per second) required to accomplish this.

Thursday’s launch was India’s third of 2018 and comes less than a fortnight after the country’s previous launch – which saw a GSLV Mk.II rocket deploy the GSAT-6A communications satellite. Although GSAT-6A was deployed successfully by the GSLV, ISRO lost contact with it shortly after launch, just after the satellite had completed a planned orbit-raising maneuver.

Engineers are now fighting to save the GSAT-6A mission. However, ISRO has confirmed that they have no concerns that IRNSS-1I could be affected by a similar problem. The thirteen-and-a-half days between the GSLV mission and Thursday’s PSLV launch will be the shortest turnaround that ISRO has yet achieved between two launches.

After Thursday’s launch, ISRO’s next mission is another PSLV launch that is expected around the end of May. While the primary payload for this launch has not yet been announced, it is understood to be targeting a sun-synchronous orbit and will carry secondary payloads including the Global-1 microsatellite for US Earth imaging firm BlackSky.