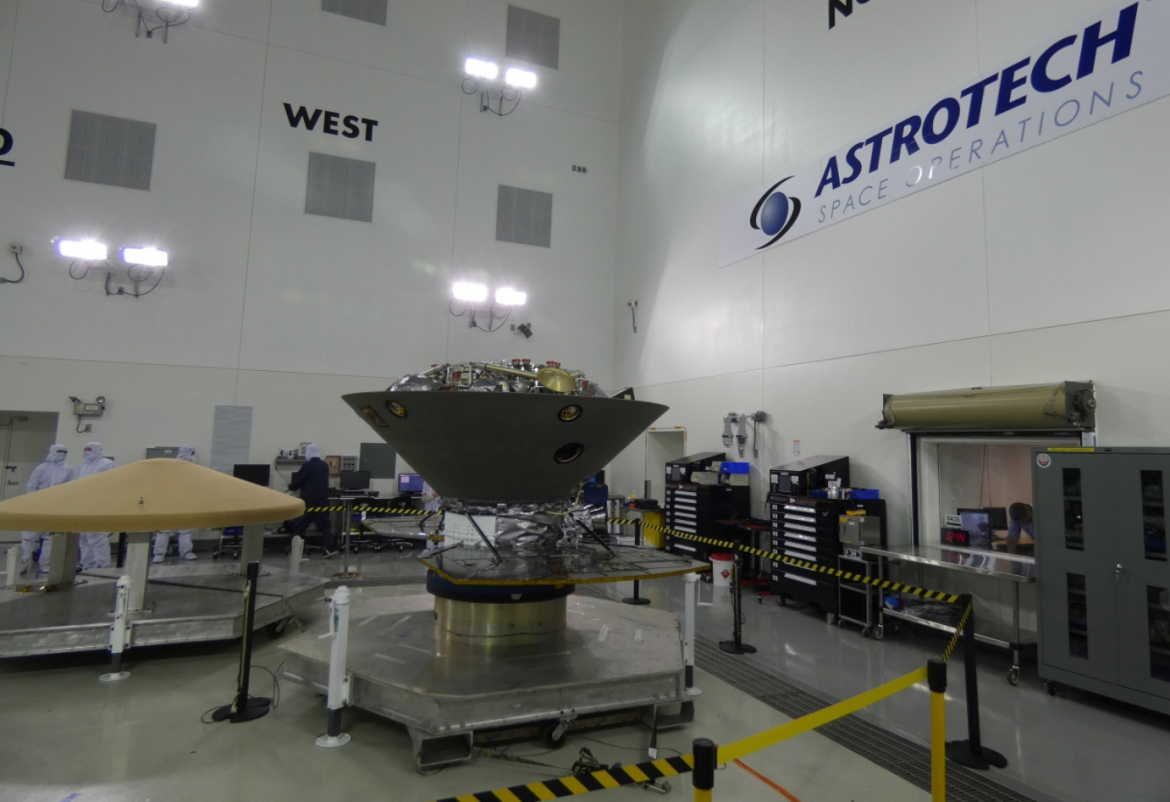 NASA’s InSight Mars lander is ready for the final processing sprint before its launch opportunity opens in a month’s time. NASA and prime contractor Lockheed Martin held a media day for the spacecraft, whose long name is the “Interior Exploration using Seismic Investigations, Geodesy and Heat Transport,” at its Vandenberg Air Force Base launch site on April 6, allowing for a last up-close look before it is sealed in its payload shroud for launch.

InSight’s launch opportunity this year runs from May 5 to June 8. It will be launched on a United Launch Alliance (ULA) Atlas V 401 rocket, which is also completing final preparations at Vandenberg’s Space Launch Complex-3 (SLC-3) for spacecraft mating in two weeks.

The lander is currently stationed in a “clean room” at the Astrotech Space Operations’ facility at North Vandenberg, where the NASA and Lockheed Martin team will finish final closeout activities, attach the full spacecraft to payload adapter and payload fairing, and then transport the mated assembly to SLC-3.

InSight is currently sitting in a “clean room” in one of the high bays at Astrotech’s facility. Like other interplanetary spacecraft, it has spent most of its time during assembly and testing in a clean room to protect against bacterial contamination.

The United States is obligated by international treaty to try to avoid harmful contamination of other celestial bodies and NASA must meet “planetary protection” requirements in order to get launch approval. 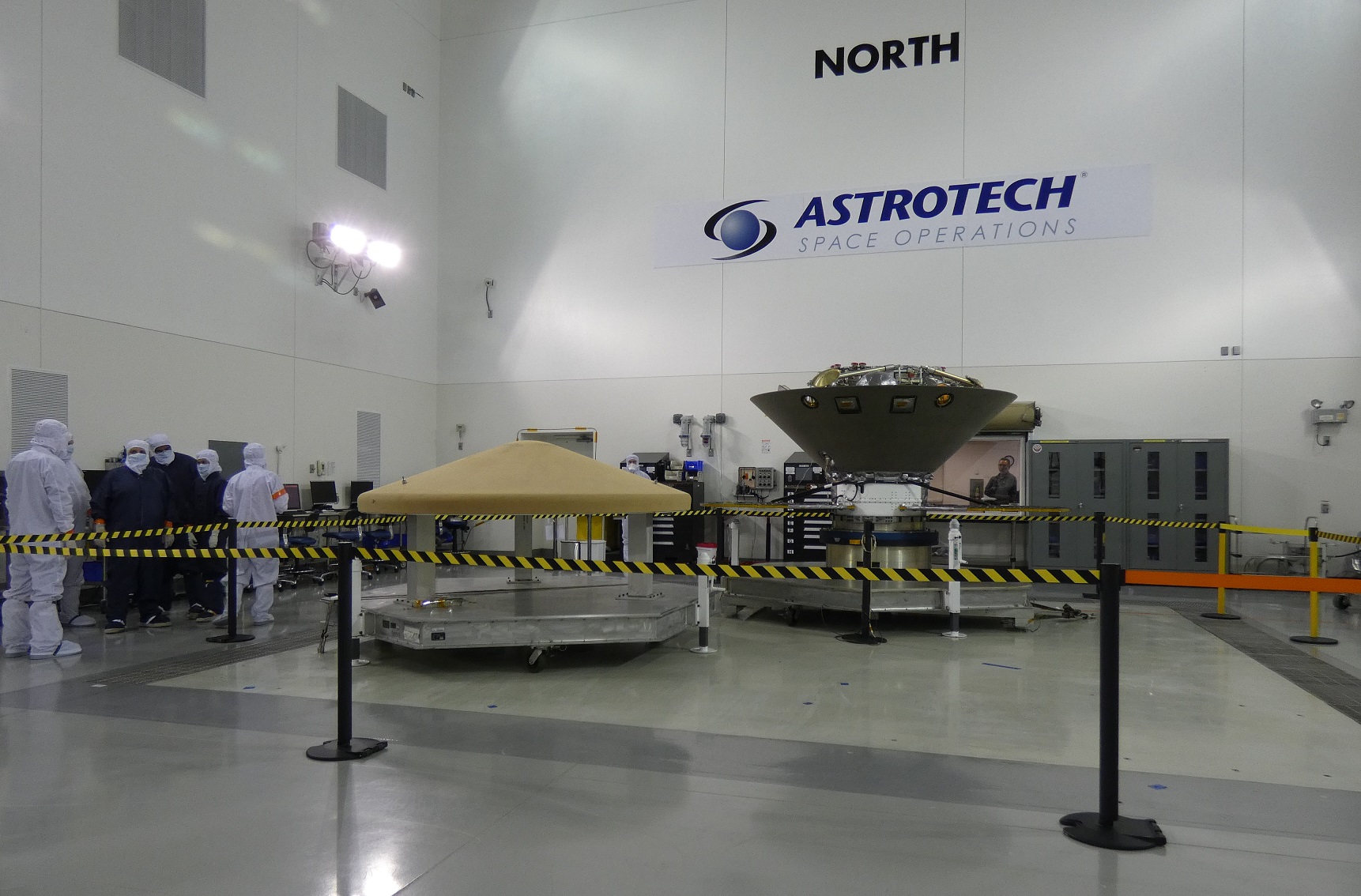 NASA has planetary protection personnel that manage and enforce practices and procedures to keep bacteria on the spacecraft to a minimum. A primary focus is on bacterial spores.

“We’re worried about the heartiest organisms that we have on Earth, which are microbes — specifically, a subset known as bacterial endospores or ‘spores,'” Ryan Hendrickson, a Planetary Protection Engineer with NASA’s Jet Propulsion Laboratory (JPL), explained.

“They behave similar to how bears do — with bears, when there’s not a lot of food around and the temperature is getting cold, it’s not very nice, they go into hibernation. Then when conditions do get better…and there’s a lot of food, they come back out of hibernation.”

“So some bacteria have that capability, where if they don’t have a lot of food around or they don’t like the temperature, they can form these spores and the spores can stay dormant for up to millions of years,” he said. “Those are the things that we specifically measure for and have requirements for.” 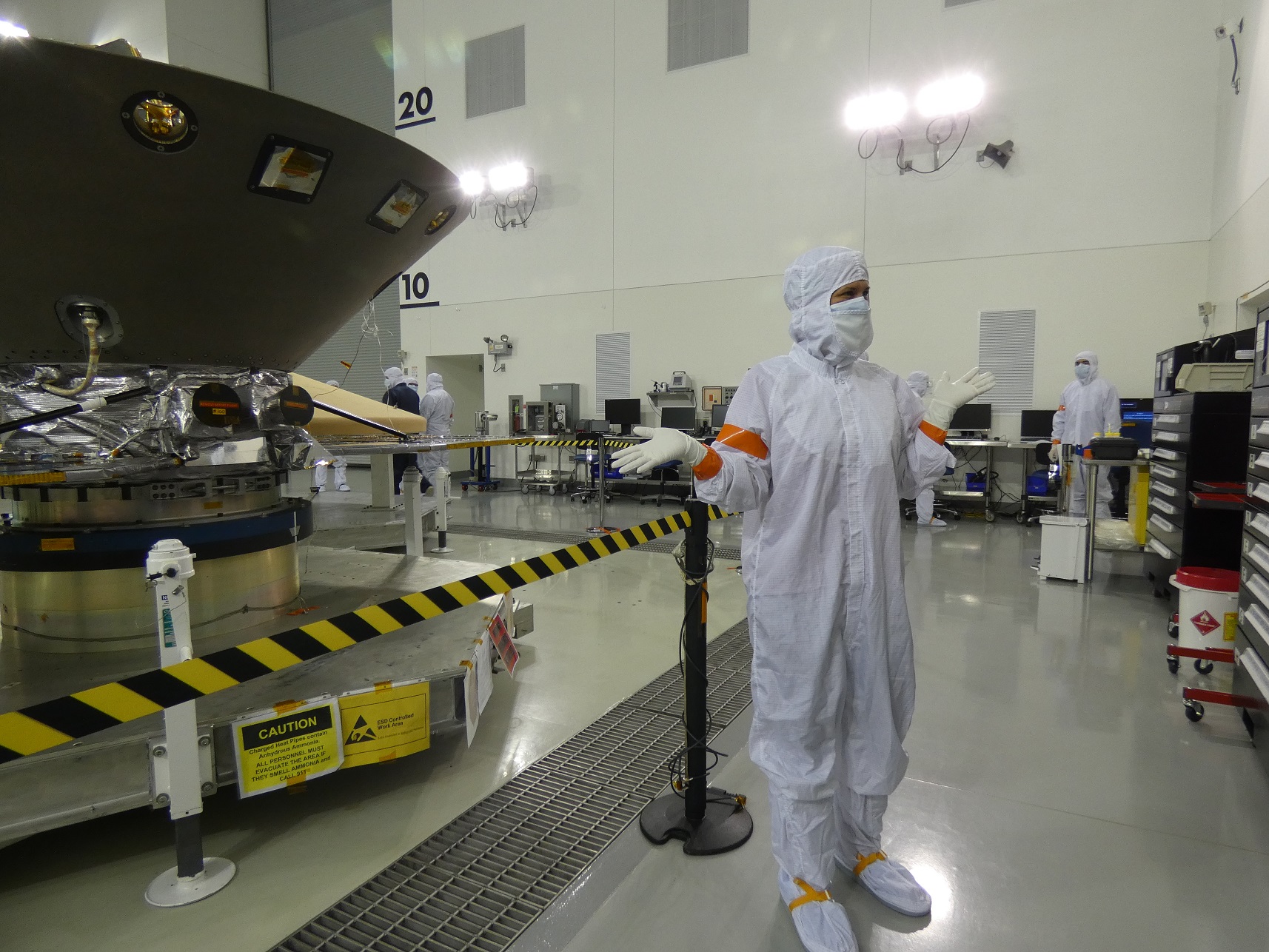 To protect against contaminating the spacecraft, everyone is wrapped in multi-layer protective garments before entering the clean room. Credit: Philip Sloss for NSF/L2.

To that end, everything and everyone that is allowed in the vicinity of the spacecraft is thoroughly cleaned, wrapped up in multiple layers of protective material, or both.

These protocols were also used while InSight was under assembly at Lockheed Martin’s Space Systems Waterton facility in Littleton, Colorado.

Assembly of the spacecraft was completed before its original launch opportunity in March, 2016; however, issues with a primary seismic instrument postponed the launch until the next opportunity, which opens in May. 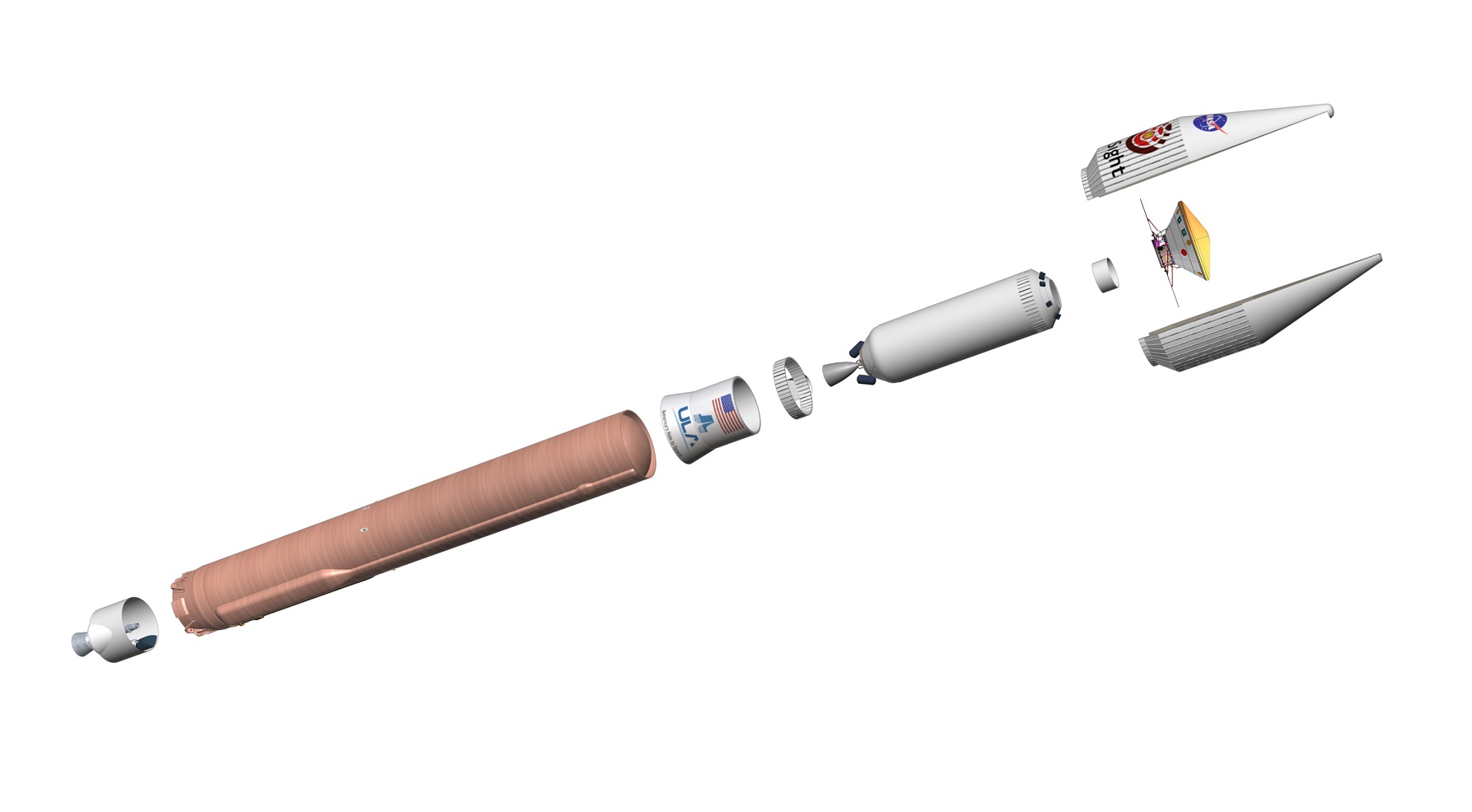 Once the spacecraft is mated to the rocket at the launch pad, the same anti-contamination protocols will be in place for any up-close access needed there.

“The pad has a clean room but in most cases the spacecraft is encapsulated in the fairing which is already clean and then there’s clean air that blows in and creates a positive pressure so contamination can’t get in,” Scott Messer, ULA’s NASA Program Manager, said.

In order to make the trip from Earth to the Martian surface, the InSight lander will make most of the trip flying inside an aeroshell attached to an interplanetary cruise stage. With the exception of the heat shield that forms half of the aeroshell, the spacecraft is fully assembled. 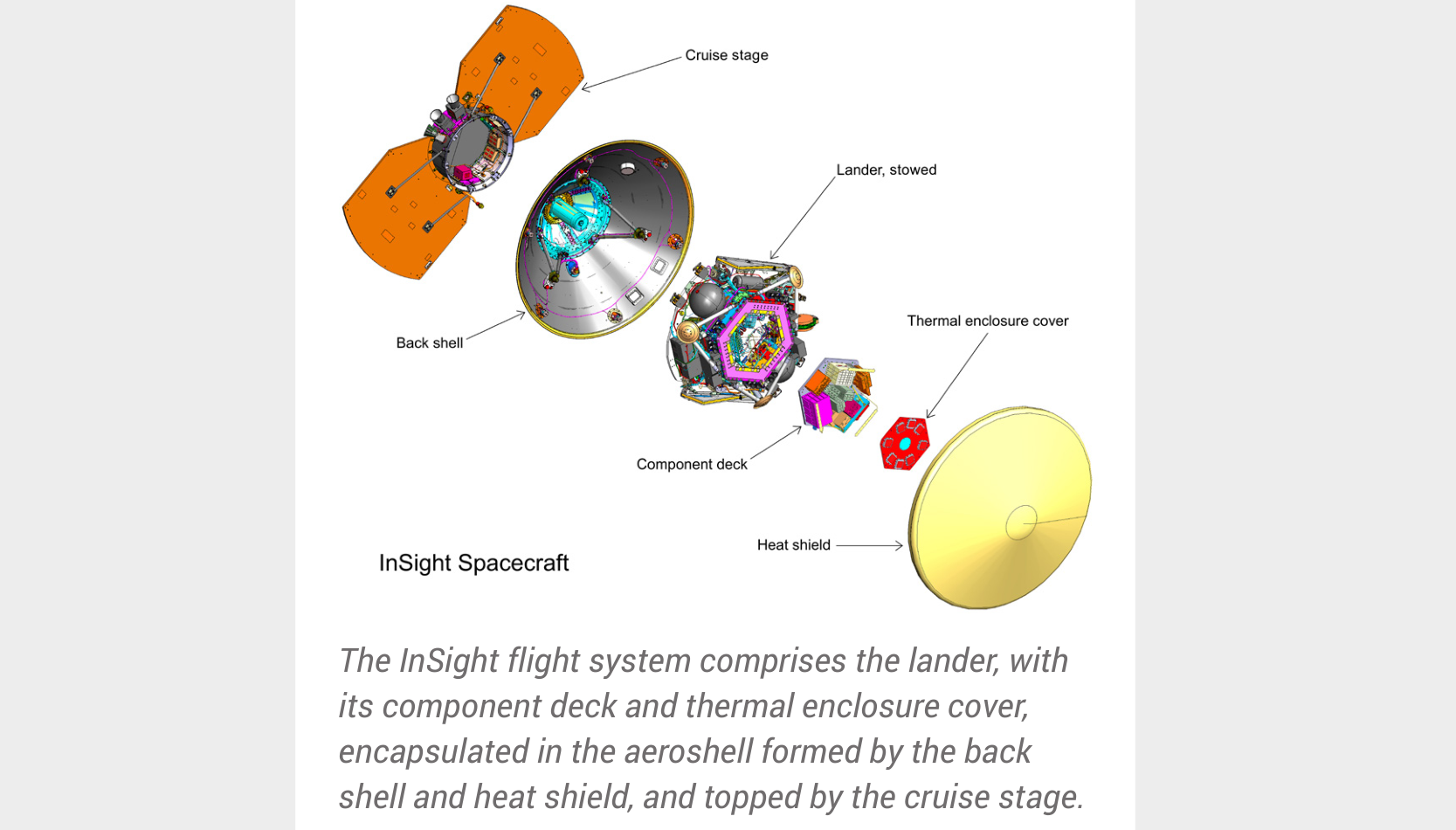 It made its second trip from Colorado to Vandenberg in late February; after reverifying its systems, spacecraft was packaged up again for in a protective container for ground and air transportation.

“It actually had the heatshield on it and we put it on its container base and then we have what’s called the birdcage that goes over that, which is another kind of protective frame with ESD (electrostatic discharge) plastic on it,” Billy Jones, Lockheed Martin spacecraft technician, noted.

“Then we put the container lid on, bolt that down with a hundred fasteners, and then, of course, it has its own temperature and environmental system on it when we’re transporting.” 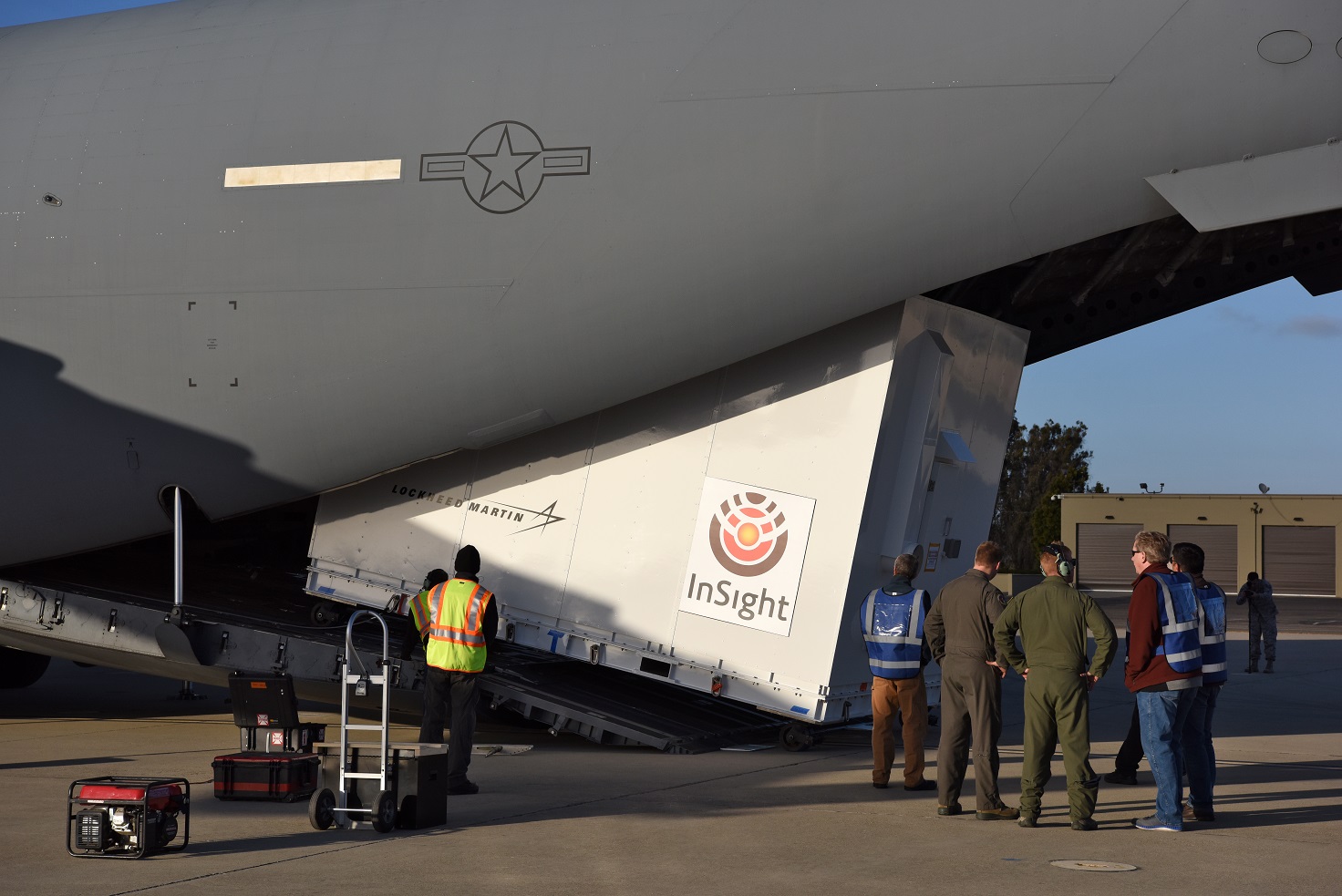 After being driven from Littleton to Buckley Air Force Base in Colorado, the spacecraft was loaded on a United States Air Force C-17 military transport aircraft and flown to Vandenberg on February 28.

After arrival, the container was towed from the airfield to Astrotech’s nearby facility, where it was taken out of the container and placed on a rotational fixture for some of the final preparations for launch.

“We cable up and power up the spacecraft for the first time after transport and we run a self check — [we] make sure all the systems are fine, nothing looks funny or anything happened during transportation,” Jones added. “That’s what we did and it passed with flying colors.”

“It used to be on a rotation fixture in here, so we could rotate it down,” he continued. “We had a little bit of work to do around the landing radar that’s facing up now.

“Then once we had it in this final configuration, we transported it to this dolly and then we tore down the rotation fixture because we won’t be needing it anymore and here it sits just waiting to go.” 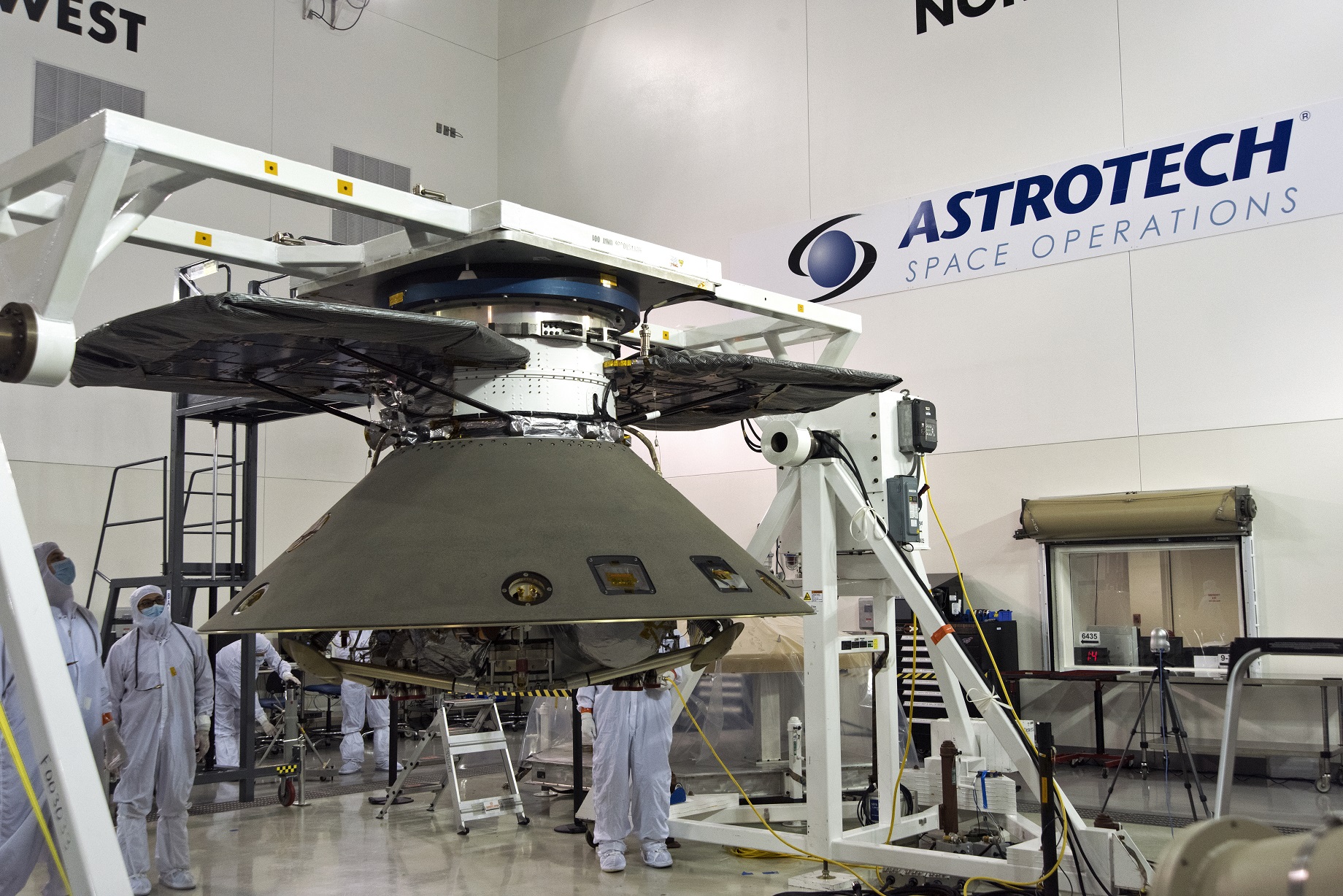 While still on the fixture, Jones noted that the lander and the cruise stage were fueled a few weeks ago. “That’s part of the reason we had it on the rotation fixture is we could angle the fill valves and latch valves where they exactly kind of wanted them because it was easier to get all the hoses and fittings in place and torqued on there,” he said.

“When you’re in a SCAPE suit it’s kind of bulky so you want to get everything out in the open as much as possible.”

The payload assembly is expected to be transported to SLC-3 on April 24; beginning this week, the spacecraft will begin the process of being encapsulated inside the aerodynamic payload fairing.

“We have a couple of ‘remove before flight’ items,” Jones said, referring to the last pre-encapsulation steps of removing non-flight protective hardware. Covers for the lander’s descent thrusters for the lander, the cruise stage thrusters, and the star trackers still need to be removed. 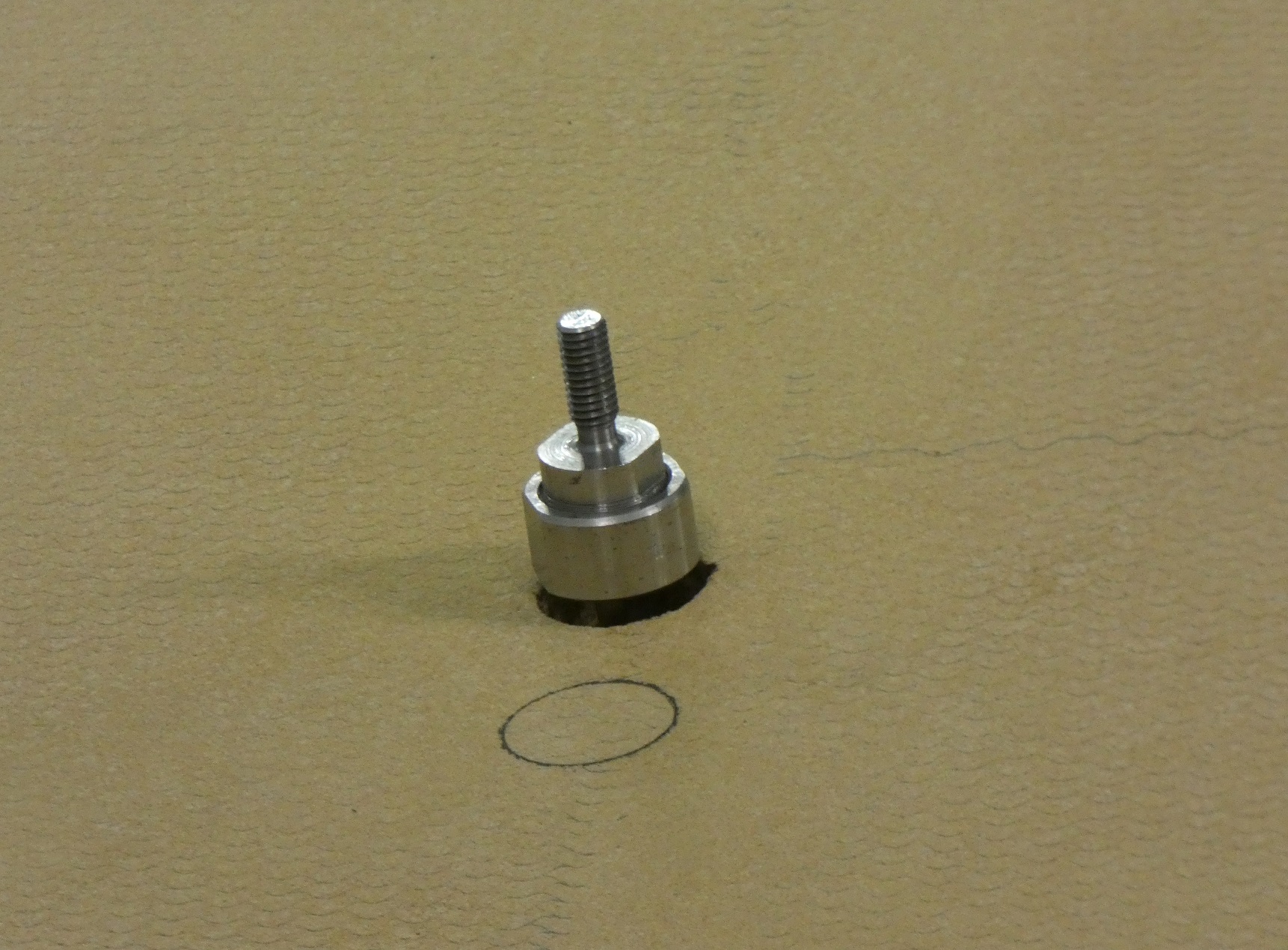 One of the three lift fittings on the heat shield. After the heat shield is attached, these will be removed and replaced with a Thermal Protection System (TPS) plug. Credit: Philip Sloss for NSF/L2.

At that point, the spacecraft is ready to start encapsulation. The payload adapter and payload fairing are currently waiting in the high bay next door at Astrotech.

“They’ll bring their PLA (Payload Adapter), what they call their PLA ring in here,” Jones said, referring to ULA. The PLA will be on another dolly. Minus the heatshield, the spacecraft will be lifted onto the PLA first.

“Then it’s pretty much put the heat shield on [and] bolt it up to all the sep fittings,” he continued. “And then take the lift fittings off and fill the little holes that we have the lift fittings bolted into right now with TPS (Thermal Protection System) plugs so obviously we don’t want any hot spots when we’re coming in.” 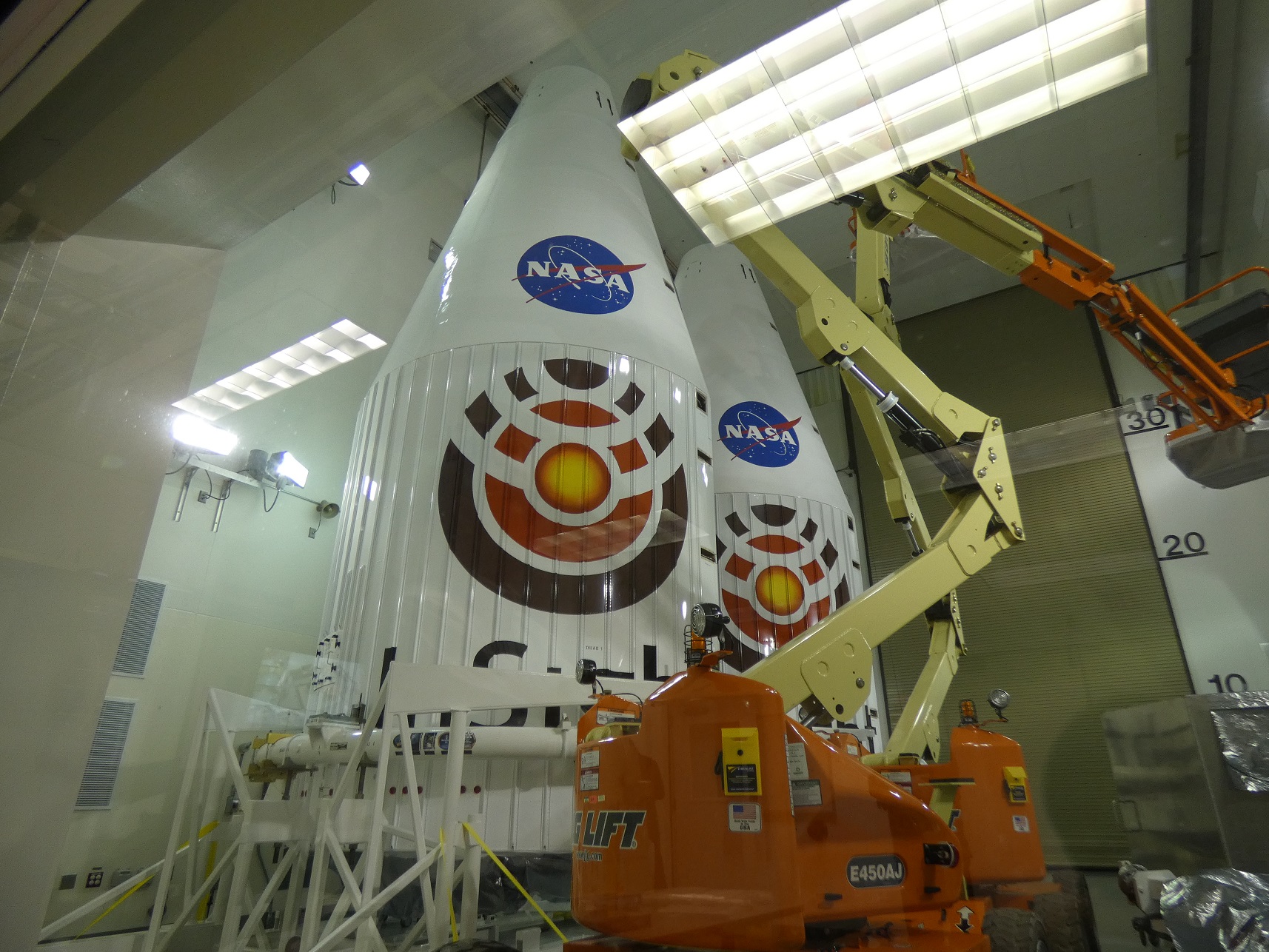 The halves of the payload fairing at Astrotech, April 6. Credit: Philip Sloss for NSF/L2.

Then the two halves of the payload fairing will be rolled into the high bay and put together around the spacecraft and adapter.

In parallel with final spacecraft preparations, ULA has assembled the mission’s Atlas V 401 launch vehicle on the pad at SLC-3. The Atlas booster stage was transported to the pad on March 2 and placed on the launch mount the next day.

The Centaur upper stage arrived at the pad and was stacked on top of the booster on March 6, followed by mating boattail that connects the Centaur to the payload fairing on March 8. 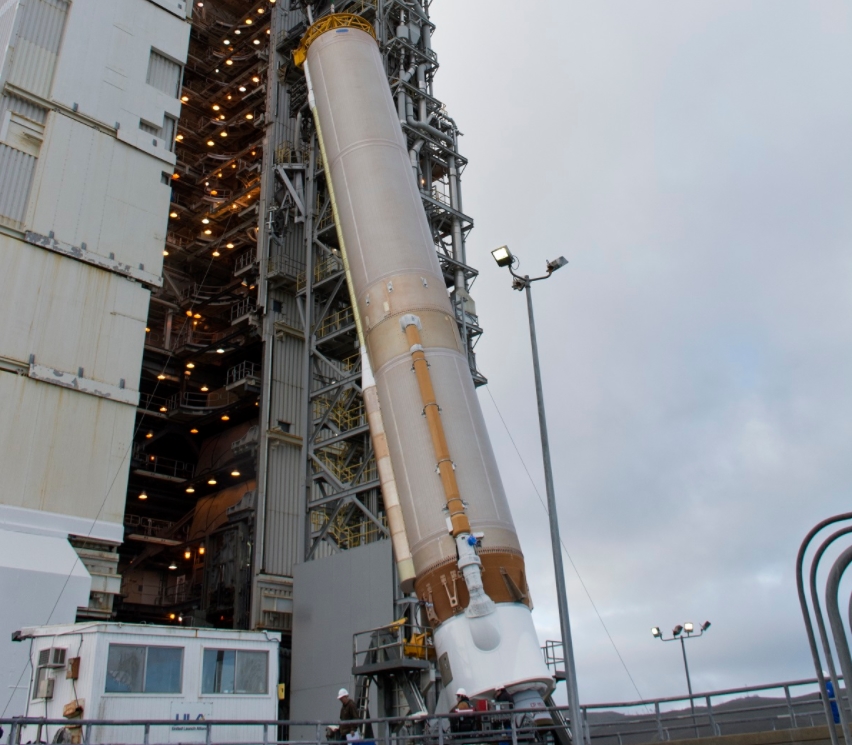 A Wet Dress Rehearsal (WDR), where the launch vehicle elements are fueled and taken through a test countdown sequence, was completed on March 22.

Due to their orbits around the Sun, opportunities to launch with the minimum energy necessary to get from Earth to Mars only occur every 26 months and only last for a few weeks. For launches of spacecraft like InSight that have short and infrequent opportunities, NASA typically requests “schedule mitigations” like a WDR in order to verify launch equipment and systems ahead of time.

In order to reduce the possibility of discovering technical problems while the planetary launch clock is ticking, tests like a WDR provide an opportunity to find and fix potential rocket and ground equipment problems before the short launch window opens. 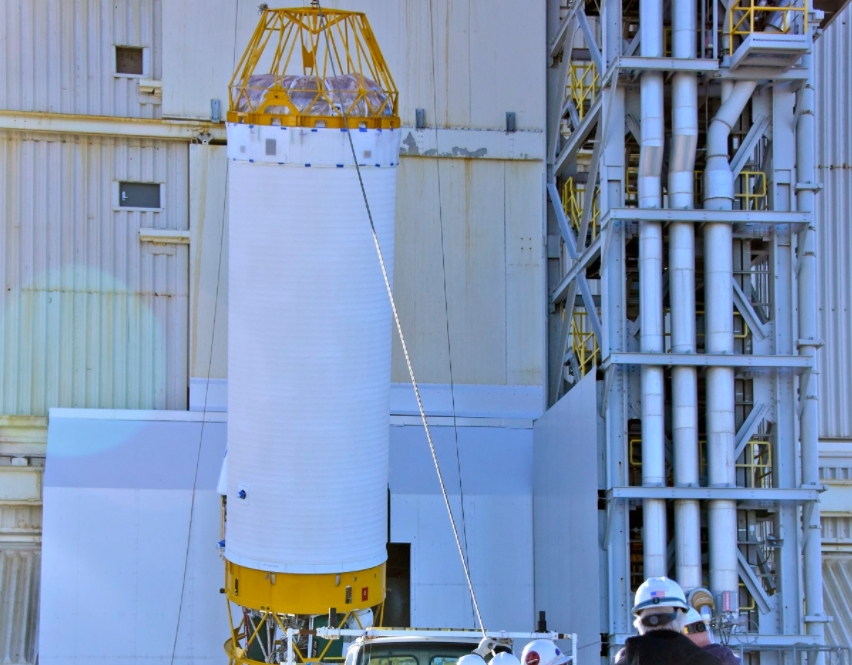 “The Wet Dress adds about two or three days to the overall launch campaign, so it’s not a lot but we do have to take that into account,” Messer noted. “[At] Vandenberg because don’t launch quite as frequently we still do a Wet Dress Rehearsal for every launch out here, and certainly for planetary [launches] to NASA requirements we do the wet dress.”

“There’s quite a bit of testing, both spacecraft as well as launch vehicle testing,” Messer said once the payload is mated to the rocket. “It’ll take two weeks from the time that we get it out there to the time when we launch.”

The InSight launch is the first planetary mission to fly from Vandenberg; all prior missions launched from the U.S. have launched from Florida, where the launch site reduces the required launch energy further. “It requires some additional performance obviously because you don’t get to take advantage of the rotation of the Earth from out here as well as you do down at the Cape,” he noted. 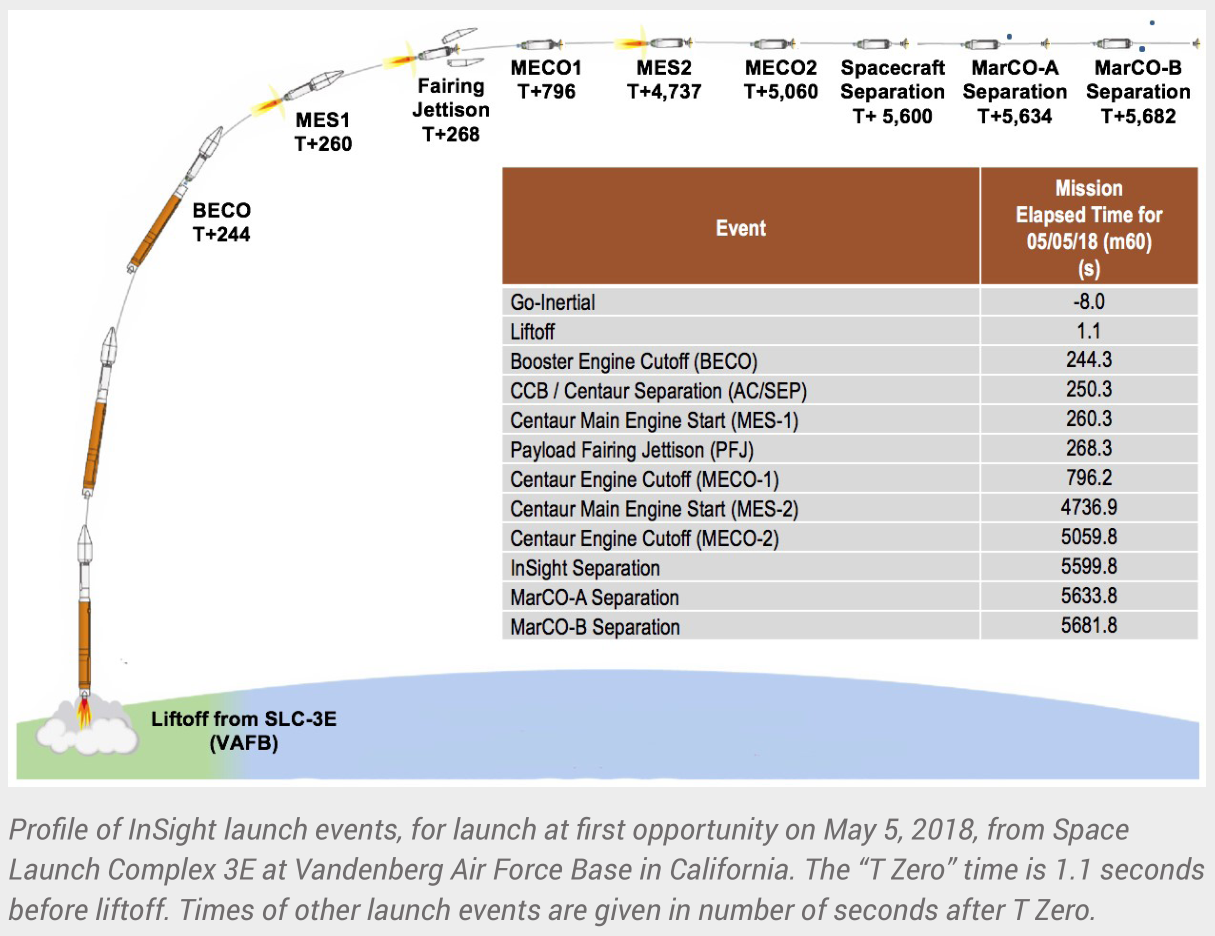 “So we take off, we do a little dogleg, we’ll fly down around South America, come up the east coast of Africa, then kind of up over Russia and then separate the payload just off the coast of Alaska.”

The first launch opportunity this year opens at 4:05 am Pacific Time (11:05 UTC) on May 5 and lasts for two hours. A two-hour launch window is available every day through June 8, opening a few minutes earlier each day. Regardless of launch day, arrival at Mars would be on November 26.