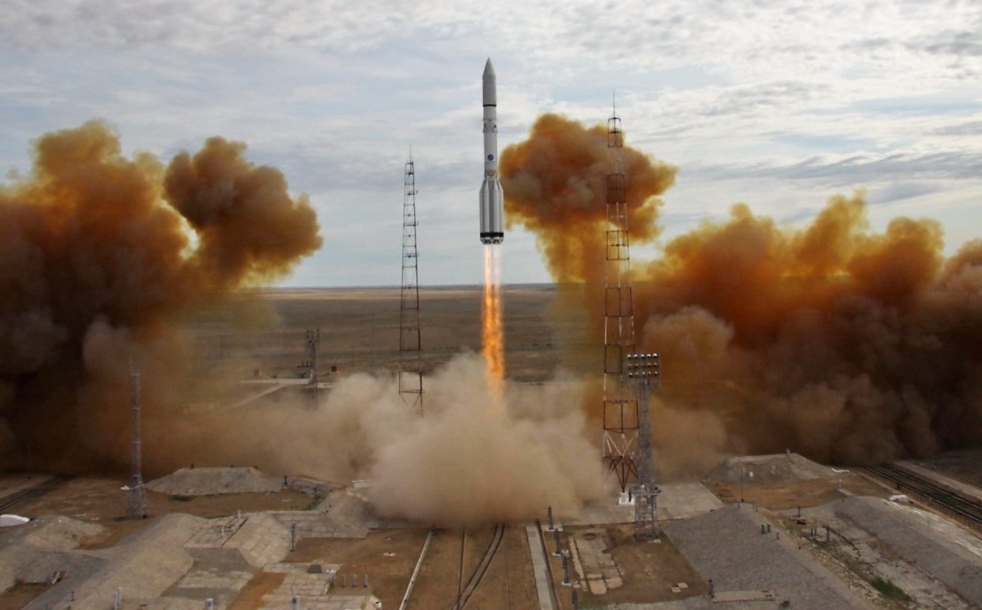 Russia’s Proton-M rocket made its first flight in six months Thursday, successfully deploying a Blagovest military communications satellite. Launch occurred from the Baikonur Cosmodrome in Kazakhstan at 04:12 local time (22:12 UTC on Wednesday), ahead of over nine hours of flight to deployment of its passenger.

Thursday’s launch carried the Blagovest No.12L satellite, the second spacecraft in a new series of communications satellites for Russia’s Ministry of Defence. After launch the satellite is likely to be renamed Kosmos 2526 under the designation scheme that Russia uses for its military spacecraft. Few details about the spacecraft have been made public.

Blagovest – meaning Good News – is a project that has been funded by the Russian military. Each satellite carries a payload of Ka and Q-band transponders. Although the satellites are being launched for the Ministry of Defence, they are reportedly equipped for telephony, broadcasting and internet services – which will support a dual-use mission with commercial service as well as linking Russia’s military bases.

The Blagovest spacecraft are built by ISS Reshetnev – the successor to the Soviet-era NPO PM design bureau that was headed by Mikhail Reshetnev. Blagovest is based around the Ekspress 2000 bus that has previously been used for the civilian Ekspress-AM5 and AM6 and Yamal 401 satellites. Once in orbit the satellite will deploy a pair of solar arrays to generate power. It is expected to remain in service for fifteen years.

The Blagovest constellation is expected to consist of at least four satellites in geostationary orbit. It will include spacecraft at longitudes of 45 and 128 degrees East – Kosmos 2520 operates at 45 degrees East.

Proton-M on a previous launch – via Roscosmos

Proton has served as a workhorse of the Russian – and previously Soviet – space programmes for many years. First developed in the 1960s, Proton was derived from Vladimir Chelomei’s Universal Rocket 500 (UR-500), a massive intercontinental ballistic missile designed to carry the Soviet Union’s heaviest nuclear warheads like the Tsar Bomba. While the two-stage UR-500 never flew as a missile, four were launched between 1965 and 1966 with N-4 scientific satellites – named Proton once in orbit. The rocket was named after these payloads.

With a modified second stage and a new third stage, the UR-500 became the Proton-K. This rocket allowed the USSR to deploy most of its heaviest satellites and – with the addition of the Blok-D family of upper stages – gave the country access to geostationary orbit and the ability to launch new and heavier missions to the Moon, Venus and Mars.

Proton-K was also to have launched the Soyuz 7K-L1 spacecraft – also known as Zond – on manned flybys of the Moon. The rocket’s maiden flight in March 1967 – using a four-stage vehicle with a Blok-D upper stage – carried an unmanned prototype. During its early years, Proton-K was extremely unreliable – recording eight launch failures from ten flights in 1969 – and this, combined with the resulting delays, led to the manned Lunar flybys being abandoned. The rocket’s reliability improved after a heavily-instrumented suborbital test launch in 1970 and the following year a three-stage Proton-K deployed Salyut 1, the first space station.

Proton-K rockets launched all of the space stations in the Salyut programme – both the civilian DOS and military Almaz vehicles. The Proton-K also deployed all modules of the later Mir space station except the Stykovochnyy Otsek docking module that was delivered by Space Shuttle Atlantis, and the Zarya and Zvezda modules of the International Space Station.

In the 1990s, Russia began offering commercial Proton launches through International Launch Services (ILS), a company which also marketed the American Atlas II rocket. ILS continues to fly commercial missions aboard Proton, however at a reduced rate in recent years as concerns have resurfaced about the vehicle’s reliability.

The Proton-M is a modernized version of the Proton-K which first flew in April 2001. Also incorporating upgraded engines, Proton-M increased the rocket’s payload capacity. It is typically paired with a Briz-M upper stage, which had been tested on two Proton-K launches prior to the Proton-M’s debut, and two more in 2003.

Briz-M is a storable-propellant upper stage with a detachable propellant tank, optimized for the long-duration missions required to reach geostationary orbit from the Baikonur Cosmodrome. Proton-M has also flown several missions with the older Blok DM-2 upper stage – deploying Glonass navigation satellites – and its successor, Blok DM-03. Proton-K was phased out for commercial launches by 2003 and made its final flight in 2012. 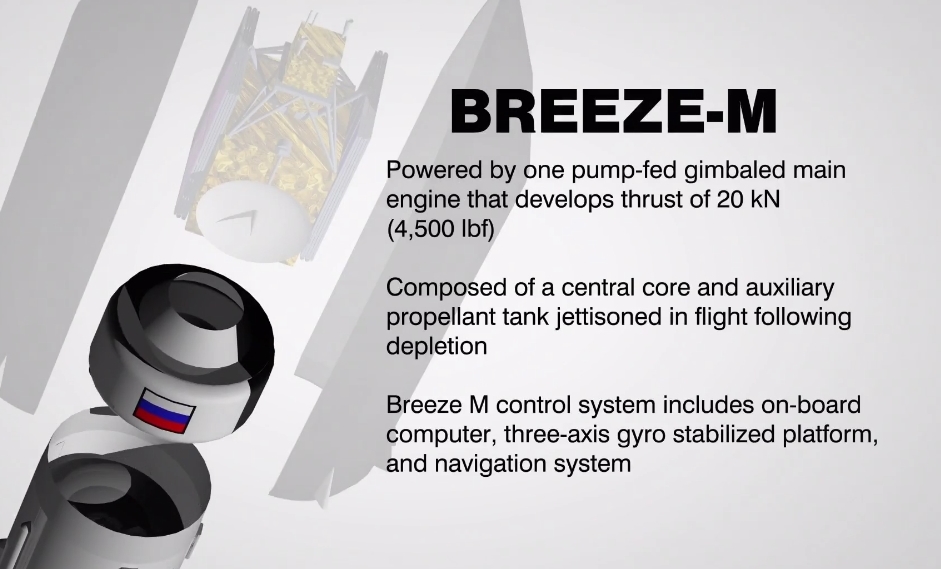 Between 2006 and 2015, most years saw a Proton launch failure – with none in 2009 but two in 2012 and 2014. Proton suffered another near-miss during June 2016’s launch of Intelsat 31 – when one of four second-stage engines failed nine seconds before the end of its planned burn. Although Intelsat 31 was deployed into its planned orbit – with the Briz-M fourth stage burning for longer than planned to make up the underperformance – the episode dented confidence in Proton. Combined with delays resulting from quality control issues with its engines, the rocket would remain grounded for almost a year – the longest time between launches in its history.

Proton-M returned to flight last June – two days before the anniversary of its previous launch – with the first of four missions launched last year. Protons also deployed the previous Blagovest satellite in August and two commercial satellites via separate launches in September.

Regardless of which pad they are launching from, Proton rockets are assembled horizontally with payload integration and Briz-M fuelling taking place before the rocket is rolled out and erected at the pad. Ahead of Thursday’s launch Proton-M was transported to Pad 24 on Sunday morning. 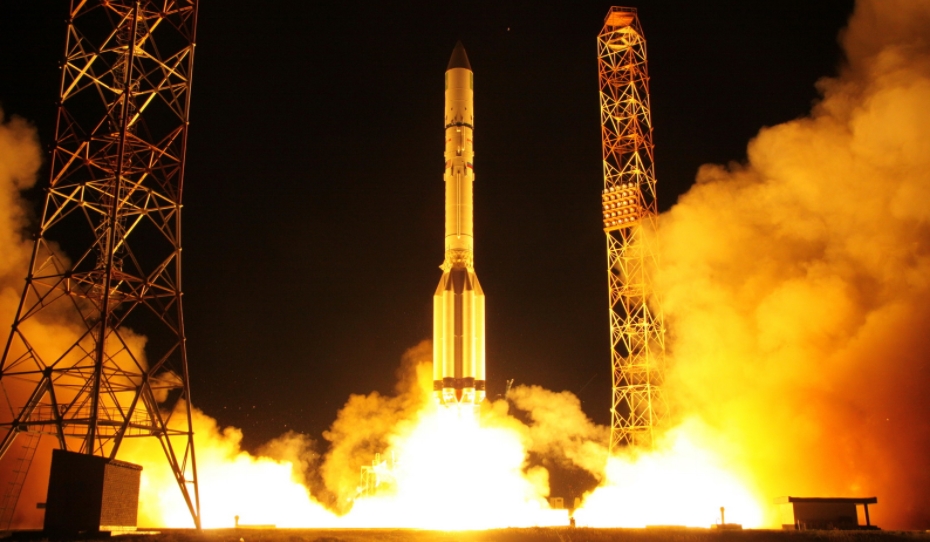 Proton uses storable hypergolic propellants – unsymmetrical dimethylhydrazine (UDMH) oxidized by dinitrogen tetroxide – which are toxic and environmentally hazardous. This has resulted in pressure from Kazakhstan on Russia to withdraw the rocket from use.

Russia’s new Angara rocket will eventually replace Proton; however, Proton launches are expected to continue for the foreseeable future. A new Proton Medium rocket – consisting of the rocket’s first two stages and a Briz-M – has recently been announced to provide cheaper launches for lighter payloads and incremental upgrades have been made to the Proton-M since its introduction.

Thursday’s launch was the 417th flight of Proton, and the 103rd to use a Proton-M.

To allow Proton to be transported by train, Chelomei designed its first stage with six propellant tanks clustered radially around a central oxidizer tank – with final integration taking place at Baikonur. The stage’s six RD-276 engines are located underneath the fuel tanks.

Two and a half seconds before its planned liftoff, Proton began the ignition sequence for its first stage engines, with ignition itself taking place three-quarters of a second later. The engines reached full thrust about nine-tenths of a second before launch.

After lifting off, Proton passed through max-Q – the area of maximum dynamic pressure – about a minute into the mission. Two minutes into flight, the first stage separation event took place. Proton’s second stage ignited before the first stage is jettisoned, with the exhaust gasses venting through the lattice interstage between the two.

Proton’s second stage is powered by four engines: three RD-0210s and an RD-0211. The two types of engine are essentially the same, with the RD-0211 including an additional gas generator to maintain pressure in the propellant tanks. The second stage burned for three minutes and 27 seconds.

At the end of second-stage flight, Proton’s third stage ignited. This is powered by an RD-0212 – comprising a main engine and a vernier engine for attitude control. The third stage burned for four minutes and 15 seconds. About twenty seconds into its burn, Proton’s payload fairing separated from the nose of the vehicle. 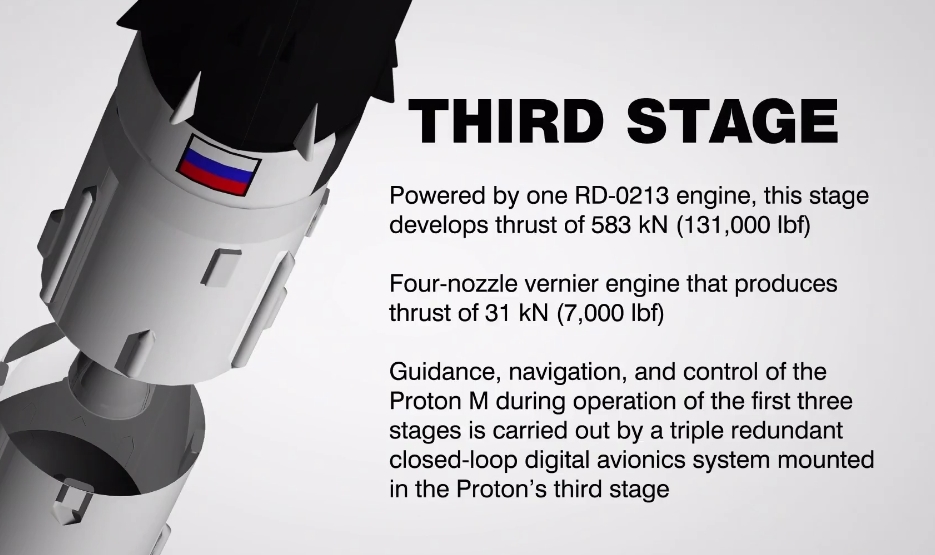 About nine minutes and 42 seconds after liftoff, Proton’s third stage completed its role in Thursday’s launch and handed over to the Briz-M. Within a minute and a half to two minutes of separating from the Proton, Briz-M began its first burn to reach an initial parking orbit. This burn lasted a little over four minutes. Briz-M made a series of four burns to inject its payload directly into geostationary orbit. Spacecraft separation took place around nine hours after launch.

The first Proton launch since last September, Thursday’s launch was the first of only three or four expected to take place in 2018. The only other Proton launches confirmed to be on schedule for 2018 are a commercial mission with Eutelsat 5 West B and Orbital ATK’s first Mission Extension Vehicle (MEV-1) – which is slated for no earlier than the third quarter of the year – and the deployment of an Elektro-L weather satellite for Roskosmos in October.

An additional military launch could occur later in the year. Planned launches of the Yamal 601 communications satellite and the Nauka module of the International Space Station were recently delayed until 2019.