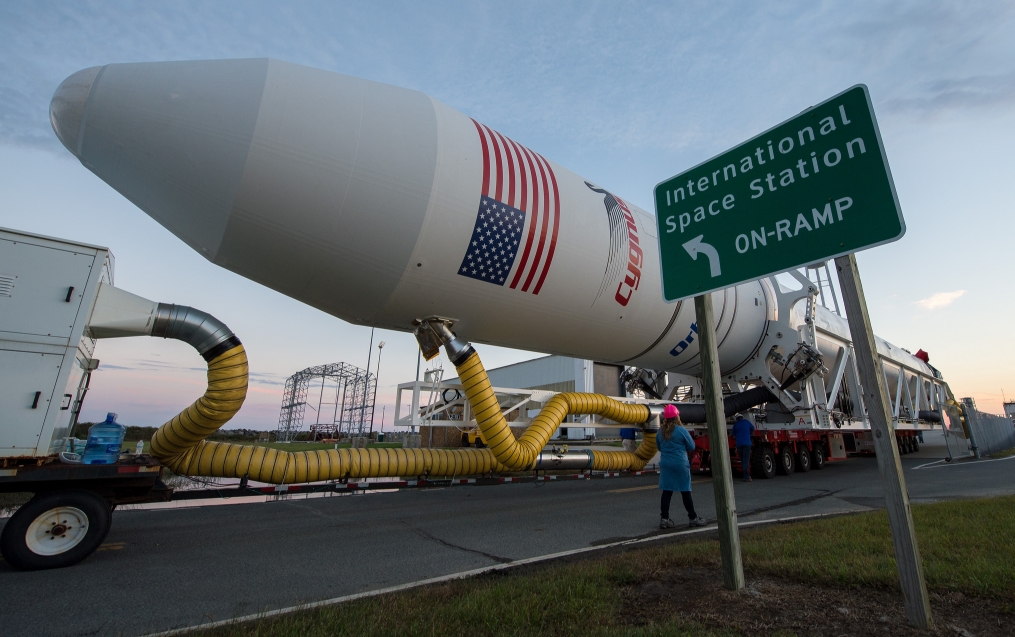 Orbital ATK has completed rollout of its Antares rocket tasked with launching the Cygnus OA-9E cargo and science resupply mission to the International Space Station.  Liftoff is targeted one day later than originally planned on Monday, 21 May 2018 at 04:39 EDT (08:39 UTC) from the Mid-Atlantic Regional Spaceport (MARS) on Wallops Island, Virginia.  As part of the launch campaign, the Range at MARS is undertaking new processes to alert the general aviation community in an attempt to prevent the fouling of the range during the short, 5-minute launch window.

Originally targeting launch on Sunday morning 20 May, Orbital ATK announced Friday that, in conjunction with NASA, the launch was being delayed by one day to allow for additional pre-launch inspections and to shift the launch to a day where more favorable weather conditions are expected.

The delay, which appears to have been in the works Thursday, did not prevent the on-time Thursday night into Friday morning rollout of Antares to the launch pad following the completion of a series of integration activities at the Mid-Atlantic Regional Spaceport.

About one month ago, all of the major components for the launch, including Antares and the two constituent components of Cygnus, we’re all present at the launch site following the shipment of the Cygnus service module from Dulles, Virginia.  This was followed about two weeks ago by an initial loading of cargo into Cygnus’ pressurized module.

Mission Update: In conjunction with NASA, we have moved the #OA9 launch to NET Monday, May 21st at 4:39 a.m. EDT to support further pre-launch inspections and more favorable weather conditions. See the full statement on our mission page https://t.co/dBDd191faj

The Cygnus pressurized module was then mated to the service module before the completed Cygnus, named J. R. Thompson, was transported into the Horizontal Integration Facility near launch Pad 0A at the Mid-Atlantic Regional Spaceport.  There, Cygnus was mated to the top of the Castor 30XL second stage of Antares on 9 May.

After that, further cargo loading of Cygnus began.  “We typically do our cargo loads in three separate loadings,” said Frank DeMauro, Vice President and General Manager, Advanced Programs Division, at Orbital ATK in an exclusive interview with NASASpaceflight’s Chris Gebhardt.  “One is the initial load, which is typically anywhere from 60 to 70% of the cargo, and that was done before the module was mated.

“[Once we’re on Antares], we do the the first late-load batch, which is basically most of the remaining cargo.  And then, right before we encapsulate in the fairing, we will put in the final cargo load, which is a lot of the really late-load, time-critical science experiments and powered payloads.”

Those final late-load items were secured within Cygnus on Tuesday, which then allowed the final encapsulation process to begin Wednesday night following closure and securing of the hatch on Cygnus – which if all goes to plan will not be opened again until Cygnus is safely berthed with the Space Station next week. 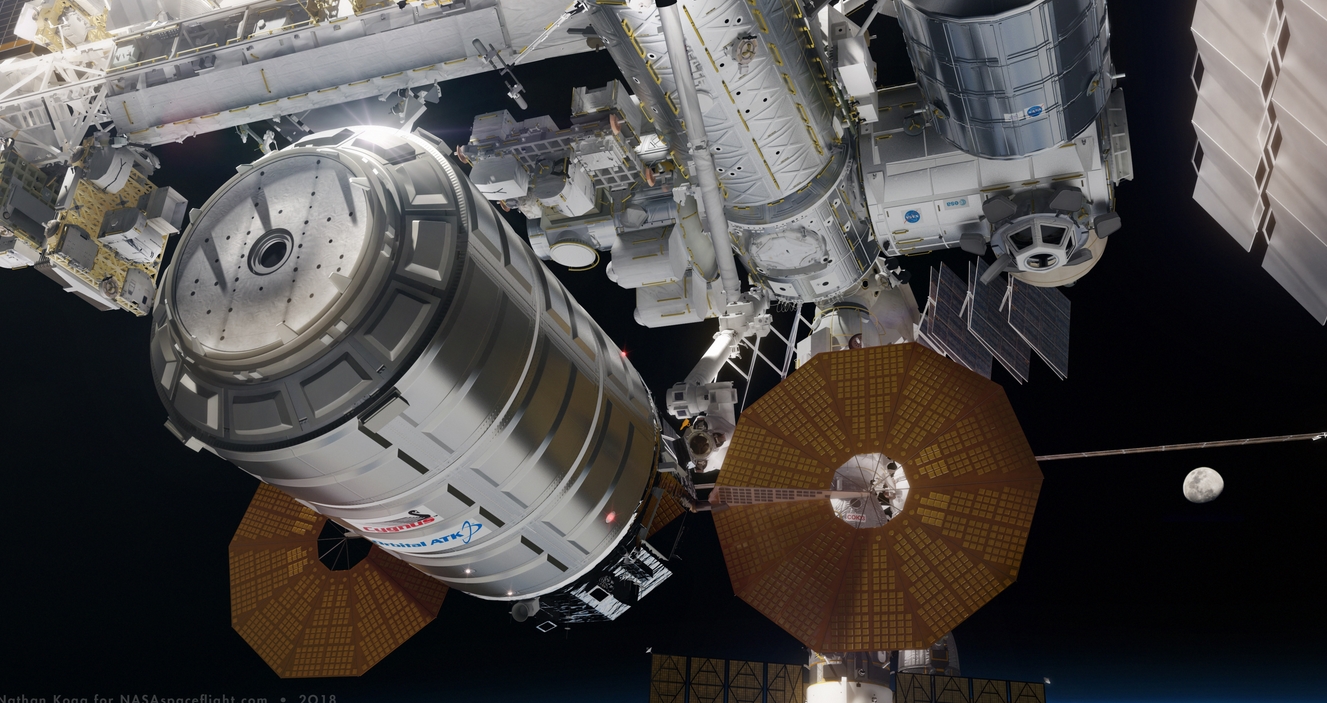 Cygnus holds position below the Station as Canadarm 2 reaches out for grappling in preparation for Cygnus to be berthed at Node 1 Nadir (Credit: Nathan Koga for NSF/L2)

Kurt Eberly, Vice President and Antares Program Manager for Orbital ATK, related in the same interview with Chris Gebhardt, “As soon as the Cygnus folks close up the hatch, our team swings into action and encapsulate the craft in the fairing.  The fairing is already mated together, and so we [just] slip it over Antares like you put on a sock. We’ve already had it mated [to Antares and over Cygnus] once to make sure everything was lined up right, and then we pulled it forward on the dolley” so late-load could occur.”

After the fairing is secured for launch, Orbital ATK and the Mid-Atlantic Regional Spaceport Range then conducted a flight termination system check to ensure that Antares is receiving the Range’s signals – the final major check before rollout to the launch pad.

Right on time and on schedule, Orbital ATK’s ground processing teams rolled Antares with an encapsulated Cygnus OA-9E spacecraft mated on top out to Pad 0A in the overnight hours of Thursday into Friday morning.

“At this point, we’re really in 24 hour operations,” said Mr. Eberly.  “We work to get mated up. The Transporter/Erector/Launcher has to get mated to the pivot blocks and the hydraulic pistons, and after that happens we connect up electrical and propellant lines.  Then we push up to vertical.”

Antares rolls out to Pad 0A at the Mid-Atlantic Regional Spaceport Thursday night. (Credit: NASA/Aubrey Gemignani)

Once vertical at the pad, Orbital ATK’s processing teams will conduct a brief power-on check that serves as the final major verification event: the combined systems test.  This will happen roughly 24 hours prior to launch. “There, we turn on everything we can on the rocket, on the payload, and we radiate to the Range and check interfaces to the pad and the commodity systems that control the fueling on the ground.  And so that’s a really big integrated test for us and gives us a lot of confidence going into the countdown.”

Once the Launch Readiness Review is complete, Orbital ATK teams will step into launch operations.  Based on the newly realigned launch time, teams will go on console at about 20:00 EDT Sunday night, 20 May (0200 UTC Monday, 21 May).  Management will come on console a few hours later at about 00:30 EDT (04:30 UTC).

“We do a bunch of electrical checks first and we start getting the pad systems ready, and then 90 minutes before launch is when we start loading propellant,” siad Mr. Eberly.  “We start with RP-1, then we pick up with LO2 (Liquid Oxygen). And we do them simultaneously, and that’ll finish about 15-20 minutes before launch. Then we’re kind of in a top-off mode on the LO2, and we just shut off the flow of RP-1.

“The autosequencer starts at T-3 minutes, and from there we really hand over control to the onboard flight computer that sequences all the operations that have to occur.  We continue to have humans in the loop, looking at data and so forth, and there are both manual and automated health checks that we perform.”

Per the countdown sequence for Antares, the vehicle’s two RD-181 engines light at T0, with the pad structure holding the vehicle down for a series of engine health checks before releasing Antares for flight, assuming no engine anomalies, 2.7 seconds after the count reaches zero.

New Range efforts to prevent incursions by ships and aircraft:

With the launch autosequence commencing at T-3 minutes, Orbital ATK has no ability to hold the count after that moment.  Any issue with Antares, Cygnus, or the Range after that point would result in a time-consuming recycle of all the vehicle and ground systems to the T-3 minute and holding mark.

Given that this mission is to the International Space Station and only has a 5-minute launch window, any issue necessitating a hold after T-3 minutes would result in a scrub of the launch attempt for the day as there would not be enough time to recycle the count and proceed to launch within the window.

While Antares and Cygnus generally behave quite well during this part of the count, the Range at the Mid-Atlantic Regional Spaceport has been a source of concern during the final minutes of count operations, as was seen during the last couple of Antares launches when ships at sea and aircraft fouled the Range in the final minutes of the count, forcing a scrub and recycle to another day.

We have confirmed that the aircraft that aborted today's launch attempt was a small aircraft flying at about 500ft approximately 6 miles offshore.

“If that were to happen again, it’d be a scrub,” said Mr. Eberly.  “But we’re working very hard to not have a scrub. We feel like the Wallops side have made some good improvements through their air surveillance and are improving the way they do their NOTAMs (Notice to Airmen) this time.

“And they’re reaching out to the community.  They’ve got posters at general aviation airports in the area to announce that there’s this launch at this time on this day and please don’t come down in the area because you’ll ruin it for everybody.

“So they’re trying to do more community outreach, and we appreciate their support in doing that.  They’ve also added some assets that are going to give them a better air surveillance picture. And they’ve made strides in the sea area as well, so they’ll actually have a number of surveillance craft in the water now.”

Regardless of the Range, Mr. Eberly has every confidence in the Antares 230 rocket, which has performed flawlessly on every single one of its flights to date.  In regards to the Antares used on the OA-8E mission in November 2017, Mr. Eberly stated, “The performance was excellent. There were really no flight anomalies that our engineers found from the data.

“We did notice some moisture in the fairing.  There was some rain that we experienced upon rollout on OA-8E, so we’ve done some upgrades in terms of weather stripping, and we also have a new tarp that’s going to go over the fairing during rollout.” 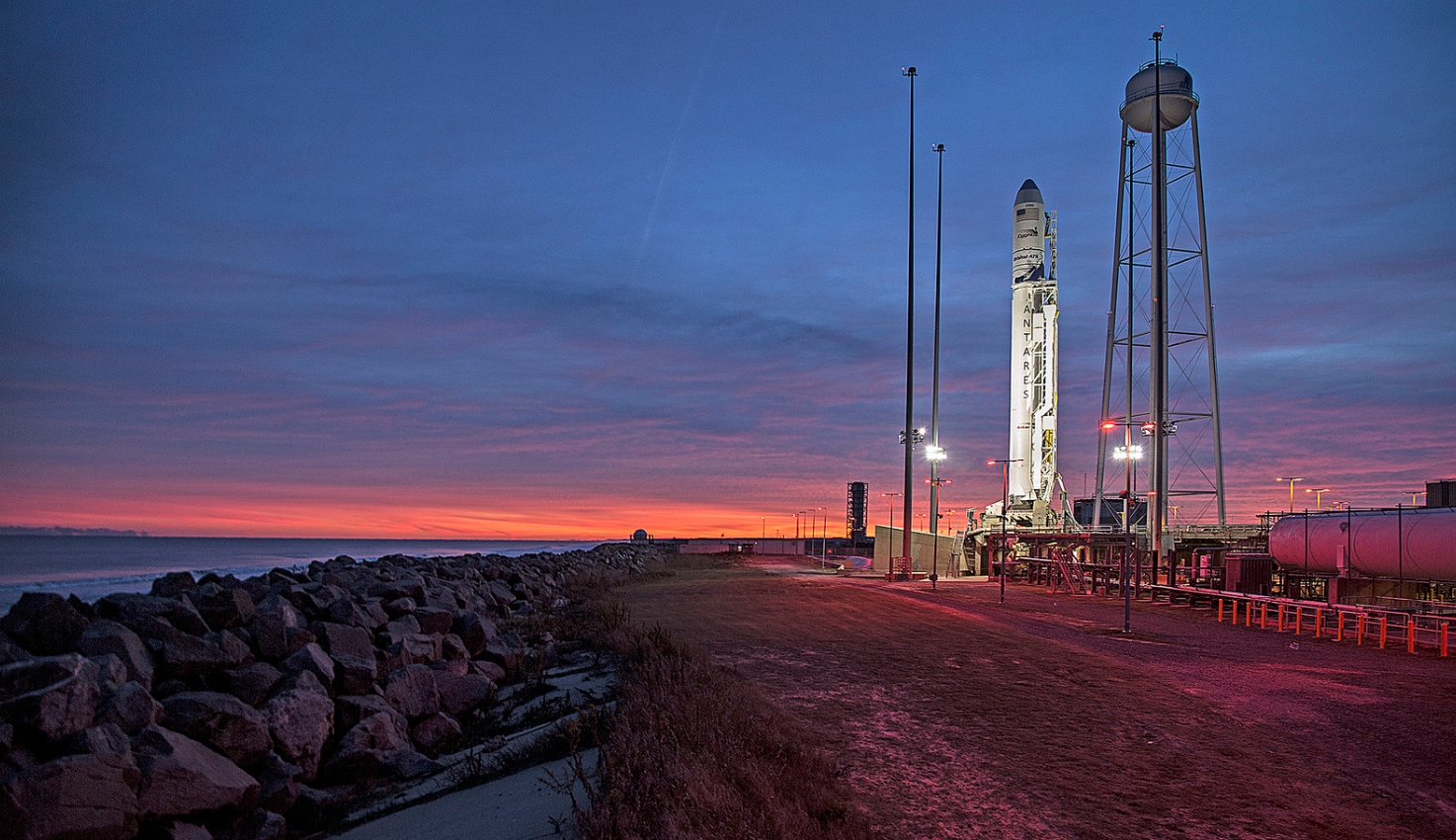 An Antares 230 awaits launch as the sun begins to rise at the Mid-Atlantic Regional Spaceport. (Credit: Orbital ATK).

More specifically, Mr. Eberly stated that Antares’ performance on the 0A-8E mission met all of the vehicle’s flight performance requirements.  “The orbit was a little higher than nominal, but within all requirements. We’re banking some of that extra performance that we’ve seen with the Castor 30XL second stage as well as the RD-181 engines on the first stage.  They’re within spec but a little bit over where we had the nominal mean.

“But all looked really good from OA-8E, and there was very little to do for preparation for OA-9E that’s different.  In fact, we’re flying essentially the same trajectory, same payload mass. It’s within 20 kg (44 lb) the same payload mass.  So that helps us a lot in terms of our planning and our model validation.”