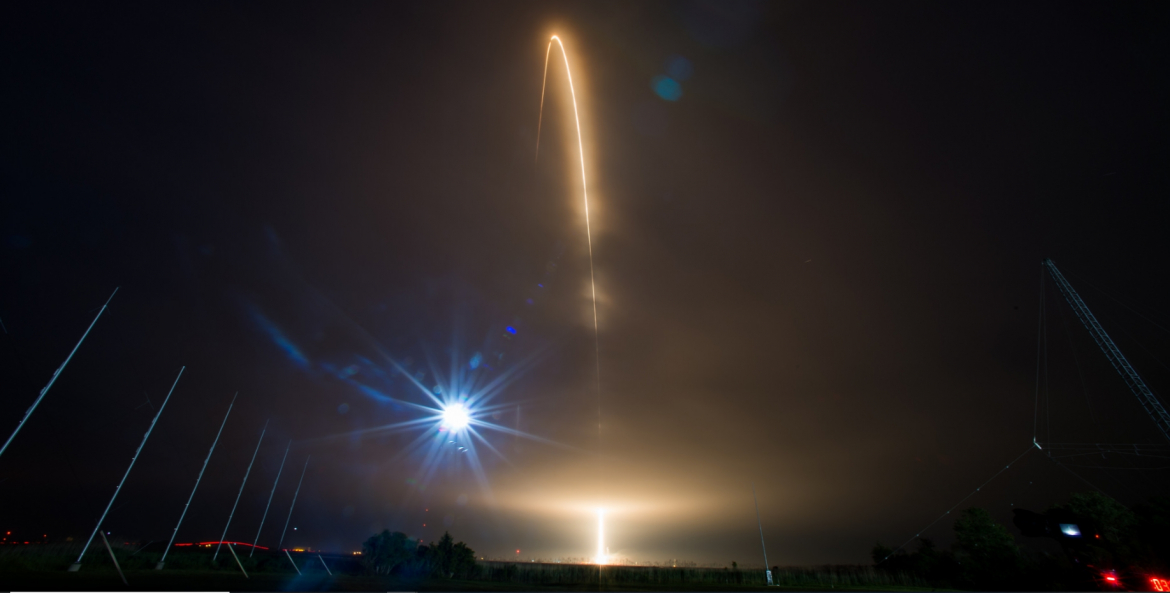 Brown University’s EQUISat mission uses a single-unit CubeSat that was assembled for about five thousand dollars to conduct a public outreach and technology demonstration mission. The spacecraft is equipped with an array of high-power LEDs that should emit a light visible to the naked eye from the ground. The satellite will also validate the use of lithium-iron-phosphate batteries in space for the first time and carries a radio system that will broadcast its status and orientation to amateur radio operators.

HaloSat is a six-unit CubeSat that is being flown for the University of Iowa. It carries an X-ray astronomy payload, consisting of three off-the-shelf XR-100SDD silicon drift detectors each mounted in an assembly with an x-ray collimator, an anti-coincidence shield and supporting electronics. These instruments will be used to study the distribution of hot gas within the Milky Way galaxy, and determine whether the galaxy has an extended halo of these gases.

Rowan University’s Memristor Satellite, or MemSat, is a one-unit CubeSat that will compare the performance of memristor-based storage devices to more traditional silicon-based devices in the space environment. Memristors can retain their state without power, which could result in more energy-efficient spacecraft and the ability to retain data in the event of a power failure.

The Radiation Satellite g (RadSat-g) mission will use a three-unit CubeSat to demonstrate the mission-readiness of a radiation-tolerant computer system based around commercial off-the-shelf components. The satellite also carries detectors to monitor its exposure to radiation. The mission is being conducted by Montana State University.

NASA’s RainCube is a six-unit CubeSat built by the Jet Propulsion Laboratory which will test a miniaturized Ka-band radar payload, validating the radar hardware and the concept of using a CubeSat to carry a radar payload. If successful, RainCube will pave the way for future atmospheric or weather research CubeSats carrying radar payloads.

The Temporal Experiment for Storms and Tropical Systems – Demonstrator (TEMPEST-D) is another six-unit CubeSat. Developed by Colorado State University in conjunction with NASA’s Jet Propulsion Laboratory, the spacecraft is a risk-reduction mission ahead of a planned six-satellite constellation that will provide real-time data on cloud cover and precipitation worldwide. 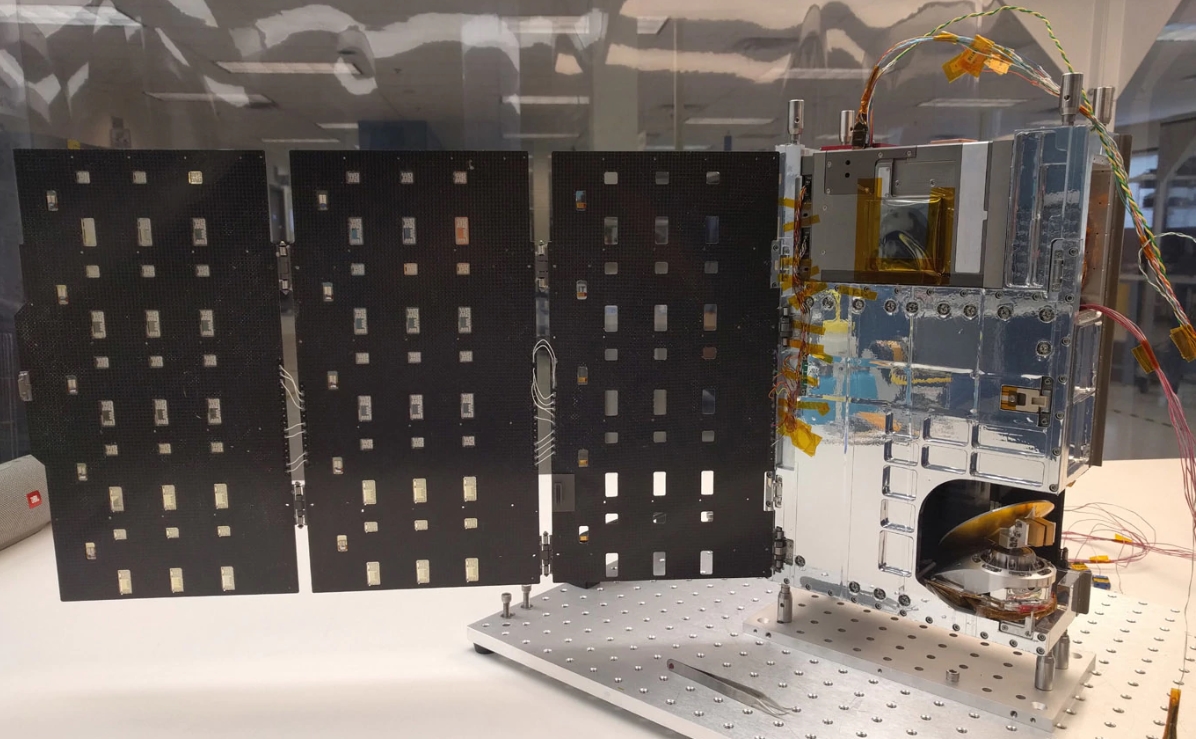 The spacecraft is equipped with two instruments – the High-Frequency Airborne Microwave and Millimetre-Wave Radiometer (HAMMR) and a second radiometer based on one developed by JPL for the RACE CubeSat – a University of Texas mission lost in Cygnus’ 2014 launch failure.

Two more CubeSats are being carried under commercial agreements with NanoRacks. EnduroSat One was developed by the Bulgarian Federation of Radio Amateurs (BFRA), in partnership with the international Space Challenges Program, which aims to promote and assist educational nanosatellite ventures. EnduroSat One is a single-unit CubeSat that carries two telemetry beacons for amateur radio operators to receive. Bulgarian universities will use the satellite to teach students the principles of satellite communications.

The six satellites that will be deployed from the Cygnus itself are all three-unit CubeSats. Four are Lemur-2 spacecraft that are being flown for Spire Global.

Each Lemur carries two payloads: SENSE collects the Automatic Identification System (AIS) signals from ships and Automatic Dependent Surveillance Broadcast (ADS-B) signals from aircraft, relaying them back to ground stations to help improve maritime and aviation safety in areas that would not normally be monitored. A second payload, STRATOS. measures how signals from GPS satellites are affected as they pass through Earth’s atmosphere – allowing the satellite to infer atmospheric conditions including temperature, pressure and humidity.

The other two CubeSats that will deploy from Cygnus after it leaves the International Space Station comprise the dual-satellite AeroCube 12 mission for The Aerospace Corporation. AeroCube 12A and AeroCube 12B will test new components in orbit, including star-trackers and solar cells. AeroCube 12B also carries an experimental electric propulsion system that will be demonstrated on orbit.

Orbital ATK’s Antares rocket boosted Cygnus into orbit. A two-stage rocket, Antares was developed to launch Cygnus, although it is also available for other missions if contracted. 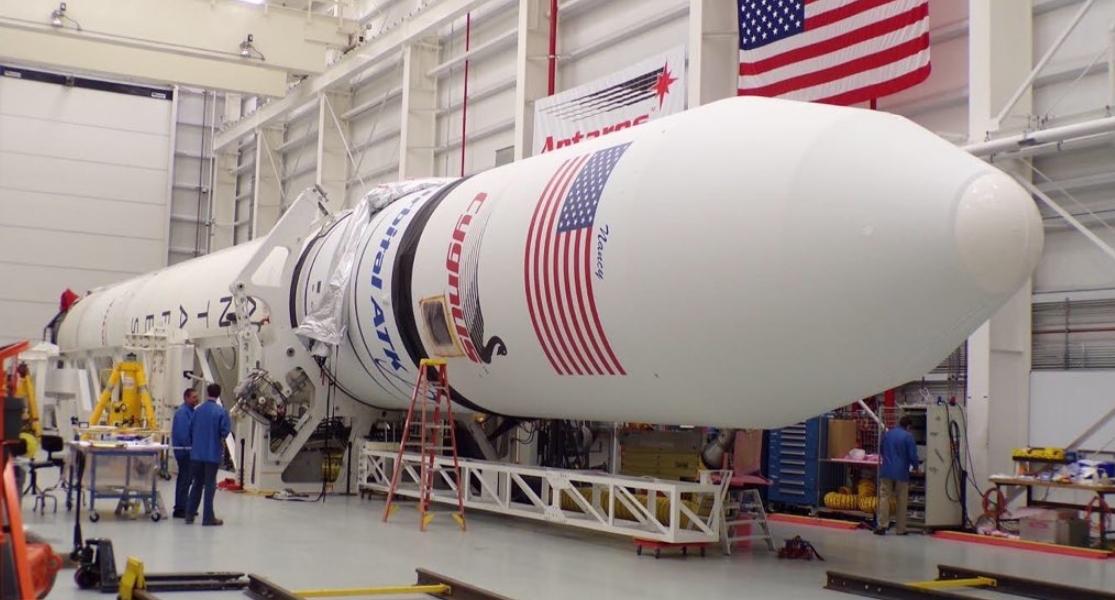 The rocket has a liquid-fuelled first stage and a solid-fuelled second stage. Antares first flew in April 2013 carrying a Cygnus mass simulator and four CubeSats. Subsequent missions have all carried Cygnus spacecraft.

Monday’s launch was the eighth flight of Antares, which has completed six of its seven previous missions successfully. Its only failure occurred during the fifth launch, in October 2014, when a turbopump in one of the rocket’s first stage engines failed fifteen seconds after liftoff, with the rocket falling back onto the launch pad and exploding. Antares returned to flight two years later in an upgraded configuration with RD-181 engines in place of the AJ-26s that had been used previously.

The first stage of Antares was designed by Ukraine’s Yuzhnoye design bureau and constructed by Yuzhmash. It is based on the first stage of the Zenit rocket that was developed by the two companies for the Soviet Union in the 1970s. The rocket’s second stage is a Castor rocket motor that was originally built by  Alliant Techsystems – now a part of Orbital ATK.

The Antares that launched Monday’s mission flew in the 230 configuration, consisting of the RD-181-powered first stage and a Castor-30XL upper stage. The third digit of the configuration number is reserved for a third stage; however this is not required for a Cygnus mission and to date no Antares has flown in a three-stage configuration.

Antares launches take place from Launch Pad 0A (LP-0A) at the Mid-Atlantic Regional Spaceport on Wallops Island, Virginia. The Antares complex was built ahead of the rocket’s maiden flight, on the site of a pad that had previously been used for the single launch of Space Services Incorporated’s Conestoga 1620 rocket – which ended in failure in 1995. Antares is assembled horizontally and then transported and erected at the launch pad. Ahead of Monday’s launch, Antares was rolled out overnight Thursday into Friday.

Following a nominal countdown, Monday’s launch began with ignition of the rocket’s two RD-181 main engines once the count reaches zero. The RD-181, built by Russia’s NPO Energomash, is a single-chamber version of the twin-chamber RD-180 used on Atlas V, which itself is derived from the RD-170 and RD-171 flown on the Zenit rocket. The engines built up to full thrust while the rocket’s onboard computers check their health. Antares was then released with liftoff occurring at T+2.7 seconds.

Antares’ first stage burned for about three minutes and 35 seconds. Six seconds after burnout, the first stage separated and Antares’ payload fairing separated from around Cygnus, with the second stage separating from the interstage five seconds after fairing separation. Eight seconds later the second stage ignited for its two-minute, 42-second burn. 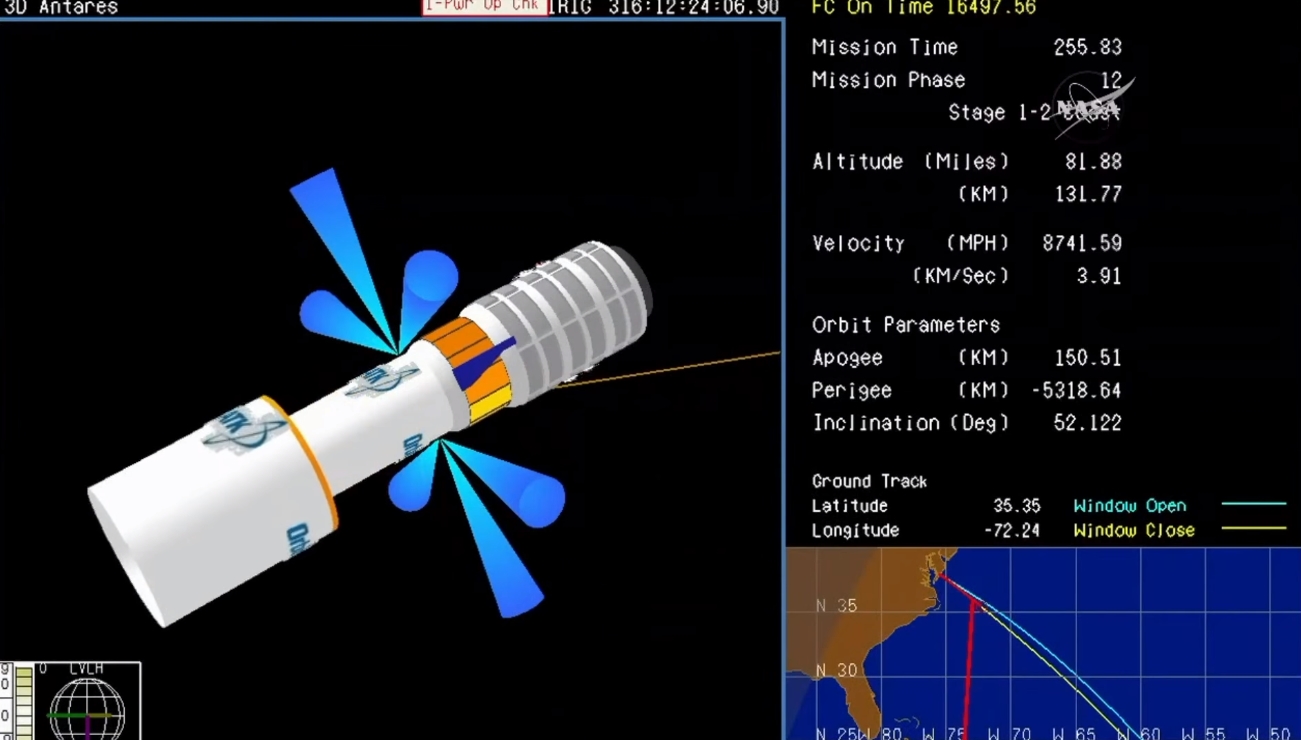 About two minutes after the second stage burns out – or at around nine minutes, five seconds mission elapsed time, the SS J.R. Thompson separated from Antares’ second stage to begin its mission. The initial deployment orbit is below the International Space Station, so after deploying its solar panels, Cygnus will make a series of burns over the next few days to set up its arrival at the space station.

Cygnus is expected to reach the International Space Station on Thursday. After completing its rendezvous with the outpost, the SS J.R. Thompson will approach to within range of the CanadArm2 robotic arm. The arm, under the control of NASA astronaut Scott Tingle, assisted by Ricky Arnold, will be used to capture Cygnus and position it for berthing at the nadir (Earth-facing) port of the Unity module. Following berthing, hatches between Cygnus and Unity will be opened, allowing the astronauts to unload the spacecraft’s cargo and replace it with trash to be disposed of.

The berthing of OA-9 will be the first to use the new Common Communications for Visiting Vehicles (C2V2) system aboard the ISS. This system, which allows Cygnus to transmit telemetry directly to the space station and to receive commands from the crew – such as an instruction to aboard rendezvous if necessary – was due to be used by Cygnus for its CRS2 missions, in place of the Japanese PROX-PLS system that had previously been used by Cygnus. Orbital ATK has decided to start using the new system from OA-9 onwards, instead of waiting for CRS2, with this mission allowing the system to be demonstrated in operation. 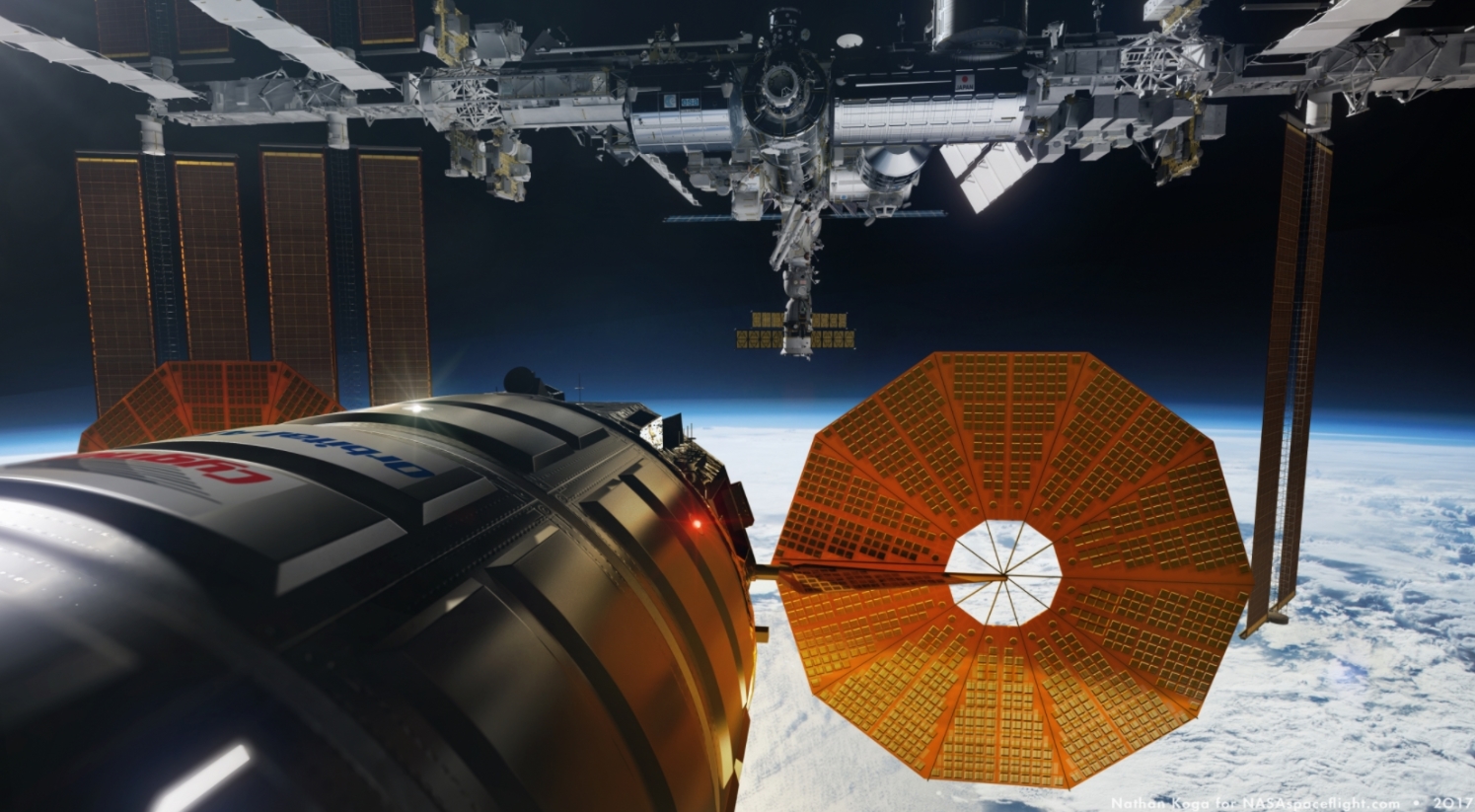 The SS J.R. Thompson is expected to remain berthed to the station until 15 July – when it will be unberthed using CanadArm2 and released to begin the free-flight part of its mission. Although the spacecraft does not have any science objectives for the free-flight phase – like the Saffire experiments performed on earlier missions – the spacecraft is still expected to remain in orbit for up to two weeks after it departs the ISS. During this time Cygnus will maneuver to a slightly higher orbit and release its six CubeSats. The mission will conclude in late July with Cygnus being deorbited to burn up on reentry over the Pacific Ocean.

Monday’s launch was the first of at least three that Orbital ATK has planned for 2018. The company’s next launch is planned for 14 June, with the air-launched Pegasus-XL rocket deploying NASA’s ICON ionospheric research satellite. The next Cygnus mission, OA-10, is scheduled for launch aboard Antares in November. Orbital ATK may also launch a Minotaur I towards the end of the year, with the National Reconnaissance Office’s NROL-111 payload, however a date for this launch has not yet been announced.

Falcon 9 launches Iridium NEXT 6 and GRACE-FO