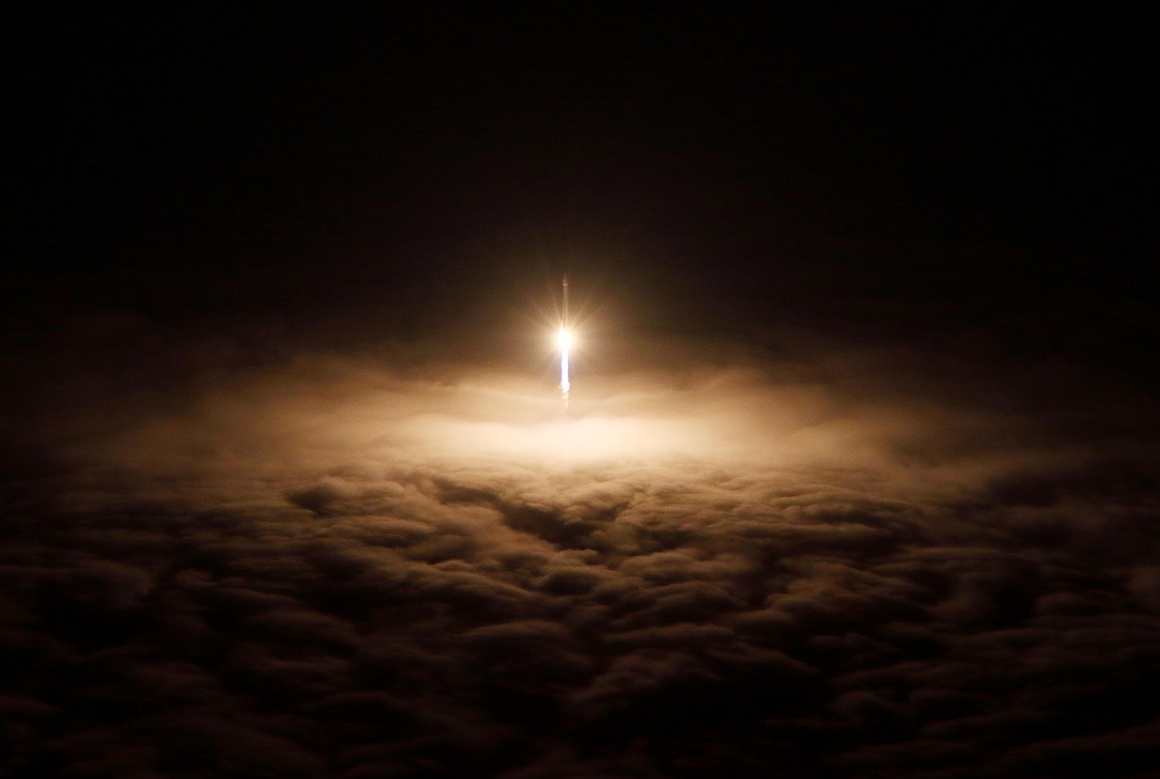 NASA has selected United Launch Alliance’s Atlas V rocket to carry InSight on the first leg of its journey to Mars. A workhorse of the US space program, Atlas V is a two-stage rocket consisting of a Common Core Booster (CCB) first stage and a Centaur upper stage. Atlas can fly with up to five solid rocket boosters (SRBs) strapped to the first stage, however for Saturday’s launch the rocket will fly in its lightest configuration, 401, which does not include any SRBs.

The three digits of this configuration number – 401 – indicate the diameter of the rocket’s payload fairing, the number of solid rocket boosters and the number of engines on the upper stage. The Atlas V that performed Saturday’s mission had the tail number AV-078 – which has also been named Marvin after the Looney Tunes cartoon character Marvin the Martian.

The InSight mission was originally scheduled for launch in March 2016 but missed its launch opportunity after a fault was discovered in one of its primary instruments that could not be resolved in time. Opportunities to launch to Mars without expending excessive amounts of energy are limited by the alignment of the planets – with minimum-energy windows occurring every 780 days. InSight is the only mission expected to launch during this year’s opportunity.

InSight atop of the Atlas V – via ULA

Although AV-078 was InSight’s ride into orbit on Saturday, the role was originally to have been filled by AV-062. Also using the 401 configuration, AV-062 was integrated at Space Launch Complex 3E ahead of InSight’s planned 2016 launch date. After InSight was delayed, AV-062 was reassigned to the commercial launch of DigitalGlobe’s WorldView-4 satellite and launched in November 2016 – following a scrubbed attempt in September and a two-month delay due to brush fires around the launch site. AV-062 performed the WorldView-4 mission successfully, maintaining Atlas’ enviable record of launch successes.

The Atlas V was developed by Lockheed Martin under the US Air Force’s Evolved Expendable Launch Vehicle (EELV) program, alongside Boeing’s Delta IV. Both rockets made their maiden flights in 2002, with Atlas V’s taking place on 21 August carrying Eutelsat’s Hot Bird 6 communications satellite. Saturday’s launch is the seventy-eighth flight of an Atlas V.

To date, despite some near-misses including a partial failure back in 2007, Atlas V has never lost a mission. Its predecessors, Atlas II and Atlas III both retired with flawless records of sixty-three and six launches respectively. Aside from the 2007 incident – which saw a pair of National Reconnaissance Office ocean-surveillance satellites placed into an off-target orbit, the last failure of an Atlas rocket was over twenty-five years ago – in March 1993 – when an Atlas I put the US Navy’s first UHF Follow-On satellite into a low orbit, which could not be corrected, after the rocket’s first stage underperformed.

Since December 2006, Atlas V has been built and operated by United Launch Alliance (ULA). A partnership between Lockheed Martin and Boeing, ULA was formed to consolidate operation of the Atlas V and Delta IV rockets and contracting of their launches to the US Government. ULA also operates Boeing’s older Delta II rocket, which will be retired later this year. Initially, Boeing and Lockheed Martin individually retained the rights to market Delta and Atlas to commercial customers – with ULA conducting the launches – however Delta is no longer offered for commercial missions and earlier this year Lockheed Martin and ULA reached an agreement for the latter to take over commercial operations of Atlas.

Atlas V is considerably more powerful than the Delta II rocket that deployed Phoenix. Its increased performance has led to a decision to fly the InSight mission from the Vandenberg Air Force Base in California instead of Florida’s Cape Canaveral Air Force Station from where most of NASA’s interplanetary missions to date have been launched. Located on the west coast of the United States, Vandenberg is typically used for missions that require high-inclination orbits, such as scientific, Earth imaging and military spacecraft that require near-polar orbits, communications and electronic surveillance satellites targeting inclined, elliptical Molniya orbits and radar reconnaissance satellites in retrograde orbits.

ULA flight design engineer Jen Krupp on designing the #AtlasV trajectory for @NASAInSight, the first interplanetary mission to launch from the West Coast of the U.S. pic.twitter.com/SeuKrR61Yc

Vandenberg would normally be ill-suited to an interplanetary launch, as an easterly launch azimuth provides increased performance because the rocket is working with, not against, the momentum of the Earth as it rotates. For the InSight launch, Atlas – even in the 401 configuration – had a sufficiently high performance margin to overcome this from Vandenberg. By scheduling the launch from Vandenberg, instead of Florida’s busy Space Coast, ULA and NASA gave themselves a better opportunity to launch within InSight’s tight window without disrupting – or being disrupted by – other launches.

InSight was the first interplanetary mission to launch from Vandenberg. NASA and the Ballistic Missile Defense Organization (BMDO) launched the Clementine spacecraft aboard a Titan II(23)G rocket from Vandenberg in 1994, which orbited the Moon and was then to have departed the Earth-Moon system to fly past near-Earth asteroid (1620) Geographos. Clementine completed the Lunar phase of its mission – its primary objective – successfully, but malfunctioned before departing Earth orbit for Geographos.

On several previous launches from Vandenberg, the upper stages of Atlas V rockets have also been disposed of by placing them into orbit around the Sun.

SLC-3E was used by Atlas-Agena rockets from 1961 to 1966. In late 1966 and 1967 three Atlas SLV-3 rockets, without upper stages also flew from the pad, carrying out suborbital tests of the X-23 PRIME lifting body. A fourth Atlas SLV-3, which was originally intended for an additional PRIME mission, was instead retrofitted with a solid-fuelled Star-37B upper stage – designated Burner II – and launched with a collection of geodesy, calibration and experimental payloads in August 1968 – however the rocket’s payload fairing did not separate as planned and it failed to achieve orbit. 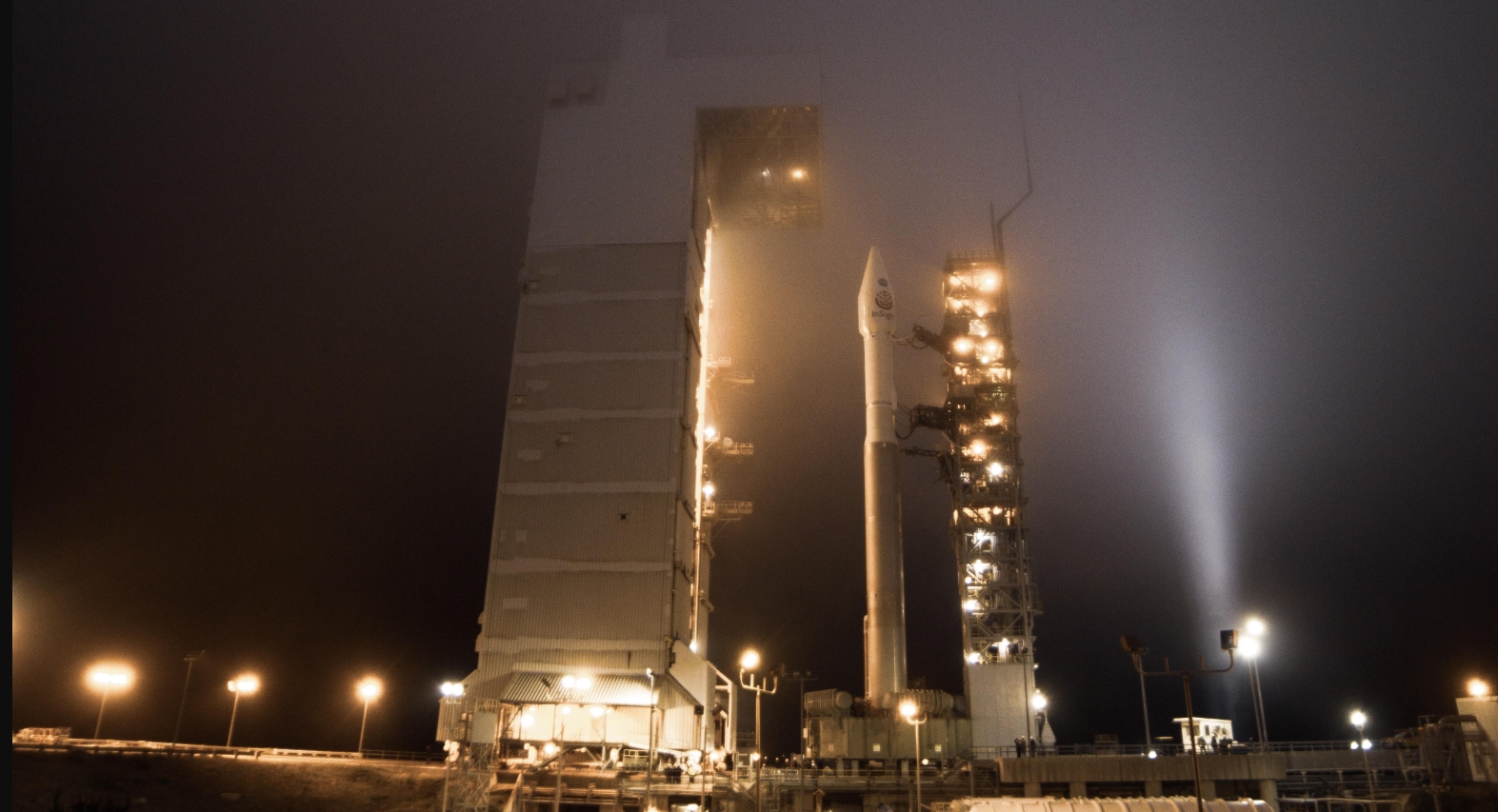 The Atlas SLV-3 Burner II launch was the last from SLC-3E for almost a decade, until an Atlas E/F SGS-1 was used to deploy the first Block I Global Positioning System (GPS) satellite from the pad in February 1978. Atlas E/F launches used decommissioned Atlas E and Atlas F missiles with a variety of upper stages to carry out orbital launches and suborbital test flights once the missiles were no longer required for active service.

The first seven GPS satellites were launched by Atlas E/F vehicles from SLC-3E before the launches moved to nearby Space Launch Complex 3W. This allowed SLC-3E to be modified to support the Atlas H rocket, using newly-built Atlas boosters based on the first stage of the Atlas G Centaur rocket then flying from the East Coast. Atlas H made five launches between 1983 and 1987, all from SLC-3E and all carrying Parcae ocean electronic surveillance satellites for the National Reconnaissance Office.

In the mid-1990s, SLC-3E was rebuilt for the Atlas II rocket, becoming the first West Coast launch pad able to support a cryogenically-fuelled rocket – the Atlas II’s Centaur upper stage. Atlas II first flew from Vandenberg in December 1999 with NASA’s Terra Earth science satellite, which was followed by two NRO launches in 2001 and 2003 with Intruder satellites – successors the Parcae missions of the 1980s.

Originally, Lockheed Martin had no plans to launch Atlas V from Vandenberg. Lockheed Martin intended to focus on lower-inclination launches from Cape Canaveral while leaving the less-numerous polar orbit missions to Boeing’s Delta IV. In 2003, however, Boeing was penalized over industrial espionage during the EELV procurement program and stripped of several launches – including ones that could not be conducted from Cape Canaveral. Lockheed Martin modified the Atlas II pad at Space Launch Complex 3E to accommodate the larger Atlas V, which made its first launch from the site in March 2008.

The InSight mission was the fifteenth launch of an Atlas V from Space Launch Complex 3E and the forty-sixth launch from SLC-3E overall. Unlike at Cape Canaveral, where Atlas is prepared for launch atop a mobile launch platform in the Vertical Integration Facility (VIF), away from the launch pad, at Vandenberg integration of the rocket takes place on the pad. Atlas is built up inside a mobile service tower, which is then rolled away from the rocket for launch.