Cygnus OA-9E delivers the science, won’t be used as experiment module this flight 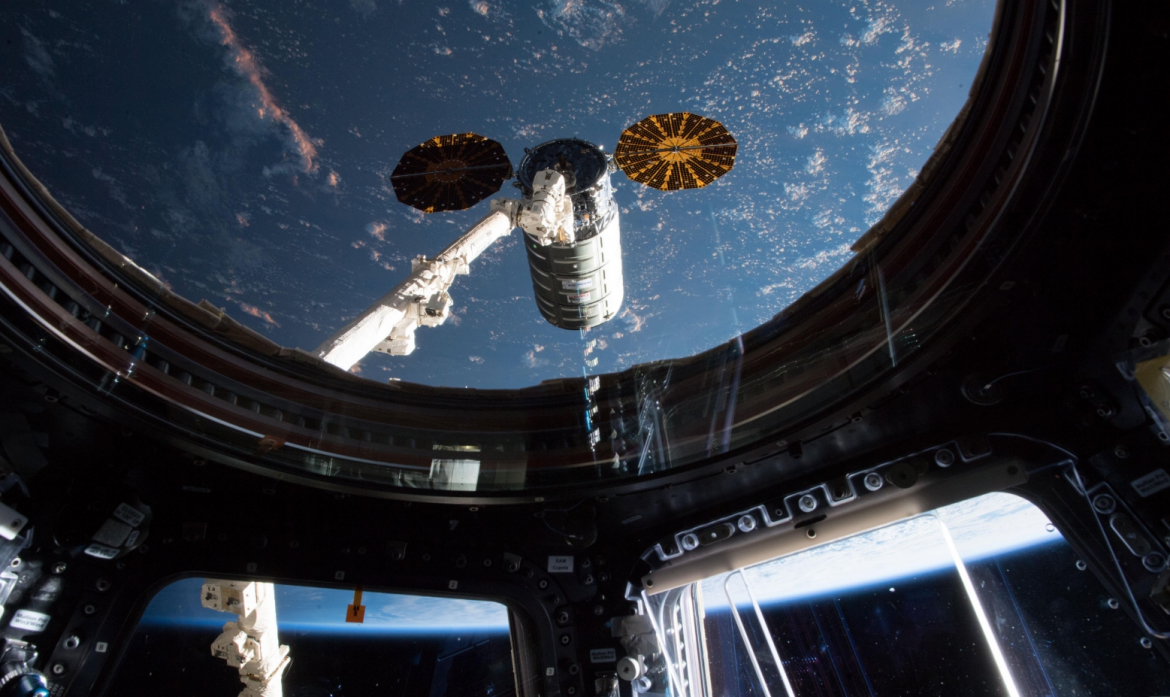 Just a few days after berthing to the International Space Station, the S.S. J.R. Thompson Cygnus is now in the process of being unpacked of its thousands of pounds of equipment and supplies, including numerous scientific experiments that will be performed over the coming weeks and months aboard the orbital lab.  Unlike the previous Cygnus, the OA-9E mission will not be used as a experiment module extension on the Station.

Science on the S.S. J.R. Thompson:

After a flawless launch and smooth sailing four-day orbital rendezvous with the International Space Station, the S.S. J.R. Thompson successfully rendezvoused with the orbital lab early Thursday morning, becoming the first spacecraft to use the new Common Communications for Visiting Vehicles (C2V2) radio – a new communications systems that will unify all U.S. segment vehicle comm systems and will be instrumental for the upcoming Commercial Crew spaceships.

After grappling Cygnus, the Station’s crew successfully berthed the Orbital ATK craft to the Node-1 nadir port of the Unity module and, following leak checks, opened Cygnus’ hatch and entered the vehicle to begin removing the 3,350 kg (7,385 lb) of equipment, supplies, and research contained within.

Unlike the previous Cygnus mission, this craft will not be used as an experiment module extension platform for the ISS.  “When we did that on OA-8, [that] was another demonstration of [Cygnus’] capability,” noted Frank DeMauro, Vice President & General Manager, Advanced Programs Division for Orbital ATK, in an exclusive interview with NASASpaceflight’s Chris Gebhardt.

“NASA isn’t planning on using that capability on this particular mission, but we think with a successful demonstration on OA-8, that [using Cygnus in such a way] could become a baseline for future missions.  So we do expect that, and it is available to NASA moving forward.”

Regardless, Cygnus has now delivered numerous scientific experiments to the six person crew of Station.   Some, but not all, of those experiments include Sextant Navigation investigation, Cold Atom Lab (CAL), and ICE Cubes Service.

The Sextant Navigation for Exploration Missions investigation focuses on stability and star sighting opportunities in microgravity using Station crewmembers to test a hand-held sextant that is intended for use on future crewed exploration missions.  The hope is that this investigation could aid future missions via the development of emergency navigation methods should sophisticated navigation systems suffer a failure.

According to NASA, the ability to sight angles between the moon or planets and stars offers crews another option to find their way home if communications and main computers are compromised.  “No need to reinvent the wheel when it comes to celestial navigation,” says principal investigator Greg Holt. “We want a robust, mechanical back-up with as few parts and as little need for power as possible to get you back home safely.”

A sextant is a mechanical instrument with an optical sight that navigators use to measure the angular distance between two visible objects for navigation.  While not a replacement for primary navigation systems, the sextant offers future crews another option to navigate their spacecraft home if needed.

In the simplest terms, the use of a sextant takes advantage of the human eye and the optical advantages it provides over camera-based systems, including important information regarding dynamic range and detail resolution.

Earth-based navigators have used sextants for centuries, and the sextant is no stranger to spaceflight – with the Gemini Program missions in 1965 and 1966 using sextant sightings from spacecraft.  The culmination of sextant use in spaceflight came during the Apollo 8 mission in December 1968 when James Lovell used the device to prove that the Apollo spacecraft could be navigated back to Earth from the Moon.

To conduct the sextant experiment aboard the ISS, crewmembers will use the Cupola module and its plethora of windows, which will provide a good analog for window and crew placement in NASA’s future Orion crew exploration vehicles.

Though the use of a sextant for space navigation is versatile to any spacecraft venturing out beyond Low Earth Orbit, if the test aboard the Station is successful, NASA intends to fly a follow-on sextant navigation experiment on the first crewed flight of Orion, the EM-2 mission, currently slated to launch No Earlier Than 2023 aboard an SLS Block-1 vehicle.

The new Cold Atom Lab (CAL) facility is designed to help answer important questions in modern physics via the production of clouds of atoms that are chilled to about one ten billionth of a degree above absolute zero – much colder than the average temperature of deep space.  At these low temperatures, atoms have almost no motion, allowing scientists to study fundamental behaviors and quantum characteristics that are difficult or impossible to determine at higher temperatures.

The quest for ever colder temperatures has been a major theme of physics for over a century, leading to such breakthroughs as the discovery of superfluidity and superconductivity and, more recently, to the development of laser cooling techniques.  This quest is because all matter has both a wave aspect and a particle aspect and therefore act differently at different temperatures.

To this end, the CAL is a multi-user facility designed to be a simple but versatile experimental facility, capable of producing ultra-cold samples of several atomic species, loading them into optical lattices or very weak magnetic traps, and then studying them under a variety of conditions.

The CAL itself is a compact, atom-chip based apparatus that offers investigators a suite of precision tools to enable a wide variety of science via three atomic species [Rubidium (87Rb) and Potassium (either 40K or 41K)], microwave state selection, and adiabatic rapid passage that enables any of 24 different quantum states to prepare with an infinite number of mixtures and super positions.

After this, high and low resolution imaging will allow scientists to view atom clouds from two directions while delta-kick cooling will allow them to access a previously unexplored range of effective temperatures and enable precise focusing and shaping of atomic clouds.

An ICE Cube unit like the ones that will be installed into Columbus. (Credit: ICE Cube Services)

The International Commercial Experiment, or ICE Cubes Service, is a partnership between the European Space Agency and Space Application Services to test and commission the first European commercial system to increase access to the Columbus module of of the International Space Station.

ICE Cubes use a sliding framework permanently installed in the Columbus module and “plug-and-play” Experiment Cubes that are easy to install and remove, come in different sizes, and can be built with commercial off-the-shelf components – significantly reducing the cost and time to develop experiments.

“The idea is to provide fast, direct and affordable access to space for research, technology and education for any organization or customer,” says Hilde Stenuit of SpaceAps, which designed and developed the facility and made it flight-ready.  ICE Cubes remove barriers that limit access to space, providing more people access to flight opportunities. Potential fields of research range from pharmaceutical development to experiments on stem cells, radiation, and microbiology, fluid sciences, and more.

Under this program, customers maintain ownership of the hardware and software at all times during the flight envelope, develop and integrate their experiments, and are responsible for their reliability and performance during the experiment’s stay on the Station. A standard Experiment Cube is 10 cm x 10 cm x 10 cm in standard form, though customizable sizes are possible, and will be launched in soft configurations inside Nomex foam containers.

Once installed inside Columbus, customers are able to interact with their Experiment Cube in near real-time by using complimentary mission control software.  Over the course of the mission, experiment data can be provided via near real-time or deferred downlink or by physical downloaded with a return vehicle from orbit via USB storage media.

Each Experiment Cube holds a typical mission duration of four months, but different durations can be agreed upon prior to launch.  At the end of a mission, each Experiment Cube can be returned to Earth via a SpaceX Dragon or be disposed of via a Russian Progress, an Orbital ATK Cygnus, or a JAXA Kounotori transfer vehicle.