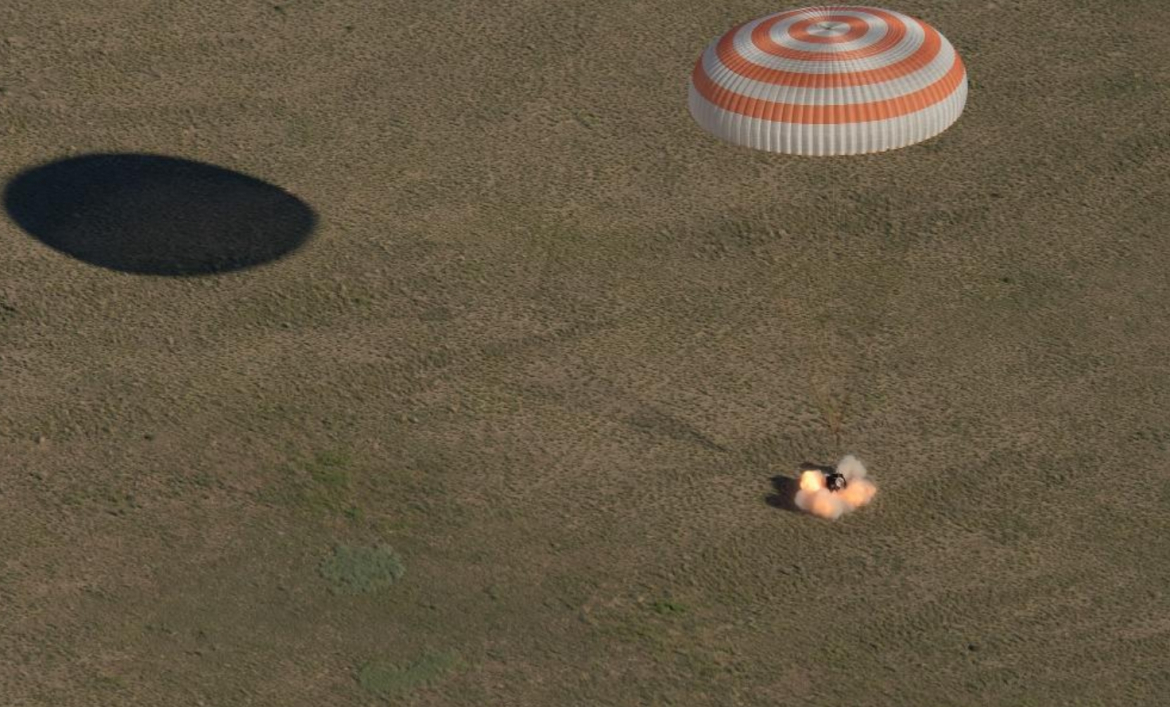 After launching from the wintry landscape of the Baikonur Cosmodrome in Kazakhstan on 17 December 2017, the three crewmembers of Soyuz MS-07 ended their six month stay aboard the International Space Station.

Hatches between Soyuz MS-07 and the nadir docking port of the Station’s Rassvet module were closed at 01:55 EDT (0555 UTC), with Shkaplerov (Roscosmos), Tingle (NASA), and Kanai (JAXA) undocking from the orbital outpost at 05:16 EDT (0916 UTC) and backing away from the ISS.

Afterward, the trio closed the hatch between the Soyuz MS-07’s Orbital Module (where the docking systems and hatch to the Station are located) and the Descent Module (where the crew sits for launch, reentry, and landing).

Two and a half hours after undocking, the Soyuz MS-07 performed its deorbit burn at 07:47 EDT (1147 UTC) using an engine on the back of the Instrumentation and Service Module.  Shortly thereafter, the Soyuz separated into its three constituent parts – the Orbital Module, the Descent Module, and the Instrumentation and Service Module – with only the Descent Module surviving atmospheric reentry.

Once safely through the plasma stage of reentry, a period during which communications can become ratty and unreliable, the Descent Module released its parachutes and eased down toward the Kazakh steppes.

Landing is slated to occur around 08:40 EDT (1240 UTC) on Sunday, 3 June, though prevailing winds and atmospheric flight can vary this anticipated time for Soyuz.  Likewise, this landing time was based on an assumed nominal reentry trajectory and profile.

The actual touchdown time was about a minute ahead of schedule.

Soyuz had a backup trajectory available to it – known as a Ballistic Reentry – in the event that an emergency is detected after the deorbit burn occurs. 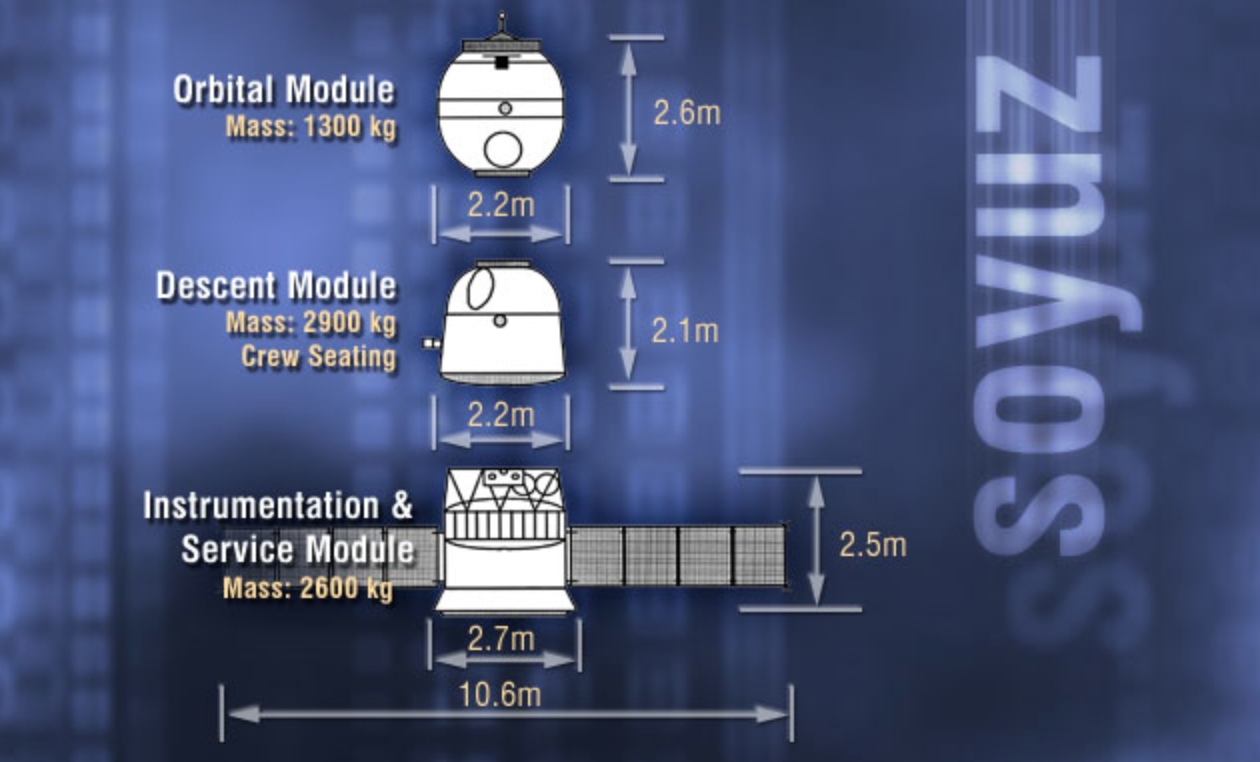 Overview of the three main parts of the Soyuz crew vehicle. (Credit: NASA)

This type of emergency reentry profile last occurred on back-to-back Soyuz TMA landings on the TMA-10 and -11 missions when the Instrumentation and Service Module failed to separate from the Descent Module.  When this occurred, the Descent Module’s computers triggered a ballistic reentry on both flights – a trajectory designed to get the crew through reentry as quickly as possible to maintain their safety.

The trajectory on ballistic reentries is much steeper, exerts higher G-force loads on the crew, and results in a landing hundreds of kilometers from the intended recovery zone.  In both the Soyuz TMA-10 and -11 cases, the ballistic reentry worked as designed, protected the crew, and got them to the ground safely, where they were then recovered.

During their six-month stay aboard the International Space Station, the three members of the Soyuz MS-07 crew participated in numerous scientific studies aboard the research outpost, including numerous experiments brought to the Station by the OA-8E Orbital ATK Cygnus resupply vehicle as well as the CRS-13 and CRS-14 missions by the SpaceX Dragon capsule.

Assessing Osteoblast Response to Tetranite experiment examined the cellular response to a new type of bone adhesive in a microgravity environment by growing bone cells in the presence of a commercially available bone adhesive and a new product called Tetranite.  Sets of bone cell cultures grew with the different adhesives for 20 days and were then fixed, frozen, and returned to Earth for detailed analysis in a fully equipped biological laboratory.

The goal of this investigation was to explore the ability of Tetranite, a synthetic bone material capable of adhering bone to metal within minutes, to accelerate bone repair.  It is well known that microgravity affects bone cell growth and healing, mimicking the symptoms observed in osteoporosis. This investigation sought to evaluate the response of osteoblasts (a bone cell subtype responsible for renewing bones) to Tetranite.

Understanding bone cell-Tetranite interactions could provide insight into the post-fracture bone healing response and assist in the development of more effective treatments for patients with osteoporosis.

Rodent Research-6 (RR-6) used mice flown to the Station as well as a set of mice on Earth to test a drug delivery system for combatting muscular breakdown (atrophy) in space or during period of muscle inactivity (disuse conditions).

RR-6 included groups of mice selectively treated with a placebo or implanted with a nanochannel drug delivery chip that administered compounds meant to maintain muscle in low gravity/disuse conditions.  Two groups of 20 mice lived aboard the ISS in the rodent habitat for durations of one and two months for this experiment which specifically studied an implantable drug delivery system that could circumvent the need for daily injections.

The drug formoterol, used in the management of asthma and other medical conditions, was administered by controlled release from a nanochannel implant to achieve a constant and reliable dosage.  If successful, this system could serve as a more reliable and accurate technology for drug delivery.

Moreover, it could rapidly translate into a commercial product to treat sarcopenia, or muscle wasting – a condition that affects more than 50% of the geriatric population.  Current therapeutics used to treat this condition are limited to physical activity or generic hormones. The most commonly used pharmaceutical intervention for sarcopenia is formoterol, but administering these drugs requires a daily injection, which can be inconvenient.

This will test plans to develop an implantable device that will safely administer formoterol over a long period of time without patients needing a daily injection, something that could greatly improve quality of life. 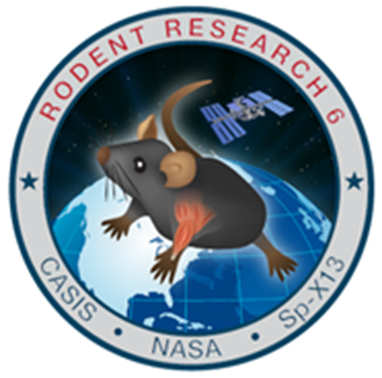 The Comparative Real-time Metabolic Activity Tracing for Improved Therapeutic Assessment Screening Panels experiment from 490 Biotech sought to illuminate the effects of microgravity on the metabolic impact of therapeutics by evaluating the effectiveness of auto-bioluminescent human tissue culture as a tool for streamlining microgravity-based drug discovery assays (testing of a metal or ore to determine its ingredients and quality).

For this experiment, the light emitted by the 490 Biotech bioluminescent cells was used to judge the cells’ overall health – with healthy cells glowing bright and dead cells not glowing at all.  While this type of testing is already being conducted on Earth, the microgravity environment is actually a better medium in which to study human cells because “somewhat ironically, when you grow these types of human cells in a dish, if you grow them in microgravity their physiology, the way they behave, is actually more similar to how they behave in the body then if you grow them in a lab on Earth,” said Dr. Dan Close of 490 Biotech.

“Our hope is that we can demonstrate that taking advantage of the more natural human physiology that occurs within these cells during growth on the International Space Station can provide a way for pharmaceutical companies to do [part of their drug] screenings at low cost in Low Earth Orbit and get better information about the safety and potential functionality of these new drug compounds,” said Dr. Close.

In short, this experiment could potentially lead to more effective and less expensive drug compounds for use here on Earth.