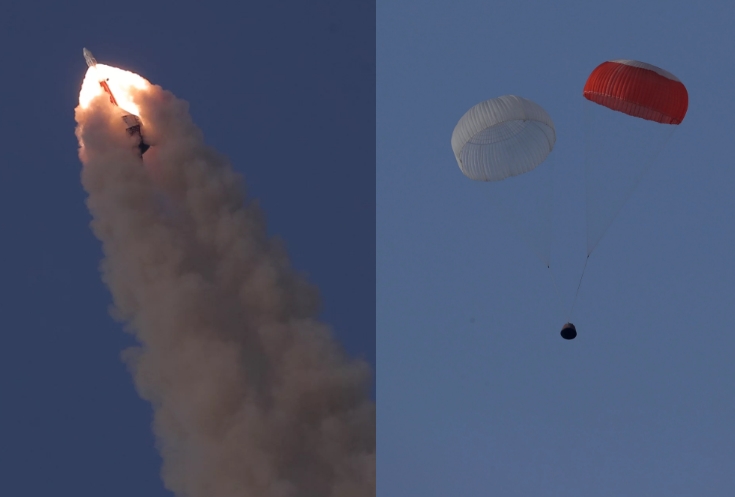 India took another step forward with its human spaceflight program, as ISRO tested the crew escape system for its crew capsule in an emergency pad abort situation. The test lasted about 220 seconds, during a two-hour window that opened at 06:00 local time (00:30 UTC). ISRO is yet to confirm the test, but Indian media are claiming it was a success.

While the Indian Space Research Organisation (ISRO) has not made manned space missions one of their highest priorities, the agency has been quietly proceeding with work on a capsule that would launch atop the GSLV Mk.III rocket and carry a crew of two into orbit.

The project’s most high-profile test came three and a half years ago, when the Crew Module Atmospheric Reentry Experiment (CARE) successfully demonstrated that the spacecraft could withstand the rigors of atmospheric reentry. 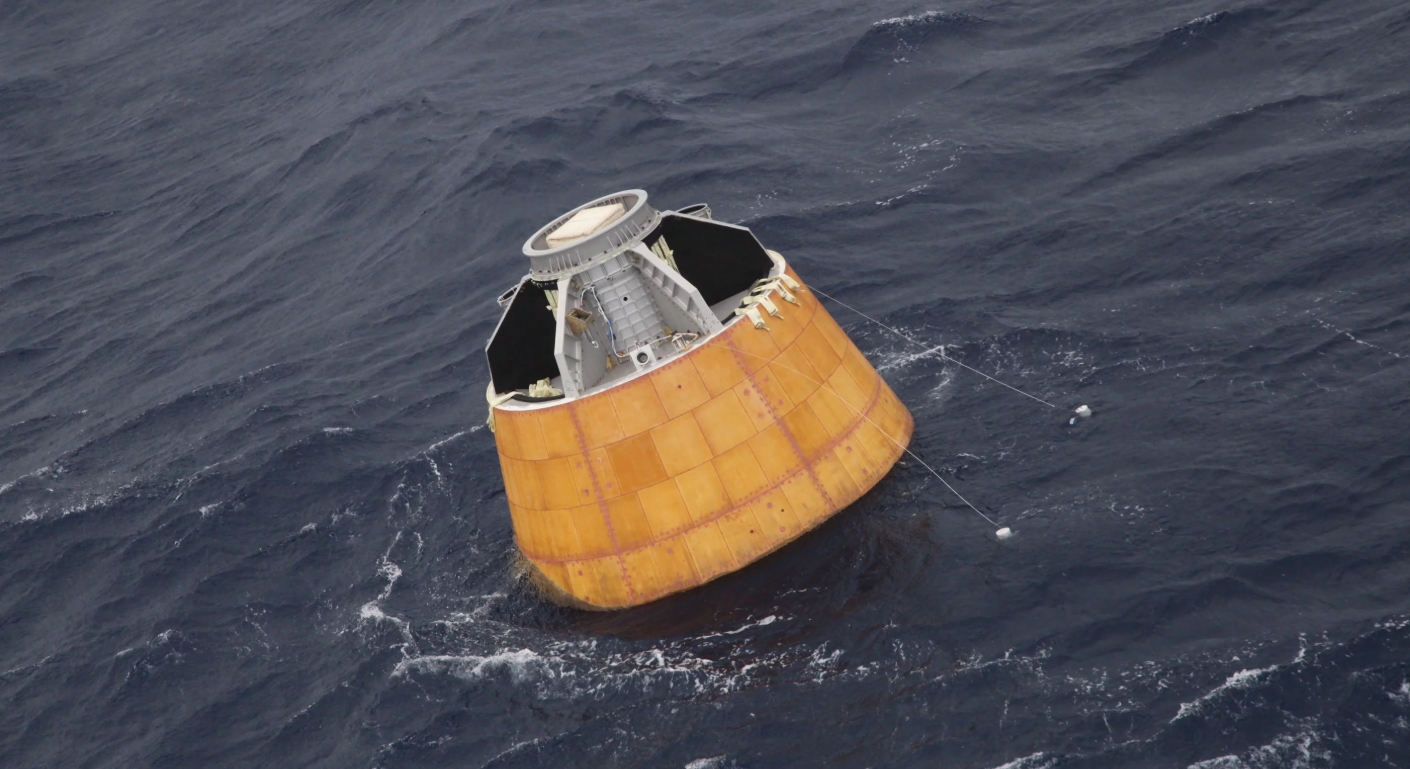 The capsule used in the LVM3-X/CARE mission.

The test, which was unmanned, is designed to validate the launch escape system that would carry the spacecraft and its crew to safety in the event of a major malfunction during the early stages of a future manned launch. Unlike CARE, which was carried to an altitude of 126 kilometers (78.3 miles, 68.0 nautical miles) on the first test flight of the GSLV Mk.III, the flight took place entirely within Earth’s atmosphere.

ISRO has not made many details of the mission public. However, the crew capsule will likely lift off from atop a dummy booster, allowing it to simulate separating from a failing rocket.

Under the power of its abort motors the capsule will rise into the sky above Sriharikota and head out to sea – reaching an altitude of around 2.5 kilometers (1.6 miles, 1.3 nautical miles).

The powered phase of flight will have lasted approximately twenty seconds, after which it would take the capsule another 200 seconds to descend back to Earth. The spacecraft landed offshore, using parachutes to slow its descent. ISRO has not announced whether the spacecraft will be recovered, or left in the ocean following its mission.

The capsule flying the abort test is fitted with an altimeter and satellite navigation receivers to track its position. It was to use India’s NavIC, or IRNSS, navigation system as well as the US Global Positioning System (GPS), augmented by GAGAN transmitters on Indian geostationary satellites.

Telemetry was to be transmitted to the ground directly, and also uplinked to the GSAT-6 satellite in geostationary orbit. Overall the test vehicle stands 14 meters (46 feet) tall, with a mass of 12,500 kilograms (27,600 lb).

The mission was conducted from the Satish Dhawan Space Centre on Sriharikota Island, using one of the center’s sounding rocket launch areas. This facility is located less than 200 metres (660 feet) from the Sriharikota coastline, about two and a half kilometres (1.6 miles) to the south of Satish Dhawan’s Second Launch Pad (SLP) that supports PSLV and GSLV missions, and three and a half kilometres (2.2 miles) north of the derelict launch complexes that were used by the earlier SLV and ASLV rockets. 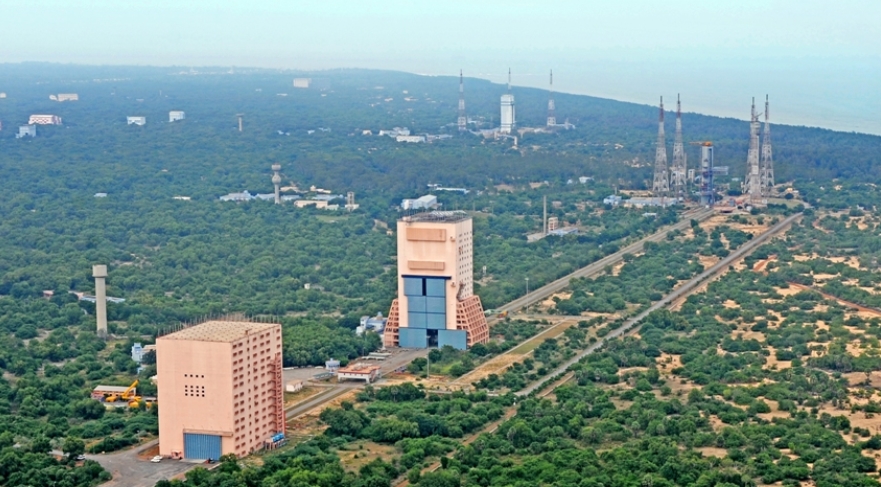 The sounding rocket complex consists of several hardpoints and rail launchers to support different types of vehicle and launch profile. A crescent-shaped road runs around the pads, with a chord and perpendicular roads providing access. The abort test will use a surface pad at the north of this area that has been specially widened.

Formerly known as the Sriharikota High-Altitude Range (SHAR), Satish Dhawan has been the launch site for all of India’s orbital launches, with its First and Second Launch Pads both currently used by the PSLV rocket and SLP also serving the GSLV Mk.II and GSLV MK.III vehicles. The next orbital launch from the site could happen later this month, with a GSLV Mk.III slated to deploy the GSAT-29 communications satellite.

The test demonstrates a launch pad abort, where a problem before or at the moment of liftoff requires that the crew be ejected to safety from their rocket. This is the scenario in which the escape system of a Soviet Soyuz 7K-ST spacecraft saved the lives of cosmonauts Vladimir Titov and Gennady Strekalov, the only time an escape mechanism has so far been called upon during an actual manned mission.

The Soyuz incident, which occurred in September 1983, came as the cosmonauts were preparing for launch to the Salyut 7 space station aboard a mission that would have been designated Soyuz T-10 had it reached orbit. Ninety seconds before the planned liftoff, one of the Soyuz-U rocket’s boosters began leaking propellant onto the launch pad. This ignited, and the fire quickly spread to the rocket.

Hampered by the fire, which had eaten through the primary communications lines to the vehicle, ground controllers were able to send a backup radio signal to activate the abort system, carrying the crew to safety in their Descent Module just seconds before the rest of the vehicle exploded.

A launch escape system can also protect the crew against a failure during the early stages of ascent. Like Soyuz, as well as the US Mercury, Apollo and Orion spacecraft and China’s Shenzhou, ISRO’s abort system uses a tower structure mounted at the top of the vehicle, with small but powerful motors that fire to pull the spacecraft away from the rocket.

Once the rocket has climbed out of the lower atmosphere, less force is needed to initiate the abort and the escape system is typically jettisoned, with the spacecraft then relying on its own engines to pull it clear should the need arise. This happened during the late-ascent abort of another Soyuz mission, in 1975, when two cosmonauts en route to Salyut 4 were forced to abort their mission after their rocket’s second and third stages failed to separate properly.

In contrast, the Starliner and Dragon spacecraft currently under development by Boeing and SpaceX for the US Commercial Crew program use “pusher” abort systems with motors mounted on the spacecraft itself to push it away from a failing booster.

While no engineer hopes that a launch escape system will ever be needed, it must still be well tested as it is vital to protect the lives of astronauts in what is still a dangerous occupation. NASA has conducted two pad abort tests for its Orion spacecraft – the first, Max Launch Abort System (MLAS) in 2009, tested a pusher-type system that was proposed for use with the Ares I rocket.

The second, a year later, demonstrated the tower-based system that will be used on future missions. SpaceX conducted a pad abort test with the Dragon v2 spacecraft in 2015. Boeing will conduct a similar test ahead of Starliner’s first manned mission.

Such tests are nothing new – similar trials were conducted ahead of the Mercury and Apollo programs, while the Soviet Union flew pad abort tests before putting cosmonauts aboard the Soyuz.

The pad abort test is one of two types of test typically used to validate a launch escape system, the other being an ascent abort, where the capsule is carried to altitude atop a rocket and fires its abort system during its climb. ISRO has not announced any plans for such flights. However, images have shown what appears to be the design of an in-flight-abort test vehicle with a solid-fueled first stage.

Similar vehicles, named Little Joe I and Little Joe II respectively, were used in the Mercury and Gemini abort test programmes, while Northrop Grumman is building an abort test booster for Orion based on the first stage of the now-decommissioned Peacekeeper missile. SpaceX plans to use a recovered Falcon 9 first stage for their ascent abort test with Dragon.