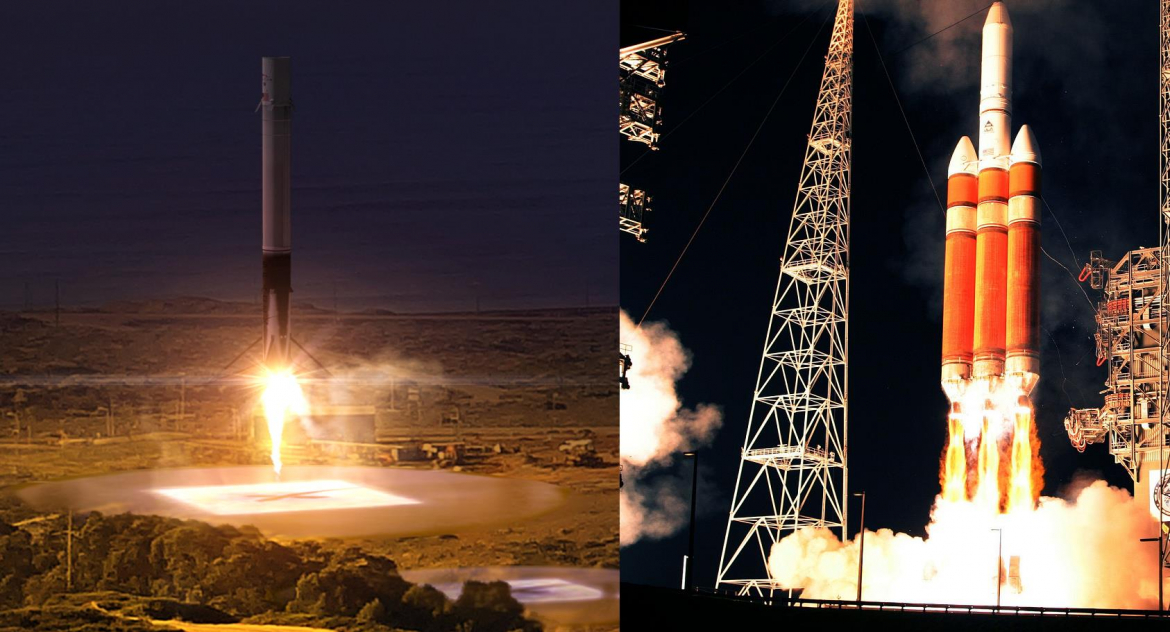 With the first half of 2018 in the books, SpaceX and United Launch Alliance’s near term launch manifests are taking shape with an exciting 15 day period between 20 July and 4 August during which four flights are scheduled.  SpaceX has also officially filed paperwork with the Federal Communications Commission, FCC, to perform the first Return To Launch Site landing at Vandenberg Air Force Base, California, of the Falcon 9 rocket No Earlier Than September.

Following a busy start to 2018 for SpaceX, during which the company launched 11 Falcon 9s and one Falcon Heavy (averaging two flights per month), a three week lull has now descended over the company as they prepare their West Coast pad and East Coast SLC-40 pad to begin hosting Block 5 variants of the Falcon 9 booster.

Up next for the company will be the 13th Falcon family flight of the year with the Iridium NEXT-7 payload from Vandenberg Air Force Base in California.

As with all of the Iridium NEXT flights to date, this one will have an instantaneous, to-the-second launch window, giving the launch team no room to work any issues that might arise during the expedited fueling processing of the Block 5 – which begins at T-35 minutes and counting.

All 10 Iridium NEXT satellites for launch #7 are at VAFB now, and mating to dispenser is well along – to be completed this weekend. Everything else needed is there as well and being processed – schedule looking good! #Tminus3weeks #donttellVandenbergfogyet. pic.twitter.com/IM6T4dH4tO

Also, like the first three Iridium NEXT missions, this one will result in a recovery of the Falcon 9 first stage following launch, with the Block 5 booster, understood to be core B1048, performing a landing on the Autonomous Spaceport Drone Ship (ASDS) Just Read The Instructions off the coast of California.

Recovery of the Falcon 9 first stage for Iridium NEXT-7 will mark the first time that a West Coast booster recovery has occurred since the Iridium NEXT-3 flight on 9 October 2017.

Since Iridium NEXT-3, all West Coast boosters have been Block 3 or Block 4 Falcon 9s flying on their second missions, and were thus expended by SpaceX while performing post-separation atmospheric tests.

As has been the case with recent West Coast missions, an attempt to recover the Iridium NEXT-7 payload fairing will be made by the fairing catcher ship Mr. Steven, which is expected to leave the Port of Los Angeles a couple of days before liftoff.

Since the initial fairing recovery attempt, Mr. Steven has been getting closer and closer to achieving the goal of catching a payload fairing from a Falcon 9 as it descends slowly under parafoil toward the Pacific. 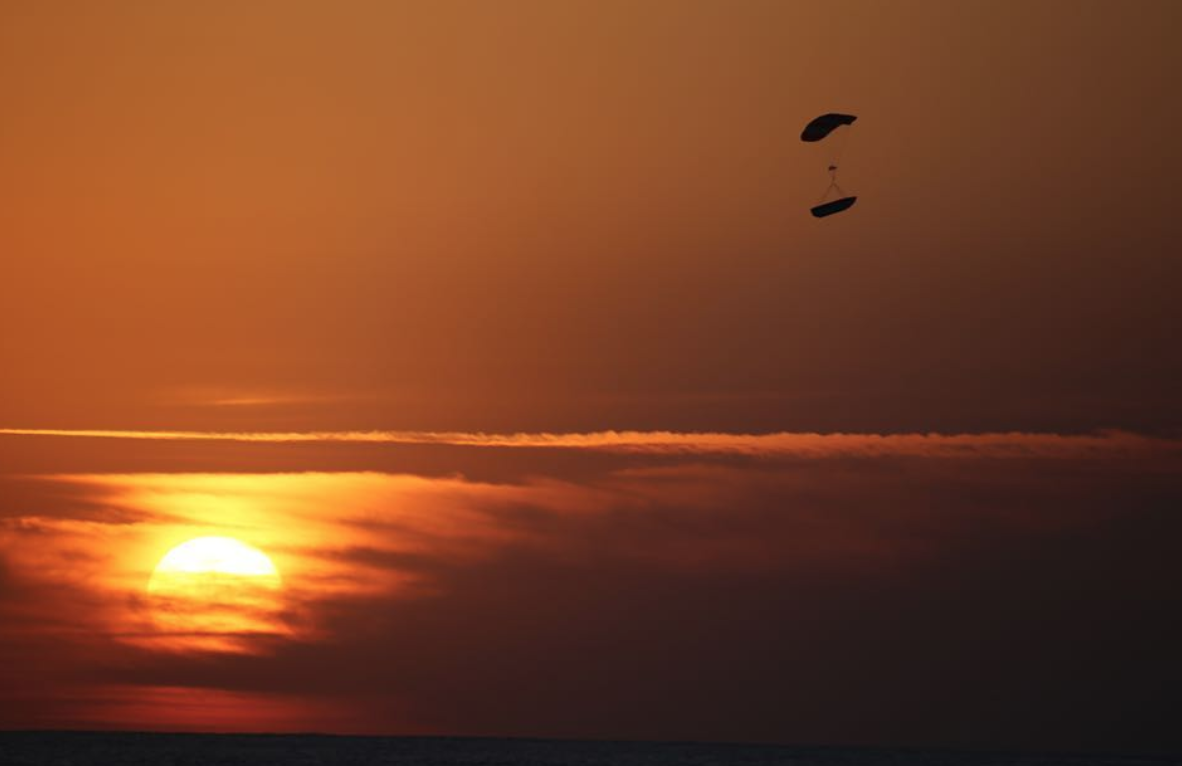 A Falcon 9 payload fairing descends toward the Pacific Ocean and Mr. Steven for a recovery attempt earlier this year. (Credit: SpaceX/Elon Musk)

The most recent attempt to capture a payload fairing is understood to have missed the netting of Mr. Steven by about 50 meters, or just 164 ft.

Following Iridium NEXT-7, SpaceX will move immediately into launch operations for its next mission, that of Telstar 19V from SLC-40 at the Cape Canaveral Air Force Station, Florida.

Telstar 19V is currently scheduled to launch just 44 hours after Iridium NEXT-7 at 01:50 EDT (05:50 UTC) on 22 July – which would make it the fastest turnaround in company history between Falcon 9 launches, beating the previous record held between Bulgariasat-1 and Iridium NEXT-2 at 49 hours.

Telstar 19V will also be launched on a brand new Falcon 9 Block 5 booster, understood to be Core B1047, and will mark the first time that a Block 5 Falcon 9 launches from SLC-40 at the Cape Canaveral. 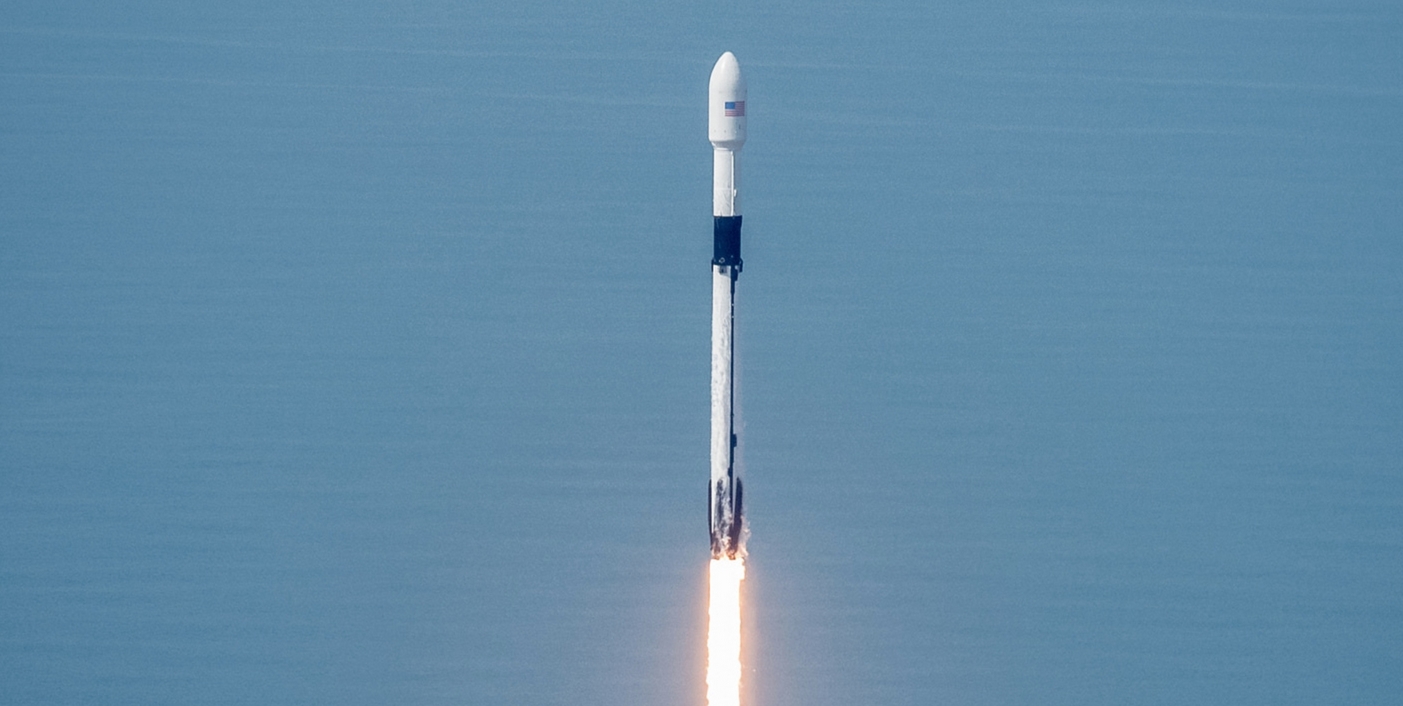 The first Falcon 9 Block 5 rocket launches from Florida in early May 2018. (Credit: SpaceX)

Telstar 19V has a 4-hour launch window, opening at 01:50 EDT and closing at 05:50 EDT (0550-0950 UTC), and will see the satellite lofted into Geostationary Transfer Orbit – resulting in a Block 5 booster recovery attempt on the East Coast ASDS Of Course I Still Love You drone ship.

Once Telstar 19V is away, SpaceX’s Florida team will move immediately into pad turnaround operations to prepare for the company’s next flight, that of Telkom-4 (Merah Putih), which is scheduled to fly just 11 days after Telstar 19V from SLC-40 on NET (No Earlier Than) 2 August 2018 at 01:19 EDT (05:19 UTC).

This mission is also understood to be targeting use of a brand new Falcon 9 Block 5, most likely Core B1049, and given the satellite’s orbital insertion into Geostationary Transfer Orbit will also make an ocean landing on the ASDS Of Course I Still Love You.

What makes this particular Falcon 9 mission a little more interesting is the fact that it is currently slated on the Eastern Range to occur just two days prior to a flagship scientific launch by United Launch Alliance’s Delta IV-Heavy rocket with NASA’s Parker Solar Probe.

Parker Solar Probe will be the first mission in human history to attempt to graze the surface of the Sun as it does multiple scientific flybys of our solar system’s star.

But in order to get into its unique science orbit, Parker Solar Probe must perform multiple flybys of the planet Venus.  As such, it must launch into an interplanetary launch window between Earth and Venus, a window that is only open this year between 31 July and 19 August.

However, should the Telkom-4 Falcon 9 experience an issue and have to delay from its 2 August launch date, this would present somewhat of a complication off the Eastern Range with the two providers. 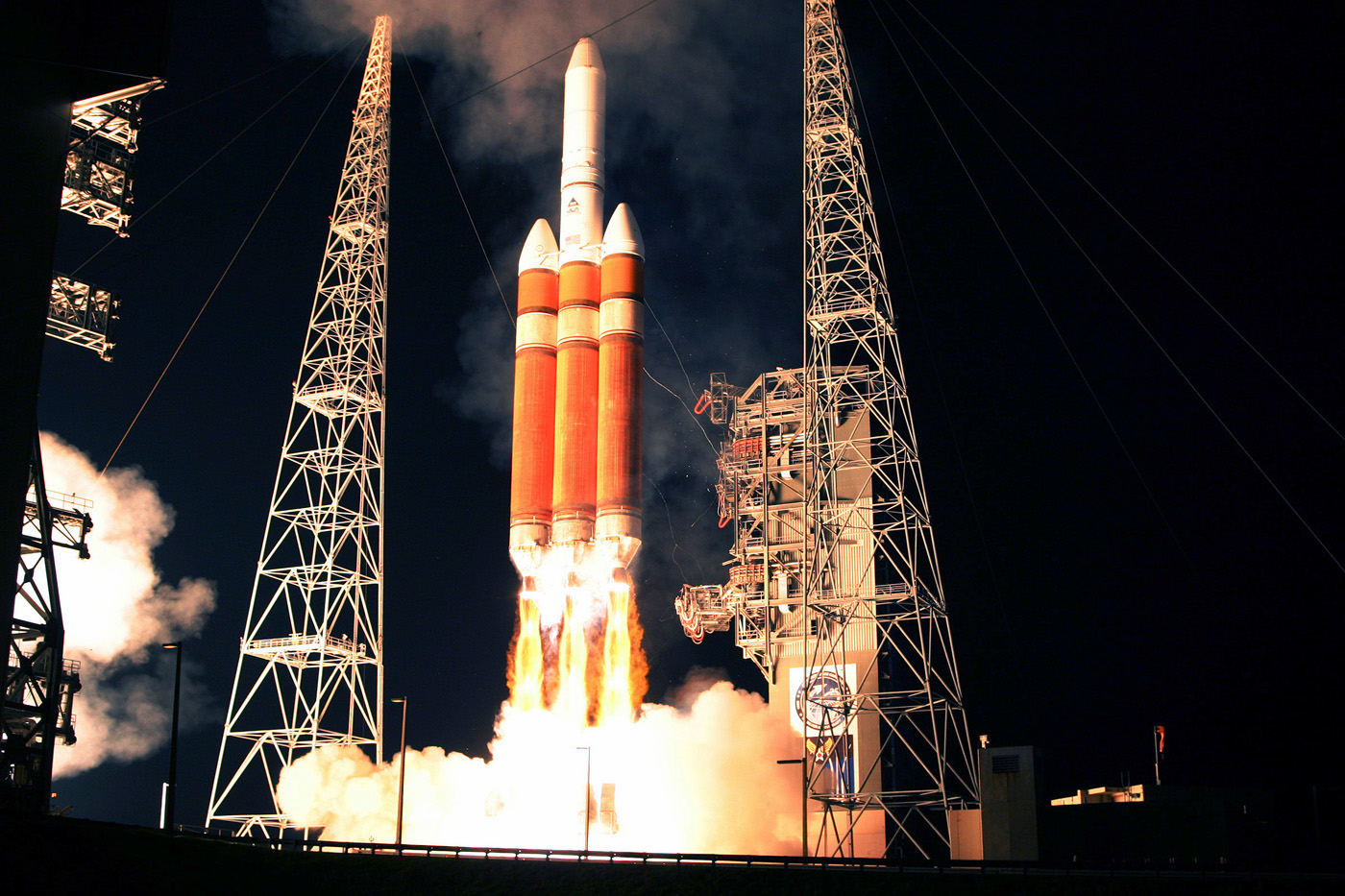 Moreover, as previously seen in March of this year, while the Eastern Range has the ability to host two independent launches within 24 hours of each other thanks to Falcon 9s Autonomous Flight Termination System, there are Range user complications to attempting such a feat.

Earlier this year, SpaceX had requested that a Falcon 9 rocket be allowed to launch the HispaSat 1F mission just 16 hours ahead of a United Launch Alliance Atlas V rocket launch of the GOES-S weather satellite.

SpaceX requested this and that the Eastern Range was willing to approve such a rapid launch sequence from a technical and emergency response standpoint.

However, NASASpaceflight.com understands that such a rapid launch sequence from two neighboring launch pads (SLC-40 and SLC-41, SpaceX and ULA, respectively, are just 1.5 miles from each other) would have impacted United Launch Alliance’s pre-launch timelines for the Atlas V – which rolled to its pad just one day before launch and mere hours before the Falcon 9 would have launched.

This has been Range Requested for a too long now. Probably didn't help that Falcon 9 and Atlas V are on neighboring pads.

Getting closer to this "two on the same day on the same range" becoming a reality, however. They are going to need it before long with all these rockets! https://t.co/Jl2rXvcikv

As a result, the Eastern Range eventually asked SpaceX to delay HispaSat 1F’s launch until after the Atlas V mission.

Regardless, under the currently requested in schedules, early August looks to be a busy time for the Florida space coast.

Moreover, all four of these launches beginning on 20 July will occur within 15 days of each other per the current timeline – with three of those four missions being Falcon 9s.

Looking slightly farther ahead into September, it is now known based on Federal Communications Commission (FCC) filings that SpaceX plans to attempt the first Return To Launch Site landing of a Falcon 9 rocket at Vandenberg Air Force Base, California, No Earlier Than early-September.

While it is understood that the increased ability of a Block 5 Falcon 9 launching an Iridium NEXT mission leaves enough performance margin and propellant to RTLS to Vandenberg, it is likely that environmental restrictions (seal nesting/mating season) or technical work on the landing pad at SLC-4W prevent Iridium NEXT-7 from attempting the first West Coast RTLS.

SpaceX files for a permit with the FCC to enable an RTLS at Vandenberg Air Force Base for a mission NET September 2018. The mission is not yet known but is most likely SAOCOM 1A.

A great deal of work has gone on at the Vandenberg SpaceX launch site to prepare for such an event, with pad SLC-4W being prepared as the landing zone for RTLS-ing West Coast Falcon 9s.

For a Vandenberg RTLS landing, the Falcon 9 will launch from SLC-4E and return to SLC-4W, which is just 1,425 ft (434.3 m) away – measured from center of launch mount to center of landing pad.

The commencement of Vandenberg RTLS landings has been a long time coming, with environmental studies finally clearing the way two years ago on 7 October 2016. Since then, SpaceX has been hard at work building the landing pad and assembling/testing all of the systems needed to safely track and communicate with a returning Falcon 9 booster to SLC-4W and all the equipment needed to safe, process, and house RTLS landed boosters.

While a specific mission attached to the FCC West Coast RTLS license is not 100% known, based on public comments, it is likely that this flight will be SAOCOM 1A – as Iridium NEXT-8, the only other possible contender, is understood to be NET late-September/early-October at present.