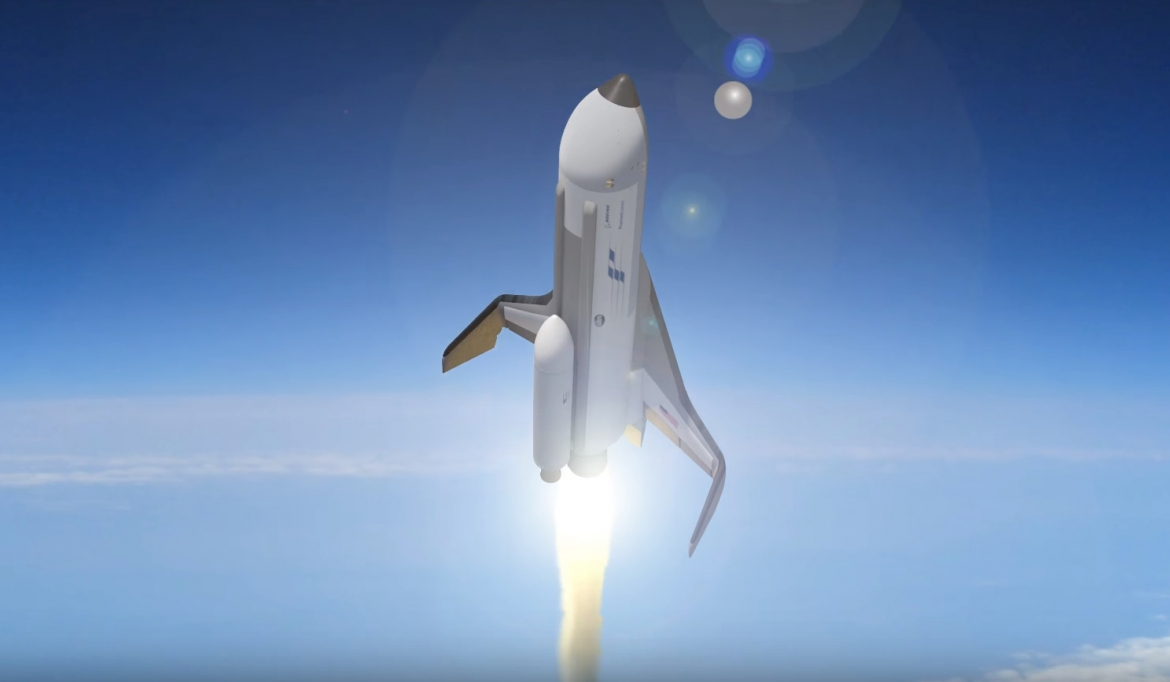 Primarily built from hardware long in storage, the parts rebuild of the reusable engine is called the AR-22 and it is being qualified for use in the Experimental Space Plane (XSP) vehicle that is being designed and built by Boeing for the U.S. military Defense Advanced Research Projects Agency (DARPA).

The XSP is intended to evaluate a launch vehicle that can be operated on a daily basis to deliver small class payloads. Boeing is developing a reusable plane as a first stage booster that will launch vertically like a rocket, using a single AR-22 engine from Aerojet Rocketdyne.

The plane can carry an expendable upper stage payload out of the atmosphere and up to speeds of Mach 10, release the payload, and then glide back to Earth and land conventionally.

Also known as the Phantom Express, a key capability targeted for the XSP is rapid reuse. The vehicle will be powered by a single AR-22 engine and the goal of the test series was to demonstrate that it could be hot-fired every 24 hours for ten consecutive days.

“This test campaign that we just finished, which is the firing of 10 [times] in 10 days, was a significant ‘go/no-go’ milestone for us in order for us to move forward with the program,” Scott Wierzbanowski, DARPA’s Program Manager for XSP, said during a teleconference on July 10. “We needed to show that the main propulsion system, the AR-22, could in fact support rapid turn operations.” 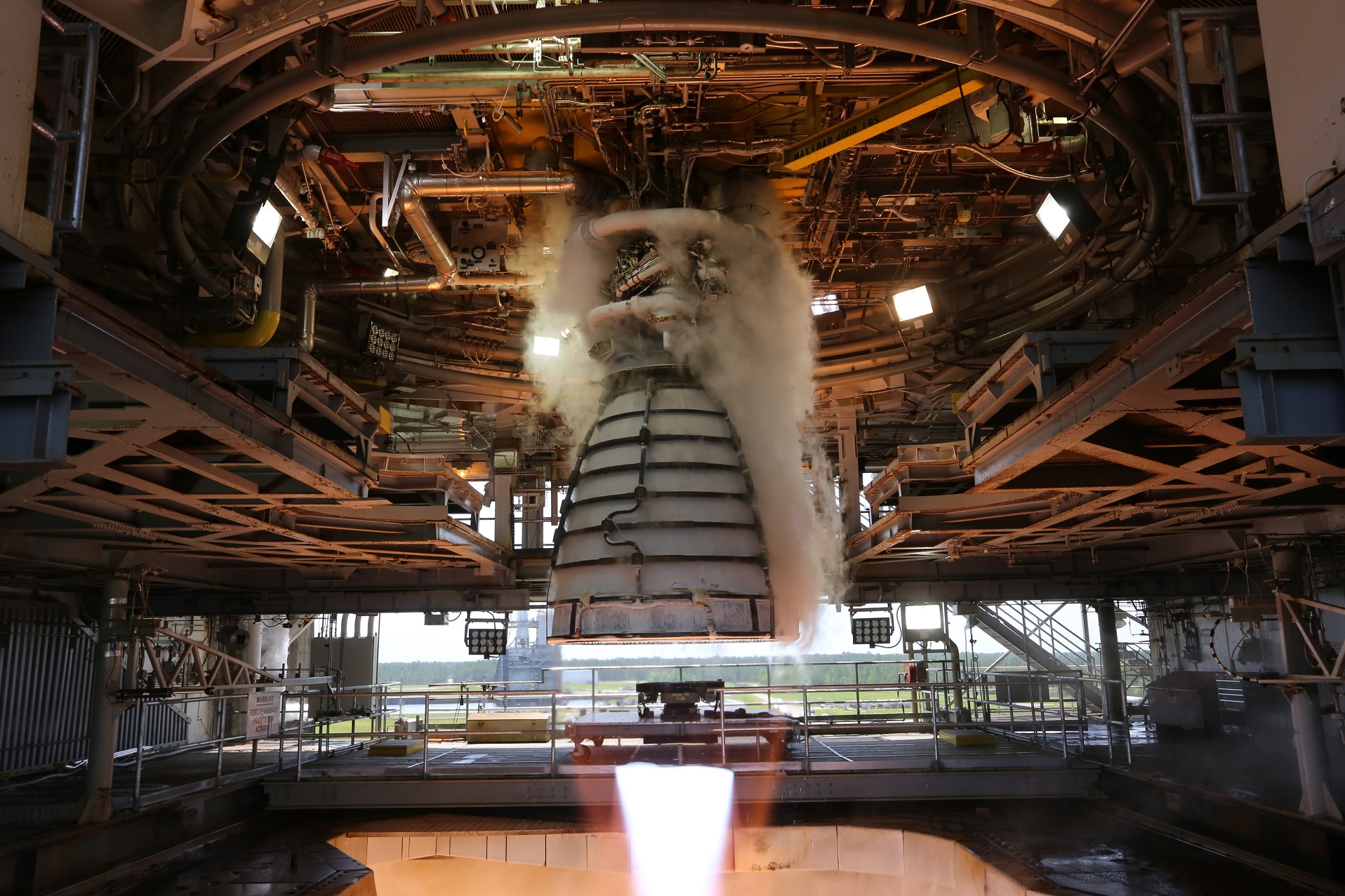 “What you’ll see is that we were extremely successful. We completely destroyed previously held records of how you deal with a liquid hydrogen, liquid oxygen type engine and shattered this idea that these types of engines can’t be used in a very operable and very aircraft-like way.”

The demonstration test series began with a 100-second test firing in the A-1 test stand at Stennis on June 26 and was successfully completed on July 6. “We scored a perfect ‘ten’ last week,” Jeff Haynes, Aerojet Rocketdyne’s Program Manager for AR-22, said.

“We broke down the ten days into 240 hours, that’s from the start of the first test to the end of the last test and we had sixty-eight minutes to spare when we finished the last test.”

The test team worked around the clock to accomplish the objective, dodging both typical Summer thunderstorms and more organized, tropical system-like weather.

“We did have Mother Nature intervene on a couple of occasions where we had two very direct lightning strikes to the test facility,” Haynes noted. “Those resulted in some level of damage to the facility that we had to scramble and repair to stay on track to complete the test series.”

“Which we did,” he added, “and that’s really a testament of the blended test approach team that we had with NASA, the S3 (Syncom Space Services) contractor, DARPA, and Aerojet Rocketdyne all pulling together with two twelve-hour shifts round the clock 24/7 to get this done.” 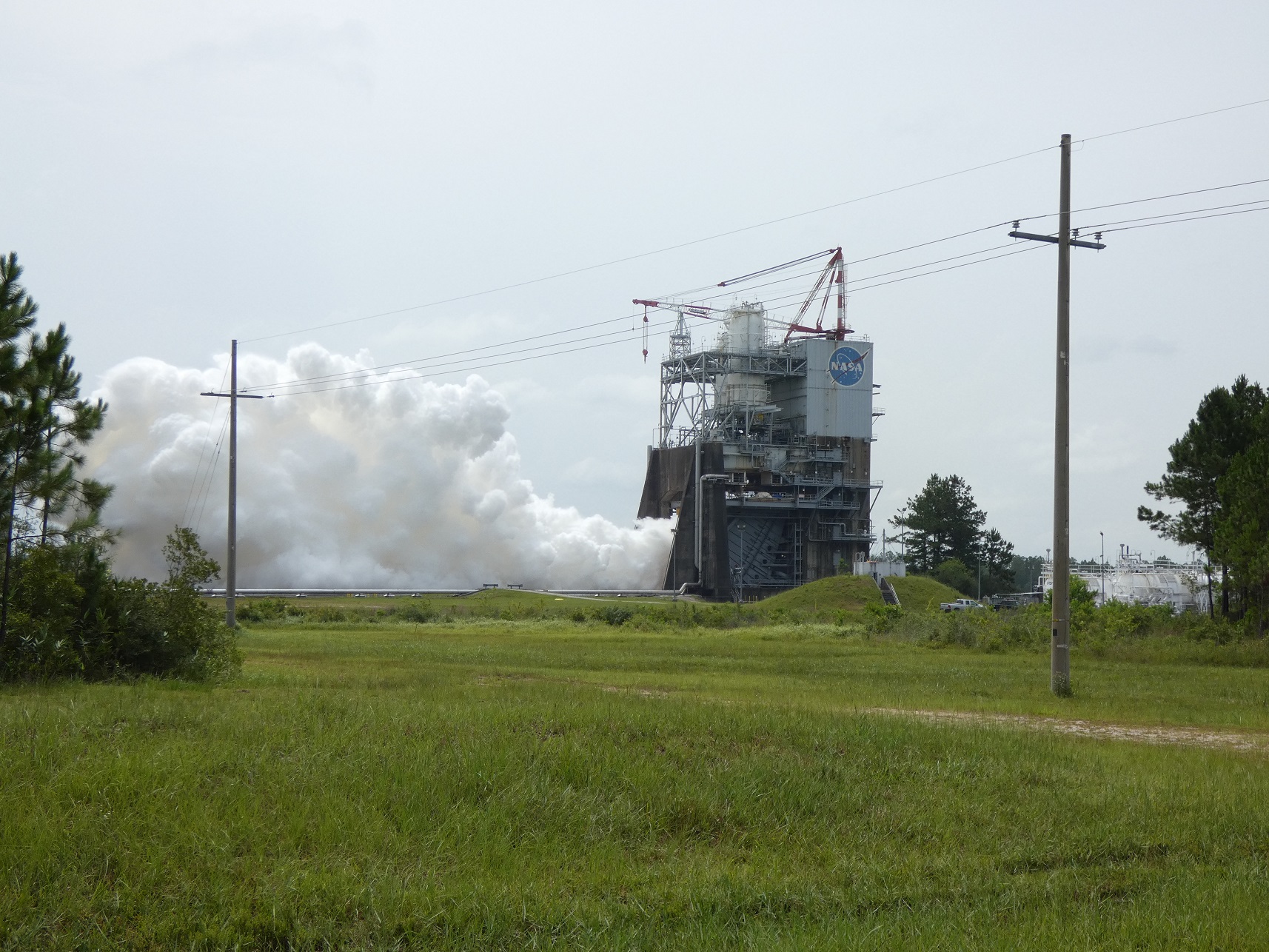 Haynes also noted that the average turnaround time between tests was about eighteen and half hours, with the shortest time being seventeen hours from one test to the next.

The primary challenge to restarting the engine so quickly following last use was drying out all the hardware. “When we test fire the engine it generates a large amount of moisture within the internal cavities of the engine and trying to run the engine again without drying that out would lead to catastrophic events,” Haynes explained.

“So when we initially looked at drying the engine, it took about seventeen hours so the team got together and did some pretty innovative concepts and ideas to get it down. One of the test series we got as low as six hours to get it completed through drying and out to inspections.”

“This vehicle due to the turnaround time, we did limited inspections,” Haynes added. “We did do some borescope [inspections], we did some torque checks on some of the turbomachinery, and we did nozzle leak checks and things like that, but we did not do the typical Shuttle profile of pulling the pumps from the engine and doing a detailed inspection in that regard.”

“We have significant instrumentation that allows us to know when we are getting into issues and we have redlines that allow us to abort in that scenario, so we felt running this up to those points would be sufficient and it was successful, so that is the approach we’re taking going forward.”

During the Space Shuttle era, the engines would typically run for around eight minutes in flight and for similar durations in ground testing; for this rapid turnaround test series, the AR-22 was fired for 100 seconds per test. 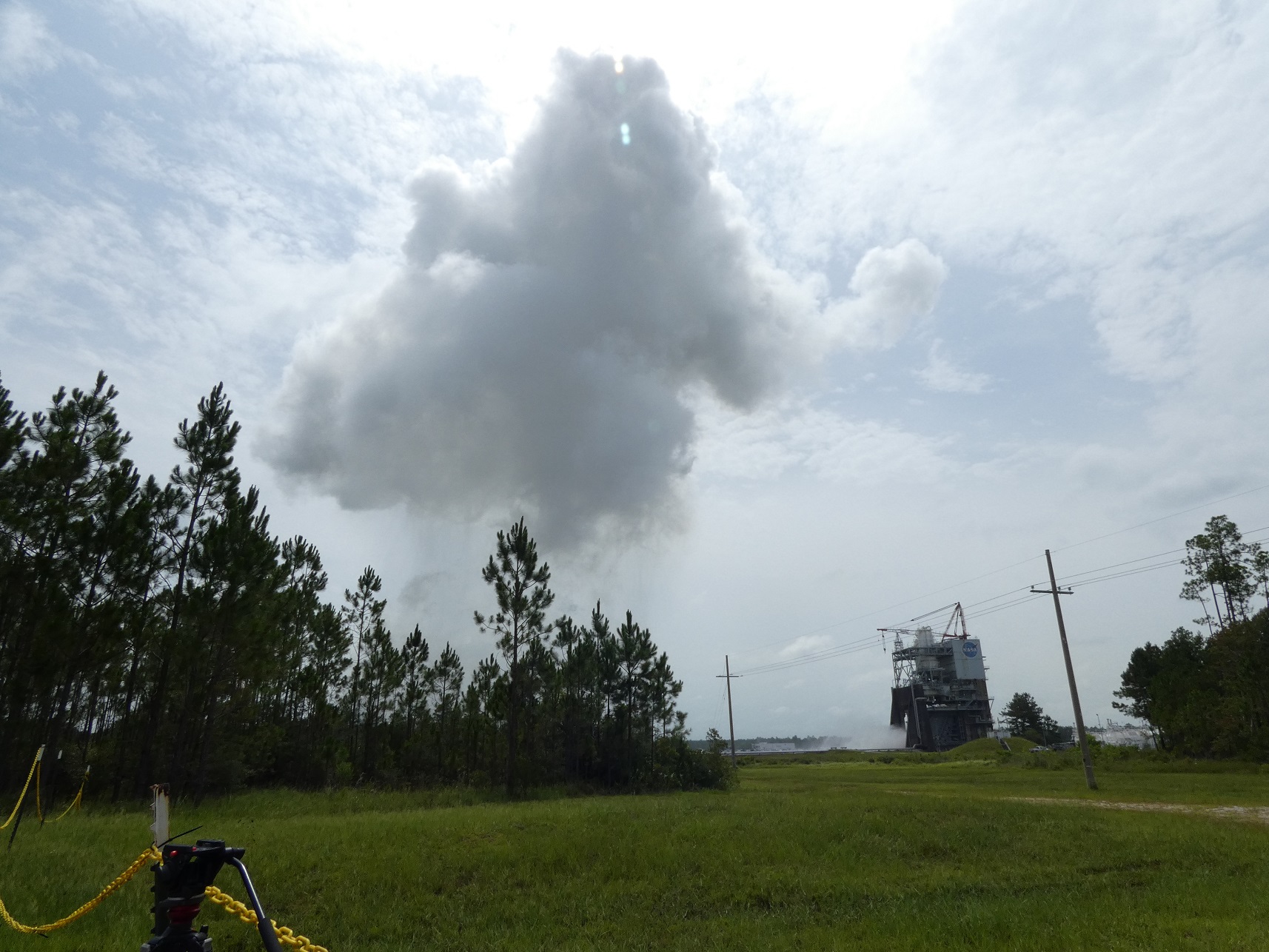 For the test-series, the engine went through a simpler throttle profile than Shuttle for the shorter tests. “We would start to 100 percent thrust and then throttle down typically to about 90 percent,” Haynes said.

“This vehicle, the Phantom Express, only required that level of performance out of this singular engine to achieve the mission profile. We were able on the last test to throttle to 80 percent, which at sea-level there are some challenges with going below that because of the way atmospheric pressure occurs on the engine.” Throttling down below 80 percent thrust at sea-level would cause damaging flow separation in the nozzle.

For XSP flights, the engine run-times will vary based on the performance needed for the payload. “Every mission, trajectory, and profile is going to be a little bit different, but generally less than half the amount of time it would run for a Shuttle ascent,” Steve Johnston, Boeing Phantom Works Launch Director, said. “So on the order of three minutes or so, in that ballpark.”

The last hot-fire test ran for an additional forty-seven seconds to demonstrate a new capability developed by Aerojet Rocketdyne that could allow engines to recover from some failure conditions rather than triggering an immediate abort and shutdown.

“We introduced a health management system that is new to this engine, it’s called Advanced Anomaly and Command and Control Center, AC3,” Haynes explained. “We actually tricked the engine into thinking it was experiencing a red-line condition, which under the Shuttle program would have been an immediate shutdown of the engine.”

“We allowed our new software to throttle down the engine automatically, assess the situation, and then do a step-wise recovery of the thrust profile in a matter of seconds to get back to the full throttle. So the engine accomplished this and we were able to keep the engine running, which for this vehicle would be an important reliability feature to have.”

Boeing’s Phantom Works Division is the prime contractor for the Phantom Express. The glideback booster will weigh approximately 240,000 pounds when fueled. It is designed to be able to carry an expendable upper stage up to speeds between Mach 5 and Mach 10.

DARPA’s requirement is for the system to be able to deliver at least 3000 pounds to orbit. “We are targeting a little bit more capability than that — our current estimate is about 5000 pounds,” Johnston noted. “Our payload performance varies depending upon what orbital inclination you’re flying, so it varies from three to five-thousand pounds depending upon what altitude and inclination you’re targeting.” 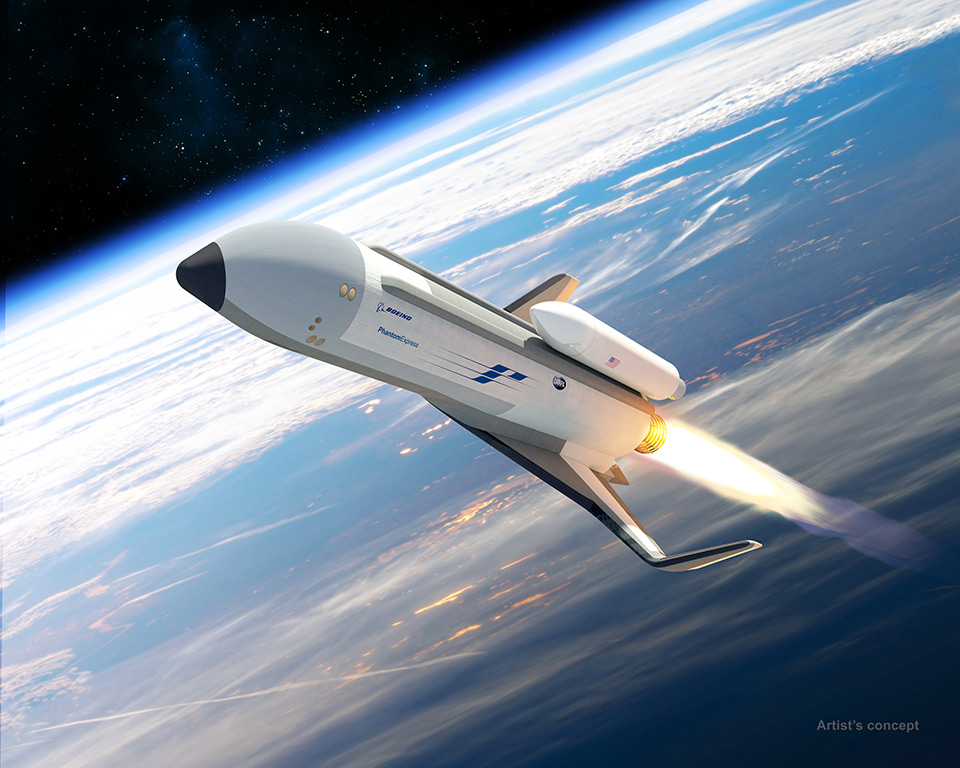 The rapid turnaround engine demonstration was a major test in Phase 2 of the program, which continues with design and construction of the booster vehicle and integration of the expendable upper stage. Phase 3 will see flight testing of the system, beginning with test flights of the booster itself, then carrying payloads.

Phase 3 is planned to include a similar rapid turnaround demonstration of the vehicle, flying it and turning it around ten times in ten days.

Fabrication of vehicle subassemblies is already underway, with tank construction going on in the Seattle, Washington, area. “This is a collaborative effort within Boeing between our defense and commercial airplanes and our enterprise technology business,” Johnston said.

“The same facility up in the Puget Sound area that developed the original technology for the 787 composite fuselage sections is currently fabricating for us our liquid oxygen tank. That liquid oxygen tank is complete through layup and cure, it’s going through inspection now.”

“The next step after that will be the development of our liquid hydrogen tank and with those two things combined we’ll have about two-thirds of the length of the vehicle fabricated,” he added. In addition, construction of the wings is going on in at Boeing facilities in St. Louis, and software is being developed at facilities in Southern California.

“After that we’ll enter into assembly, integration, and test of the vehicle starting in the middle of next year and we intend to conduct our first flight in 2021.”  Still to be decided by Boeing are the locations of vehicle final assembly and launch and landing operations.

For XSP, the decision was made to use the SSME design like other “off-the-shelf” parts. “All of the hardware that comprised this engine was previously flown hardware,” Haynes said.

“The scope of this program was not to design or augment or improve the hardware design, it is flight-proven hardware that we took from different engines and assembled it into this single engine for this test series. And that’s the approach going forward.” 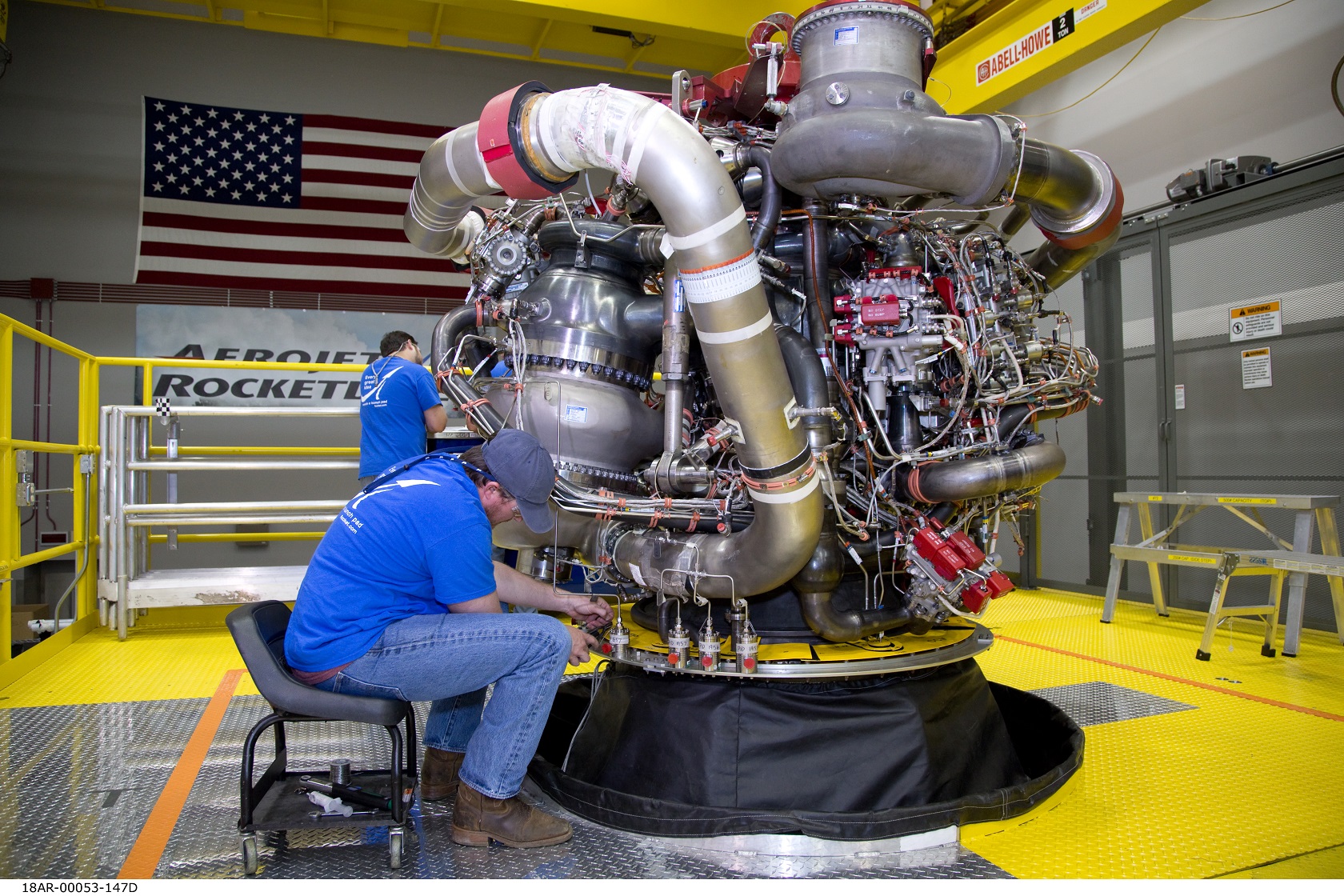 The one exception to using heritage hardware on the AR-22 is the engine is using new engine controller units (ECU) already developed by Honeywell for use on the Space Launch System (SLS).

“Early in the program we had to make a decision if we went with the legacy controller or the new Honeywell upgraded controller for SLS,” Haynes said. “We made that decision to go with the Honeywell new controller and we were able to acquire a loan agreement from the NASA program, SLS, to loan that to us to use for this.”

SLS is using a separate derivative of the SSME called the RS-25, which is undergoing new development to build new engines more affordably for expendable use. “SLS is using Block II hardware, so they are exclusively limited to that design configuration of the engine,” Haynes noted. 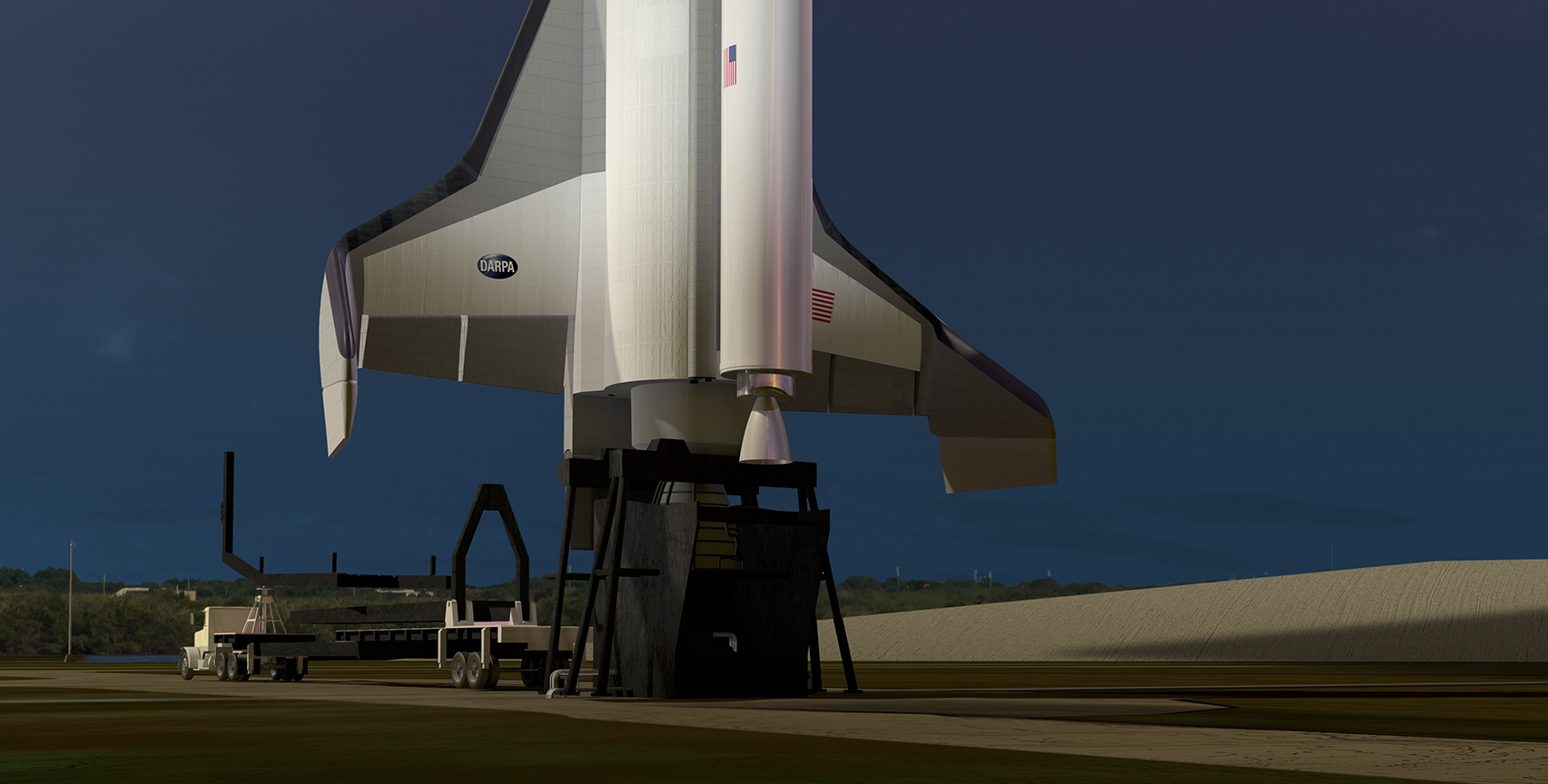 “This engine [AR-22] is not limited to Block II, we have the flexibility to pull in prior engine design capability and put that into the engine build for this particular engine. There’s assets available to us that SLS does not have available to them.”

“We have access to hardware to assemble a number of engines for this program, we have two planned and there’s multiple replications of that that are capable,” he added.

The SSME went through a series of upgrades through the decades that allowed it to be certified for reuse in an expanded operating range; in contrast, the AR-22 is intended to operate at the original 1970s SSME rated power level (RPL) of 375,000 pounds thrust at sea level, 470,000 pounds thrust at vacuum, referred to as 100 percent. “We have flight demonstrated capability with fleet leader experience on different components of this engine, this nozzle for example had fifty-seven starts on it, so we’re looking at the compiled engine capability,” Haynes noted. 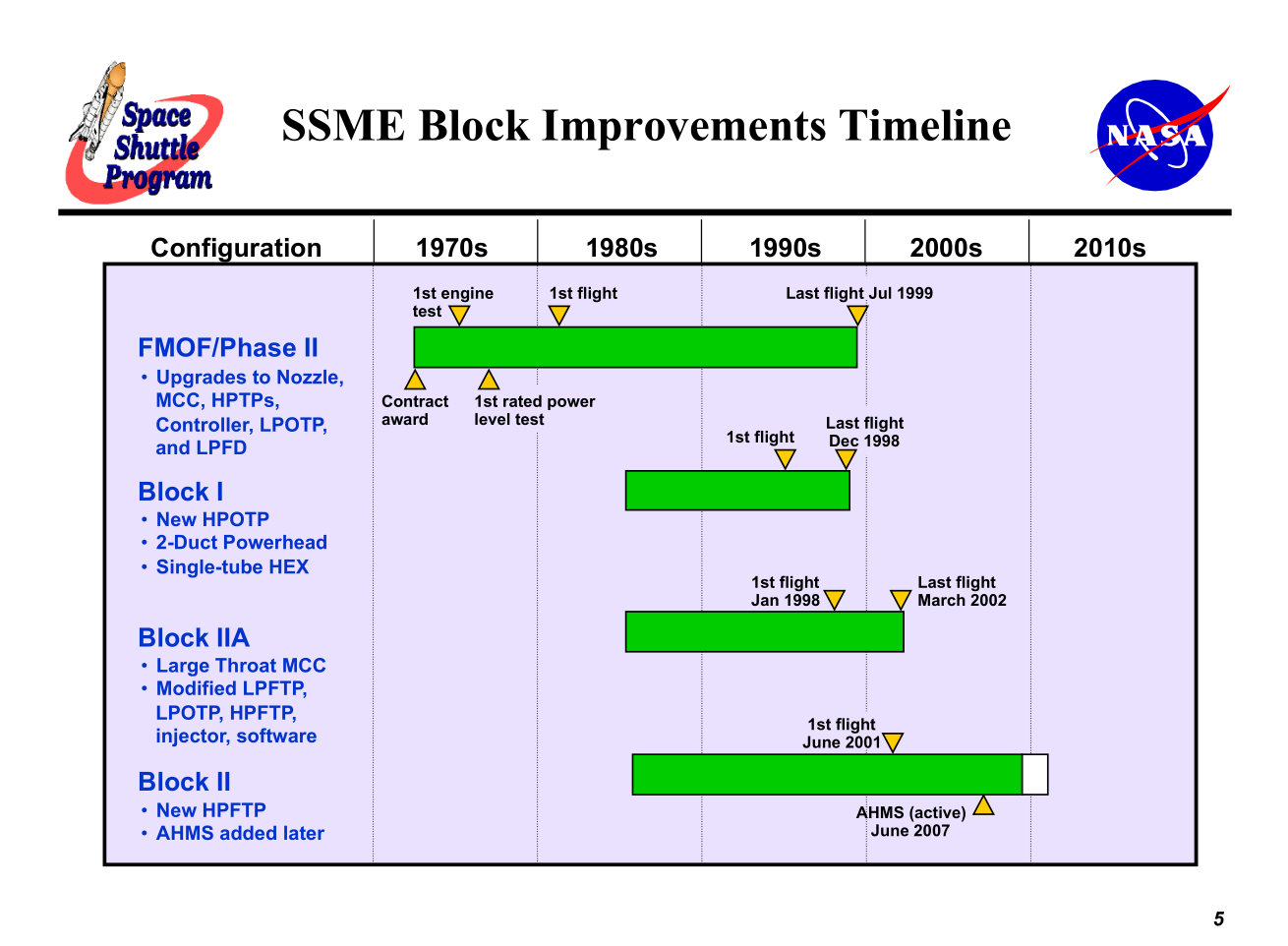 “Running it at 100 percent power level or less actually gives us a lot of margin in that regard. Shuttle ran at 104 and a half [percent] and up to 109, so running at the lower power levels we’re looking at the extension of the fleet leader overhaul and repair intervals that we have on the engine right now.”

The second engine is intended to fly on the Phantom Express vehicle, with the first retained as a backup. Next year, it will go into the A-1 stand for two hot-fire acceptance tests to verify the hardware is ready for integration with the vehicle.