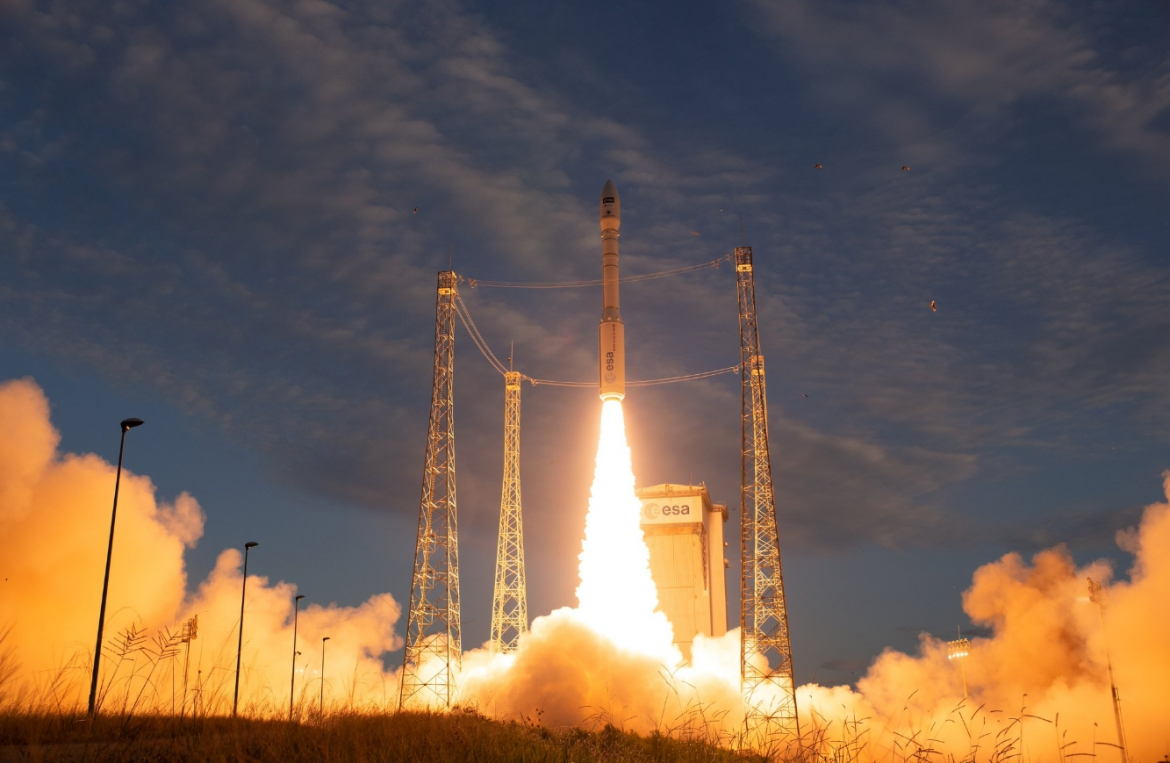 Aeolus, also known as the Atmospheric Dynamics Mission (ADM) or ADM-Aeolus, is part of the European Space Agency’s (ESA’s) Earth Explorers program which will also contribute to the World Meteorological Organization’s Global Observing System (GOS). Equipped with a Doppler lidar instrument, Aeolus will build a profile of winds in the Earth’s atmosphere below 20 kilometers (12 miles, 11 nautical miles): a range of altitudes covering the troposphere and the lower reaches of the stratosphere.

The Aeolus satellite was constructed by Airbus Defence and Space. Its design is derived from a platform originally developed for the Mars Express spacecraft, which has been orbiting the red planet for over fourteen years. Aeolus will have a mass at launch of 1,357 kilograms (2,992 lb) and is designed for a three-year operational lifespan.

Aeolus is three-axis stabilized and will operate in a low circular sun-synchronous orbit – at an altitude of 320 kilometers (199 miles, 173 nautical miles) and an inclination of 96.7 degrees to the equator. 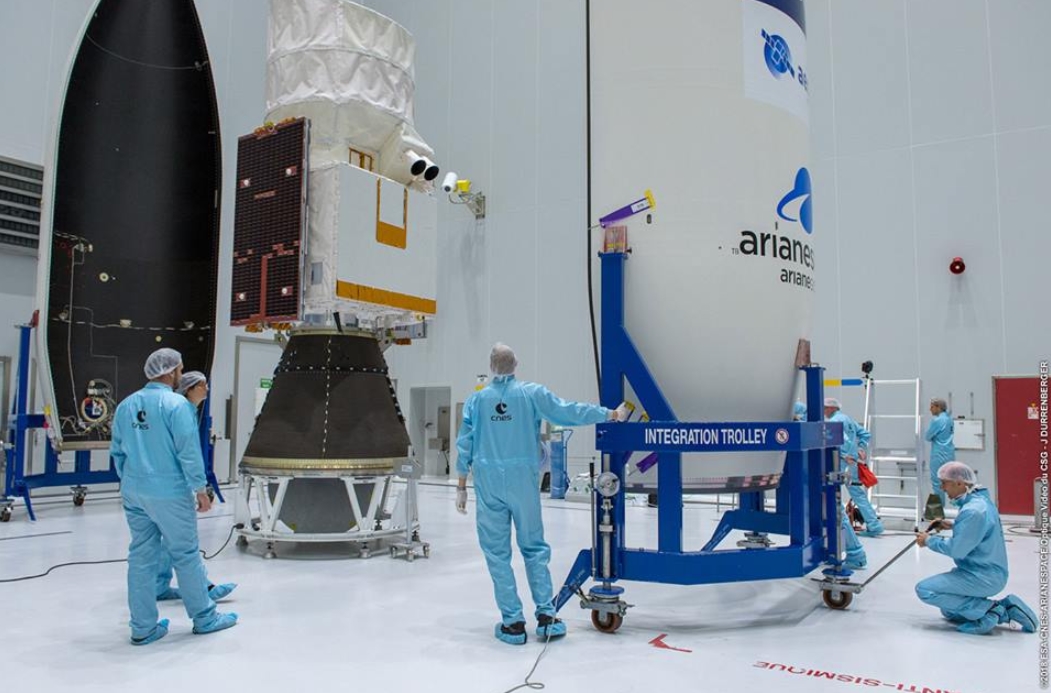 The spacecraft during encapsulation – via Arianespace

The launch of Aeolus comes over ten years behind schedule, the result primarily of complications during the development of the satellite’s lidar system. Development of the spacecraft began in 2003, with launch then scheduled for 2007. The EarthCARE mission, which also carries a lidar, was hit by similar delays and is now expected to fly next year.

Aeolus is also known as Earth Explorer 4, the fourth mission to be commissioned as part of the Earth Explorers program, dedicated to understanding the planet Earth and its climate. The preceding missions in the series were the Global Ocean Circulation Explorer (GOCE) and Soil Moisture and Ocean Salinity (SMOS) – both launched in 2009 – and CryoSat.

The original CryoSat satellite was lost in a launch failure of its Rokot/Briz-KM carrier rocket in 2005. However, a replacement – CryoSat-2 – was deployed by a Dnepr in 2010. With the delays to Aeolus, Earth Observer 5 has launched ahead of it. The three-satellite Swarm constellation was deployed by a single Rokot vehicle in November 2013.

ESA divides its Earth Explorer missions into two categories – Core and Opportunity – with Opportunity missions typically designed to be lower-cost missions reacting to immediate scientific requirements while Core missions are developed in close cooperation with the wider scientific community to answer specific questions about our planet.

The instrument fires ultraviolet laser pulses at a wavelength of 355 nanometres – invisible to the human eye – towards the Earth.

As the light emitted by the laser passes through the atmosphere some photons interact with particles in the atmosphere, causing them to be deflected – or scattered – in other directions. ALADIN incorporates a 1.5-metre (5-foot) telescope to collect light that is backscattered – that is, deflected back towards its source. 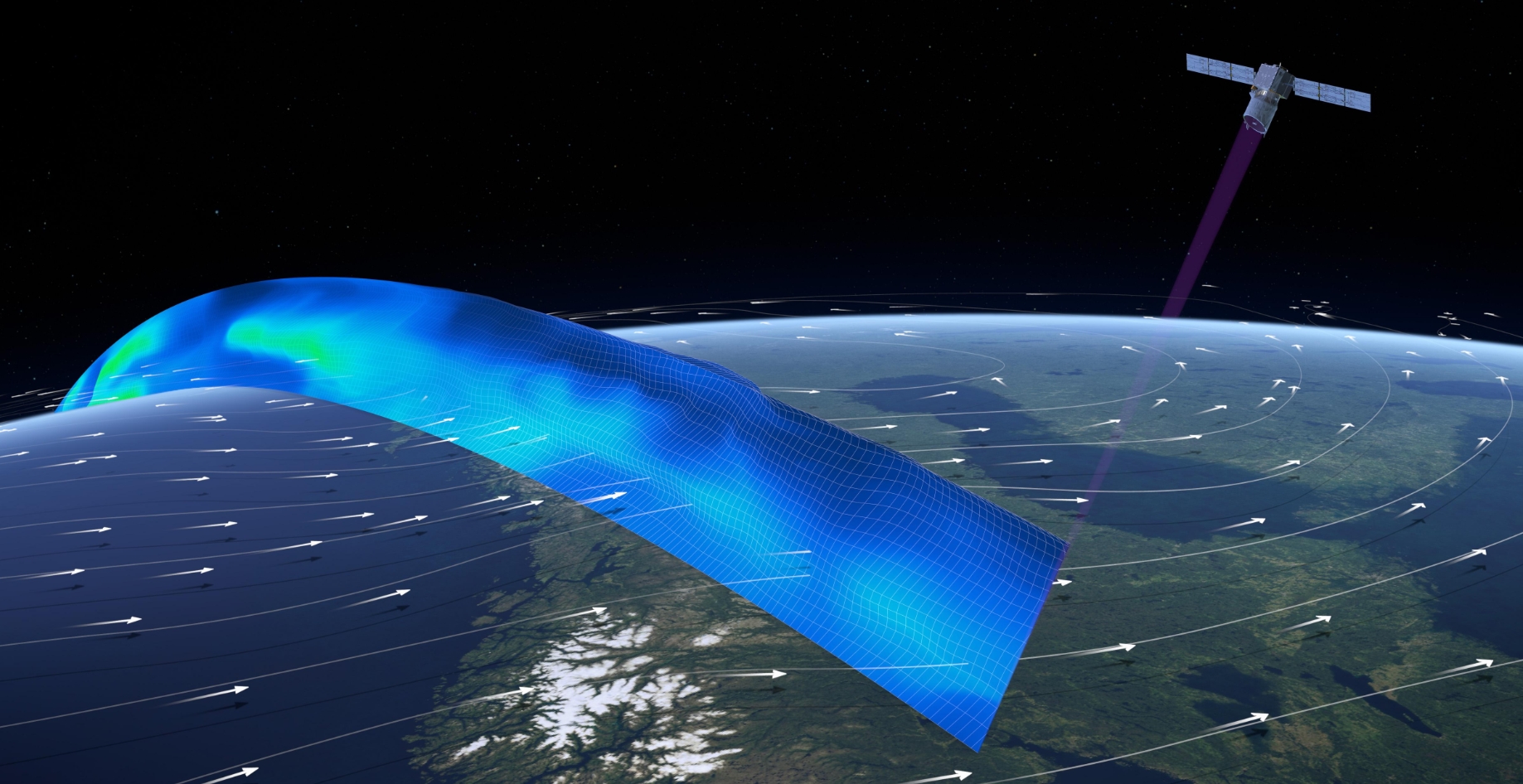 Aeolus at work – via ESA

The satellite will be able to measure several properties of the backscattered photons to understand what has happened to them in the atmosphere. From the time between emission of a light pulse and the photons being received back by the satellite, ALADIN can determine how far the pulse traveled, and therefore the altitude at which the photons were scattered.

The photons will be passed through a spectrometer to build a profile of their wavelengths compared to that of the original light, and the shape of the curve this produces can be used to determine how they were scattered.

Light emitted by ALADIN will be affected by two different types of scattering: if they interacted with gaseous molecules in the air the curve will show evidence of Rayleigh scattering, whereas if they interacted with water droplets in clouds or with aerosols the curves will show that Mie scattering took place. Wind in the atmosphere will cause a Doppler shift in the wavelength of the light, proportional to the speed of the wind.

ALADIN is oriented perpendicular to the satellite’s direction of flight, away from the sun, with the instrument angled downwards – 35 degrees from the vertical – in order to build up a profile of wind speeds over a strip of the atmosphere as the spacecraft orbits. A single observation will last seven seconds, consisting of 700 pulses, during which time the satellite will travel 87 kilometers (54 miles, 47 nautical miles). There will be a gap of 21 seconds between observations. ALADIN can penetrate thin layers of cloud but cannot observe through thick cloud cover. 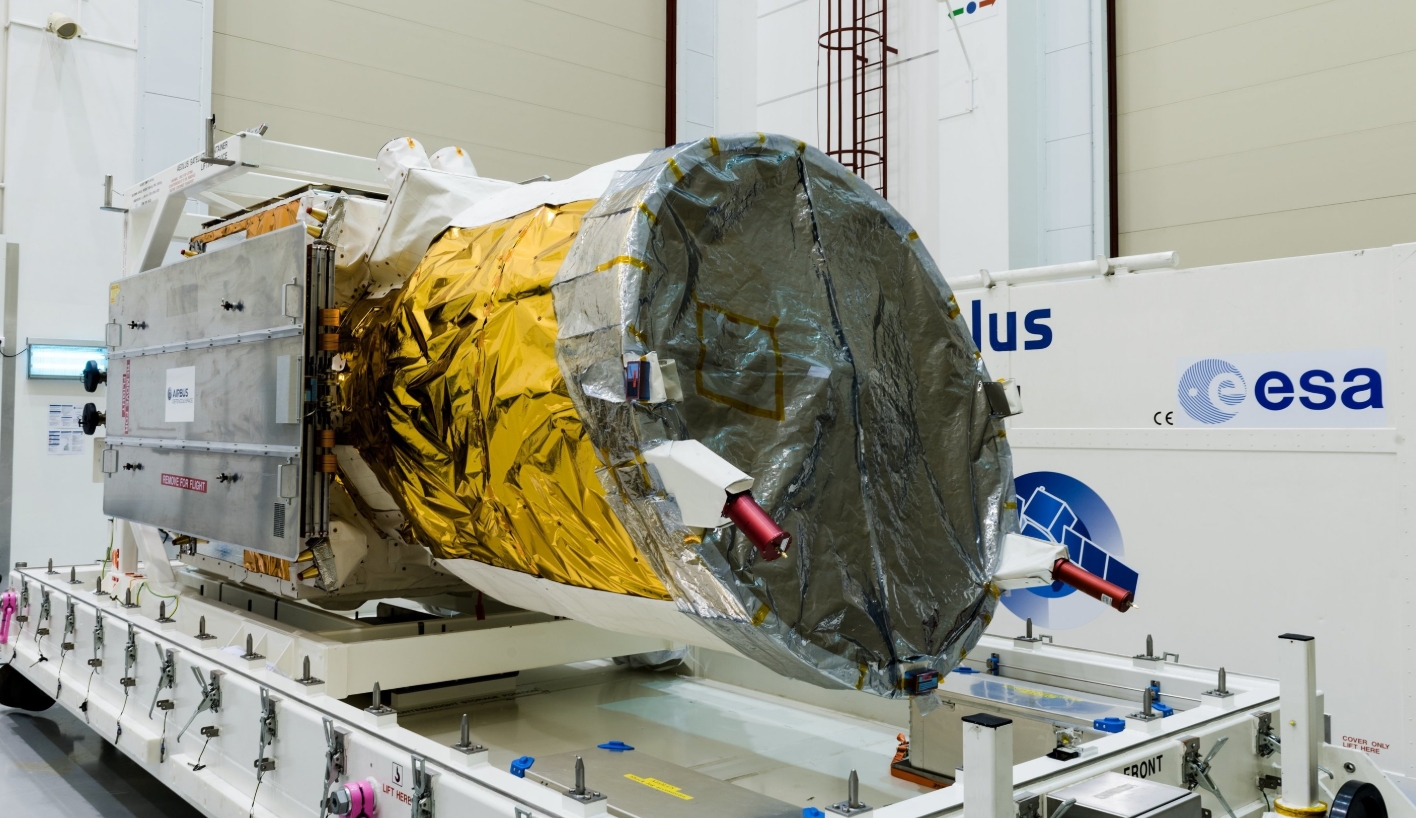 The ALADIN instrument via Airbus Defence and Space.

ALADIN is the only primary scientific instrument aboard Aeolus – although the satellite carries other instruments to aid attitude control and orbit determination. These include the Satellite-to-Satellite Tracking Instrument (SSTI), which uses US Global Positioning System (GPS) navigation satellites to determine the spacecraft’s position in orbit, laser retroreflectors to help observers on the ground track Aeolus and Earth-Sun sensors, star trackers and a magnetometer to keep track of its attitude.

Aeolus flew to orbit atop a Vega rocket. The smallest of the three rockets operated by Arianespace, Vega is a four stage rocket using mostly solid propellants, which first flew in February 2012. The mission is its twelfth flight – with all of the rocket’s previous launches having been successful.

Vega launches take place from the Centre Spatial Guyanais in Kourou, French Guiana. The rocket’s launch complex, the Zone de Lancement Vega (ZLV), was built on the site of the former Ensembele de Lancement Ariane 1 (ELA-1) launch pad which was used by twenty-five Ariane 1, 2 and 3 rockets between 1979 and 1986. An even earlier launch pad on the site, CECLES, had been used for a single launch of the Europa II rocket – an earlier European satellite launch project under the European Launcher Development Organisation (ELDO) – which failed in 1971. Overall, the launch will be the thirty-eighth from the three pads that have stood on this site. 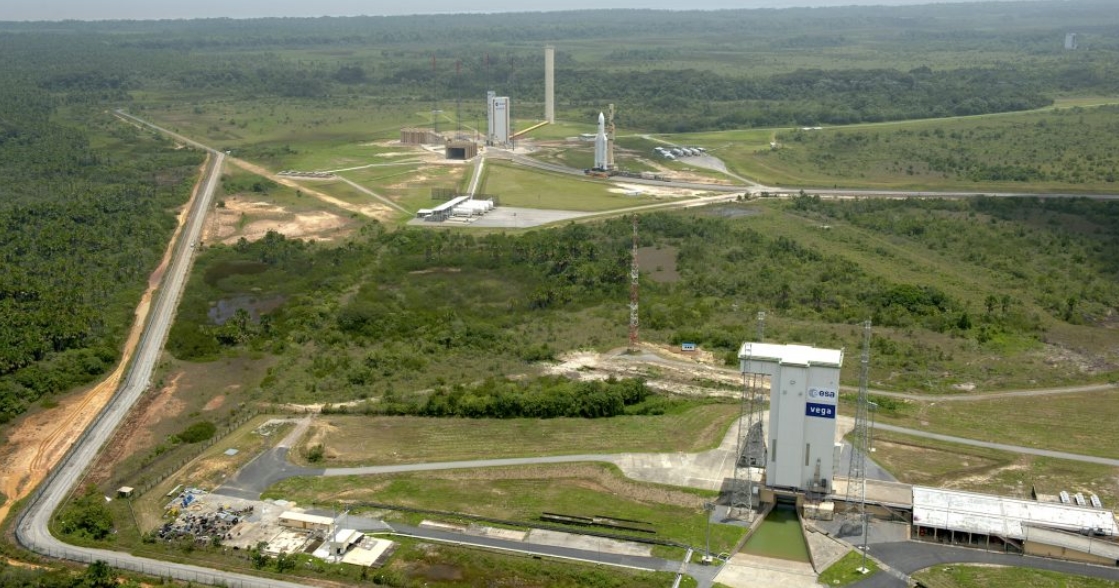 In preparation for its flight, the Vega rocket was assembled vertically in position at the launch pad. The launch campaign began on 4 July when Vega’s first stage – a P80 solid rocket motor – was transported to the launch pad. The interstage between the first and second stages was fitted on 12 July, with the Zefiro 23 second stage being mounted atop this structure the next day. On 16 July the Zefiro 9 third stage was added to the rocket, with the fourth stage – Avum – joining the vehicle on 24 July.

While integration of the rocket was ongoing, Aeolus – which had arrived in Kourou on 28 June – underwent its own preparations for launch. Following electrical checks, fuelling of the satellite began on 26 July. Between 2 and 7 August the satellite was encapsulated within Vega’s payload fairing, which was transported to the launch pad on 9 August and integrated with the rocket the next day. Fuelling of the Avum stage took place over four days the next week, followed by a launch rehearsal, arming of the rocket and final preparations and inspections.

The countdown for Vega’s launch began nine hours and ten minutes before the rocket was due to lift off. As the clocks ticked towards zero the rocket’s systems – including the inertial reference system (IRS), multi-functional unit (MFU) and onboard computers were brought online and tested. Three hours and fifteen minutes before liftoff the mobile gantry used to assemble and access the rocket was retracted away from the vehicle – a process that took about three quarters of an hour to complete.

Once the gantry had reached its retracted position, the rocket’s inertial reference system was aligned, and its communications and telemetry systems activated. The final four minutes of the countdown are the “synchronized sequence”, where computers control all operations. With the launch targeting an instantaneous opportunity, any hold in the countdown would have resulted in a scrub, and at least a 24-hour delay.

Once the countdown reached zero, the P80 solid rocket motor powering Vega’s first stage ignited and the rocket lifted off. The P80 burned for one minute and 54 seconds, propelling the rocket to a velocity of 1.78 kilometers per second (3,980 miles per hour) and an altitude of 53 kilometers (33 miles, 29 nautical miles).

The first stage separated at burnout, with the second stage igniting its Zefiro 23 motor almost immediately for a one-minute, 43-second burn. Ignition of the third stage Zefiro 9 motor came fourteen seconds after the second stage burned out and separated – with this stage firing for two minutes and 34 seconds before it also separated. About five seconds into the third stage burn, Vega’s payload fairing separated from the nose of the rocket, exposing Aeolus to space for the first time.

Vega’s fourth stage, Avum, uses liquid propellant and can be shut down and restarted in flight. It made three burns during Wednesday’s launch – two before spacecraft separation, with a third burn to deorbit itself after successfully deploying Aeolus. Avum is powered by a Ukrainian RD-843 engine, derived from engines that the Yuzhnoye Design Bureau and Yuzhmash production plant developed for the third stage of the Soviet Union’s R-36 family of intercontinental ballistic missiles.

Avum’s first burn began at eight minutes and three seconds mission elapsed time – 93 seconds after it separated from the third stage. This burn lasted eight minutes and 34 seconds, injecting itself and Aeolus into an initial parking orbit. The second burn was conducted after a thirty-six-minute, twenty-nine-second coast in order to place the satellite into its planned circular orbit. The second burn lasted just twenty-three seconds, with spacecraft separation coming 88 seconds later – fifty-four minutes and fifty-seven seconds after liftoff.

About fifty minutes after spacecraft separation, Avum made its third burn to deorbit itself, ensuring that no unnecessary debris was left in orbit from Wednesday’s mission.

This launch was the fifth of the year for Arianespace but the first to use a Vega. Arianespace’s next launch is scheduled for 7 September, with an Ariane 5ECA due to deploy the Horizons 3e and Intelsat 38 communications satellites for Intelsat. The next Vega mission is currently slated for December with the Italian Space Agency’s PRISMA satellite aboard.