Orion elements coming together for EM-1 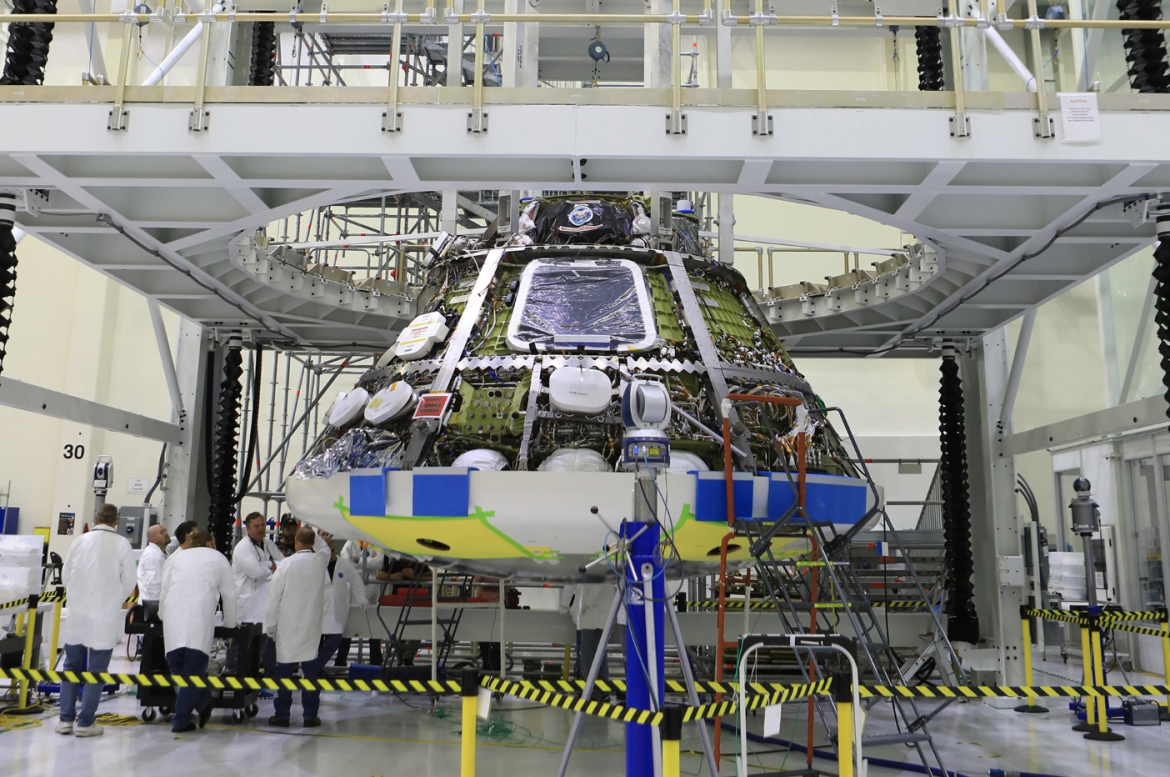 At a recent media event, NASA’s Orion Program Manager provided a brief update on development and preparations for Exploration Mission-1 (EM-1). Mark Kirasich ran through some of the current status of the EM-1 spacecraft elements that, once assembled and checked out, will make the cislunar test flight currently forecast for mid-2020.

The three-to-six week EM-1 lunar orbit mission will exercise most of Orion’s systems together for the first time, with the exceptions of a live Launch Abort System (LAS) and Environmental Control and Life Support Systems (ECLSS).

Preparations for EM-1 are nearing the major milestone of the first European Service Module (ESM) being shipped to the Kennedy Space Center (KSC), but NASA and its contractors still have work to complete with the ESM and the Crew Module (CM) and issues to work out before the first deep-space Orion spacecraft can be put together early next year in Florida.

EM-1 is a first flight for most of NASA’s current human exploration programs. Orion will be flying for the first time with a live Service Module, enabling the multi-week flight into a Distant Retrograde Orbit (DRO) around the Moon. The spacecraft will be flying on top of the Space Launch System (SLS) booster’s first flight, which will also be the first launch from Exploration Ground Systems’ rebuilt launch operations infrastructure at KSC.

NASA, Orion prime contractor Lockheed Martin, and ESM prime contractor Airbus Defence and Space, are nearing the phase of preparations with the major elements of the spacecraft, the CM, the ESM, and the Crew Module Adapter (CMA), mated together. The CMA will first be mated to the ESM, forming most of the overall Service Module (SM), followed by the CM being mated to the SM.

Both the ESM and CM are getting close, but not there yet. “The crew module and ESA (European Space Agency) service module I would say are greater than ninety-six percent assembled,” Kirasich said during a short break in NASA Administrator Jim Bridenstine’s tour of the Michoud Assembly Facility (MAF) on August 13. “The service module has about three or four components yet to be installed and we’re working a valve issue on the service module.”

The critical path item driving the EM-1 schedule for Orion is still the first ESM, Flight Model-1 (FM-1); Airbus is working through functional testing of its standalone systems at its Assembly, Integration, and Testing (AIT) facility in Bremen, Germany, along with final pre-ship installations.

Recently, a nozzle was temporarily installed on the Orbital Maneuvering System-E (OMS-E) main engine at Bremen as a part of functional testing of the Thrust Vector Control (TVC) system. 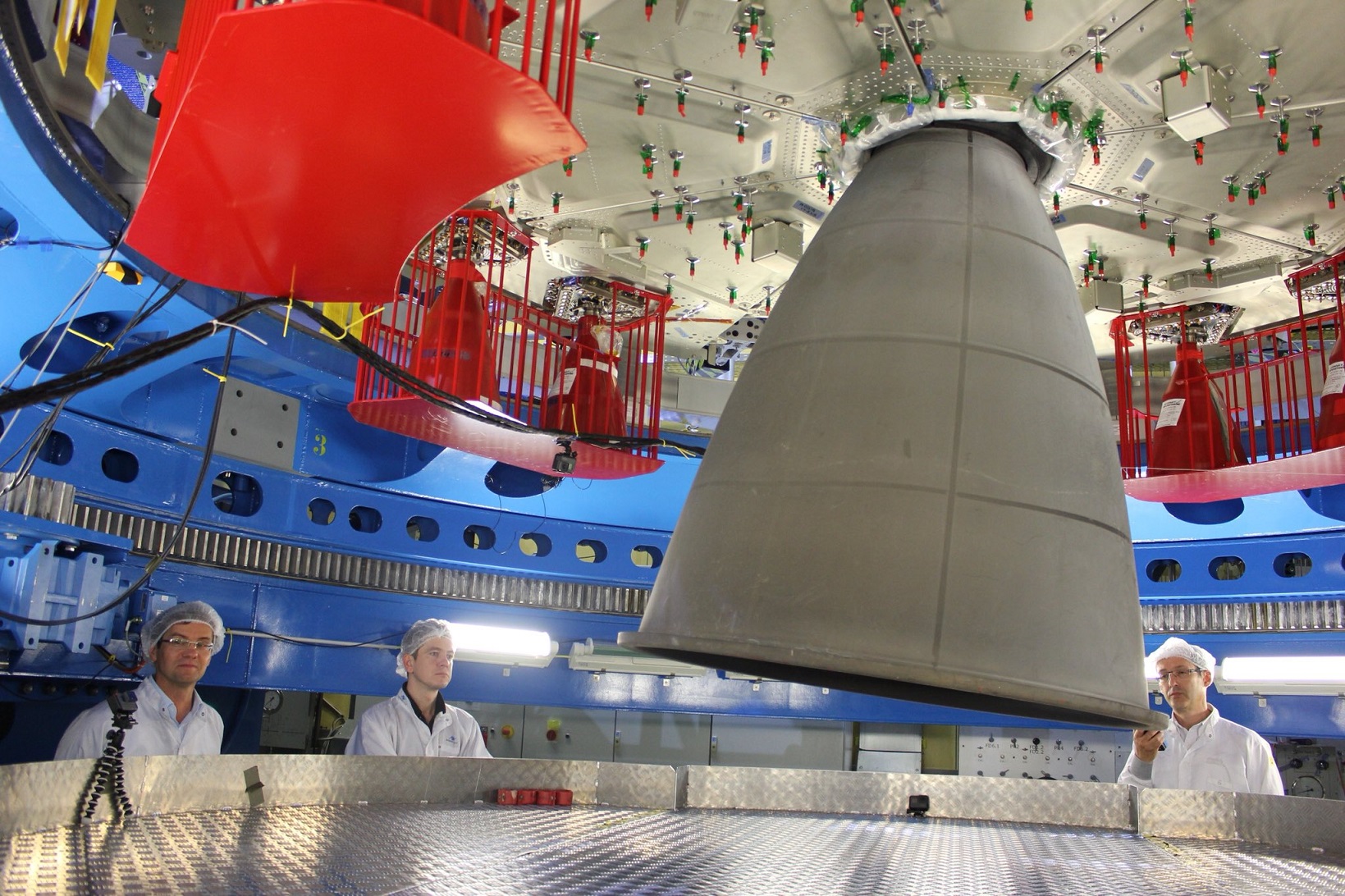 A nozzle attached to the OMS-E main engine is swiveled around the base of the first flight ESM during recent TVC functional testing at the AIT Airbus facility in Bremen. Three of the four sets of Auxiliary engines surrounding the main engine can be seen here, protected by ground covers. Credit: Airbus Defence and Space.

“Notwithstanding the valve issue, to get through those last three or four installations we’d be shipping about September 21st,” Kirasich noted. “We’re working feverishly on how do we correct the valve problem, and that could take a day, it could take a week, [or] it might take a little longer. So the valve problem is our toughest problem there.”

The valve issue was discovered during recent pre-test checkouts of the ESM Propulsion Qualification Module (PQM). “The valves are in the PQM test article and when we were acceptance testing the upgraded PQM was where we first identified the issue,” Kirasich explained. “And then we validated it’s on the flight hardware, too.”

As Mr. Kirasich noted, the schedule impact to the ESM FM-1 ship date is still to be determined.

Work in the Operations and Checkout Building at KSC by Lockheed Martin on the CM for EM-1 recently passed a major milestone with installation of the heatshield in late July. Kirasich said that there’s still some work remaining before the CM is ready to mate. “The crew module is the same thing, it’s greater than ninety-six percent done,” he said. 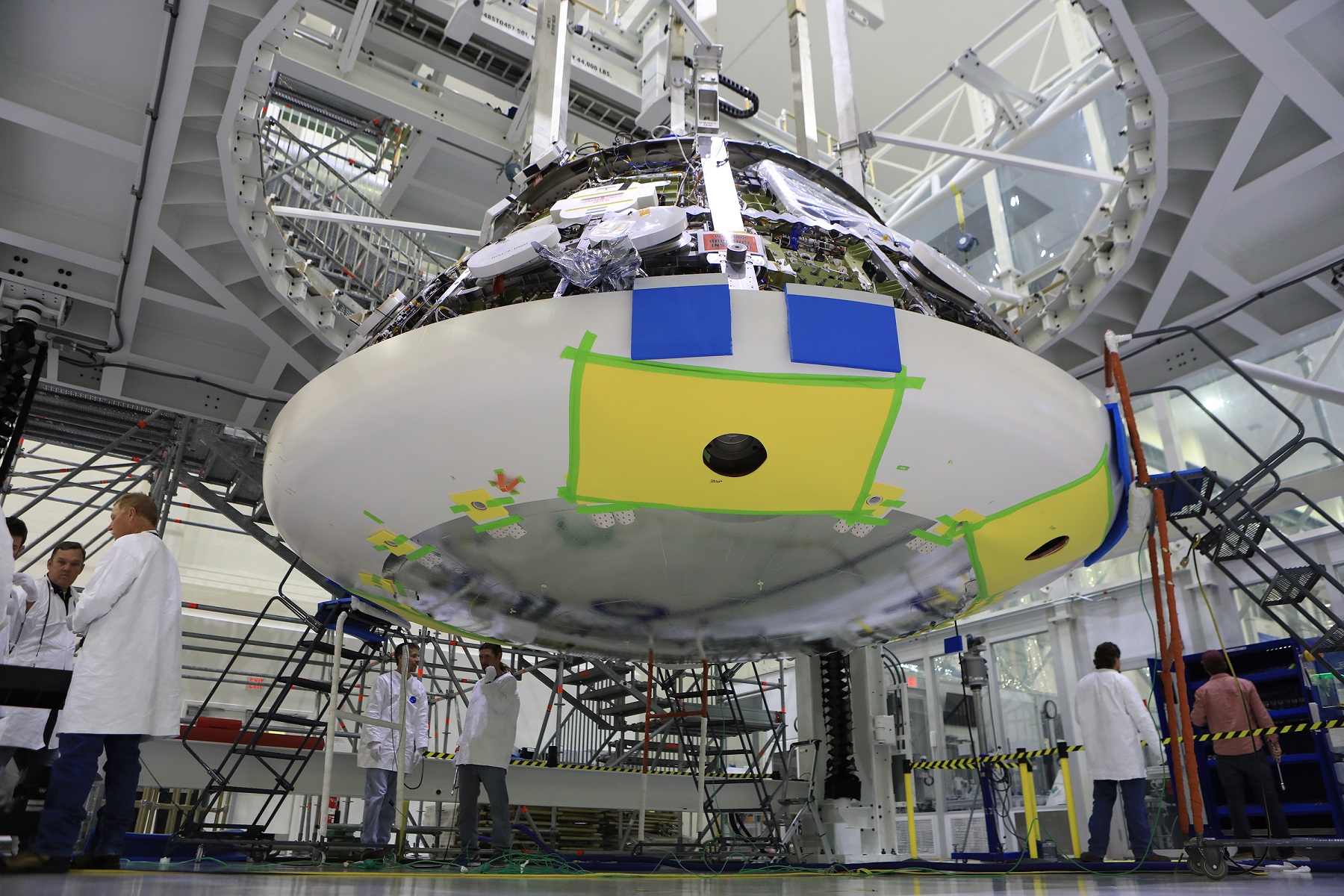 “With the crew module, really [what’s left is] the side hatch, which we weren’t planning to fly on EM-1. Initially, we were going to do it on EM-2 for the first time, but we had a little extra money. We shook out the sofa cushions a few years ago and it’s been on a fast track and because we started it late it’s been behind. So it will be our last component that shows up.”

Technicians are also still checking out CM systems. “We’re doing qualification of our components, our avionics boxes, after the flight components were installed,” Kirasich explained.

“Most of the components are passing qual but [with] a couple of them we identified some issues from qual so we had to pull those boxes, send them back to the factory for refurb, and we’ll get them back in the ensuing couple of months.”

The third major element, the CMA, is the least complex and it has already completed testing. “It’s ready and its avionics boxes are good,” he said.

While the flight hardware continues to be processed for mating, Orion still has major parts of its Design, Development, Testing and Evaluation (DDT&E) to complete in parallel with work to transition to more of a “production and operations” phase in flights beyond EM-2.

The structural test articles (STA) currently at Lockheed Martin are undergoing a series of tests in the different combinations they will see during flight. Those tests will continue into 2019. 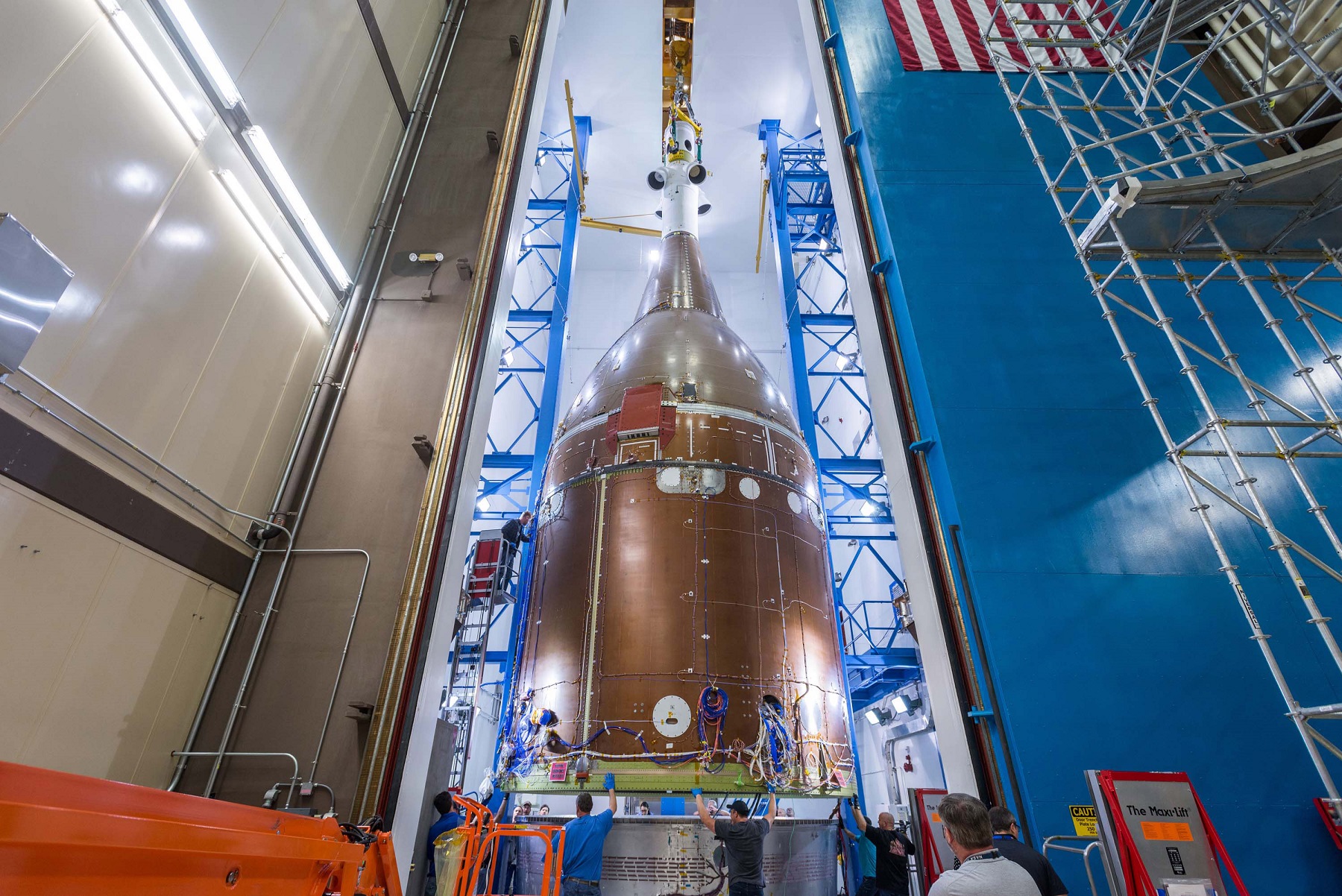 The full launch stack of structural test article (STA) elements for Orion in a test facility at Lockheed Martin Space Systems in Colorado. Most of the crew module and service module are covered by the Launch Abort System (LAS) hardware and other panels jettisoned during ascent. Credit: Lockheed Martin/Patrick Corkery.

At the White Sands Test Facility in New Mexico, the PQM is being checked out to resume testing next month. “We’re targeting September 12th,” Kirasich said. “We had to make about three major changes and a half dozen minor changes to the test article to make sure we don’t have that phenomenon again.”

One of the PQM’s RCS thrusters had a failure during an initial round of “blowdown” testing in August of last year. “We did blowdown testing because we didn’t have our pressure controller that regulates the pressures to the gas tanks,” Kirasich explained.

“We would pressurize the tanks and then we would burn, but you can’t burn very long that way. So we got the pressure controllers installed now [and] we’re about one month out.”

Kirasich was at MAF in New Orleans as a part of Administrator Bridenstine’s visit, which coincided with the completion of the pressure vessel for the EM-2 CM. Mr. Bridenstine was sworn in as NASA Administrator in late April and is currently making time to tour all of NASA’s centers and facilities.

Several of the items that Lockheed Martin processes at MAF were on display for the Administrator and for media observing the tour. The spacecraft adapter cone, a Spacecraft Adapter Jettisoned (SAJ) panel and a LAS ogive panel for EM-1 surrounded the EM-2 pressure vessel. 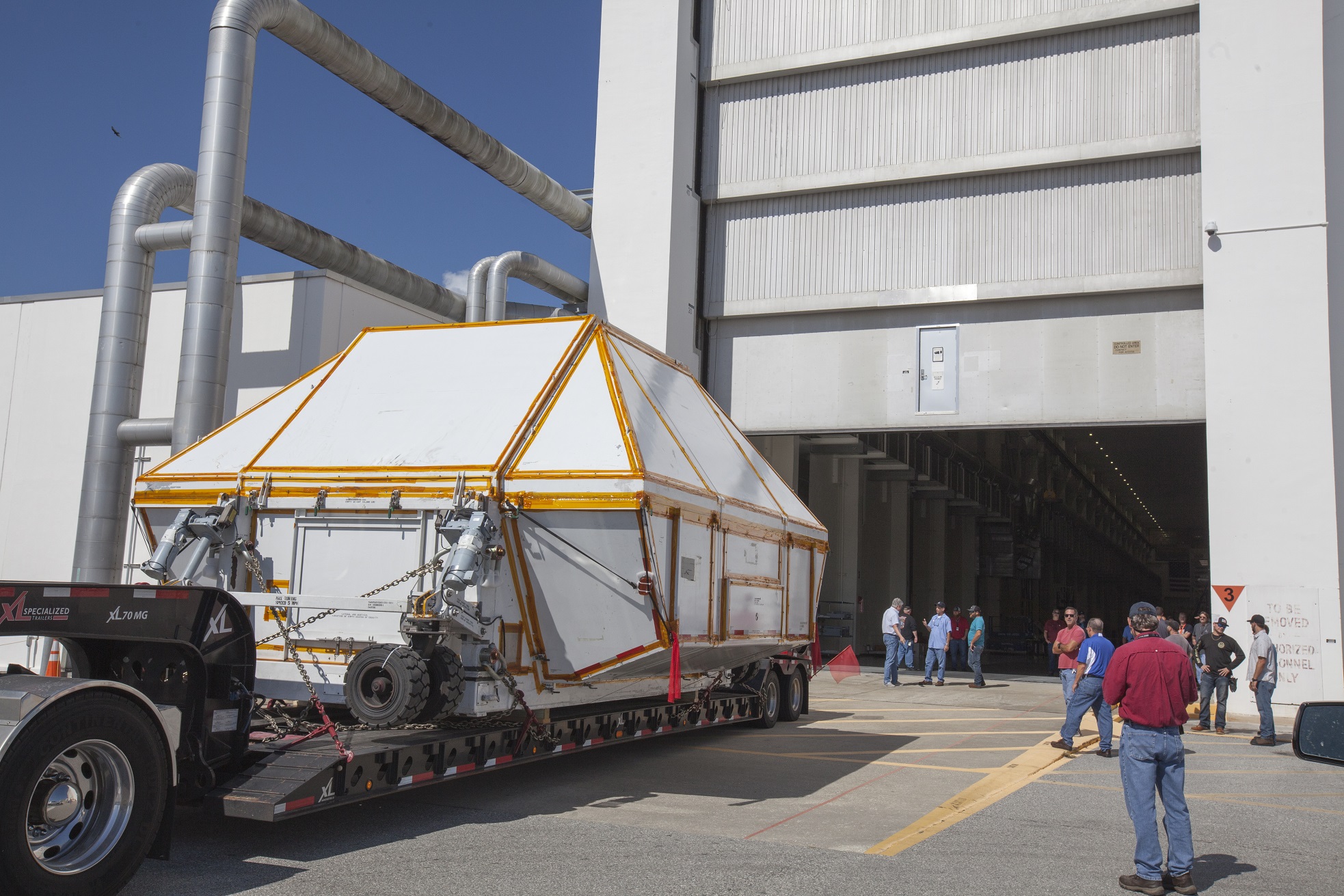 In the back of the area, the primary Launch Abort System (LAS) structure for the Ascent Abort-2 (AA-2) was also visible as it is being processed for the test schedule for next April.

Long term Orion program planning and production also continues, and Kirasich confirmed that long-lead orders for the EM-3 vehicle were made earlier this year. “Over the last four to five months we’ve started ordering EM-3 raw materials, the aluminum plates that will become the crew module,” he said. “Those will get delivered over the ensuing months and the process starts again. So we are into EM-3.”

ICON resets for October launch from the East Coast