Arianespace conducts its 300th mission with the 100th Ariane 5 launch 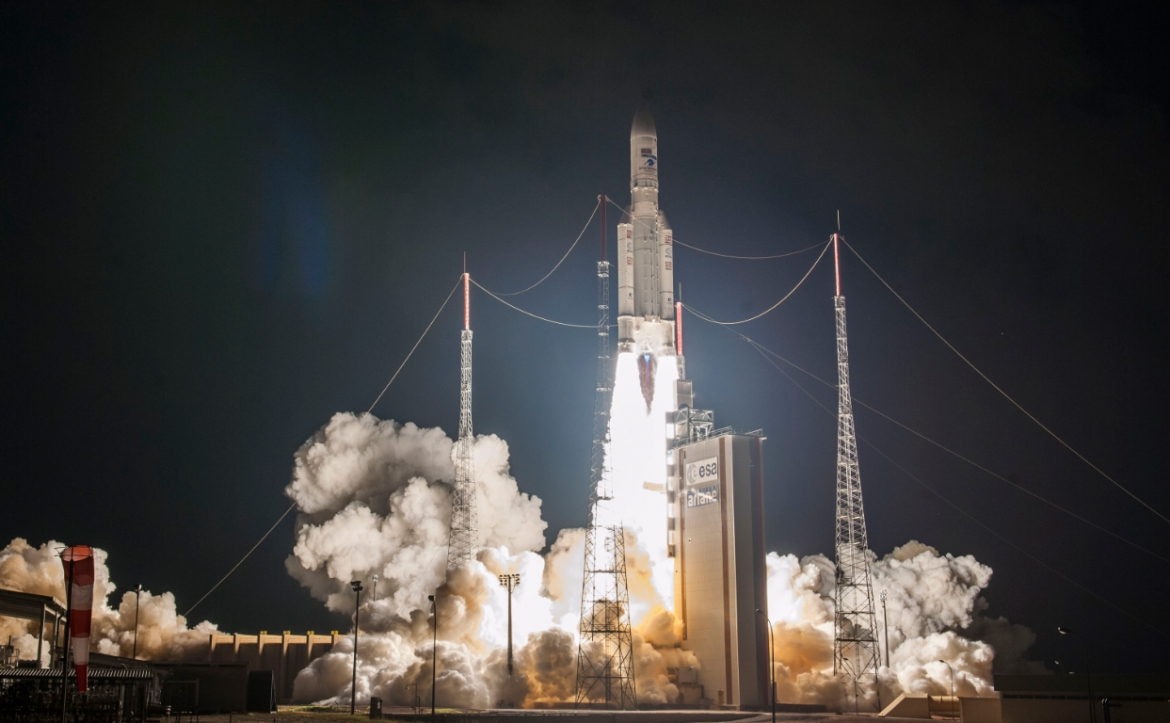 A milestone over 22 years in the making.  Tuesday saw the Ariane 5 rocket conduct its 100th flight, placing two telecommunications satellites into orbit in the process.  The Ariane 5, managed and operated by Arianespace, lifted off from Kourou, French Guiana in South America at the end of a 45-minute launch window at 22:38 UTC (18:38 EDT) following a hold during the countdown.

The 100th flight of Ariane 5 also marked the 300th mission of Arianespace’s three-member rocket family.  Arianespace, founded in 1980, is a multinational company responsible for the operation and commercial marketing of the Ariane launch program.

The Ariane 5 rocket was developed by the European Space Agency (ESA) to be a heavy-lift launcher used to deliver payloads to Geostationary Transfer Orbit (GTO) and Low Earth Orbit.

Manufactured under the direction of ESA and the Centre National d’Etudes Spatiales (CNES) of France, Ariane 5 succeeded its predecessor, Ariane 4, but was not derived from it – instead being developed from a completely new slate. 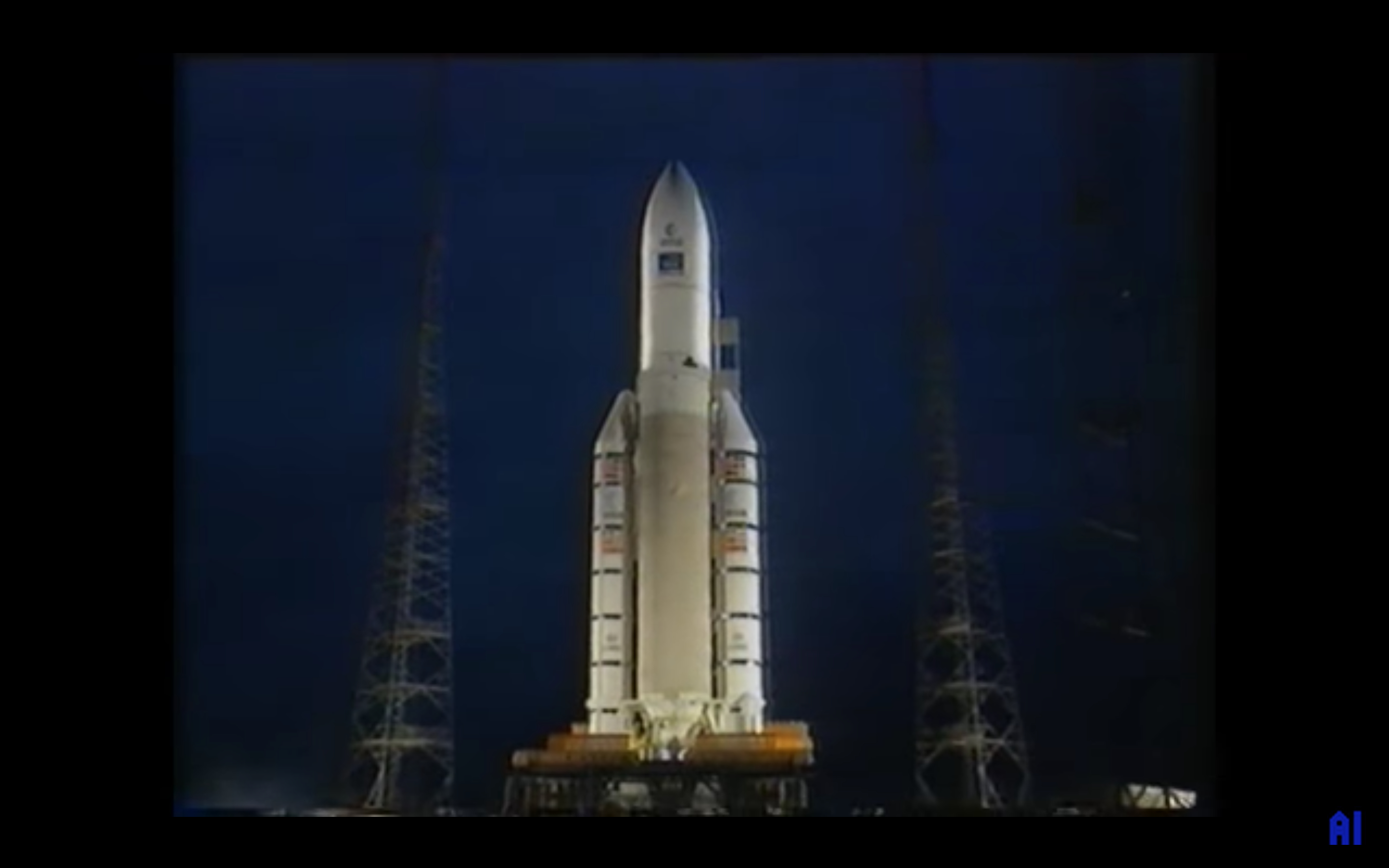 The very first Ariane 5 on its launch pad in South America before its maiden voyage in June 1996. (Credit: ESA/Arianespace)

The Ariane 5 G flew 16 times from June 1996 to 27 September 2003.  Of those 16 flights, 13 were complete successes, two were partial failures (first stage and upper stage performance issues, respectively), and one (its maiden voyage) was a mission-loss failure when the rocket exploded 37 seconds after T0 due to multiple software design failures.

Just over six years after its introduction, the first major upgrade to Ariane 5 was brought online – the Ariane 5 ECA.

The ECA (Evolution Cryotechnique type A) variant entered service on 11 December 2002, flying with an improved Vulcain 2 engine for first stage propulsion – which required elongation of the first stage propellant tanks.

Moreover, the ECA variant’s second stage was changed to the more efficient ESC-A (Etage Supérieur Cryogénique-A) – derived in part from Ariane 4’s third stage – while the twin solid rocket boosters were cast with more propellant and their casings lightened.

Since its introduction, the ECA variant has flown 66 times (the launch was its 67th flight) with 64 or 65 (depending on who you ask) total successes, 1 launch failure (its maiden flight), and 1 partial failure/1 mission success (again, depending on who you ask) flight where the two satellites were deployed into the wrong orbit but were able to reach their planned orbits within a few months. 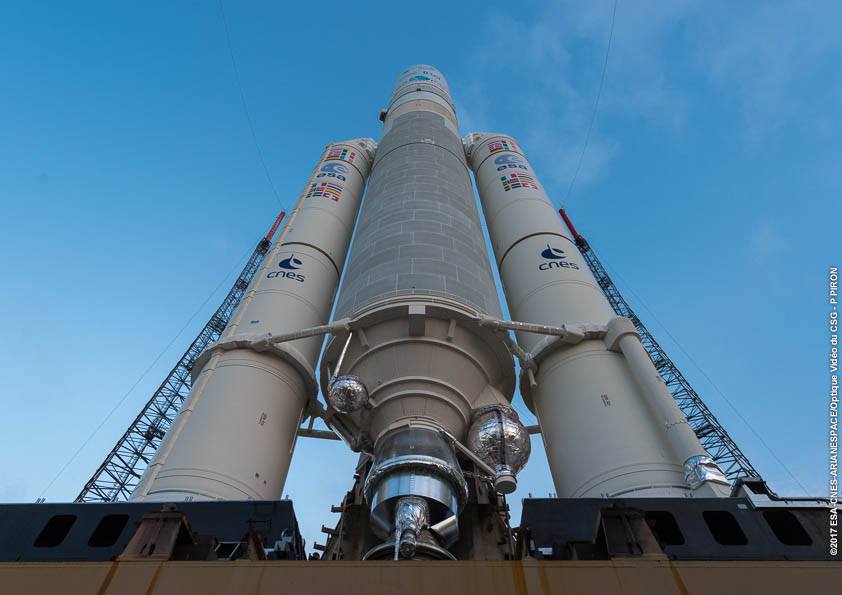 After the first-flight of the ECA variant and the final flight of the G variant, ESA, CNES, and Arianespace introduced the Ariane 5 G+ in 2004, which increased the total GTO payload capacity from the G variant for single payload launches to 7,100 kg (15,200 lb) and 6,300 kg (13,900 lb) for dual satellite missions.

After the G+ variant’s final flight, an unanticipated variant entered service – the GS.

The Ariane 5 GS was a short-term solution and gap-filler following the maiden launch failure of the Ariane 5 ECA.

At the time of the December 2002 first-flight ECA launch failure, all Ariane 5 launchers in production were ECA variants.  To ensure continuation of launch operations during the ECA failure investigation, redesign, and recovery, some of the ECA cores were modified to use the original Vulcain engine.

These vehicles were designated Ariane 5 GS.

The GS variant used the improved ECA-style solid rocket boosters and upgraded second stage of the G+ variant, but use of the original Vulcain engine on the higher mass and longer propellant tanked ECA core resulted in reduced payload capacity for the GS variant over the G+.

The Ariane 5 GS flew for the first time on 11 August 2005 and conducted six missions through 18 December 2009.  All of the GS variant flights were successful.

The ES variant was used to launch all five of ESA’s Automated Transfer Vehicles (ATVs) on resupply missions to the International Space Station from 2009 to 2014 and afterward to launch twelve Galileo global navigation satellites (four at a time) in 2016, 2017, and 2018. 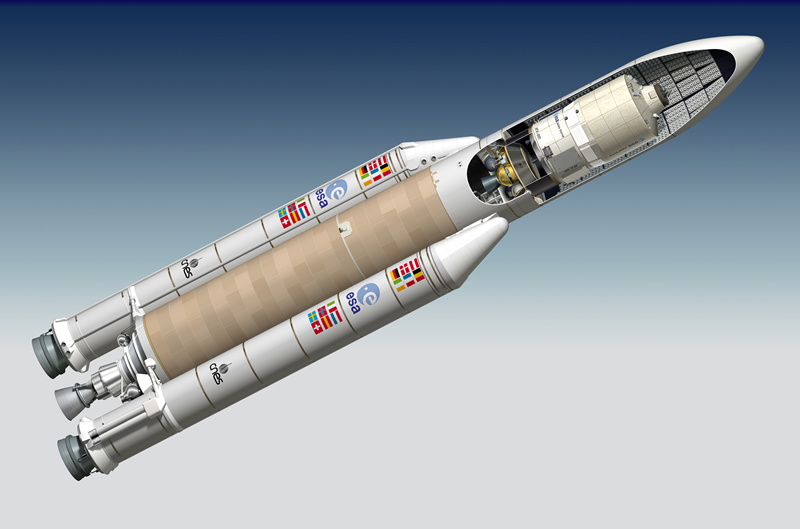 With the retirement of the ES variant, the Ariane 5 ECA is the only operational version of the rocket now in service.

Presently, Ariane 5 ECA has 23 booked flights remaining in its operational calendar (though more are possible).

Of those 23 scheduled flights (including today’s launch), notable upcoming missions for the launcher include October 2018’s launch of the ESA/JAXA BepiColombo mission to Mercury, the NET March 2021 launch of the NASA/ESA/CNES flagship James Webb Space Telescope, and the targeted June 2022 launch of ESA’s Jupiter Icy Moons Explorer (JUICE) mission – which is currently scheduled to be Ariane 5’s 122nd and final flight.

Ariane 5 will be succeeded by the under-development Ariane 6 rocket in the early 2020s.

Flying Ariane 5’s 100th launch was vehicle VA243, which launched the Horizons 3e and Azerspace-2/Intelsat 38 payloads – the 206th and 207th satellites to be launched by Ariane 5.

The “upper passenger” – the satellite riding in the top location when viewed from the side of the rocket – was the Horizons 3e telecommunications satellite. 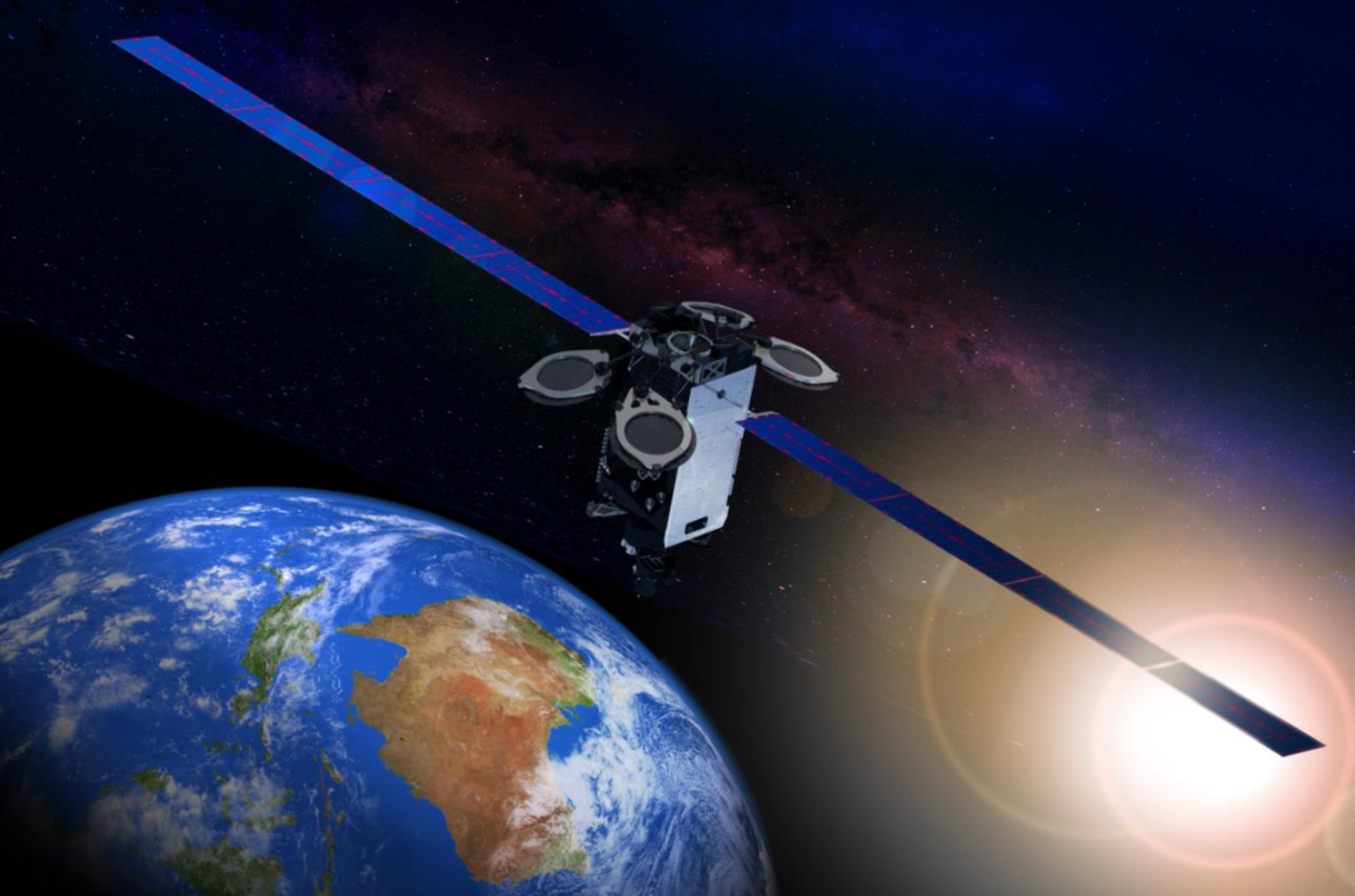 Horizons 3e, weighing in at 6,411 kg, is a joint venture between Intelsat and Sky Perfect JSAT and is designed to complete the Intelsat EpicNG network’s global coverage and bring the next level of high-throughput services to the Asia-Pacific region while expanding coverage in the Pacific Ocean.

The satellite all-digital satellite featuring full beam interconnectivity in C- and Ku- bands to provide 30 GB per second of bandwidth for fixed and mobile customers from its geostationary location in the 169° East orbital location.

Of note, Horizons 3e was not originally manifested for this mission and was a last-minute replacement for the GSAT 11 spacecraft which was removed from the mission earlier this year when more pre-launch checkouts were deemed necessary.

Riding in the “lower passenger” position was the Azerspace-2/Intelsat 38 multi-mission satellite.

Heading for a geostationary orbit in the 45° East orbital slot, Azerspace-2 will expand on the current capacity of the Azerspace-1 satellite and increase the total coverage area and spectrum of services provided by Azercosmos.

This expansion of current capabilities will be accomplished by placing Azerspace-2 just one orbital degree away from Azerspace-1, which is currently located in geostationary orbit at the 45° East location. 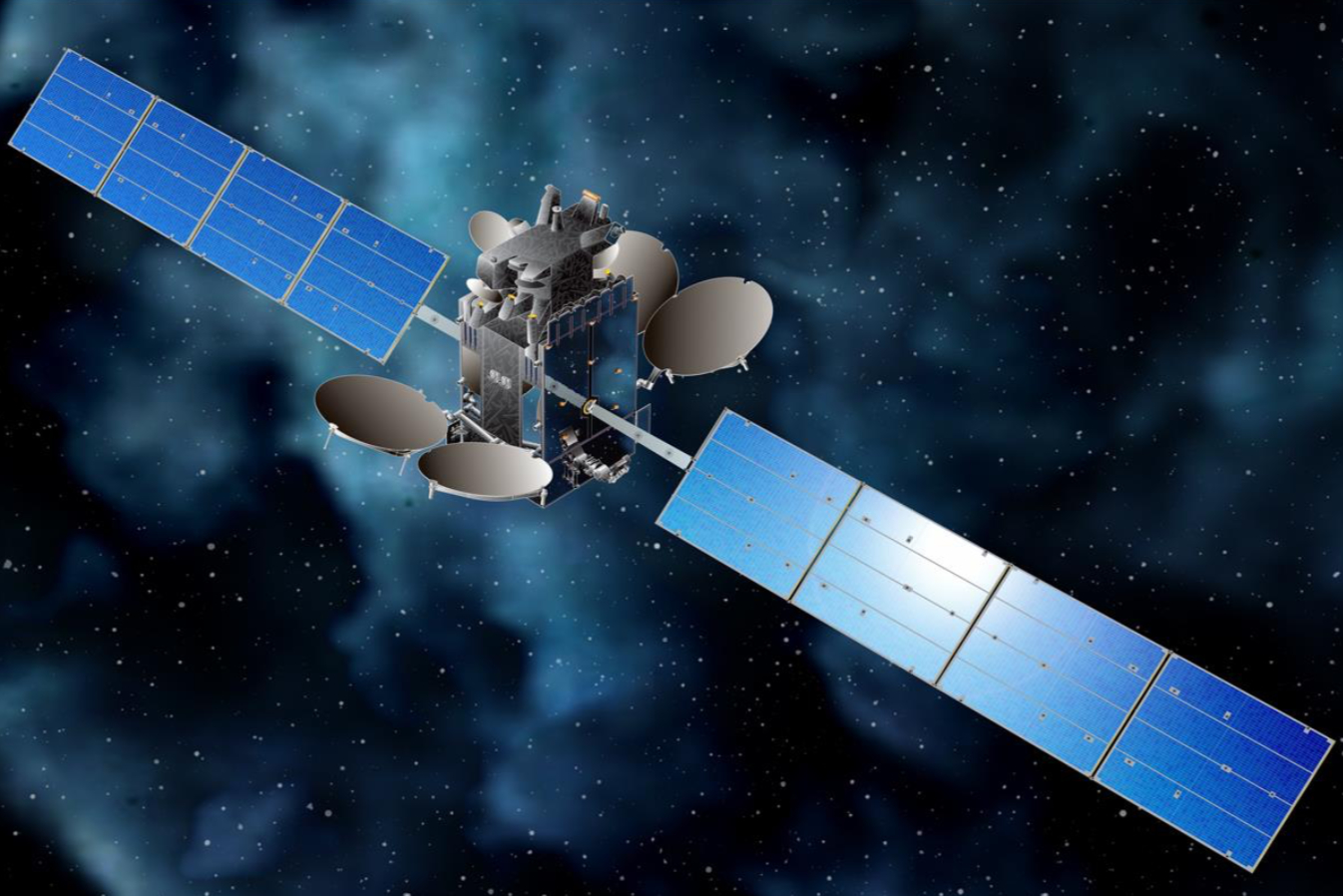 Azerspace-2 is the second geostationary satellite for Azerbaijan and will offer enhanced capacity, coverage, and services to support growing demand in the region for direct-to-home, government, and network services in Europe, Central and South Asia, the Middle East, and sub-Saharan Africa.

As part of the multi-mission element of the satellite, the Intelsat 38 portion of the comm sat will provide Ku band capabilities and continuity of service for the Intelsat 12 satellite located in the 45° East location and will provide critical broadband connectivity for corporate network and government services in Africa.

Azerspace-2/Intelsat 38 was built by Space Systems/Loral (SSL), a California-based company, and carries a designed lifetime of 15 years.

For its 100th mission, Ariane 5’s countdown began 11 hours 23 minutes before the opening of its 45-minute launch window.

Final electrical system checkouts followed 10 hours 33 minutes prior to launch leading to the start of fueling operations at the T-minus 4 hour 38 minute mark. 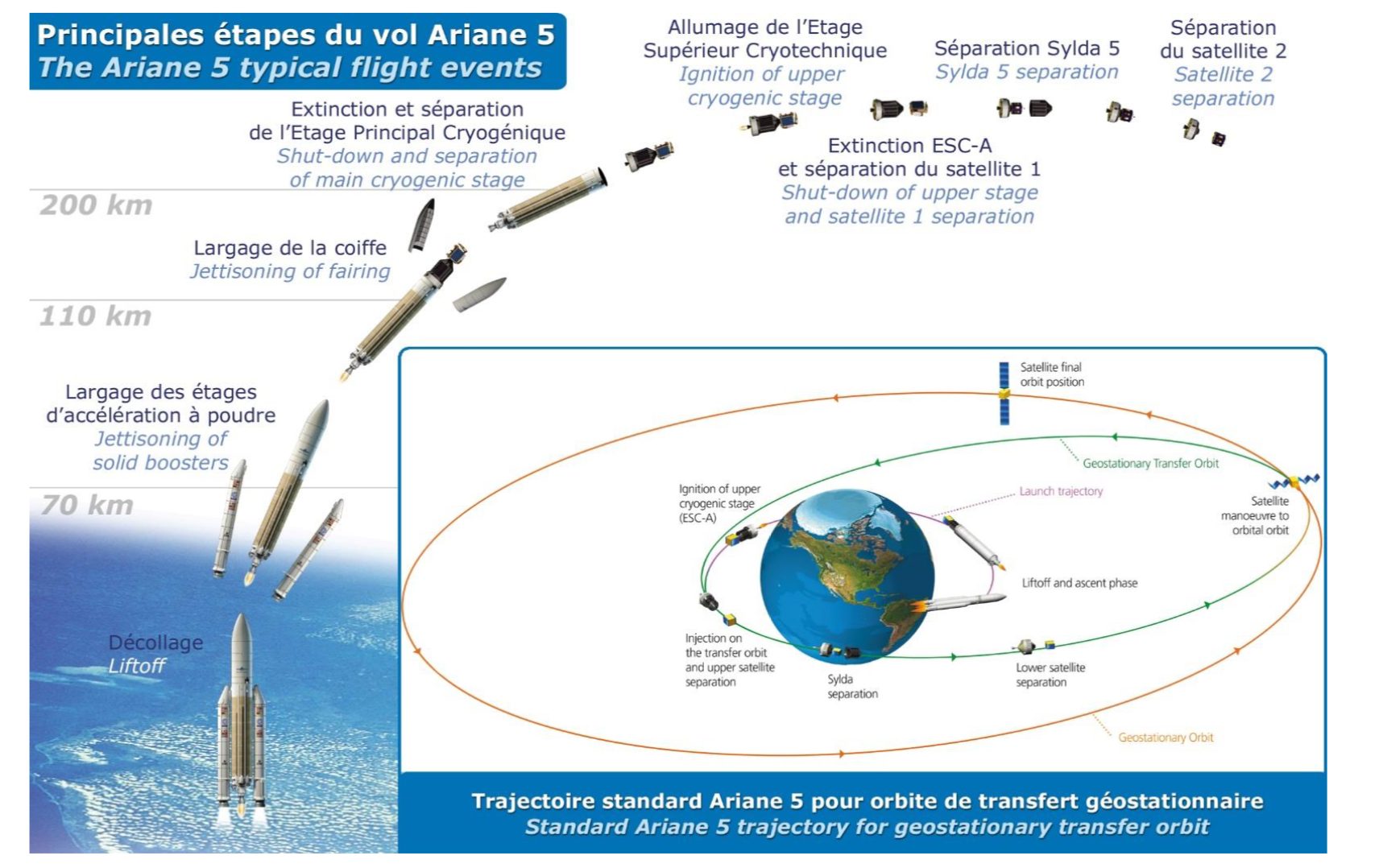 Prior to the T-7 minute mark, the launch director received a status check and readiness report of Ariane 5’s main systems.  With all systems reporting ready, the final synchronized sequence – handled automatically by both Ariane 5’s computers and two redundant computers at the launch complex – of the count began at T-7 minutes.

If weather conditions are not favorable or a system reports an off nominal condition, controllers could hold the countdown at the T-7 minute mark until the weather clears, the issue is resolved, or the launch window for the day expires.

Once the final synchronized sequence begins, any issue that result in an initial hold and safing of the vehicle are followed by a recycle of the count and all of Ariane 5’s systems to the T-7 minute and holding mark. This was the case on Tuesday, with a ground station issue causing a recycle to T-7 minutes.

Following teh recycle, Ariane 5’s onboard computers took control of all countdown and launch operations at T-4 seconds.

After health checkouts of the Vulcain 2 and confirmation of a good first-stage engine, the twin solid rocket boosters ignited at T+7.05 seconds leading to first motion – liftoff – from the launch pad at T+7.3 seconds.

Fine day for a launch! Flight #VA243, which lifts off later today, is the 100th launch of a heavy-lift #Ariane5. Grateful for the trust of our customers on this mission @INTELSAT #SKYPerfectJSAT and @AzercosmosOJSCo. pic.twitter.com/vOVdg7mxfS

The solid rocket boosters burnout and separated from the ECA first stage at T+2 minutes 19 seconds.

Orbital injection into Geostationary Transfer Orbit occurred at T+25 minutes 29 seconds, at which point the ESC-A stage engine shut down.