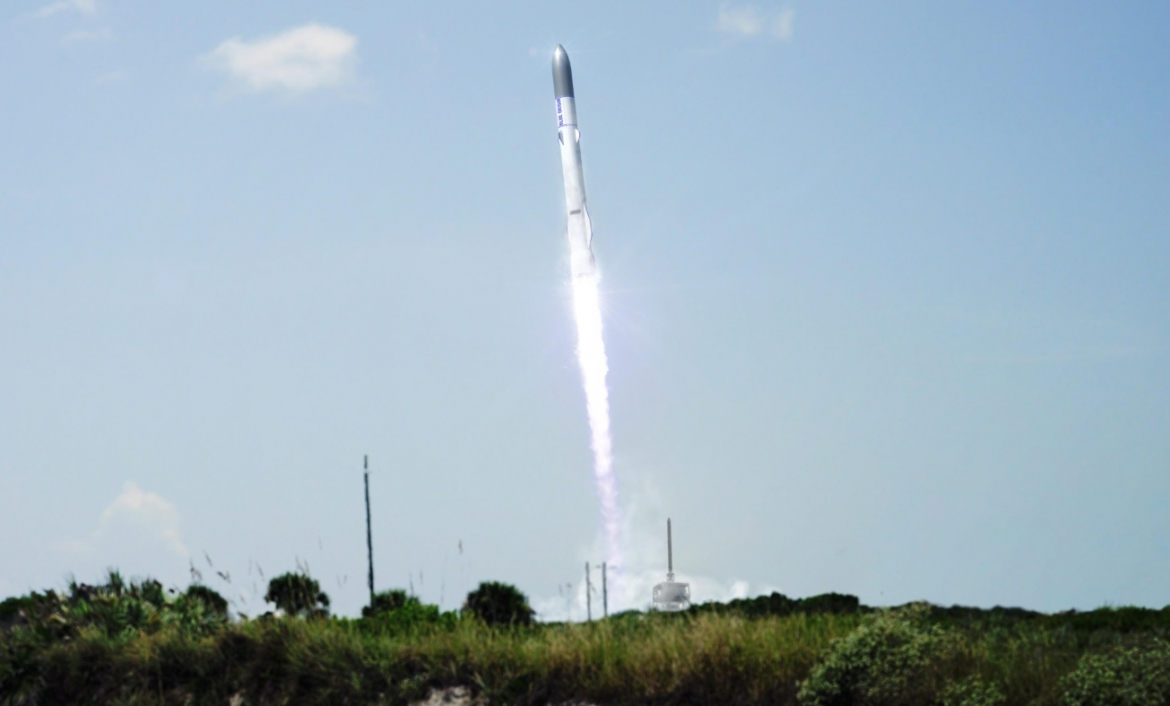 Blue Origin is making the final preparations for crewed spaceflight in West Texas. Meanwhile, at Cape Canaveral, Florida, the company is continuing to push towards achieving orbit and entering the commercial launch market. During a speech this week, Jeff Bezos confirmed the company has already invested $1 Billion in space coast facilities and another $1 billion will be fed into the New Glenn rocket next year.

The New Shepard rocket, named after the first American in space Alan Shepard, is designed for suborbital space tourism. Passengers can experience a few minutes of weightless as the spacecraft flies up to 107 km, 7 km above the officially recognized Karman Line between Earth’s atmosphere and space. New Shepard first reached this altitude on Flight 8 in April.

The New Shepard 3 vehicle completed the most recent test flight in July, demonstrating the crew capsule’s escape system at the edge of the flight envelope. Flight 9 was the latest in a line of flights designed to demonstrate the safety of the crew vehicle, including another in-flight abort test in 2016, a pad abort test back in 2012, and a parachute redundancy test in 2016 where the capsule descended under only 2 of the 3 parachutes.

Blue Origin’s New Shepard operations are based out of Corn Ranch in Van Horn, Texas, which is owned by Amazon CEO and Blue Origin founder Jeff Bezos. Blue Origin CEO Bob Smith noted that current plans are to fly passengers “early next year.” The first passengers are understood to be internal test pilots and will fly on New Shepard 4.

Meanwhile, on the east coast, Blue Origin is quietly preparing to go orbital with its New Glenn rocket, named after the first American to orbit the Earth, John Glenn. The factory at Exploration Park on Merritt Island is, according to Bezos, “up and operating.” New Glenn is tracking towards a debut flight in 2020.

The first stage, similar to the New Shepard booster, will land propulsively in order to be reused. Once recovery and reuse become routine, factory production will focus on upper stages, as Blue Origin only plans to build a small fleet of lower stages.

First stage recovery and reuse will be important in order for Blue Origin to compete with established launch providers SpaceX and United Launch Alliance (ULA).

SpaceX’s Falcon Heavy rocket, which made its maiden flight in February, offers 63 tons to low Earth orbit in expendable configuration. But New Glenn is planned to offer 45 tons to LEO while still enabling first stage recovery, performance that should be equal if not better than Falcon Heavy.

ULA’s Vulcan launcher, also slated for a 2020 debut, is planned to launch up to 35 tons to LEO. All three vehicles are partially reusable, with comparable launch costs.

Contrasting with New Shepard, the horizontal velocity needed to achieve orbit means New Glenn will have to land downrange from the launch pad. Blue Origin has bought a ship for the purpose, acting as a landing platform out in the Atlantic Ocean, comparable to SpaceX’s Autonomous Spaceport Drone Ships. One key difference, however, will be the hydrodynamic control surfaces on Blue Origin’s recovery ship. 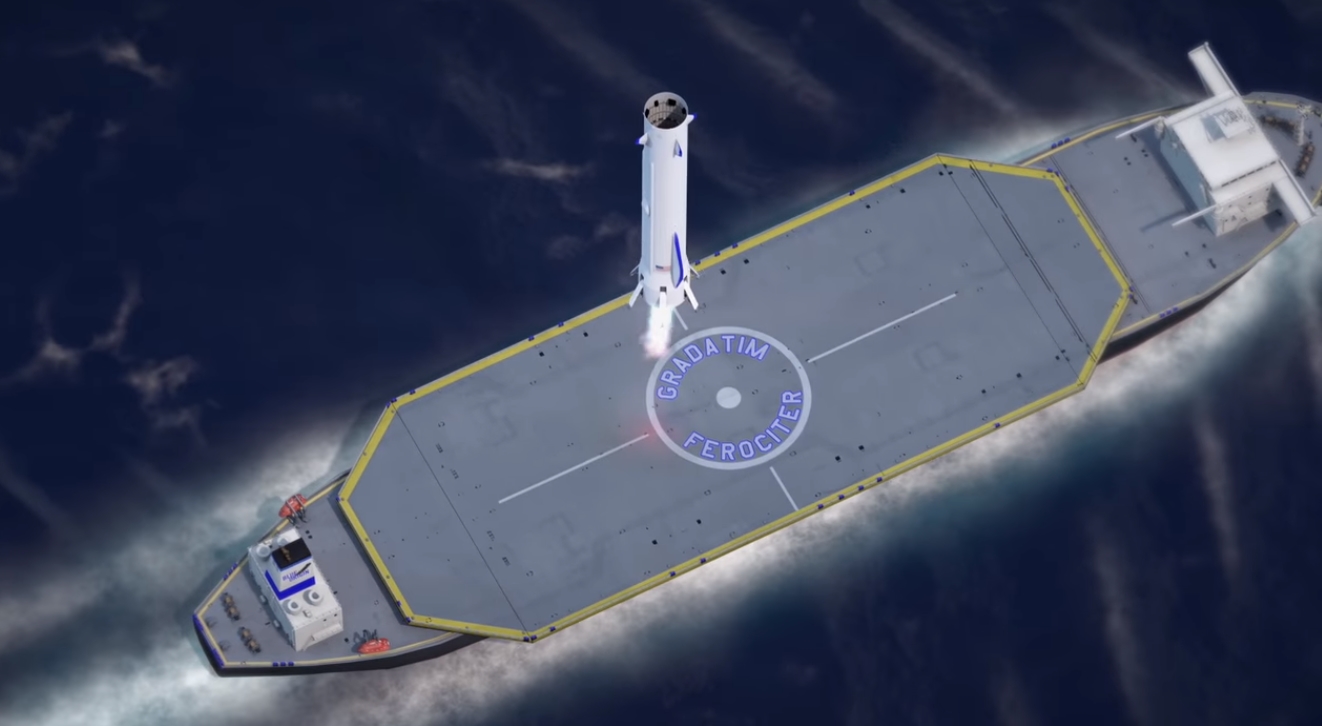 SpaceX’s drone ships use small station-keeping engines to remain stationary during landing. Blue Origin plans for their ship to be underway during landing, using the hydrodynamic surfaces to maintain stability. Bezos said this decision was made to enable recovery in rough seas.

LC-11 will be used to test the BE-4 engine, seven of which will power the first stage of New Glenn. Blue Origin has successfully reached 70% thrust and 114 second duration burns on their test stand in West Texas. 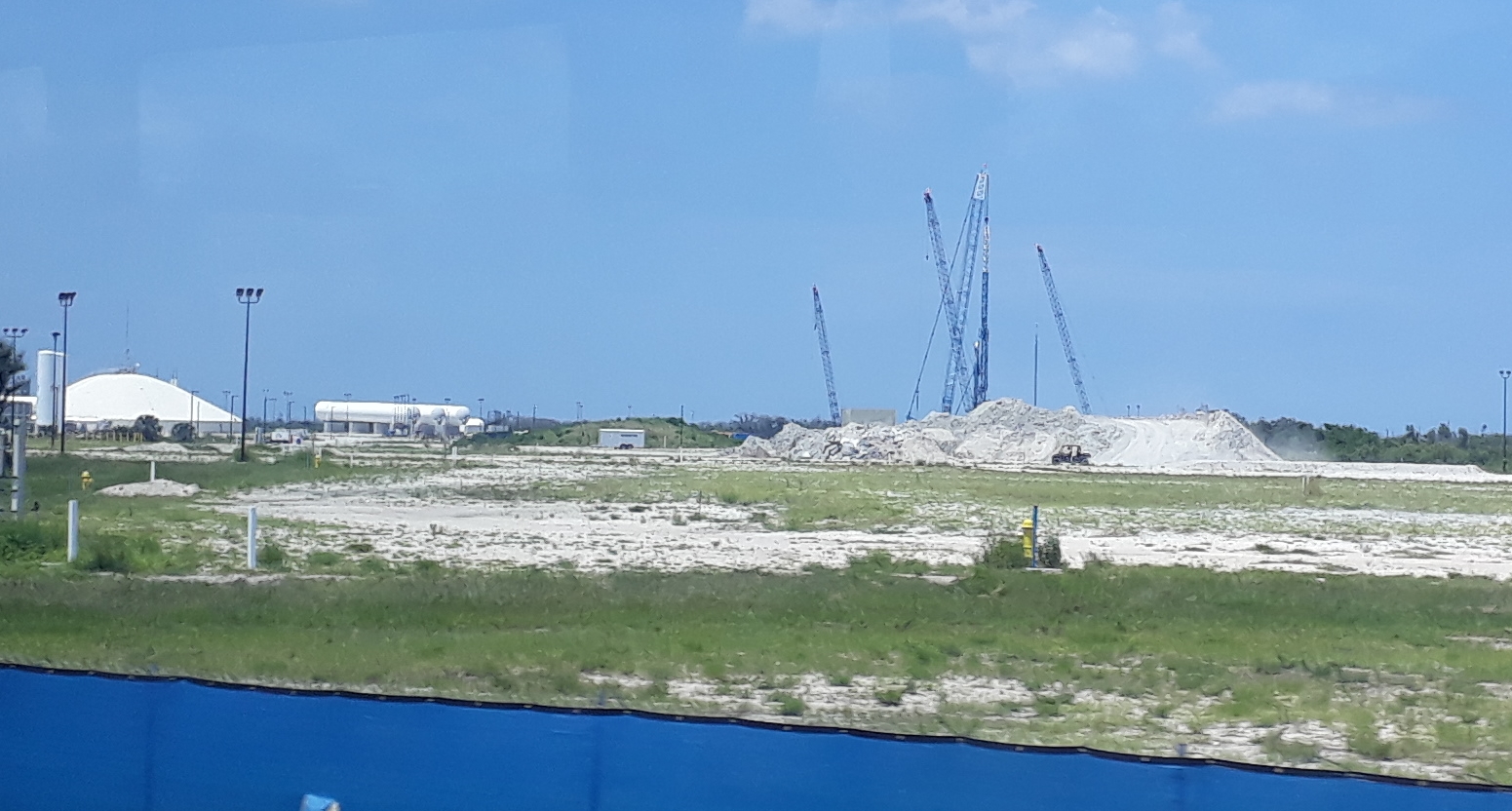 The progress of BE-4 is being closely watched by United Launch Alliance, who is considering the engine to power the first stage of their Vulcan rocket. The BE-4 is competing with Aerojet Rocketdyne’s AR-1, although a stop work order that was issued last August could suggest Blue Origin will be selected.

The design of New Glenn has had subtle changes as development continues. The upper stage will now be powered by a vacuum optimized BE-3 engine, designated BE-3U, based off of New Shepard’s engine, instead of a vacuum optimized BE-4. Blue Origin also announced last year that the payload fairing had been expanded to 7 meters in diameter from the original 5.4 meters, in order to launch more voluminous payloads.

The BE-3U engine is also being considered for the Space Launch System’s Exploration Upper Stage (EUS), along with Aerojet Rocketdyne’s RL-10 and Japan’s MB-60. 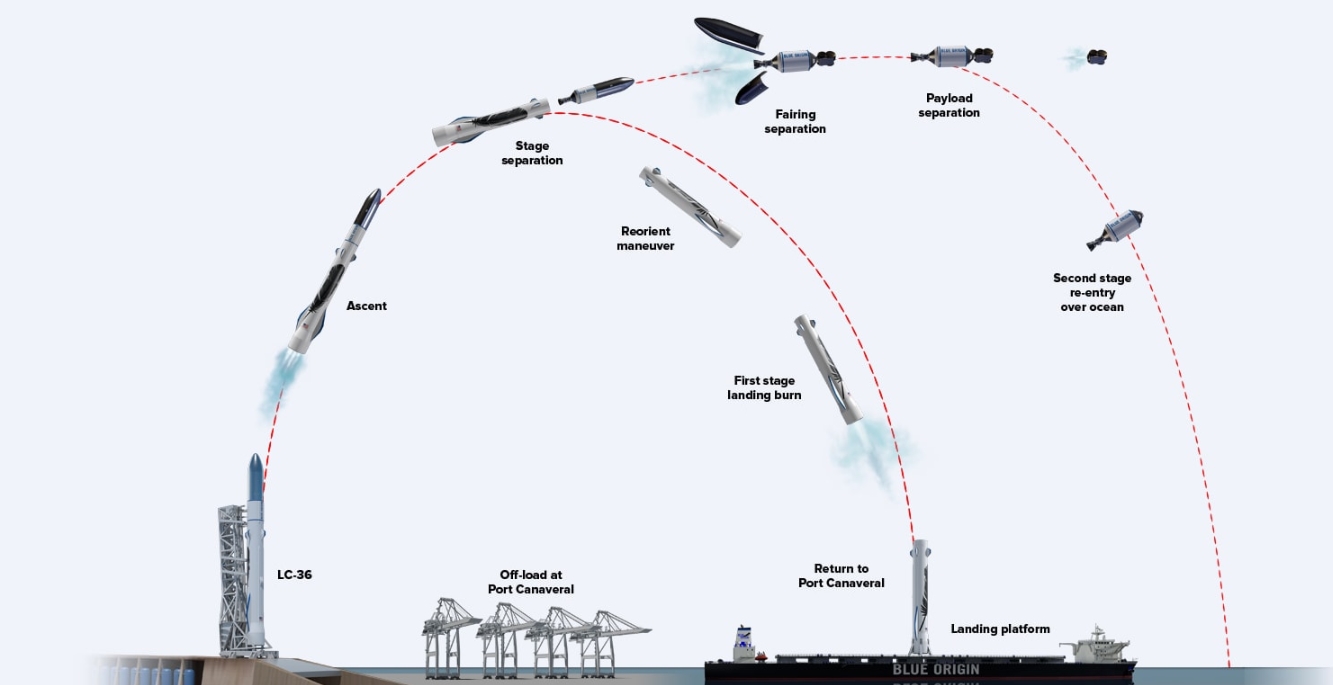 Crewed flights launched aboard New Glenn are also under development.

Beyond low Earth orbit, Blue Origin also has the Blue Moon program aiming to land uncrewed payloads on the surface of the moon. These missions could launch on a variety of vehicles including New Glenn.

This week, Jeff Bezos spoke at the Air Force Association conference about innovation and Blue Origin. He maintained that the United States must maintain dominance in space, and to do so, must have the capability to go to space more frequently and with less lead time.

Blue Origin aims to offer these capabilities, with a frequent launch cadence, on-demand availability, and lower cost. For example, Bezos said that a New Glenn launch will not be delayed by a single sensor reading, a sort of “sensor out” capability. He also said New Glenn’s six landing gear enable the stage to land with a failed landing leg.

Bezos also stressed that taking apart and refurbishing a vehicle will be more expensive than an expendable vehicle and that Blue Origin designed New Shepard and New Glenn for operational reusability.

There is also the New Armstrong launch vehicle, of which little is known. Keeping with the pattern of Blue Origin’s smaller launchers, the name suggests New Armstrong would enable crewed lunar missions, named after the first human to walk on the moon Neil Armstrong.

Such a vehicle would have to compete with SpaceX’s BFR, on both performance and reusability. Those plans stretch deep into the 2020s.