SLS ML completes 39B testing rolls back to the VAB 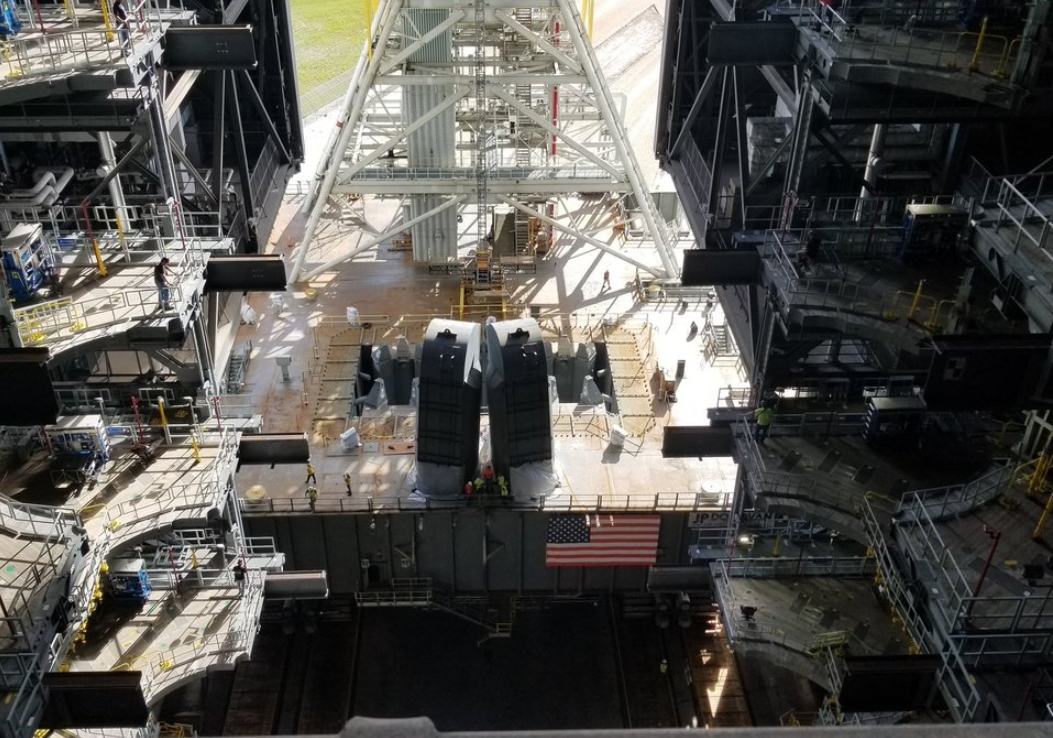 The Space Launch System (SLS) Mobile Launcher (ML) has conducted a major milestone, as it rolled to Pad 39B atop Crawler Transporter -2 (CT-2). Engineers are now testing the huge structure at the “clean pad” before rolling back – now set for this coming weekend – to the Vehicle Assembly Building (VAB) for one year’s worth of multi-element verification and validation testing – which is now understood to include four months of testing back at 39B – prior to being ready to accept the first SLS rocket ahead of Exploration Mission -1 (EM-1).

The CT and ML have rolled out together before back in 2011. However, this was in their Constellation Program (CxP) configuration, before the ML was heavily modified from hosting Ares I rockets to SLS.

With new umbilicals and a completely rebuilt launch mount, the SLS ML now sports an array of new arms that will link the huge structure to the rocket.

This conversion was a large, multi-year, undertaking as the new launch mount has to cater for four RS-25 engines and two Solid Rocket Boosters. It would also require numerous changes and additions to the array of umbilical connections on the tower. 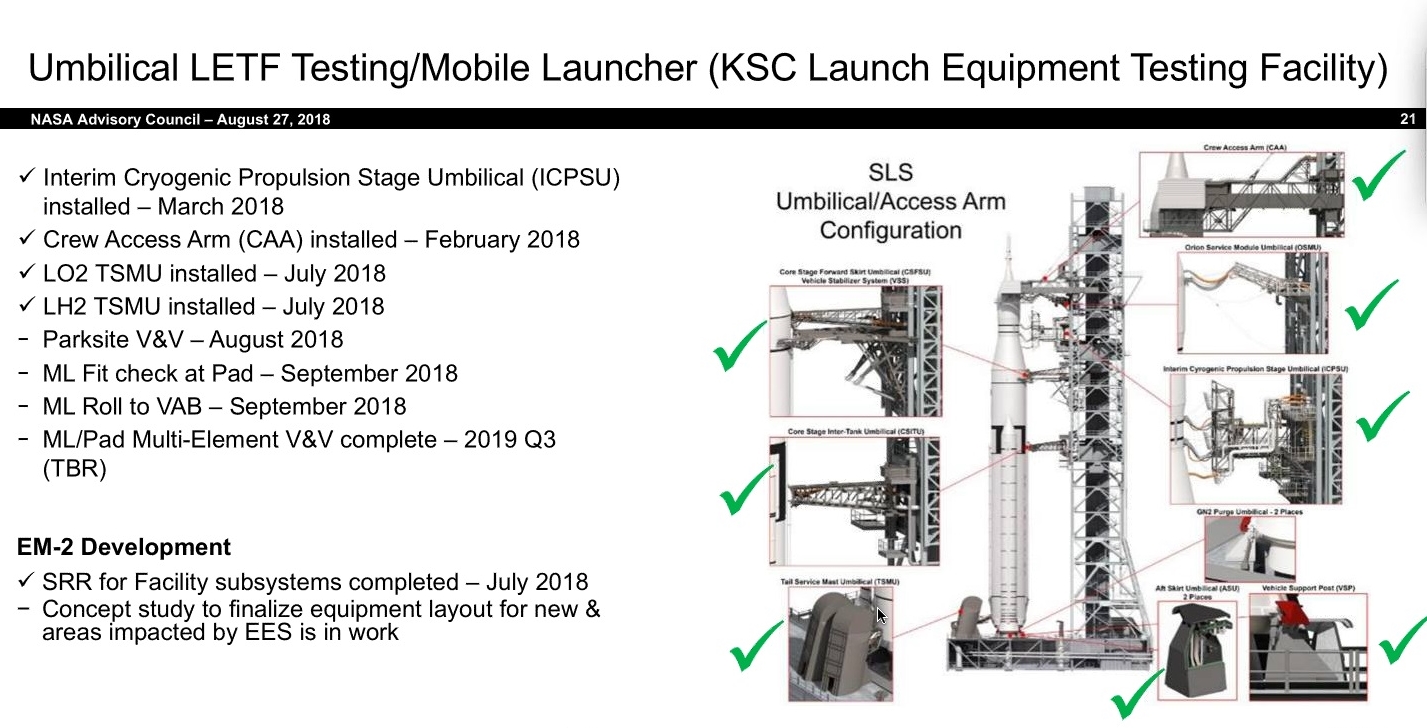 ML Umbilicals overview at the NAC – via NASA.

Challenges relating to the total mass of the structure and a small lean – cited as “some deflection” by NASA – have been mitigated enough to complete the umbilical installation and provide the green light to take the ML on a road trip up the Crawlerway.

“We’ve got all the umbilicals installed from top to bottom. The contractors final day at the Park Site was on Wednesday, as the ML rolls on Thursday for a fit check at the pad,” noted Bill Hill of NASA’s Exploration Systems Division at this week’s NASA Advisory Council (NAC) meeting.

The ML was carried by Crawler Transport -2 (CT-2) which has itself undergone a large number of modifications to allow it to live on deep into the 2020s and possibly beyond.

CT-1 is also following the same modification path, although it’s CT-2 that is currently the prime Crawler and set to take the EM-1 SLS stack to the pad in 2020.

For this rollout with the ML, the trip headed to Pad 39B, which also has undergone a large-scale modification over recent years.

Following demolition work removing its Shuttle era structures, the pad is now deemed a “clean pad”, although it has an array of structures catered to hook up the pad’s utilities to that on the ML.

It’s possible that engineers will once again test the Sound Suppression System, a water deluge system, when at 39B.

“We’ll test it again when we get the Mobile Launcher ‘piped in’ and ready to go,” Mr. Hill hinted.

The most recent addition has been the flame defector that has been built and installed inside 39B’s Flame Trench. 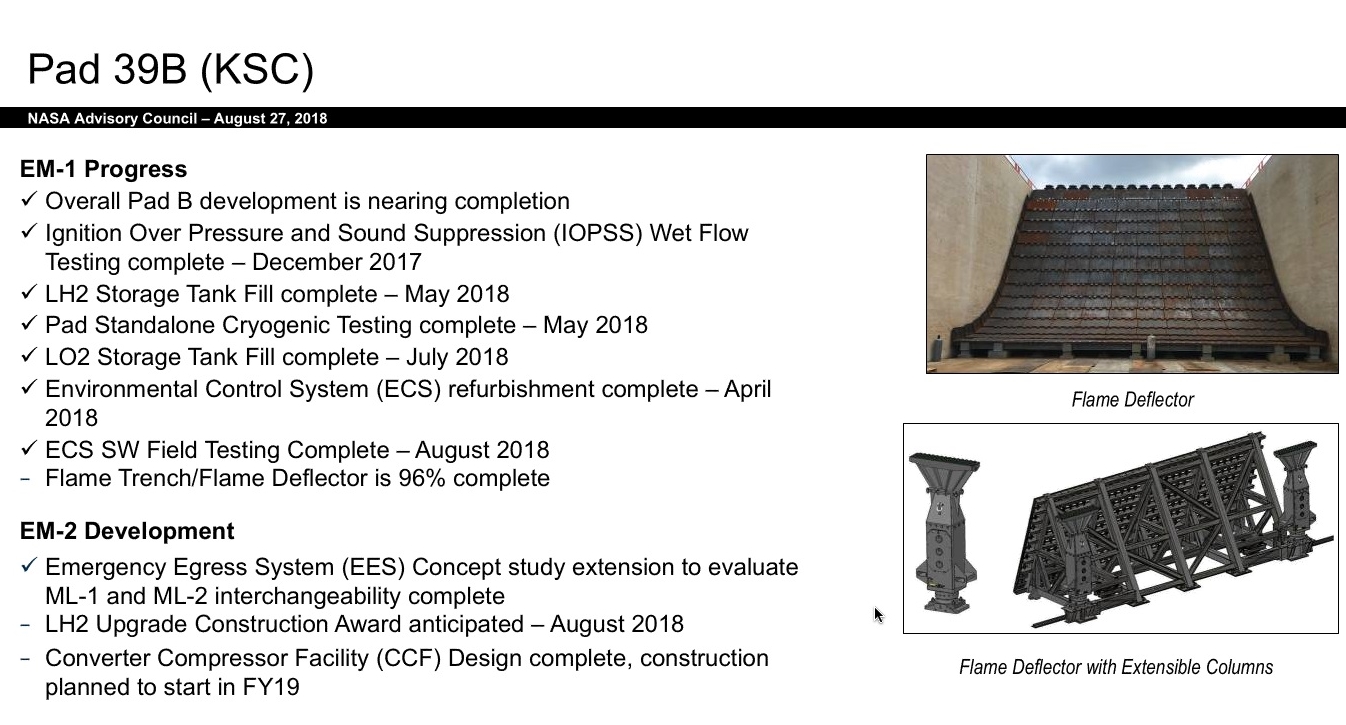 “Overall deployment is nearing completion. (We didn’t think we had to do it ahead of SLS Block 2, but) we’re adding some additional columns on the SRB side deflectors to provide some additional stiffness to the actual platform once we get to the pad. That design effort is currently in work,” added Mr. Hill.

The pad’s capacity to hold the LOX and LH2 for SLS launches is also going to be upgraded over the coming years, mainly to cater for the more-thirsty SLS Block 1B and Block 2 rockets.

While there’s enough capacity at the pad to fill a SLS rocket, the extra capacity allows for more on-site propellant to refill the rocket in the event of a scrub turnaround. Large quantities of propellant are lost during such a recycle due to boil off and evaporation. 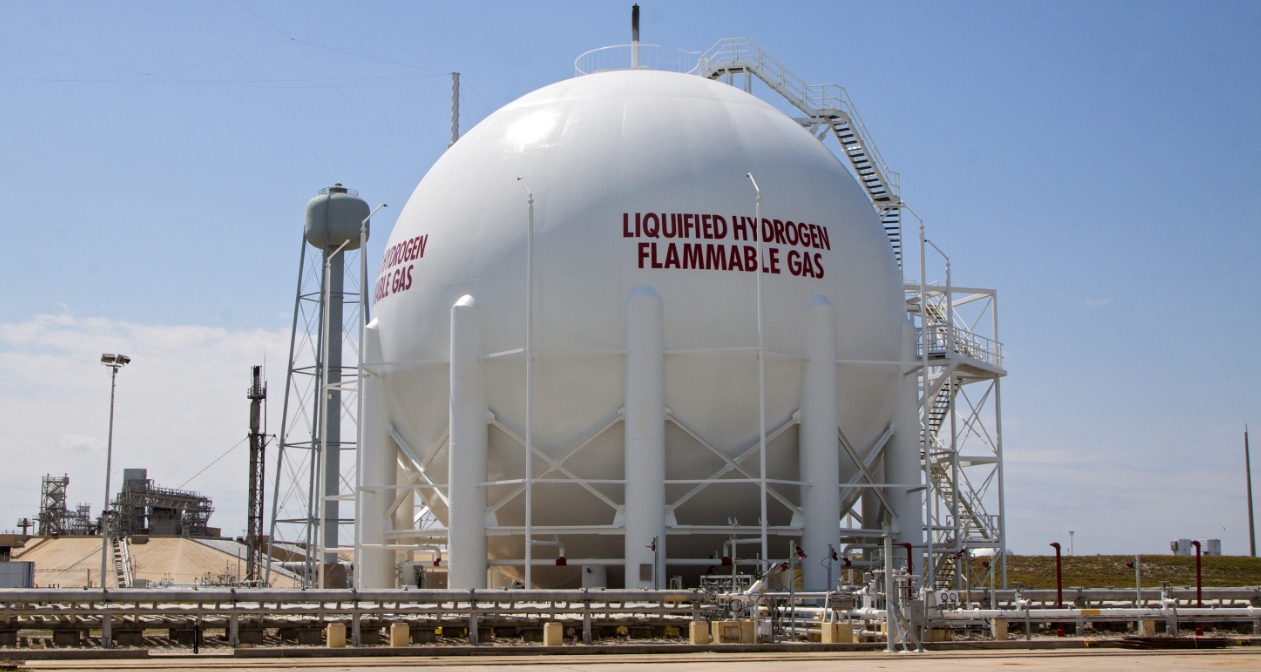 “We’re also doing an upgrade of the LH2 tank area where we’re adding a 1.4 million gallon sphere and plumb that in next to the 960,000 gallon sphere that we have in place today – as we weren’t going to have sufficient storage capability for a quick (scrub) turnaround (for Block 1B),” Mr. Hill noted.

“Even for EM-1 (Block 1) we’re going to store LH2 at ULA’s Complex 37 and if we have to do a 48 hour turnaround we’ll just go truck it over as we couldn’t figure out the logistics – or the sufficient amount of trucks – over from the vendor in Louisiana to the launch site in the event of a 48 hour turnaround. So this (using ULA’s pad) was a fairly elegant way around it.

“We’re also working on some compressor facilities which we use for high-pressure nitrogen on the pad and that work will start in the next year.”

Once the testing has been completed on 39B, the stack will begin the slow rollback. However, it will not return to the Park Site that has been its home for the past few years. This time it will roll into the Vehicle Assembly Building (VAB) – technically a major milestone as this will be its home until it rolls out again, this time with the complete SLS stack for EM-1. 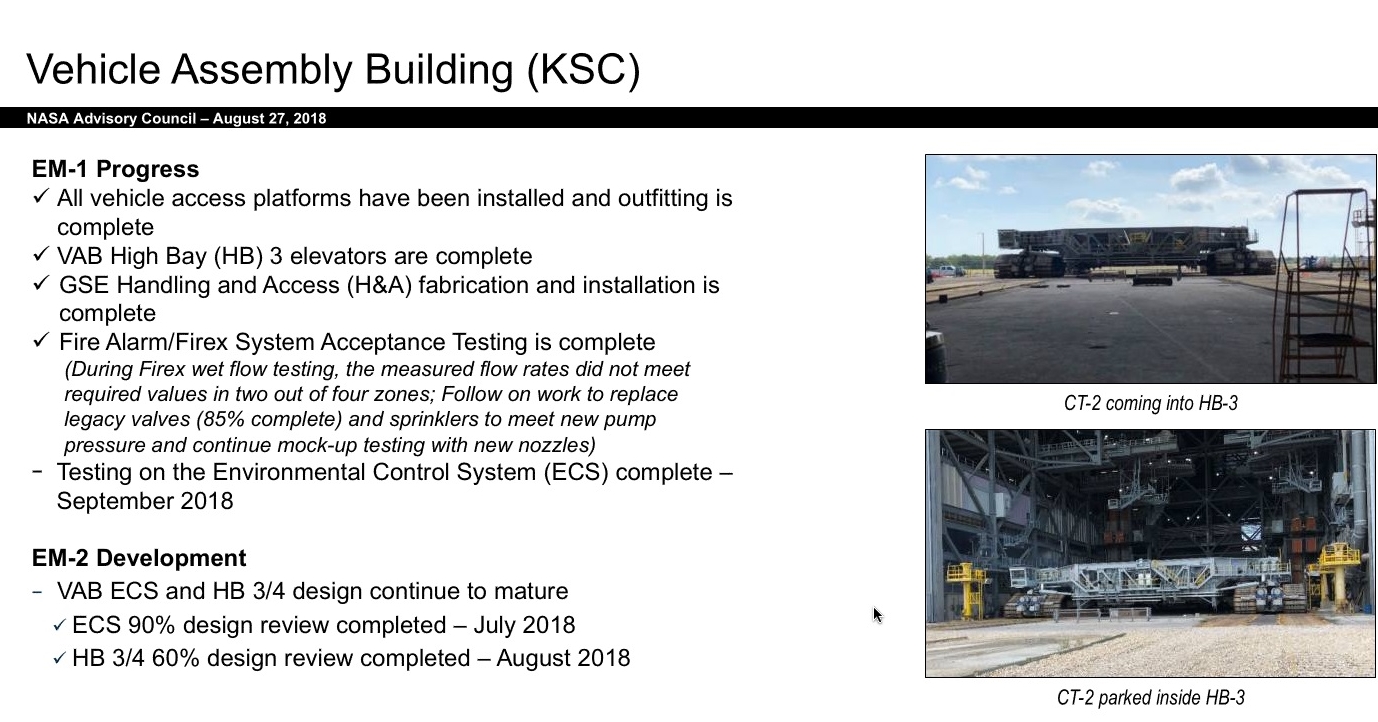 VAB status at the NAC – via NASA

“We’ll roll back to the VAB around the 7th or 8th (of September). Then we’ll conduct the multi-element verification and validation campaign that should be complete by the third quarter of next year.”

That effort is believed to include the removal of a large number of umbilicals to allow for the installation of shims, which will help counter the deflection and mitigate additional stress when large arms – such as the Crew Access Arm (CAA) are swung out into position away from the Fixed Service Structure (FSS) tower.

It also appears the ML will be rolled back and forth a few times, on a timeline that was noted to be different to what Mr. Hill said just days previous.

Access to the ML from inside the High Bay in the VAB is available now the multitude of platforms have been installed.

“We got everything complete, all the platforms are in, we’ve done all the fire alarms (FIREX system, insulation testing) and we’re ready to go there – although we need to do some environmental control system testing once we get the Mobile Launcher integrated,” added Mr. Hill.

Rollout began last Thursday, with the process to lift the ML off its mounts at the Park Site taking around 30 minutes, prior to first motion being recorded at 12:38 PM Eastern. 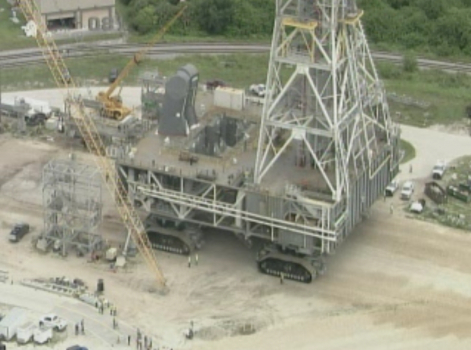 Led by water trucks, the ML is making steady progress around the VAB before heading down the long Crawlerway towards SpaceX’s Pad 39A. The duo then took a left turn and headed towards 39B.

They reached the half way point by the evening before calling it a night. While the Crawlers can operate through the night – and often did so during the Shuttle era – the plan is to complete the journey to 39B on Friday.

That second part of the rollout began just after dawn break, with the duo continuing down the Crawlerway to the fork in the road where one path leads to SpaceX’s 39A and the other – a left turn – takes a path towards Pad 39B.

The ML is sitting at the gate to 39B! Really historic day as it’s moved into place for fit checks. #NASA @NASA_SLS @NASASpaceflight @ExploreSpaceKSC pic.twitter.com/dYclTjQdaS

They reached the ramp on 39B just after lunchtime and will now make the short trip up the ramp using the CT’s leveling system to keep the ML perfectly level during the roll up the incline.

It then arrived at the Mount Mechanisms where a planned stop was used to verify the alignment between the mounts and the crawler/ML using the Laser Docking System (LDS). It was then carefully lowered in place to mark the completion of the rollout.

It was later noted that the LDS wasn’t used due to time constraints at the end of the work day, but the accuracy of hard down was within an inch, which has been classed as an amazing achievement.

CT-2 was moved off the pad ramp and parked at the perimeter ready to pick up the ML for a Friday rollback.

Numerous testing was completed on 39B, including a water deluge test.

You know you’re in between rocket programs when you’re excited about water flow tests on a rocket tower. Last night’s excitement. pic.twitter.com/vZP0lHTZU9

The rollback began on Friday morning this time, the ML was heading to the VAB for its year long preparation ahead of the EM-1 stacking campaign.

The rollback went without issue, allowing the duo to complete the entire 4.4 mile trip to the VAB doors where they parked up for the night.

Catching a ride on the company vehicle back to the office today pic.twitter.com/Fxh5LCdB8G

Rolling into the VAB included a test of the LDS, to tick off the final outstanding test element of the move.
*Current lead image accreditation link*