SpaceX finalizing Pad 39A upgrades for return to crew operations 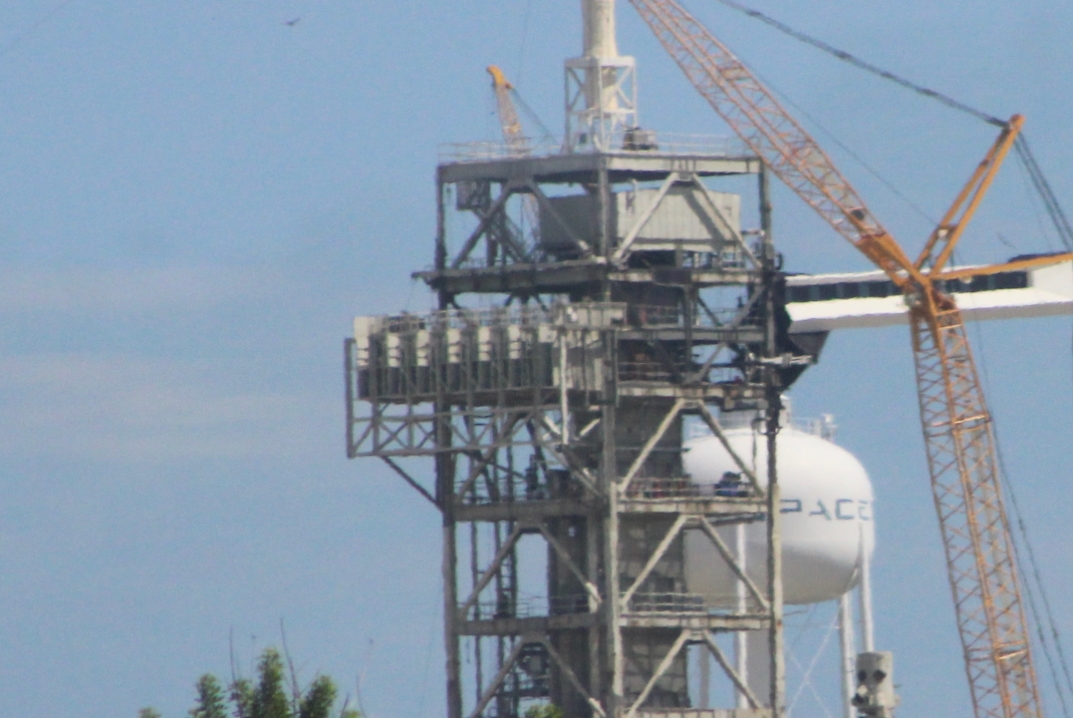 SpaceX is finishing its years-long campaign to return Launch Pad 39A to crew operations. Following the installation of the Crew Access Arm (CAA), workers have now relocated the Shuttle-era slidewire baskets support structure to a higher level on the Fixed Service Structure (FSS) on Pad 39A. Additionally, although it is not required for crew operations, SpaceX will soon cover the exterior of the FSS with metal panels to better protect the structure from the elements and rocket exhaust.
Previous work on 39A

In 2013, NASA began considering leasing Launch Pad 39A to commercial companies, as NASA had no use for it. At that time, the last launch from 39A was the final Shuttle flight, STS-135 on July 8, 2011.

NASA had talked with multiple potential users – notably SpaceX, Blue Origin and United Launch Alliance – about leasing the pad. NASA later chose SpaceX and signed a 20-year lease of 39A. 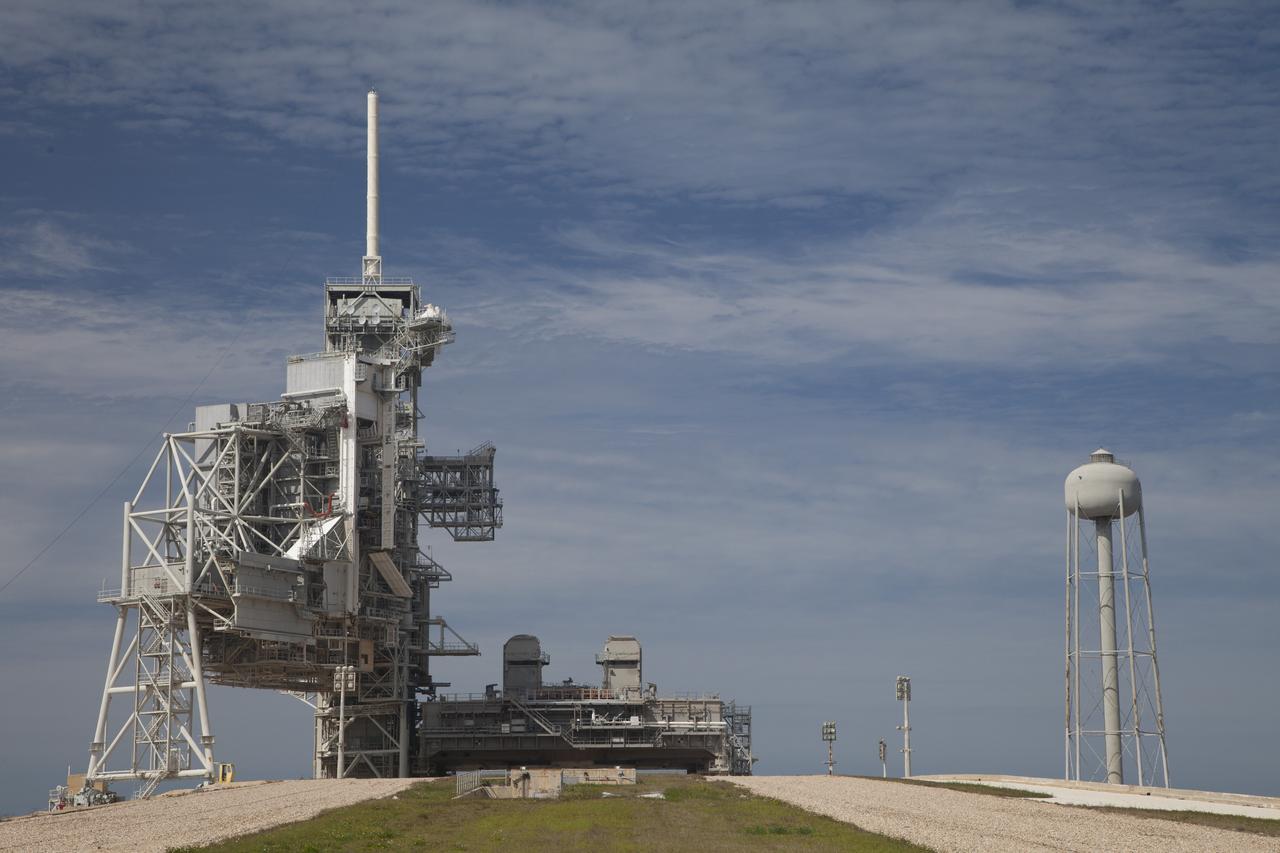 Launch Pad 39A in the configuration it was in throughout the Shuttle program. Credit: NASA

In late October 2014, soon after SpaceX leased Launch Pad 39A from NASA, they began modifying the pad to be able to launch their Falcon 9 and Falcon Heavy rockets.

These modifications included removing unneeded equipment and structures, – which later included the entire Rotating Service Structure (RSS), installing RP-1 tanks and fuel lines, and building a Horizontal Integration Facility (HIF) on the pad border to assemble and prepare Falcon 9 and Heavy rockets launching from 39A.

At first, 39A was going to be modified specifically for Falcon Heavy launches. The ability to launch Falcon 9 would have been added later, as that capability would eventually be needed to allow SpaceX to launch their Crew Dragon spacecraft.

However, after the Amos-6 on-pad conflagration – which severely damaged SLC-40 and took it offline – SpaceX prioritized modifying 39A for Falcon 9 and temporarily postponed capability for Falcon Heavy in order to resume East Coast Falcon 9 launches as soon as possible.

After years of work, 39A returned to launch operations in February 2017 with the launch of CRS-10 on a Falcon 9 rocket.

Using the lessons learned from modifying both SLC-40 at Cape Canaveral and SLC-4E at Vandenberg AFB, California to launch the Falcon 9, SpaceX was able to make 39A much more streamlined for launches than the other Falcon 9 launch pads. 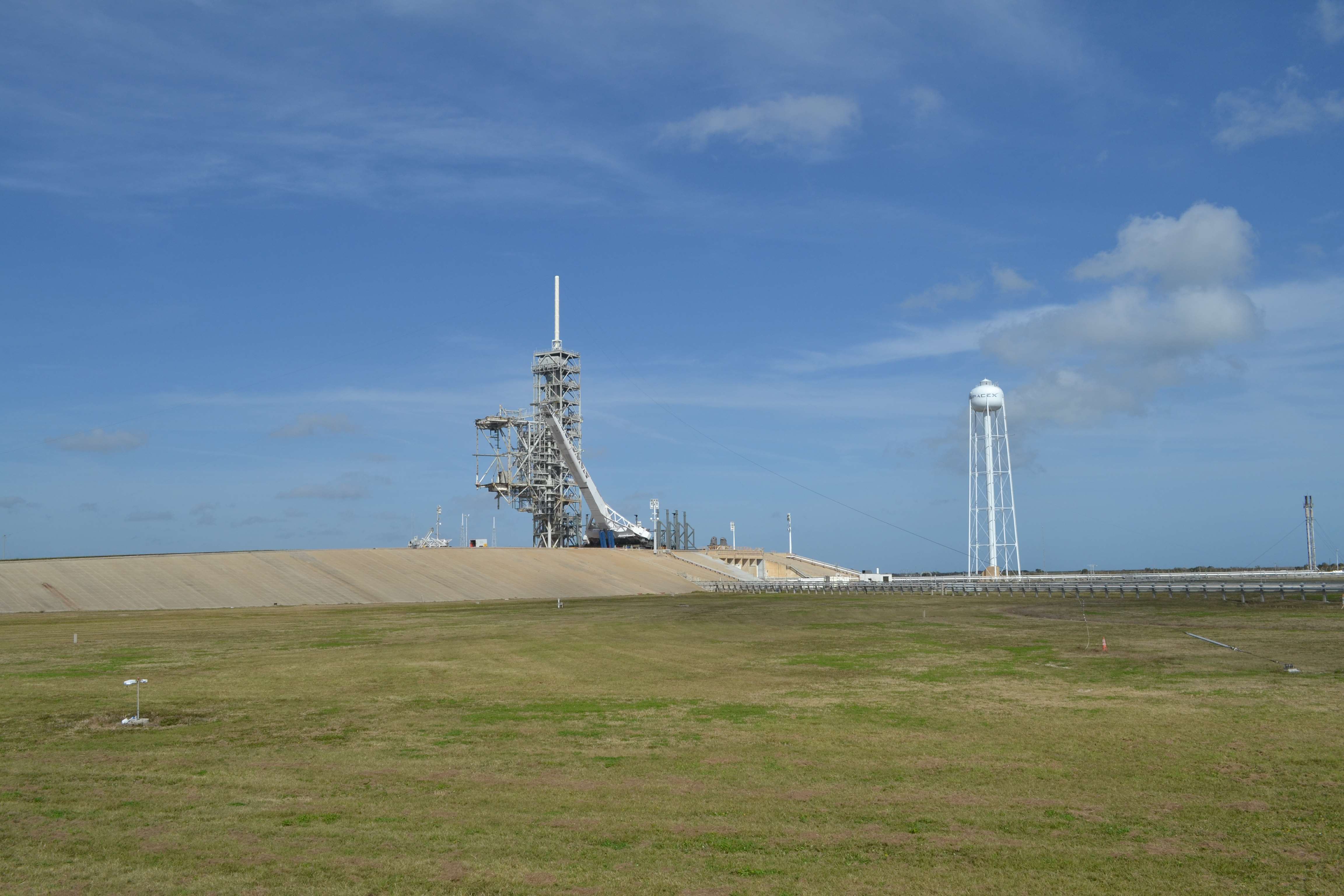 The strongback at 39A in throwback position after the Falcon Heavy demo flight. Credit: Jacqmans on NSF/L2

In between Falcon 9 launches at 39A, SpaceX worked on modifying the strongback in order to support Falcon Heavy. Also, they continued removing the Shuttle-era Rotating Service Structure piece-by-piece until it was completely removed in early April 2018.

After the Falcon Heavy demo flight on February 6, 2018, SpaceX reconfigured 39A back to Falcon 9 capability for the first Block 5 Falcon 9 launch, Bangabandhu-1, which launched on May 11, 2018. After that flight, all other East Coast Falcon 9 launches were relocated to one of SpaceX’s dedicated Falcon 9 pads, SLC-40.

This relocation allowed SpaceX’s construction team to focus on crew-related work on 39A without having to pause work before and during launches from the pad.

Recently, SpaceX built a new level on the FSS at 39A located between two existing levels in order to be able to mount the Crew Access Arm (CAA). 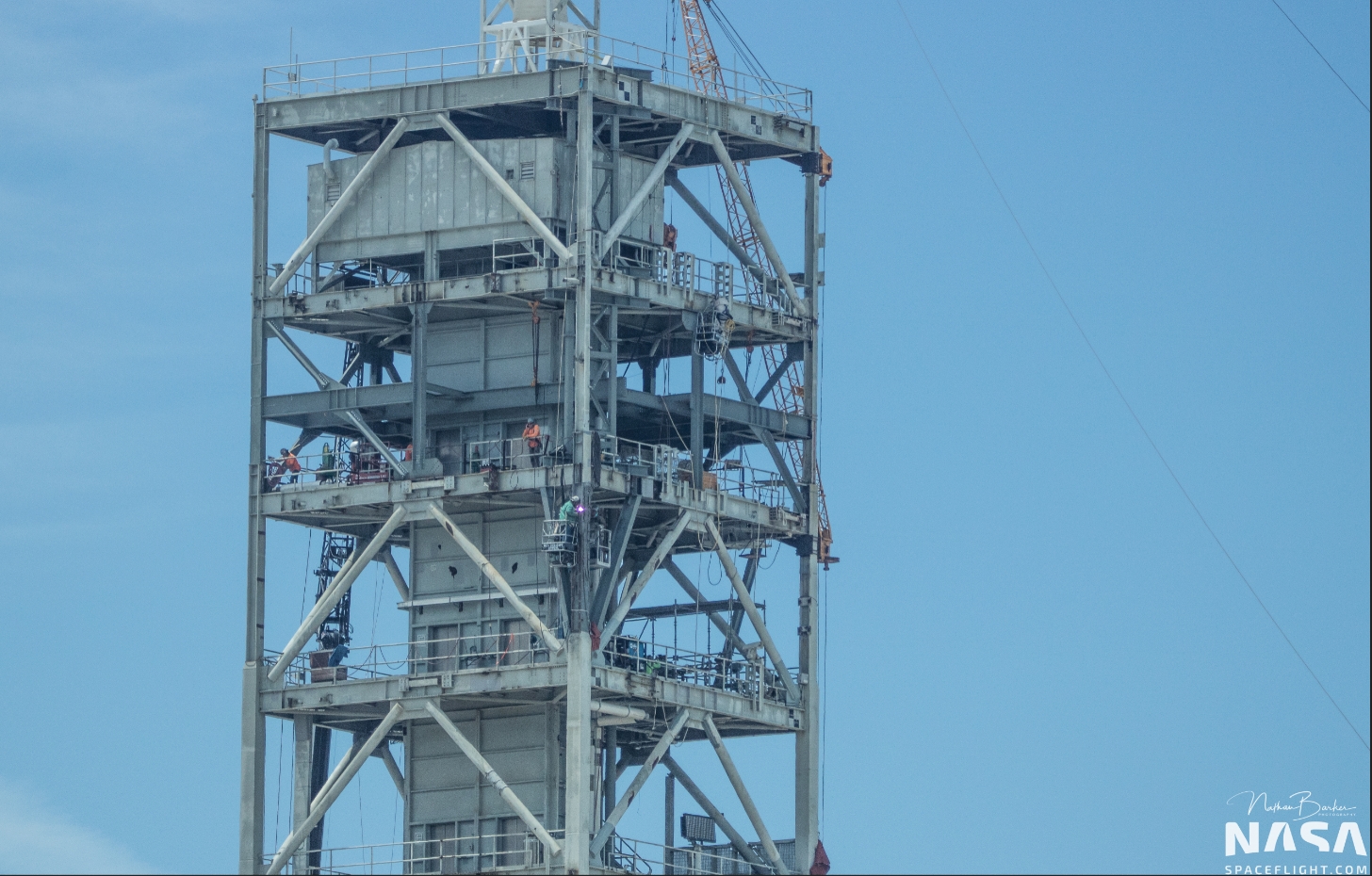 The new level being added to the 217 foot level of the Fixed Service Structure tower at LC-39A. (Credit: Nathan Barker for NSF/L2)

SpaceX’s CAA was under construction for many months, first starting off in a large tent near 39A, before being moved to a different tent inside the pad’s perimeter for final work.

On August 15, 2018, the CAA was moved from its tent at 39A to the pad’s surface to be prepared for installation. It was mounted on temporary supports used to keep it upright and stable on the ground, which were removed prior to installation.

After a few days of preparations and final checkouts, the CAA was installed on the FSS on August 20. 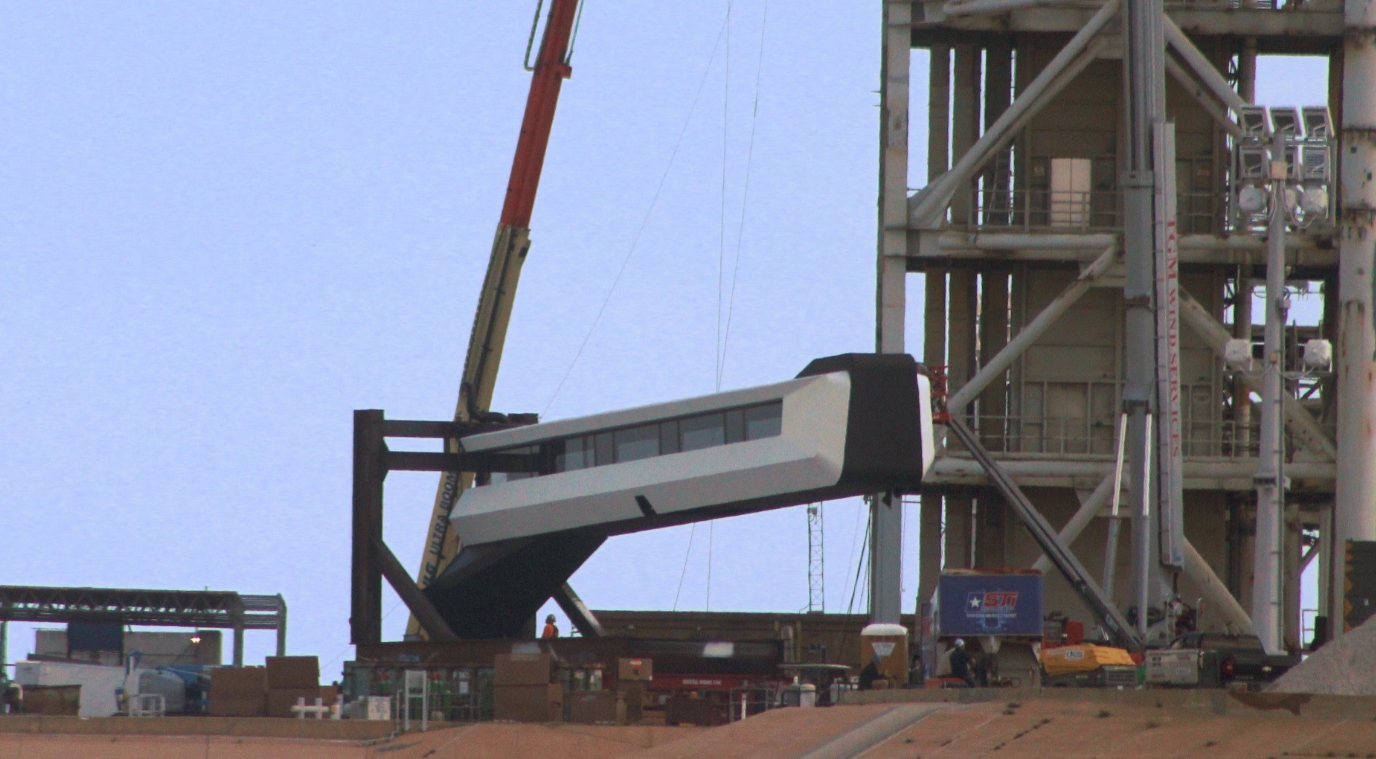 Now, SpaceX is moving on to clad the FSS with panels to better protect it from rocket exhaust and the elements. Although the FSS has faced no significant damage from launches – including the Falcon Heavy demo flight – it has been dirtied after each launch. The panels will help to reduce the amount of soot that is left on the tower after each launch.

The panels are planned to be installed in three stages, with each stage resulting in approximately one third of the tower being covered with the new panels. The first stage will likely cover the area around the Crew Access Arm.

Currently, some of the panels are being temporarily stored near the FSS as they await installation. There are claims that the cladding work could begin as early as next week, although no date is set in stone.

Ahead of installing new panels, SpaceX engineers have now raised the Shuttle-era slidewire escape baskets to a higher level on the FSS, allowing them to be used by the Crew Dragon astronauts and pad crews in case of an emergency. 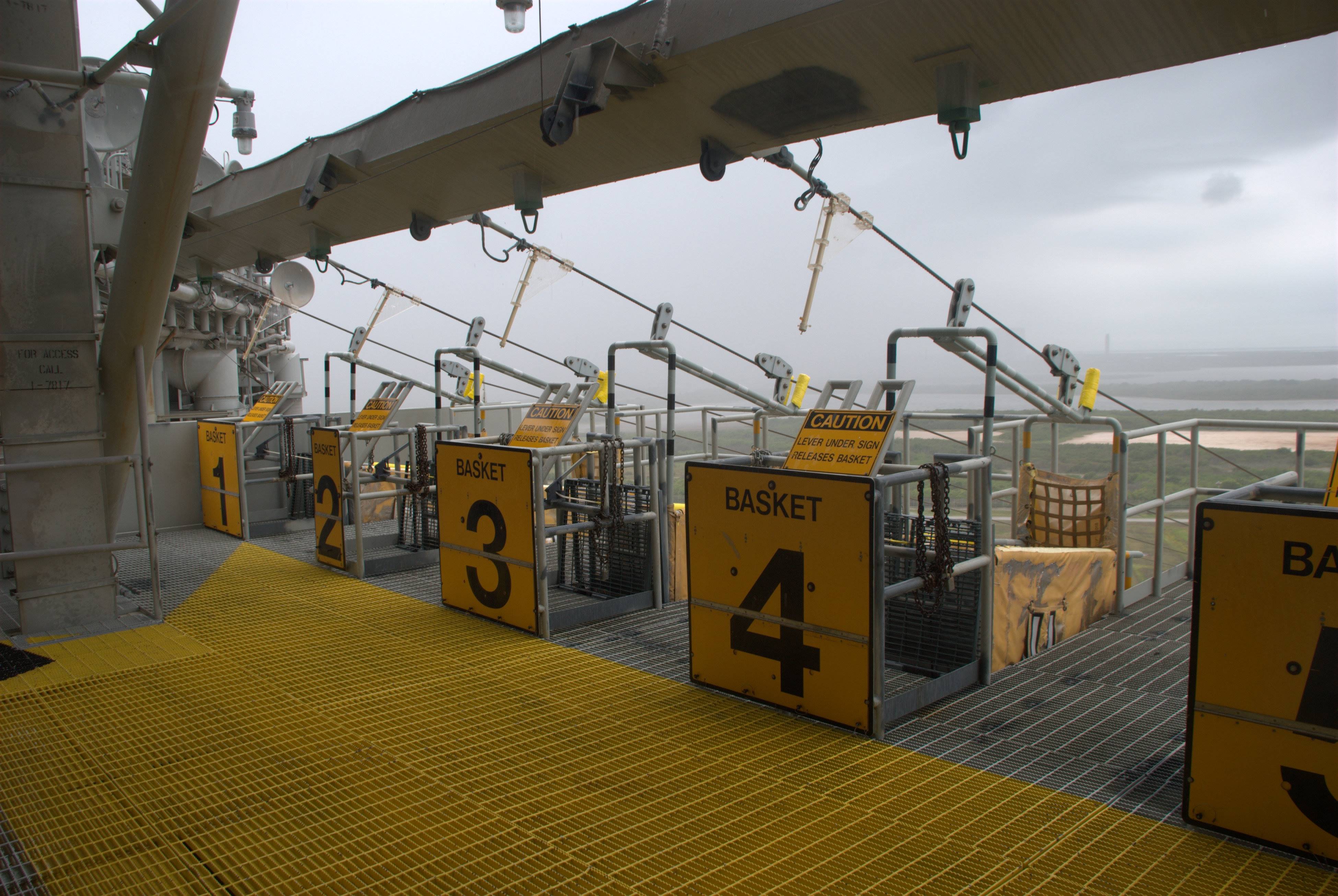 Four of the seven emergency slidewire escape baskets at 39A before the STS-135 Shuttle mission. They will soon be raised to a higher level on the FSS. Credit: User JayP for NSF/L2

The seven slidewire baskets – and their twins at Pad 39B – were used during the Shuttle program as an emergency escape system – or Emergency Egress System (EES) – for both Shuttle and ground crews.

They were used for tests and simulations of actual emergencies, but luckily were never required for a true emergency.

At the end of the lines is the entrance to an emergency bunker – also from the Shuttle program – where crews could stay in the event of an accident for up to 24 hours. 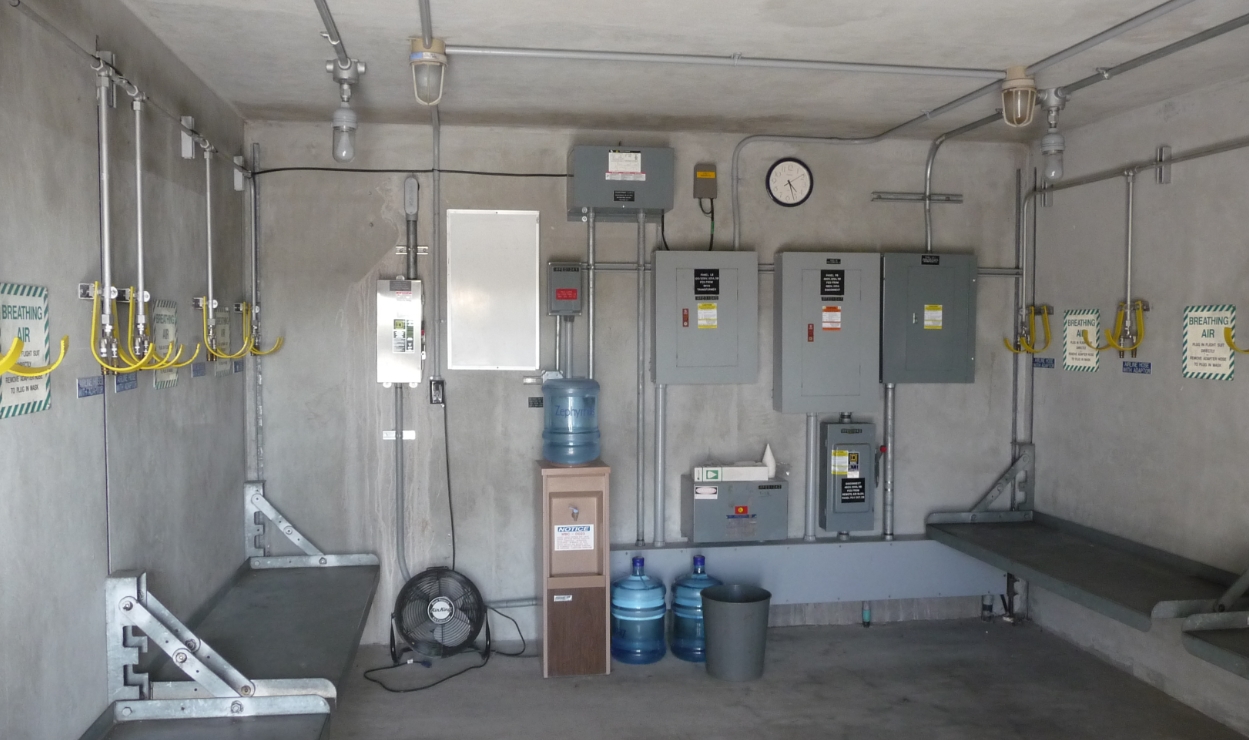 However, once the Crew Access Arm is rotated away from Crew Dragon, the only way of escaping in case of an emergency would be to use the built-in launch escape system to fly Crew Dragon and any astronauts inside to safety. Shortly after, the parachutes would deploy and Dragon would land in the ocean to be recovered. This capability was tested in SpaceX’s pad abort test in May 2015.

Should the schedules hold, DM-2 will be the first crewed orbital launch from the United States since STS-135, the final Space Shuttle mission.